Politics and boycotts come and go, but France is forever 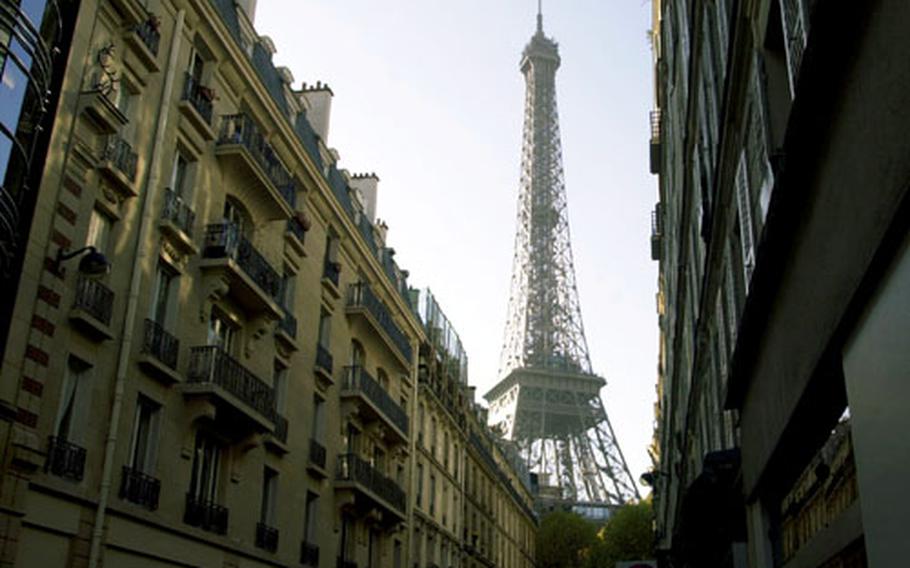 It seems sometimes that too much visual stimulation makes it impossible to relax in Paris, but this young man proves it’s possible. He grabbed a nap in the Tuilleries garden outside the Louvre during a rare sunny February day. The question is, does the surreal advertising campaign/art display from the Christian Lacroix haute couture atelier intrude into his dreams? (Terry Boyd / S&S) For the cost of a Red Roof Inn, you can get a cavernous room at a real chateau in Villersexel near Mulhouse. Dr. Chris Bryant, an American pediatrician and epidemiologist, shares a moment with her son, Jefferson. (Terry Boyd / S&S) 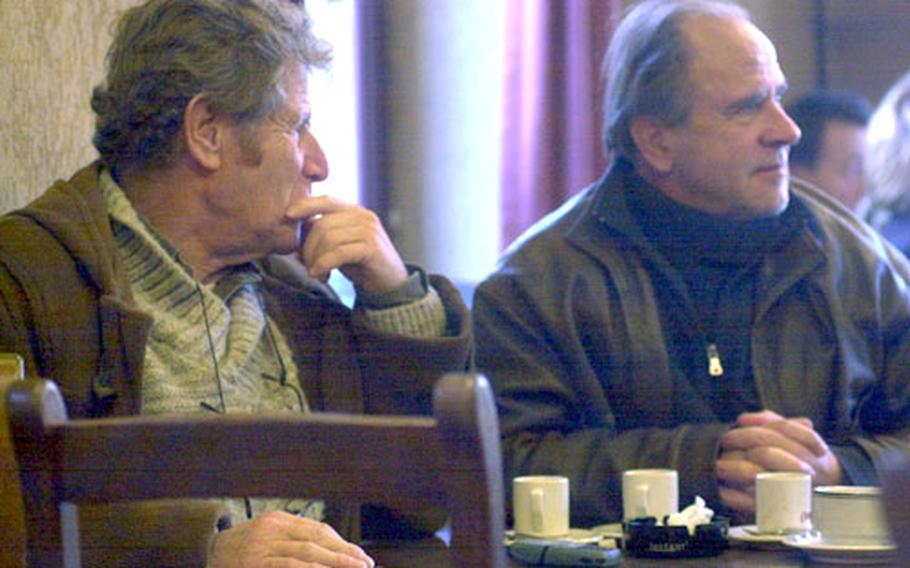 The cafes and bistros of France are giving way to chain restaurants. But in Belfort, a small town near the borders with France and Switzerland, the old ways are still in vogue. Here, two rather dapper gentlemen seem introspective as they warm up with espressos on a cold winter’s afternoon. (Terry Boyd / S&S) 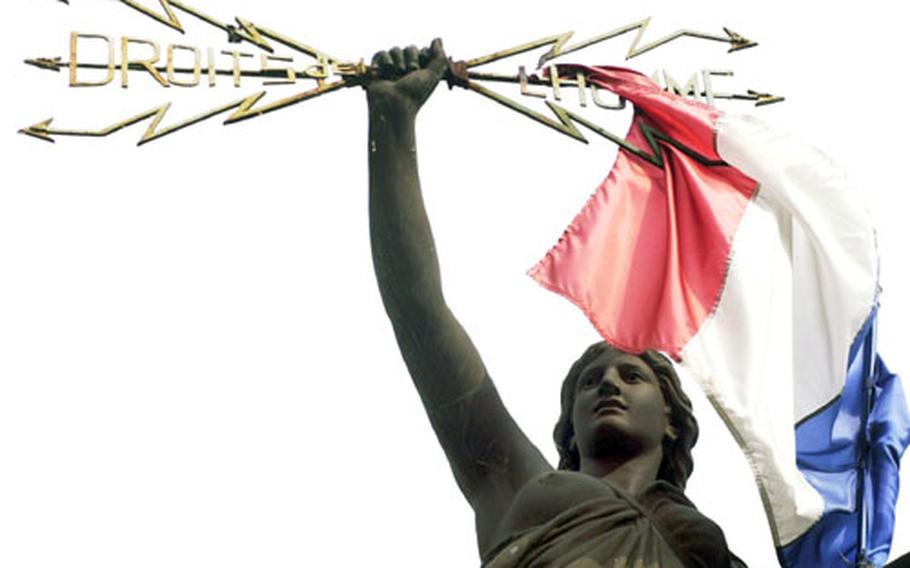 A statue of Marianne, the symbol of France, holds aloft lightning bolts with the words "Droits de l&#39;homme," or "rights of man." The statue is in the little town Pézenas, near Bezier in the Languedoc region of southwestern France. (Terry Boyd / S&S)

The middle of nowhere is ever-elusive &#8212; less a place than an uneasy sensation that you&#8217;ve gone too far to ever make it back to indoor plumbing and refrigerated beer.

It&#8217;s far easier to pinpoint the center of the civilized world.

Here in this revived palace &#8212; where the king was kicked out and the people invited in &#8212; is assembled the works of sculptors who magically captured in stone the most human themes of love, lust, wisdom, piety, loyalty, betrayal, slavery, brute force and, ultimately, the triumph of law and justice.

Perfectly spaced and naturally lit through a glass ceiling in the world&#8217;s most civilized building, the effect is euphoric. Surrounding the sculpture gardens are man&#8217;s most important works from the first sparks of civilization in Mesopotamia to the &#8220;Mona Lisa.&#8221; And surrounding the Louvre is a city that contains, by my count, 9.63 extraordinary experiences per block, from the Monets at the Mus&#233;e Marmottan to tea at the Paris Mosque to the hookers along Saint-Denis.

And Paris is just the beginning. France must have 20 intriguing cities, from Strasbourg on the east to Brest on the west, not to mention Europe&#8217;s highest mountain, Mont Blanc, and its lowest moral standards, in Saint Tropez.

Americans are ignoring it all. Across France, the number of American tourists has dropped about 30 percent between 2003, the start of the Iraq war, and 2004, according to French Tourism Ministry figures.

Jeanne Mauban and her husband, Phillippe, own Ferme de Vert Sainte-P&#233;re, a working horse farm and g&#238;te about 45 minutes northeast of Paris. Before Sept. 11, 2001, Americans made up at least 20 percent of her guests, Jeanne told me this spring. Now, she gets hardly any Americans, though her guest book in her elegant common room is filled with raves from English, Belgian, French, Swiss and even Japanese guests.

Americans also have gone missing 300 miles south in the Franche-Compt&#233; region, near the border with Germany and Switzerland.

In a typical year, she might host 30 to 50 Americans, said Astrid Elbert, who runs Les Montanjus, a bed-and-breakfast on a slope above the little town of Etueffont.

A hundred miles away at his chateau in Villersexel, Baron Jean-Pierre Potet wonders what&#8217;s going on: &#8220;Would we let these little orages end 230 years of friendship?&#8221;

Is it politics? Qui peut dire?

There is still an active boycott going on (reference www.francesucks.com), though it seems comical. This just in on www.boycottwatch.com: (boycotted) French&#8217;s mustard is actually made in Rochester, N.Y.!

The boycott hasn&#8217;t made much of an impact on French tourism overall. France is still the No. 1 travel destination in the world, with 75.1 million visitors each year, according to 2004 statistics from the French Travel Bureau. (The U.S. was third, with 46.1 million.)

You can still occasionally pick out Americans in the lines for the elevator to the top of the Eiffel Tower, and at Disneyland Resort Paris. But since the war in Iraq started in March 2003, Americans have gone from a significant portion of visitors in France to being so rare they&#8217;re almost a novelty outside Disneyland.

In France last year, Americans made up one of the smallest percentages of visitors, eighth on the list of nationalities at only 3.5 percent. The ones who do visit seem intent on making up for the rest, with Americans accounting for a 12.6 percent of French tourism revenue, the second largest percentage behind Brits.

Politics don&#8217;t change the fact that France is the world&#8217;s ultra-civilizing experience. Fashion starts on the streets of Paris&#8217; chic arrondissements, then ripples out to Milan, New York and Tokyo. So does cuisine. As good as they are, California&#8217;s vineyards never quite match the magnificence of Petrus, Chateau Margeaux or Chateau Neuf des Papes. For what you&#8217;d pay for a night at the Red Roof Inn with a view of the interstate, you can stay at a real castle or a chateau nearly anywhere in France, from the Loire Valley to the Pyrenees.

Red Staters can&#8217;t wait to tell me &#8220;the French were mean to me&#8221; stories. Pierre at the bistro corrected my high school French. Madam at the boutique made fun of my sweat pants. Thierry, the sommelier, tried to intimidate me when I ordered wine.

It happens, but I&#8217;m always ready with an anecdote antidote:

The Parisians in the Metro who rushed to help us with our luggage and our then-20-month-old daughter, Lucy. The people who offered to give up their seats to my wife and 2-year-old daughter, Lale, as we rode the bus from the Eiffel Tower to Ile de St. Louis. The man who walked blocks to make certain we found our way through Marais. The guy at the little restaurant along a river near Besan&#231;on who served the best steaks and table wine, and who told us proudly about all his American friends who had somehow stumbled on his little place. They owner of the fabulous cave in Bassanel who spilled Minervois on my wife and friend Kris Bryant because they were all giddy from the wine.

The Pasquier family in Paris, who made our stay a family affair, with good food, wine and conversation late into the night, then worked up elaborate itineraries, Metro instructions and suggestions the next morning for each day&#8217;s trip into the city.

Astrid and Daniel Elbert, who presented my daughters with gifts on Easter morning.

Intrigued by a French-speaking American, he took to calling me &#8220;The Big Spy,&#8221; and my friend Oscar Bryant III, &#8220;the Little Spy.&#8221; He gave our families rooms the size of large apartments, then took us on the grand tour of his chateau the next day, complete with a peek at his family treasures and a narrative about his uncle in the Resistance who died fighting the Nazis.

There are other places that are contenders for the center of the civilized world. Rome, though it has too many men wearing &#8220;wife beaters&#8221; for my tastes. Luxembourg, a postage-stamp of a nation alternating with Switzerland for the title of &#8220;world&#8217;s highest per-capita income,&#8221; has perfectly harnessed capitalism to provide comfortable lives for even the humblest of its 400,000 people. But it is a &#8220;fussy little country,&#8221; as my wife, Cheryl, says: a groomed poodle of a place, where too few men wear wife beaters.

The Scandinavian countries are beacons of civility in an increasingly anarchic world, but lack joie de vivre. You could make a pitch for Britain. But with its rigid class structure topped by queens, dukes and viscounts and other residue of empire, I say, &#8220;Non, merci.&#8221;

I will concede this much: It&#8217;s true that because of its contrary politics, no country tries the patience of those who love it more than France. The irony is that Jacques Chirac, Europe&#8217;s most conservative leader, detests President Bush, who is allied with Tony Blair, Europe&#8217;s most liberal.

As for French haters, what&#8217;s really motivating them is a burning conviction there&#8217;s nothing worth seeing outside the United States. Believe it or not, there are a lot of Europeans, even French, who&#8217;d agree that the States are tops. But no one ever enriched his life by making his world smaller. And they&#8217;ve conveniently forgotten how France has improved almost everything good about America, from the food we eat to the English we speak.

Am I a snob and a Francophile? No, worse. A romantic. A traveler whose view is closer to cinematic fantasy than naked reality; my memories of France selective, and heavily edited.