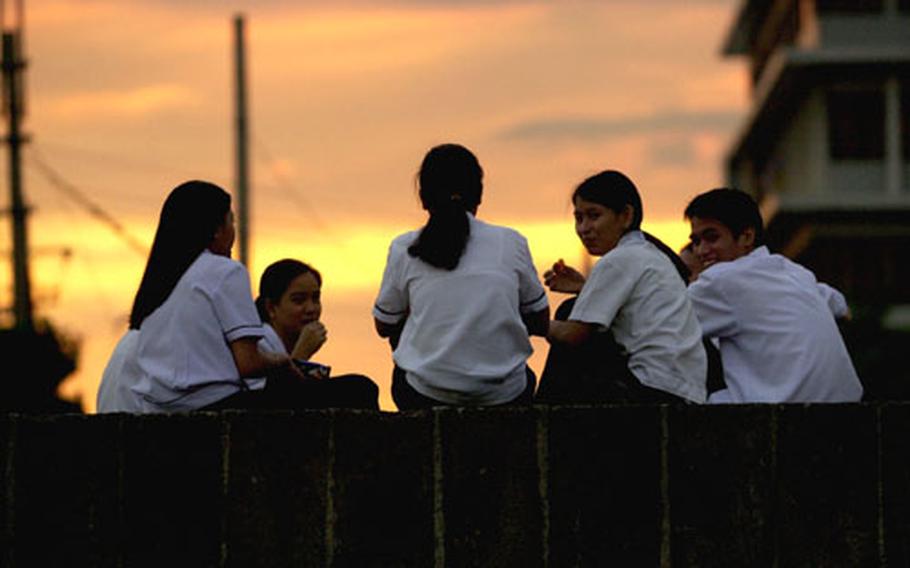 Philippine high school students enjoy some snacks and chat as the sun sets on the walled city of Intramuros in Manila. Below: A majestic view of one of St. Augustine Church’s chandeliers and the arched ceiling in its main sanctuary. (Jim Schulz / S&S)

Philippine high school students enjoy some snacks and chat as the sun sets on the walled city of Intramuros in Manila. Below: A majestic view of one of St. Augustine Church’s chandeliers and the arched ceiling in its main sanctuary. (Jim Schulz / S&S) 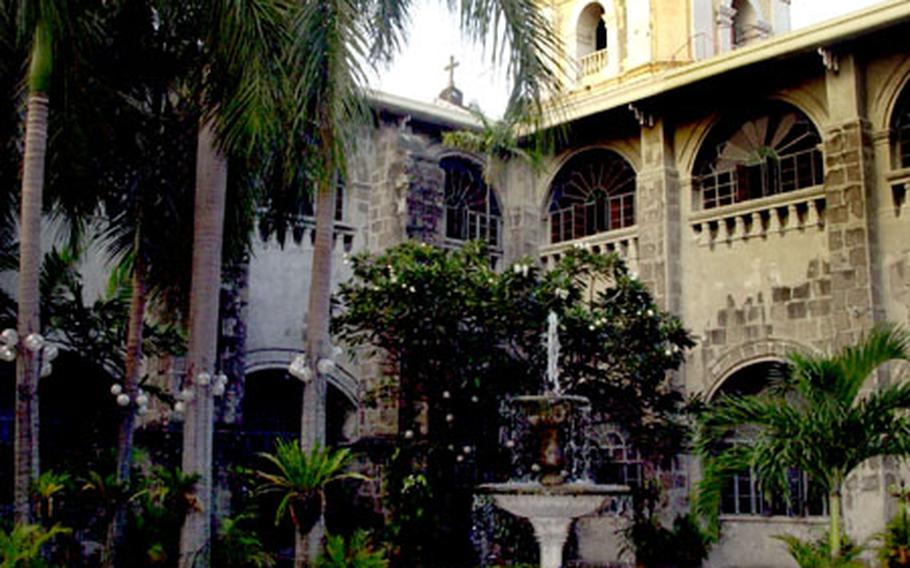 Right: Sit and enjoy the courtyard of the St. Augustine Church, looking at the palm trees and the bell tower. (Jim Schulz / S&S) 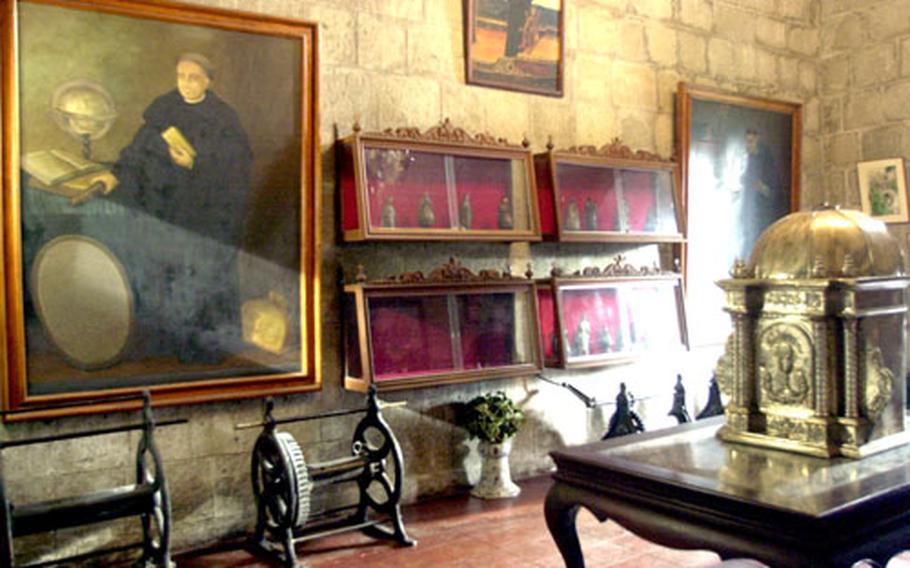 Religious paintings and artifacts give you a glimpse in the past at the St. Augustin church. (Jim Schulz / S&S) 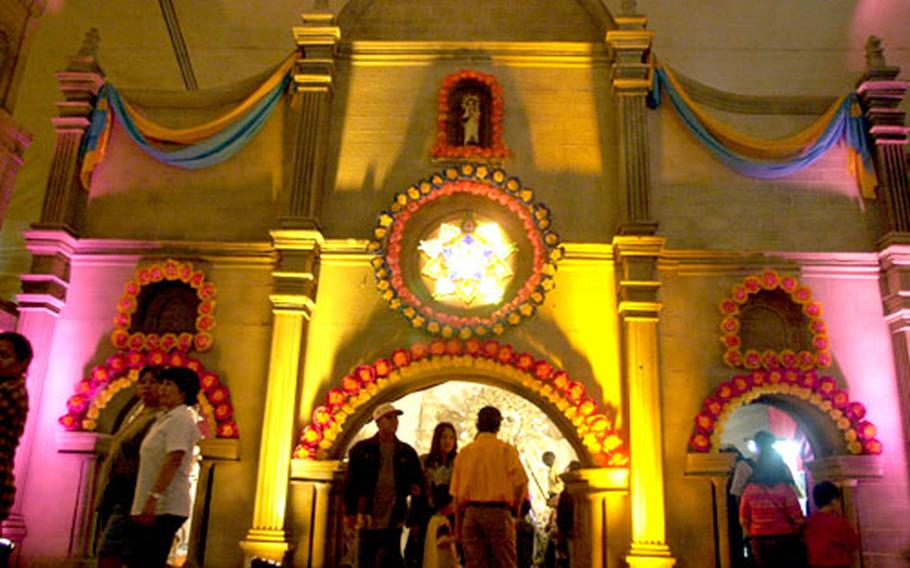 In a shopping area colorful lights light up a store, which looks like a Spanish fort. (Jim Schulz / S&S) 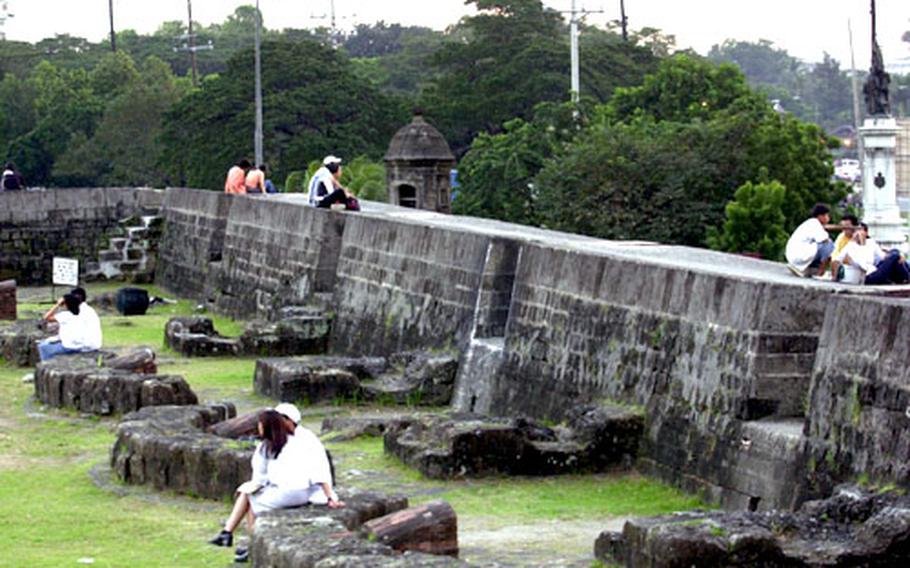 Along the walls of Intramuros in old Manila, couples relax and enjoy the warm evening. (Jim Schulz / S&S)

At dusk, clusters of shell lanterns dangle from trees, sprinkling light onto cobblestones. Under the soft glow of street lamps, dinner tables dot the streets.

The thick walls of the city of Intramuros have encircled some key pieces of Manila&rsquo;s history.

The historic walled city in Manila reminds Philippine citizens of their struggle for freedom. Intramuros served as the Spanish capital in Asia, the U.S. colonial headquarters in the Philippines and a Pacific allied headquarters following World War II.

The Spanish executed Jose Rizal, the Philippine doctor and philosopher who sparked the struggle for independence, in 1896 in the fort here. Thousands of Philippine laborers and freedom fighters were imprisoned in its dungeons.

Friends and couples regularly gather along the thick walls to watch the sun set &mdash; and perhaps also to visit the festival du jour: The government&rsquo;s tourism department proclaims there is a festival every day within the city&rsquo;s heavy walls.

To the northwest is Fort Santiago, where Rizal was executed. It&rsquo;s on the opposite side of the city from Rizal Park, named in his honor. The fort and dungeons are among the city&rsquo;s oldest fortifications, according to tourism officials. The Spanish started the fort when they settled Intramuros in 1571 and completed it 150 years later.

The fort area also is known as the &ldquo;Shrine of Freedom,&rdquo; to commemorate the thousands of Philippine citizens imprisoned and killed there first by the Spanish, then by the Japanese during World War II.

Other buildings are geared for education, including the Museum of Light and Sound that opened in November, depicting the country&rsquo;s long road to independence.

The tourism office, which is open every day, sits under the ramparts at the Puerta de Santa Lucia, the Santa Lucia Street entrance. Through the gate is a golf course.

Back a few blocks and along Gen. Luna Street are the Manila Cathedral and St. Augustine Church &mdash; the oldest church and possibly oldest building in the Philippines. Both display elaborate Spanish colonial architecture.

St. Augustine is one of four Philippine Baroque Churches included in the UNESCO World Heritage List.

For about a dollar, visitors can explore the St. Augustine Museum attached to the ornate cathedral, to walk the arched corridors and view catacombs and famous religious items from 400 years.

After hours, Gen. Luna Street is closed to traffic and springs to life with tables and buffets for relaxing diners.

Beyond Gen. Luna Street, the city stretches several blocks in each direction, leading to old ramparts where visitors can climb the walls to view the city or the sunset.

Intramuros&rsquo; attraction comes in part from small details throughout, such as intricate tile work, carved wooden doors and statues.

In the evenings, when the hot days begin to cool, the city is a haven for strolling cobblestone streets, watching festival parades, shopping for handicrafts and tasting Philippine foods.

The city has been restored several times, including in 1898 when the United States colonized the city, and again after World War II. In the 1950s, the country began preserving the area to keep its historic structures intact, Loza said.

Americans may find Intramuros interesting for several reasons. According to Loza, the terms of surrender ending the Spanish-American war were crafted here.

Gen. Douglas MacArthur established some U.S. Army Forces here during and after World War II. A bronze statue of the general sits casually along one of the rampart walls.

Intramuros is a short drive from the U.S. Embassy on Roxas Boulevard or about 45 minutes from the popular tourist area of Makati. A taxi will cost a few dollars.

While the area has many police and tourism officials scattered around, visitors are advised to use caution and watch out for petty theft. It is generally safe to visit in the evening.

For more information about the Philippines, visit: www.wowphilippines.com.ph or www.tourism.gov.ph/intramuros/intramuros.htm.

Since the U.S. bases in the Philippines closed a decade ago, tourism among servicemembers has plunged. But servicemembers on leave are allowed to visit the country with command permission if they fulfill several requirements.

According to Pacific Command rules, servicemembers must do the following to get leave approved:

1) Be able to show the Leave Approving Authority that they have completed anti-terrorism Level 1 training within one year of travel.

3) Identify someone to satisfy the &ldquo;buddy rule.&rdquo; Another servicemember, family member or others can qualify. Additional information and the necessary forms are available at:http://www.pacom.mil/staff/at/atpredep.shtml

4) Servicemembers must also meet the requirements of the host nation, such as having a valid passport.

Americans should use caution in the country, notably in the area near Mount Pinatubo in Pampanga Province and in the southern islands of Mindanao and the Sulu Archipelago. According to the U.S. state department: the terrorist threat remains high and the embassy in Manila continues to receive reports of terrorist activities in the country.