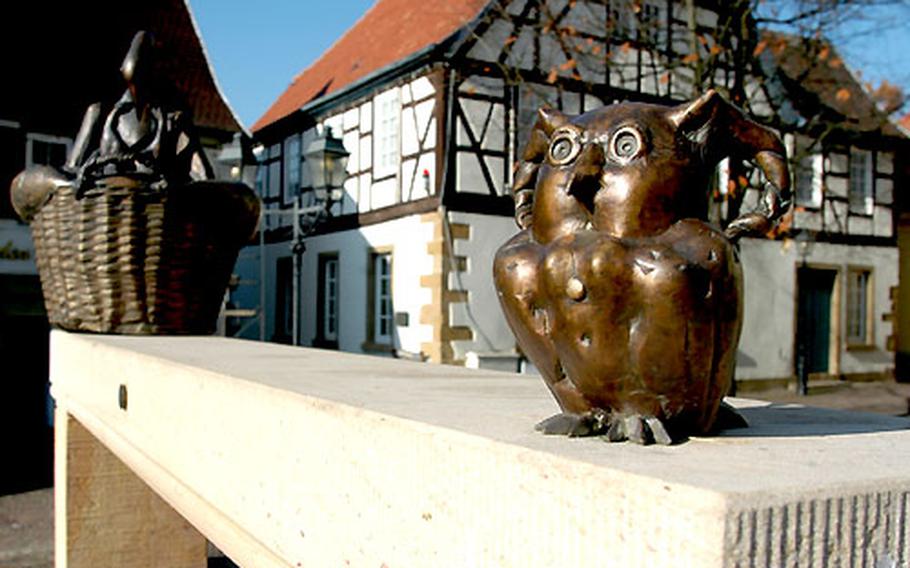 Figures of an owl and a basket of feeding birds top a statue on Rockenhausen’s market square. (Michael Abrams / S&S)

Figures of an owl and a basket of feeding birds top a statue on Rockenhausen’s market square. (Michael Abrams / S&S) 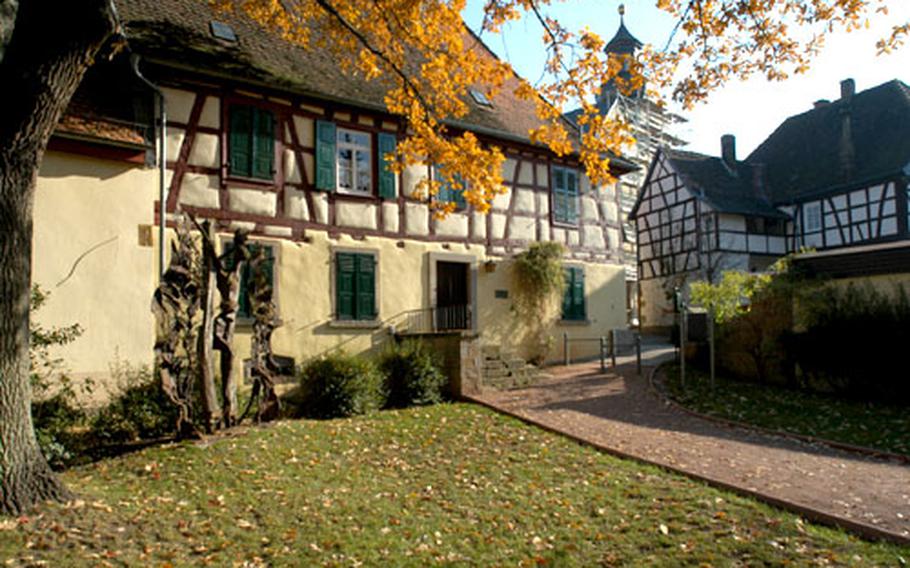 A view of Rockenhausen, Germany with the old farmhouse that houses the Turmuhrmuseum (Tower clock museum), the church and the Kahnweilerhaus, now a museum. (Michael Abrams / S&S) 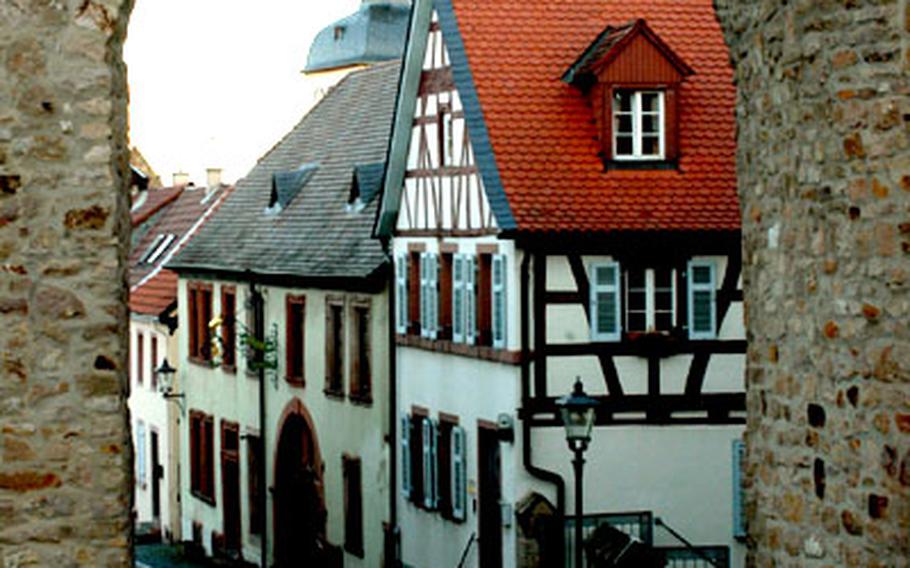 Looking at Kirchheimbolanden through a city gate, part of the town&#39;s medieval town wall. Only sections of it remain. (Michael Abrams / S&S) 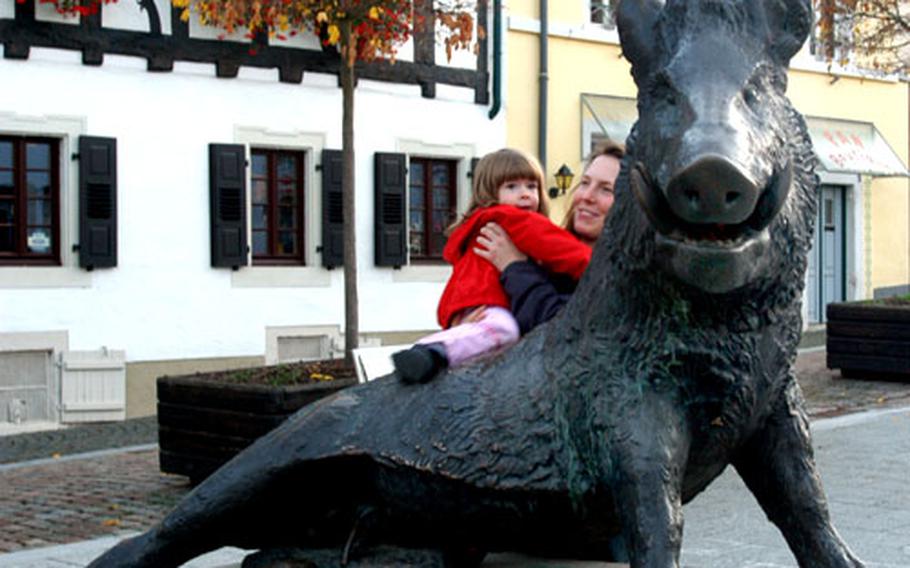 The boar is the symbol of Kirchheimbolanden, an old town in the Palatinate region. (Michael Abrams / S&S) 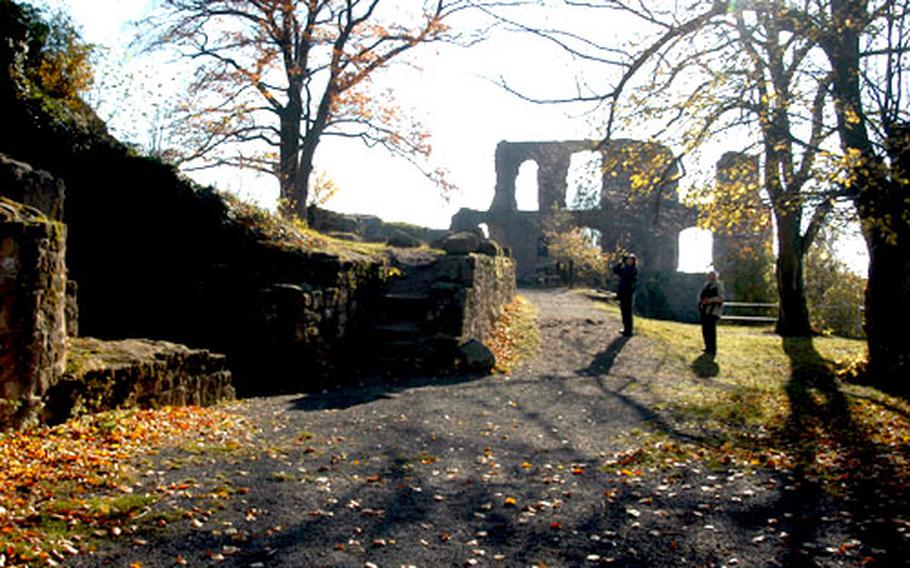 A view of the ruins of Falkenstein castle above the village of the same name. (Michael Abrams / S&S)

Whether they know it or not, many Americans stationed in Europe are familiar with the Pfalz region of Germany.

The state of Rheinland-Palatinate, the Pfalz, or Palatinate, is home to the Kaiserslautern Military Community.

Stretching roughly from the Rhine in the east to Kusel and Zweibr&uuml;cken in the west, and from Meisenheim in the north to the French border in the south, the Pfalz is a land of rolling hills, dark forests, vineyards, castles, churches and villages.

Most tourists visiting the area head toward the vineyards along the Deutsche Weinstrasse &mdash; or German wine road &mdash; with such towns as Bad D&uuml;rkheim and Neustadt, and its wine festivals.

Many also head south of Kaiserslautern to the Pf&auml;lzerwald, the hilly forest that reaches down to the Lorraine in France.

Not as many tourists head north, although they should. Here in the Donnersbergkreis (Kreis means county) there are also hills, castles, forests and quaint villages. The wine, though, has been mostly replaced by beer.

If you live nearby, the Donnersberg area in a nice place for a day trip, or if coming from farther away, to spend a weekend. There are plenty of hiking paths through the countryside and although it is hilly, it is very bikable.

Probably named after the Germanic god of thunder Donar, the Donnersberg is the highest elevation in the Pfalz at 2,263 feet. Not high as mountains go, but a nice steady climb on foot, bike or even by car. It is topped with a modern communication tower and a brick turret, the Ludwigsturm. When open, it offers good view of the surroundings.

Hiking paths crisscross the Donnersberg. One of them is the Keltenweg, or Celts&rsquo; path. Once upon a time, in the first century B.C., there was a Celtic ring wall on the Donnersberg. Remnants can still be seen and walked upon, and a small section has been reconstructed. The Keltenweg goes along the wall.

There are plenty of other paths on and around the Donnersberg, enough to keep you hiking all day. Here also are taverns and inns, including the Waldhaus Donnersberg, the Pfalz&rsquo;s highest restaurant, near the peak.

Long ago, the Romans settled in the area around Rockenhausen, west of the Donnersberg. Remains of a house were found here, as was the well now in the town&rsquo;s Nordpfalz museum.

Rockenhausen itself was first mentioned in the year 897. Like many towns in Germany, it went through a succession of rulers and owners. In 1620, during the Thirty Years War, it was occupied by the Spaniards and set aflame in 1632.

Today the town is a half-timber and cobblestone charmer, with squares and fountains and parks. There are a couple of museums in town, and one of them is the rather unique Turmuhrmuseum &mdash; or clock tower museum. It features clockworks that were once, as the name suggests, in church towers. The museum &mdash; open 3 to 5 p.m. Thursdays and the first Saturday of the month &mdash; also has a fascinating astronomical clock.

The town is popular with the art crowd and has more than the average number of galleries for a town its size.

If you are in Rockenhausen around lunchtime, check out the cafes and restaurants around the market square. During the week, most of them have nicely priced lunch specials.

High on a hillside stand the ruins of a once-mighty castle. Burg Falkenstein was built in the early 12th century and guarded the valley for the next 500 years. Over the ages, the castle was a subject of contention for local barons until the French captured it in 1647 and destroyed its walls.

There is not a lot to see there now, except its crumbling bastion. Still, it is a fun place to walk around and there is a great vista of the vale below. The view of the castle from Falkenstein village&rsquo;s cemetery is also worth your time.

Don&rsquo;t let the outskirts of Kirchheimbolanden fool you. What looks like an ugly industrial town on the outside is a small gem on the inside.

Remnants of medieval city walls surround baroque buildings on cobblestone streets in this town with a history that goes back more than 1,200 years. It was given its town rights by Emperor Charles IV in 1368. Twenty-five years later it fell to the Princes of Nassau-Weilburg who ruled over it for 400 years. They were the people who gave Kirchheimbolanden its baroque architecture in the 18th century.

Worth seeing are the old city walls with its two main towers, the Roter Turm and the Grauer Turm. Adjoining the wall is the Hochzeitszimmer, or wedding room, where newlyweds can spend the night after celebrating their nuptials in the Turmsaal, or tower room, below.

The wing remaining of the prince&rsquo;s palace is now a senior citizens home, but its park, the Schlosspark, is a nice place for a stroll. At the southern end of the old town stands a fountain that depicts the history of Kirchheimbolanden. It is topped by Mozart playing a church organ, which he did here in 1778. You can see the organ, now known as the Mozartorgel in the town&rsquo;s Paulskirche.

Where: The Pfalz (Palatinate), part of the German state of Rheinland-Palatinate, is in southwest Germany. The Donnersberg area is north of Kaiserslautern and Sembach. Kirchheimbolanden is just off Autobahn 63. Rockenhausen is on highway B48. The Donnersberg is between the two towns. Falkenstein castle is southwest of the mountain on the outskirts of the village of the same name. All places are fairly well marked by signs.

When: Visit any time of year. Each season brings its own charms. Dress accordingly, and snow or all-weather tires are a good idea for winter-weather driving.

Additional information: There are plenty of restaurants all over, and they are good places to try the regional specialties. Pf&auml;lzer Saumagen, a pig&rsquo;s belly stuffed with pork, potatoes and spices, then cooked (you don&rsquo;t eat the belly, just the stuffing) is the best-known and was usually on the menu when former Chancellor Helmut Kohl would entertain heads of state.

The Pfalz is known for its sausages, be it Bratwurst or Leberwurst (liver sausage). Leberkn&ouml;del are dumplings made with liver and bacon. Most of these dishes are served with sauerkraut. Game is also very good in the Pfalz. Wash it all down with a local wine or a locally brewed beer (Bischoff Pilsener is a good choice).

Packing a picnic is a fun alternative, weather permitting. Whether hiking, biking or driving, there are picnic tables scattered about the countryside.

If you live in the Kaiserslautern area, check out local bookstores for hiking and biking maps of the area.

Unfortunately there are almost no English-language Web sites for the towns and the area, but here are German sites:

Two other German-language Web sites for the Pfalz are: