Peacekeepers wrap up some crafts from Bosnia and Herzegovina Resad Koviljak etches Sarajevo motifs on a shell casing in his shop on Bascarsija, the old part of Sarajevo better known to Americans as the Turkish market. (Photos by Ivana Avramovic / S&S)

Resad Koviljak etches Sarajevo motifs on a shell casing in his shop on Bascarsija, the old part of Sarajevo better known to Americans as the Turkish market. (Photos by Ivana Avramovic / S&S) Rugs from table-mat size to full-floor size are made and sold at this organization formed to help Bosnian war widows make an income. () 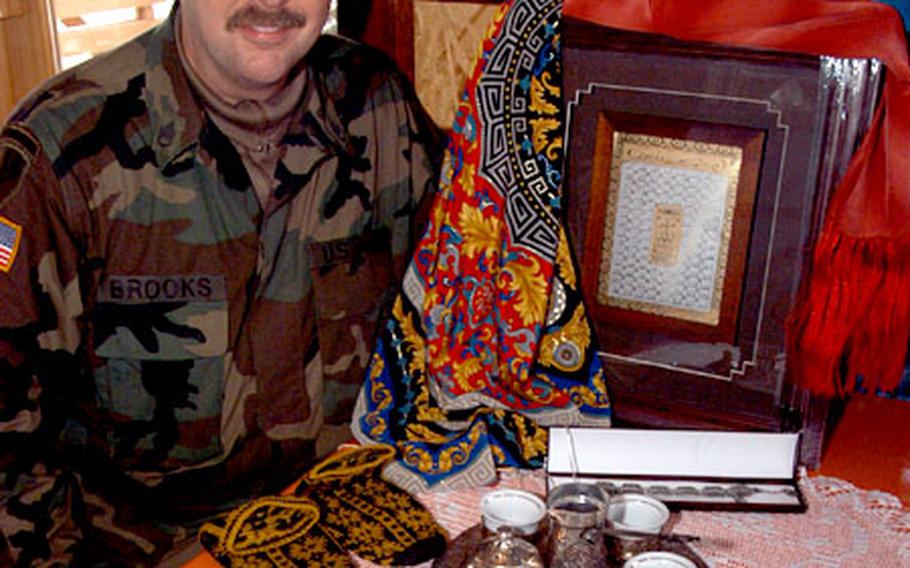 Staff Sgt. Richard Brooks of Task Force Renegade displays the gifts he bought in Bosnia for his family — a doily made by a woman from a refugee camp his task force sponsors, a traditional Bosnian copper coffee set with mini cups, silk scarves, woolen slipper-socks and a framed work of art with 99 names for Allah written in gold in Arabic. () 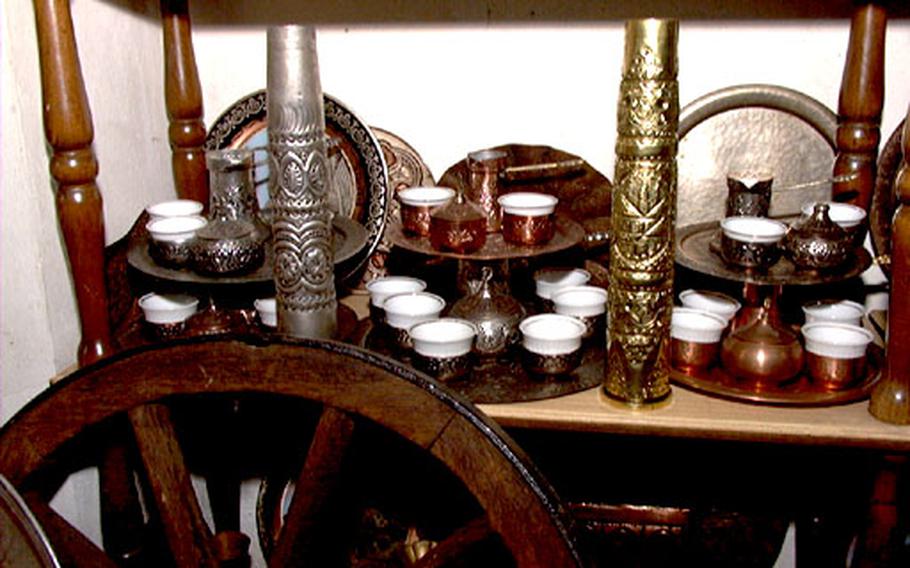 Handmade wool rugs are displayed at the store and workshop run by Bosfam (which stands for Bosnian Family) in Tuzla, as a worker creates another rug. ()

It&#8217;s the time of year that nonshoppers dread: Time to go out and try to find the perfect gifts for family, friends, relatives and co-workers when they don&#8217;t have the slightest idea of where to start.

While a shopping mall is the first place that comes to mind, it is not always available, especially to troops oversees.

So what do they do?

While some may think getting deployed to Bosnia and Herzegovina means they are in one of the last places on Earth to find good gifts, that is not the case. Soldiers from Task Force Renegade, the current crop of Stabilization Force peacekeepers, have discovered that Bosnia has some good finds.

Staff Sgt. Richard Brooks found gifts just right for his family in downtown Sarajevo. He went to a district called Bascarsija, which many soldiers know as the Turkish market or copper alley because of a section where copper coffee sets are made and sold.

A copper coffee set with mini-cups and intricate etched design that Brooks bought is used in Bosnia to brew and drink coffee. But those who would rather stick to their oversized mugs can still find good use for the set.

The Turkish market also has a selection of handmade copper vases, jewelry boxes and wooden boxes that, depending on size, can cost as little as $15.

Shoppers can also find the true Bosnia souvenir there &#8212; etched shell casings. The shells are remains from Bosnia&#8217;s 3&#189;-year civil war. They come in all sizes, and have been turned into art by Bosnian craftsmen who inherited the art of etching from their fathers and grandfathers and great-grandfathers, but are the first to work on shell casings.

You can still see the craftsmen working on the shells at their stores in the copper alley, but new ones are getting harder to find. Most of the casings on the hills around Sarajevo where artillery positions used to be have been collected in the eight years since the end of the war, turned into art and sold to mostly foreign souvenir shoppers. One store at the Turkish market boasts of selling several to former Secretary of State Madeleine Albright and former U.S. Ambassador to Bosnia Thomas Miller.

Brooks got help from his interpreter on his Sarajevo shopping spree. She helped him discover silk scarves so nice that this Bosnian reporter could not help but ask, &#8220;Where did you get those?&#8221;

And you do not have to be able to read Arabic to appreciate a framed work of art with 99 beautiful names for Allah that Brooks got for his brother, who studies religion.

The shopping districts of Sarajevo and Tuzla &#8212; two towns soldiers can visit on Morale Welfare and Recreation-organized day tours &#8212; are not the only places to find gifts.

Task Force Renegade is known at Eagle Base for its enthusiastic sponsorship of schools and refugee camps. On one of its trips to a refugee camp, Brooks found a coffee table doily made by a refugee woman. He knows that his sister, who likes making things by hand, will appreciate it.

&#8220;It&#8217;s a personal gift from me to her and it helps out the locals,&#8221; Brooks said. The money earned from the doilies is sometimes the only income for the refugees.

He plans to return to the refugee camp with thread to have more made.

Another good option is shopping at Bosfam, a store and workshop in Tuzla that stands for Bosnian Family and employs refugees. It produces traditional and custom-ordered rugs as well as sweaters and dresses that are popular with locals and foreigners alike.

For soldiers who cannot find the time or opportunity to shop off base, Army and Air Force Exchange Service concessionaires at the post exchange offer many of these items, plus crystal and porcelain made in other parts of Europe.

Still, Brooks was determined to shop for Bosnia-made gifts.

Then there is Spc. Gonzalo Correa. He &#8220;contributed&#8221; some $3,900 to the Hungarian economy during a rest and recuperation trip to Budapest.

During two days of marathon shopping, he bought religious gifts for his grandparents, porcelain dolls and Hungarian crystal for the girls in the family, and T-shirts with Hungarian writing on them for the boys.

And the wealth of new options has more than made up for the lack of American-type malls for Capt. Randall Stillinger, another member of Task Force Renegade.