Paris: Getting cozy with Purr-isians at Café des Chats A cat lies snuggly curled up in a bed at the Cafe des Chats, or Cat Cafe, in Paris. Patrons are asked not to disturb the cats while they are sleeping. (Leah Larkin/Special to Stars and Stripes)

A cat lies snuggly curled up in a bed at the Cafe des Chats, or Cat Cafe, in Paris. Patrons are asked not to disturb the cats while they are sleeping. (Leah Larkin/Special to Stars and Stripes) 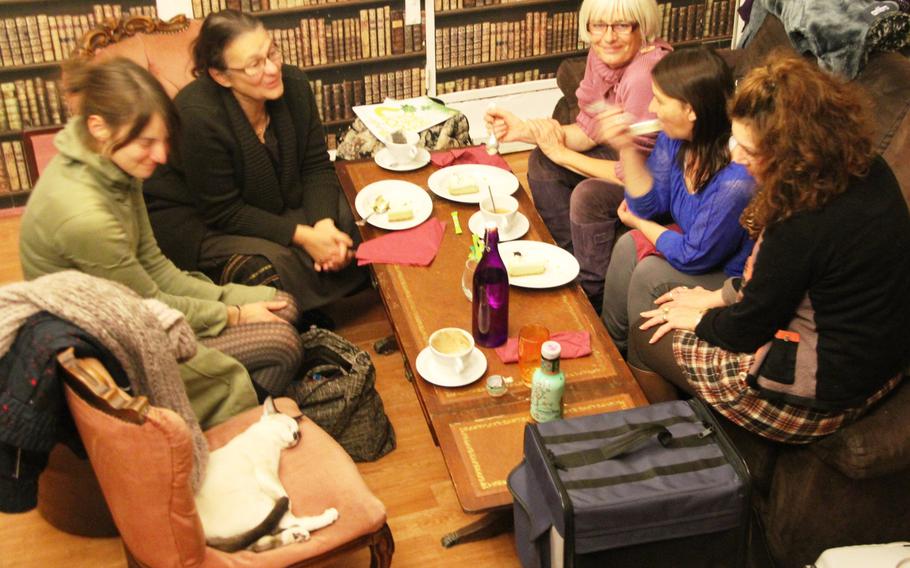 These patrons are more than happy to share their table with a cat at the Cafe des Chats, or Cat Cafe, in Paris. The cafe offers animal lovers the opportunity to socialize with felines while enjoying refreshments and light meals. (Leah Larkin/Special to Stars and Stripes) 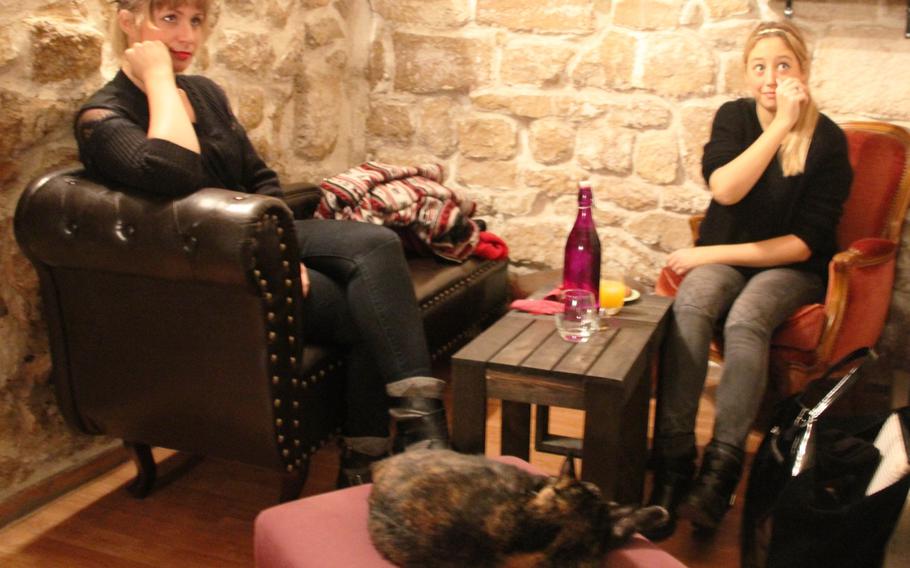 Customers enjoy refreshments as they share their space with a feline friend at Paris' Cafe des Chats. One of the rules, though: Don't feed the cats. (Leah Larkin/Special to Stars and Stripes) 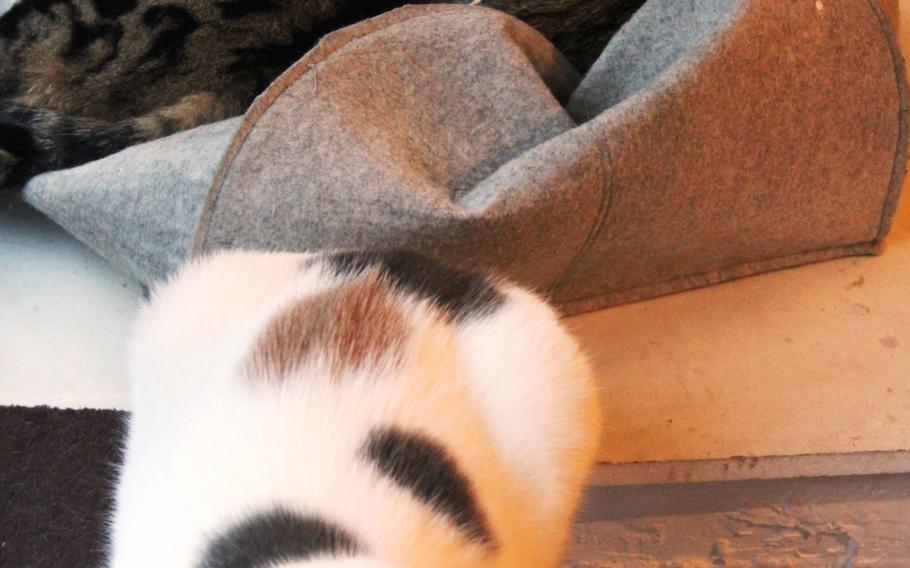 Cats lounge around in one of the rooms of the Cafe des Chats, or Cat Cafe, in Paris. (Leah Larkin/Special to Stars and Stripes) 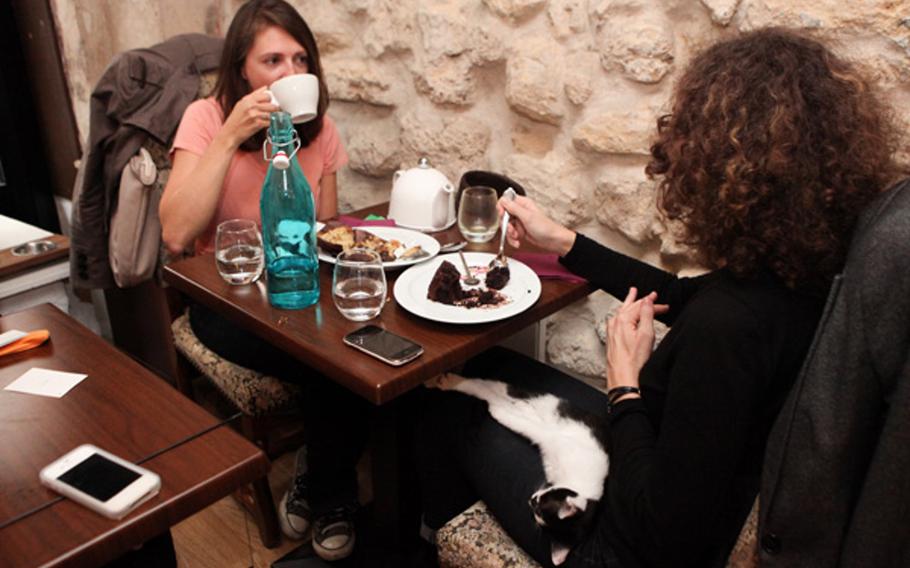 A cat lies in a customer's lap at the Cafe des Chats in Paris. In this cafe, customers interact with the resident felines, with only a few rules, such as don't feed the cats. (Courtesy Cafe des Chats) 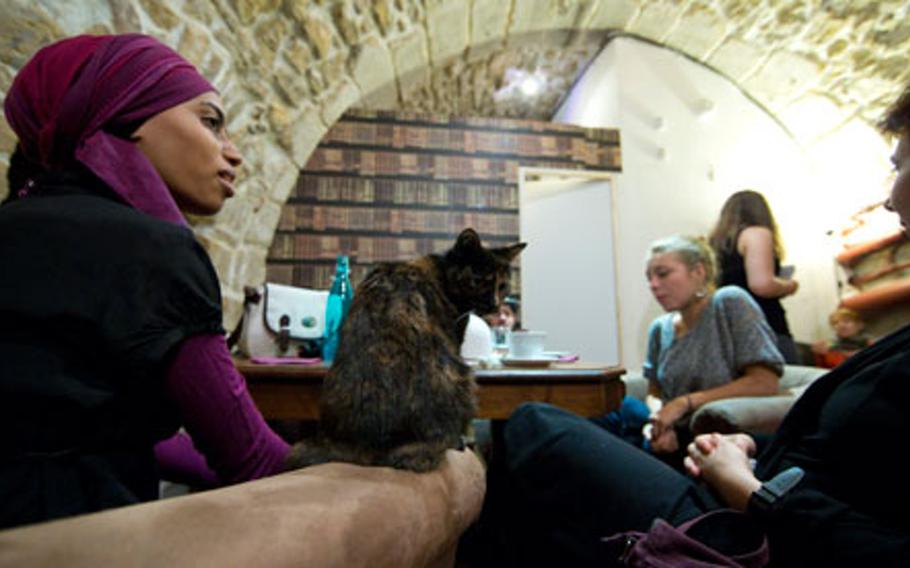 Felines, 12 of them, all colors and sizes, lounge in windows, on chairs, benches and in kitty beds. Some are sociable, others playful. But many are in deep slumber, the favorite cat pastime.

Welcome to Le Café des Chats (Cat Café) in the Marais district of Paris. This unusual eatery opened in September and is modeled after a similar cafe in Tokyo.

In Japan, the idea was to provide animal lovers who live in cramped city apartments and cannot have pets the opportunity to socialize with cats. Margaux Gandelon, founder and owner of the Parisian cafe, saw the need for such a place in her hometown.

She touts the health benefits of “purr therapy.”

“Purring produces vibrations, which relieve arthritis and rheumatism, which lower your blood pressure and your heartbeat,” she told a Reuters reporter.

And, according to numerous scientific studies, pets help protect against cancer by boosting the immune system.

Since I have three cats, I was not in need of purr therapy, but as a cat lover, I had to visit the cafe. Apparently many customers are like me — not just pet-starved Parisians.

“We get many Asians, Anglo-Saxons, people from all over France,” the cafe host told me. The popularity of sharing a coffee or a light meal with cats has been overwhelming.

The two-level cafe is small, with a capacity for just 45 customers. According to an article in a French newspaper, more than 300 potential patrons were turned away on opening day. Reservations are a must. There was nary an empty seat during my December visit.

The cafe’s host went over the rules as we arrived: Don’t feed the cats. Don’t let the cats drink from your cup or glass. Don’t disturb the cats if they are sleeping. Photos are allowed, but no flash. Before entering the rooms with the cats, you must disinfect your hands — a dispenser is on the counter.

Months of negotiations with Parisian health authorities preceded the cafe’s opening. Strict hygiene regulations are enforced. No cats in the kitchen. Waiters and kitchen staff are not permitted to touch the cats. Litter boxes are in a separate room.

The cats’ welfare is also foremost. All the cats come from pet rescue centers and are selected for their “sociability.” A veterinarian makes regular visits. The cats are not available for adoption and will make their home at the cafe “until they are no longer happy with us or simply getting too old and in need of rest and quiet,” said Anne-Sophie Brard, Gandelon’s mother, who helps at the cafe. At that time, they will be placed in a “loving home.”

“We work hand in hand with three associations (shelters and cat welfare organizations) and will soon use the cafe as a means to find caring homes for their lovely cats, angoras and strays,” said Brard.

My husband, known as Bicycle Bob, or BB, reluctantly accompanied me to the feline paradise. He claims to be a dog person and frequently lectures me on the superiority of canines. Ha! I have caught him talking baby talk to my kitties.

While he showed no interest in the cats, he liked the cafe’s ambience and food. The building dates to the 15th century, when it was an auberge (inn). Comfortable armchairs, couches and tables spread out in a series of small, cozy rooms — all under a vaulted ceiling in the lower level — make it seem more like a welcoming home than a restaurant. Of course, the cats add an extra homey touch.

Leah Larkin lives in France and can be contacted through her website, www.leahlarkin.com, or blog address, http://talesandtravel.com.