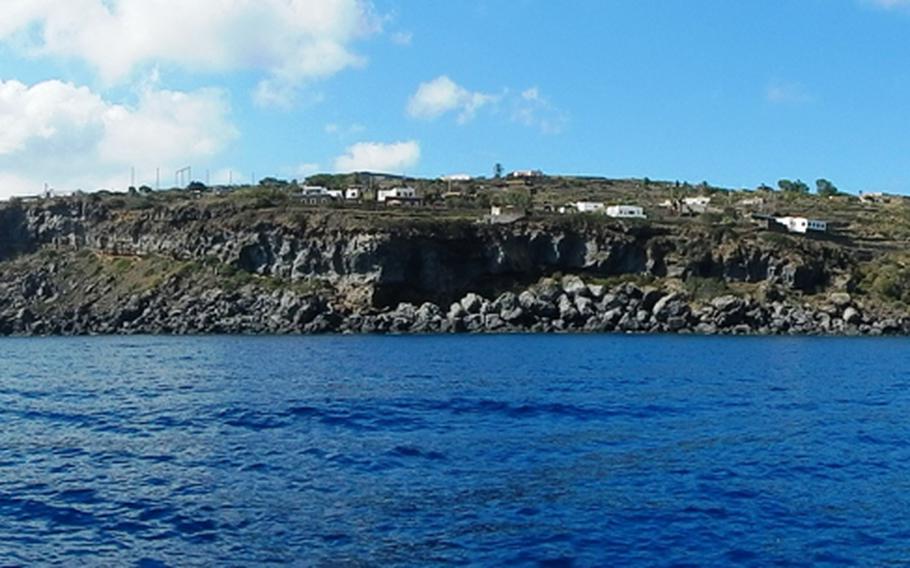 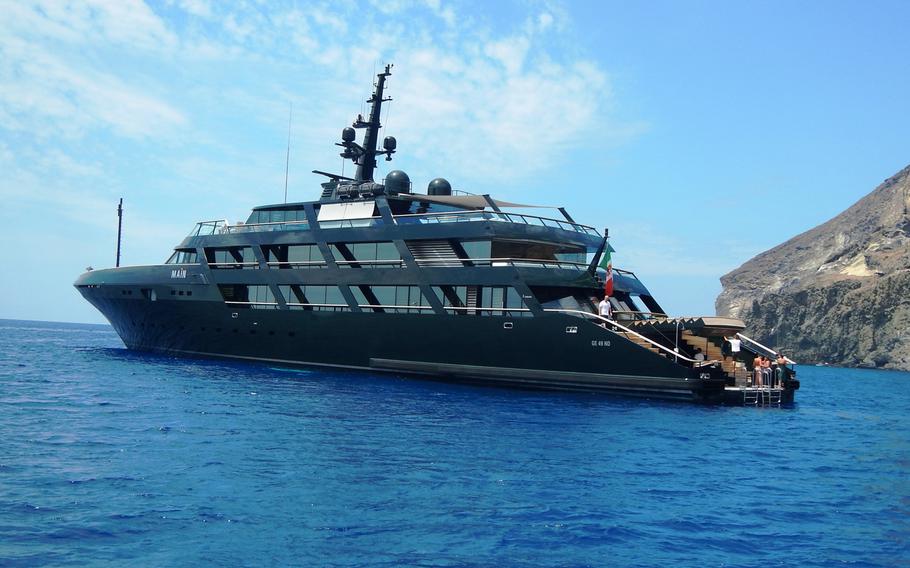 I spy top fashion designer Giorgio Armani's yacht. For real. No kidding. He also has a house on the island. Didn't spy Armani though. (Sandra Jontz/Stars and Stripes) Sunbathers scope out whatever flat spot they can to soak up sun along Pantelleria's rocky coastline. (Sandra Jontz/Stars and Stripes) 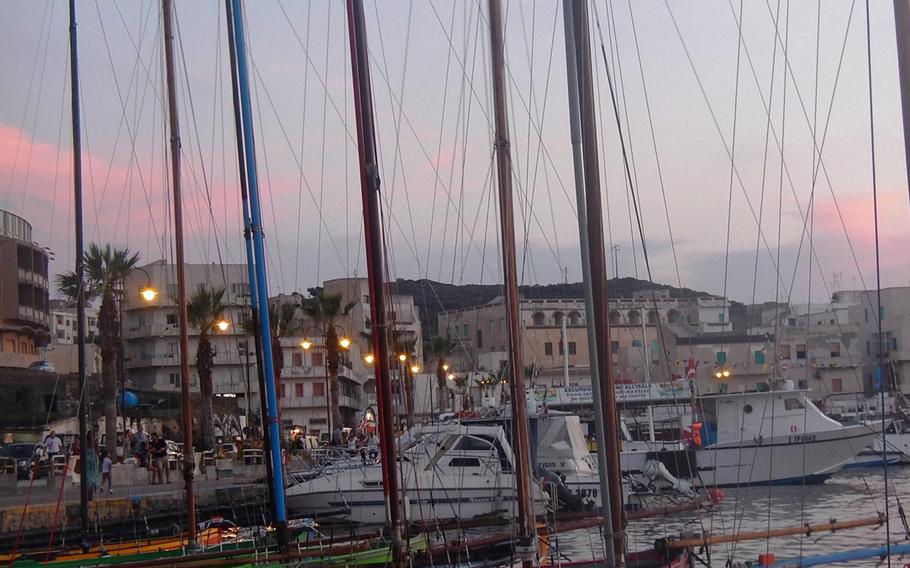 Boats in the harbor of Pantelleria --- the main town and island share the same name --- at sunset. (Sandra Jontz/Stars and Stripes) 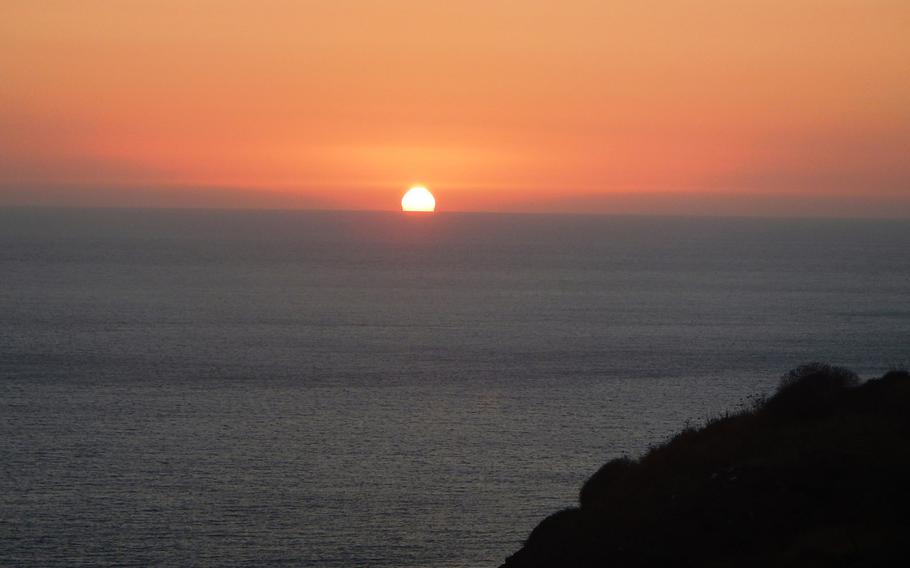 Sunset seen from the terrace of a "dammuso," the island's characteristic lava stone homes, rented just outside the town of Scauri, a hamlet on Pantelleria. (Sandra Jontz/Stars and Stripes) 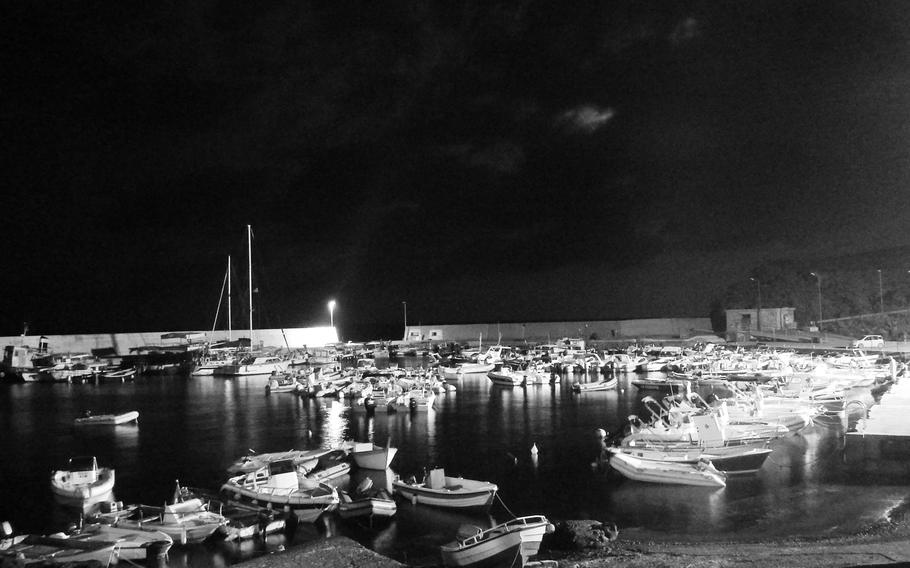 Boats in the harbor of Scauri. (Sandra Jontz/Stars and Stripes) 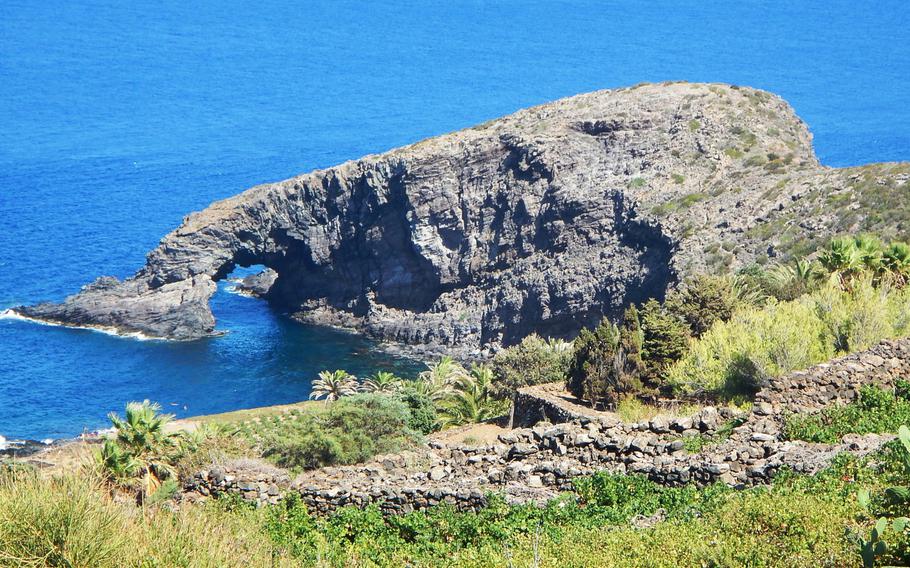 Pantelleria's famed Elephant Rock is a hallmark of the island's coastline. (Sandra Jontz/Stars and Stripes) Unspoiled, crystal-clear blue-green waters beckon visitors to the 32-square-mile volcanic Italian island of Pantelleria, located in the Strait of Sicily, 37 miles from Tunisia and 62 miles from Sicily. (Sandra Jontz/Stars and Stripes) Pantelleria Castle, called the black castle by locals, in the harbor town that shares the same name as the island, dates to the 16th century. It served as a bastion that defended the port and town entrance. (Sandra Jontz/Stars and Stripes) 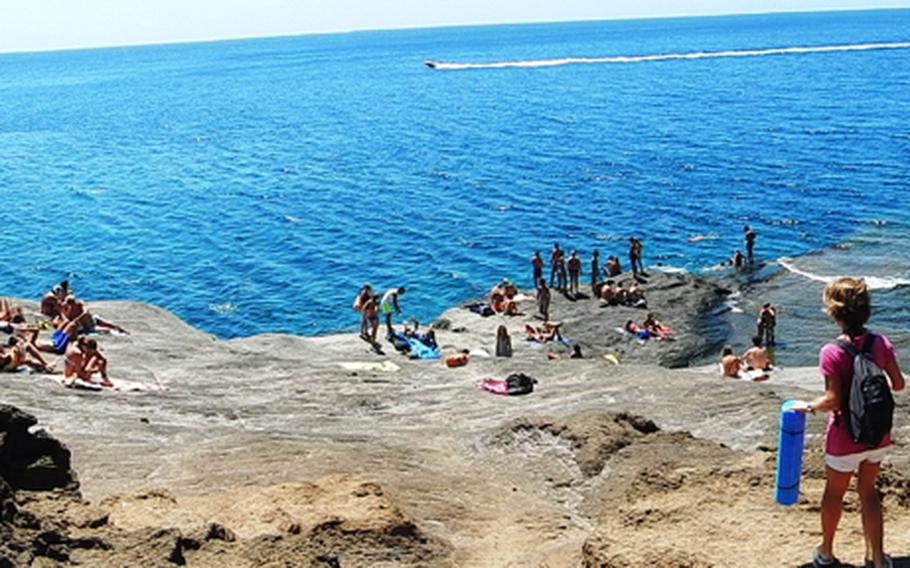 Sunbathers make their way down the rocky edge of Balata dei Turchi, one of the popular "beaches" of Pantelleria. Sunbathers do their best to scout out flat spots among the rocky coastline punctuated by lava rocks, small cliffs and craggy rock. (Sandra Jontz/Stars and Stripes) Surprisingly, perhaps, but Pantelleria is not known for its seafood dishes. It's a hunters island - primarily rabbit. It’s also known for its capers, which once grew wild but now are cultivated and make up a leading part of the island's agriculture. Popular too are almonds, sun-dried tomatoes, olive oil and prickly pears. (Sandra Jontz/Stars and Stripes) 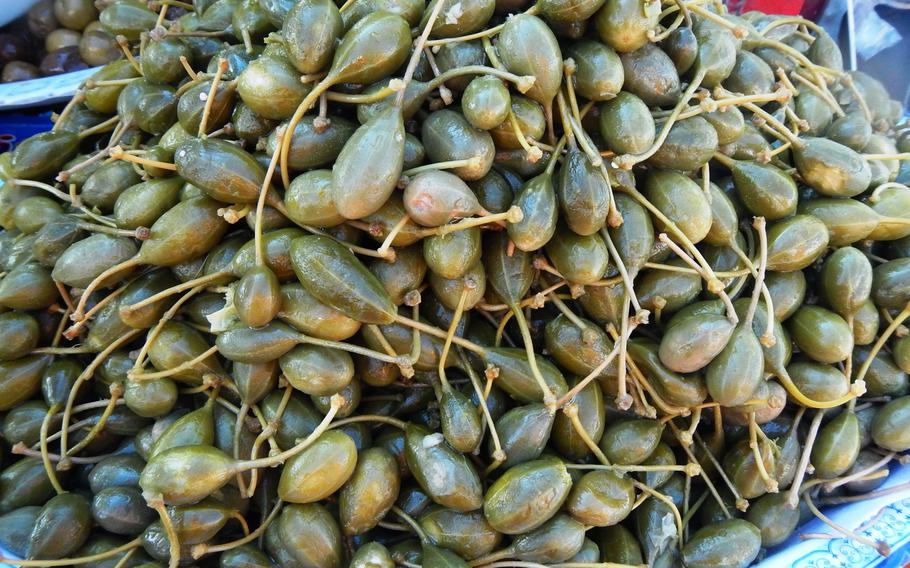 Caperberries are oblong, semi-green fruits, about the size of a grape. Caperberries are milder than caper buds and can be eaten raw and by themselves, or used in many dishes. (Sandra Jontz/Stars and Stripes) 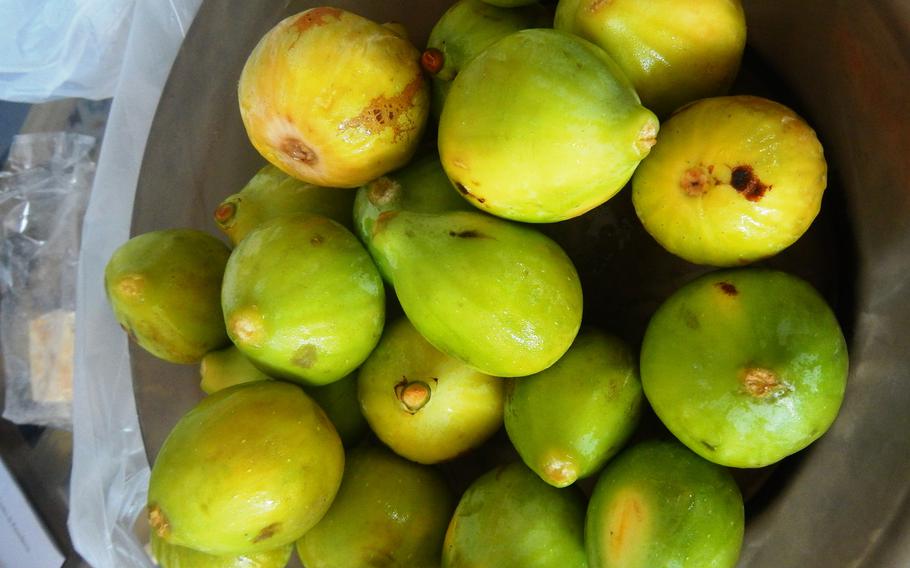 Figs are among the deliciously sweet fruits that grow easily in the fertile slopes, terraced lava soil and backing heat of the southern Italian island of Pantelleria. The island's dishes are influenced by both Italy and Tunisia, and couscous is a popular dish among the Pantescan people. (Sandra Jontz/Stars and Stripes) 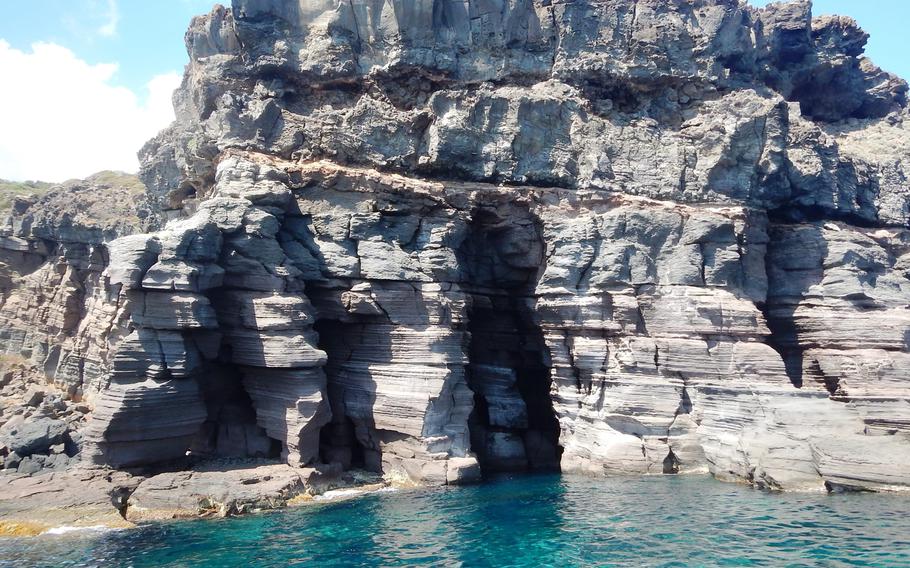 The wild, windswept volcanic island of Pantelleria, Italy, — known as the Black Pearl of the Mediterranean — marries beach and mountain vacations like few other places can, with its hot springs of thermal waters on the Big Mountain and unspoiled crystal-blue-green sea waters that beckon sailors and sun worshippers.

It’s beautiful and savage, and attracts travelers looking to relax and unwind from the hustle and bustle of life.

It’s the island on which Ulysses spent seven years loving the nymph Calypso — or so legend has it.

And I doubt you can get a bad meal here.

Surprisingly, Pantelleria is not a fisherman’s island. It’s a hunter’s island, with rabbit as the staple meat. But over the past decade or so, the “Panteschi,” as island residents are called, have embraced seafood and all the joys that hail from the ocean, and fish-based meals grace a growing number of restaurant menus.

The island is famous for its capers, which once grew wild but now are cultivated and make up a leading part of the island’s agriculture and its dishes. It’s the key ingredient in the pesto, and the celebrated Pantescan caper sauce drizzled over spaghetti or noodles.

Other primary ingredients in Pantescan cooking are almonds, tomatoes and olive oil. And wine. For drinking.

While the island is geographically closer to Tunisia than to Italy, much of its cuisine is Italian-influenced — it is an Italian island, after all. So wine is key. Be sure to sample the crisp, white wine made of the indigenous Zibibbo grape, and the sweet dessert wine “passito” (pronounced pah-see-toe), chilled of course, and produced from sun-dried Zibibbo grapes.

One such spot is the Lake of Venus, situated in the crater of an extinct volcano. The lake attracts

tourists and locals because of its black-green mud, which they use to smear all over their bodies, which, once dried by the sun, leaves skin feeling baby soft to the touch. Granted, its sulfur smell is anything but pleasant, but the natural — and free — mud spa is touted as a therapeutic solution to pimples and rheumatism.

There are no sandy beaches on the island — which, by the way, has just one working stop light. Sunbathers cluster on craggy rocks and boulders looking for a smooth area to lay out a towel or thin mattress.

Boat excursions that circumnavigate the island are a popular way to take in the island’s varying rock formations — and frequent stops on the tour allow swimmers to jump in and swim in some truly pristine clear waters that envelop the beautiful, savage Black Pearl island in the Mediterranean.