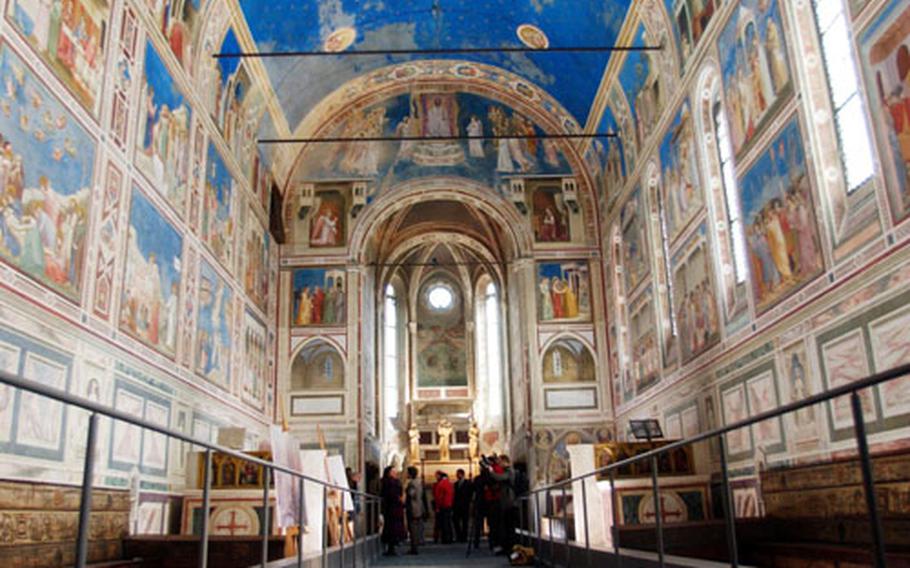 An inside view of the Giotto frescoes at the Scrovegni chapel, in Padua. (AP)

Before I went to Padua, Italy, I knew nothing about the Arena Chapel.

Not so my wife, an art-history major in college.

"We spent weeks studying Giotto&rsquo;s frescoes," she said, explaining her excitement over seeing the inside of this small building.

The paintings on the walls and ceiling of the 14th-century Italian chapel are considered among the art masterpieces of their time, noted for the detail and emotion in the characters depicting stories from the Bible and the life of Christ.

The works are cared for meticulously. Visitors must purchase timed tickets (reservations recommended), must sit in an air-conditioned room for 15 minutes to cool down and "stabilize the interior microclimate," and enter the chapel in groups of about 25 for only 15 minutes before being ushered out. Photos are not permitted.

But this does not mean there is no time to appreciate the frescoes. The museum includes an introductory film &mdash; headphones accommodate about a half-dozen languages &mdash; and an interactive computer program that allows those able to get control of the mouse the chance to see the chapel and its 53 individual panels. Computer sites describe life in medieval Padua, construction techniques of the time and the history of the chapel.

The chapel is also known as the Scrovegni Chapel after the person who had it built. It seems that Reginaldo Scrovegni was a moneylender who charged exorbitant interest rates and was not well-liked in Padua. After he died, his son, Enrico, took over the family business and was just slightly more popular.

He decided that in order to improve the family name &mdash; and his father&rsquo;s chance of a better afterlife &mdash; he would build a chapel near a palace he was renovating in a section of the town known as "the Arena," because it was the site of a Roman amphitheater. He arranged to have Giotto di Bondone, a Florentine painter who had already developed a reputation, paint the inside.

One of the museum&rsquo;s displays demonstrates how Giotto and his apprentices worked, starting with full-size drawings on the wall and then using paint mixed with patches of wet plaster to add color. The exhibit and explanation of how frescoes are done made it clear to me &mdash; or almost clear &mdash; exactly how frescoes were created.

By the time visitors finally get into the chapel, they should have a good idea of what they are going to see, including the sequence of the scenes and which ones they might wish to study the closest.

The chapel, which looks very plain from the outside, is not big &mdash; about 65 feet long and 25 feet wide. The panels tell the story of Joachim, father of the Virgin Mary, the life of Mary and the life of Christ. Smaller ones depict the seven vices and seven virtues, and there are larger ones at both ends of the chapel.

The largest fresco is of the Last Judgment. Among the characters depicted is Enrico Scrovegni, presenting a miniature of the chapel to the Virgin Mary.

If there is time between the multimedia display and your turn to enter the chapel, you can browse through the adjoining museum with its collections of archaeological finds and artwork, or walk around the cloisters. Neither is overly impressive. A better way to spend the time is to find a seat outside the chapel and watch people in the adjoining park enjoy the weather.

If you go ...Directions: We had a hard time finding the chapel in downtown Padua, because it is set back from the main street in a park amid several small, one-way streets.

Exit Autostrada 4 at Podova Ovest, take SP47 then SR47 south until it intersects Cavalcavia Chiesanouva and follow that into the city (it changes its name to Via Vicenza). At Piazza di Porta, take the second exit onto Corso Milano and follow it to Via del Risorgimento. Turn left and work your way to Largo Europa, an open square. The chapel is within walking distance, across from the post office. Limited metered street parking, a pay lot near Largo Europa and a parking garage are in the area.

Times: The chapel is open 9 a.m. to 7 p.m. daily throughout the year except for the following days, when it is closed: Jan. 1, May 1, Dec. 25-26. Visitors must pick up reserved tickets one hour before their assigned time.

Costs: Tickets cost 11 euros plus a 1-euro booking fee for adults. There are reduced rates for students 6-17, children under 5, military, humanitarian groups and groups of 10 or more. There is also a "double-turn" ticket that includes 40 minutes in the chapel for those going from 7 to 9:20 on certain evenings.

Information: The official Web site, www.cappelladegliscrovegni.it/eng/index_e.ht, includes directions on booking tickets online or by telephone. For excellent reproductions of the panels, see www.mystudios.com/gallery/giotto/04a.html.