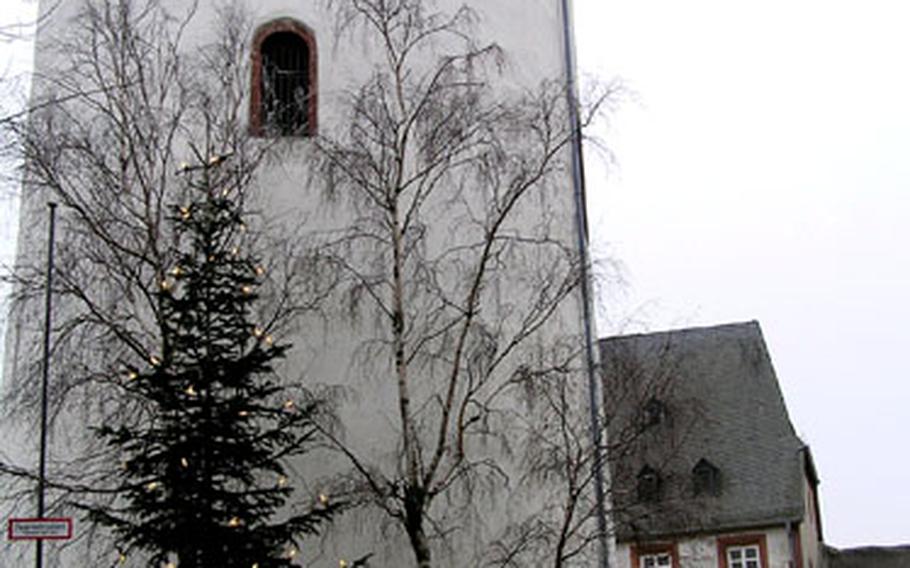 The white tower was the first structure built at the fortress at Otzberg. Visitors can climb a spiral staircase inside to get commanding views of the surrounding countryside. (Mecki Sheppen / S&S)

The white tower was the first structure built at the fortress at Otzberg. Visitors can climb a spiral staircase inside to get commanding views of the surrounding countryside. (Mecki Sheppen / S&S) 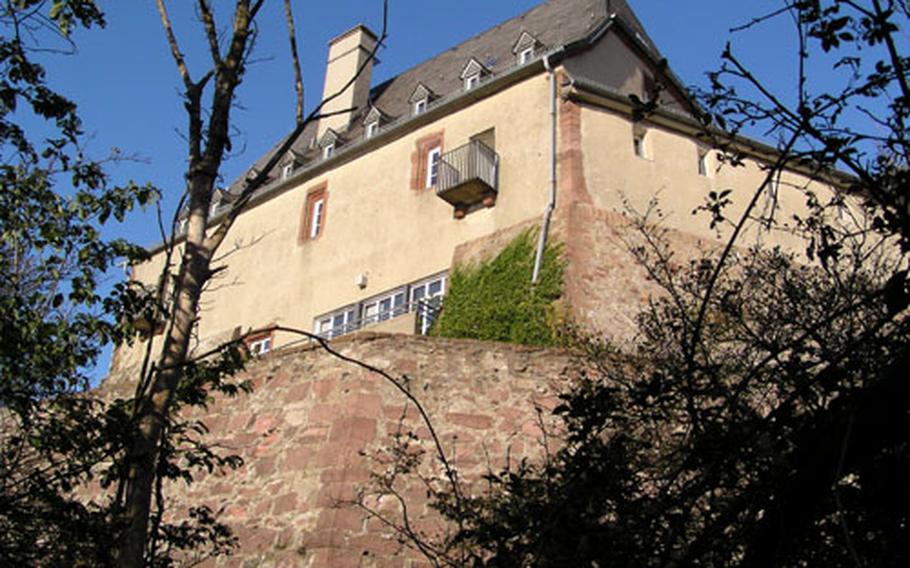 A view of the museum from the back shows part of the rise on which the fortress stood and the walls built around it to bolster its defense. (Mecki Sheppen / S&S) 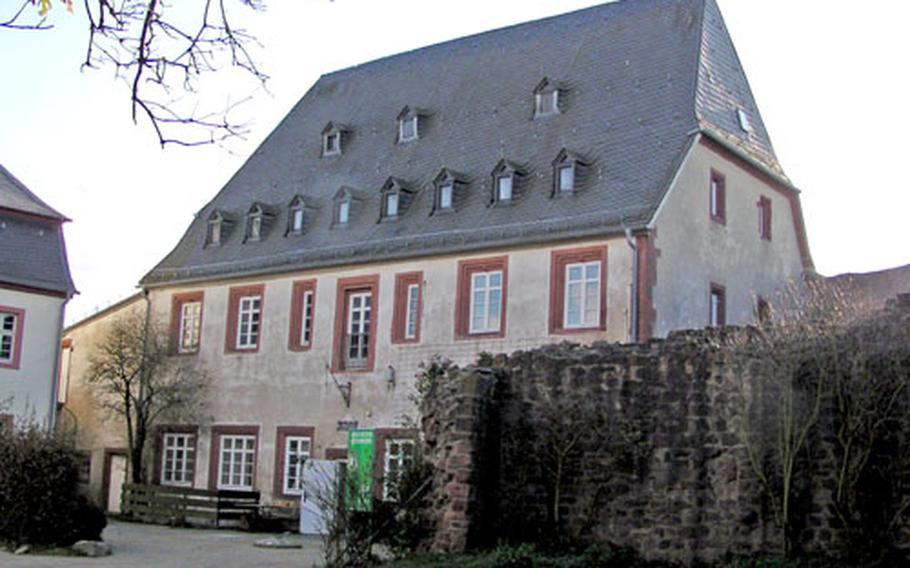 The Otzberg Museum occupies the former barracks for soldiers who were stationed at the fortress. (Mecki Sheppen / S&S) 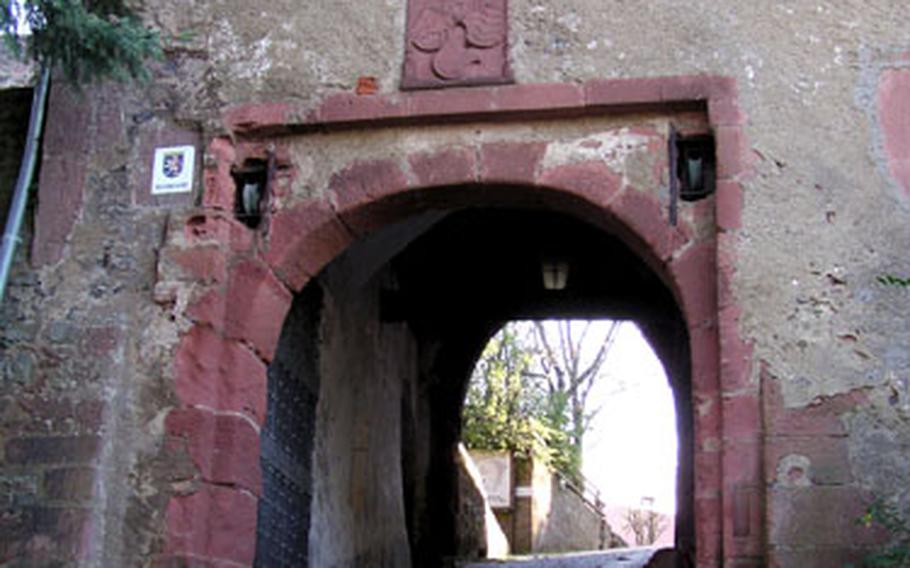 Above the front gate of the defensive wall are two wheels that held the ropes or chain that allowed the gate to be raised or lowered. (Mecki Sheppen / S&S) Part of a pottery exhibit at the Otzberg Museum. (Mecki Snippen / S&S)

The small fortress of Otzberg sits on a high point in Germany&rsquo;s Odenwald &mdash; as it has since the late 12th century.

Once a stronghold for knights, the clergy and the Bavarian army, it is now a museum complex packed with items from the region&rsquo;s past. It is also a focal point for small markets during Christmas, Easter and the spring that draw people from well outside the area.

The first parts of the fortress were most likely built in the 12th century by the abbott of Fulda, who received the land as a gift and had the 55-foot tower built to demonstrate his influence and power.

It was gradually expanded to include a defensive wall and rooms for knights and their men. During the next 300 years, the fortress changed hands several times, each time being reinforced and enlarged. In 1511, a gate house with a drawbridge, which remains today, were added and the settlement of Hering below it was surrounded by a wall.

In 1621, a Bavarian army of 2,000 men occupied the fortress and eventually subdued the locals. But they did not control the area long. A few years later, French forces conquered the fortress, and returned it to its owners under a 1648 peace treaty.

Otzberg then diminished in importance. In the 1700s, active-duty soldiers stationed there were replaced with disabled veterans whose duty was to guard prisoners kept inside the fortress. A few years later, most of the outbuildings were demolished by the government. All that was left was its tower, the commander&rsquo;s residence and office building along with small stables, a doctor&rsquo;s residence, the well house and the new kaserne, which housed troops.

In 1985, a museum was opened in the former kaserne. Later, the former command building became a restaurant.

From the tower &mdash; a spiral staircase leads to the top &mdash; there are commanding views of the surrounding woods and fields. On clear days, you can even see parts of Frankfurt.

Near the fortress entrance is a well that was dug in 1320 and is more than 150 feet deep. In 1788, with advanced technology, a winding wheel, which is still intact, was installed.

The Otzberg Museum has an extensive exhibit of furnishings, traditional clothing, pottery and religious items from the region that stretched from Darmstadt to Kassel. Of particular interest are the collections of pottery displayed by region of origin, and the examples of Sunday- best and wedding clothes.

The museum also has a small store, a shoemaker&rsquo;s workshop, a pharmacy and small &ldquo;Gasthaus&rdquo; from the past.

In addition, the museum, which is run by local people without government assistance, hosts temporary exhibits and craft classes, and is decorated with ever-changing seasonal artifacts.

During the next three weekends, the museum hosts a small Christmas market that features hand-made items and homemade food. A stop there is a visit into the region&rsquo;s past.

On the QTFrom the Darmstadt area, take B26 toward Babenhausen, then turn onto B45 toward H&ouml;chst and Michelstadt. After the town of Lengfeld, there will be brown signs with white writing for Veste Otzberg. In Hering, there are two designated parking areas.

COSTS: Entrance to the museum costs 2 euros. There is no charge to enter the rest of the fortress, including the tower.

FOOD: The Burgsch&auml;nke restaurant is usually open when the museum is. But if going with a group, it&rsquo;s best to make reservations by calling (0) 6162-72274.

INFORMATION: There is a list of events and more history on the area at www.otzberg.de, in German only.