Osteria da Afrro in Spilimbergo, Italy, has nothing to do with a hairstyle 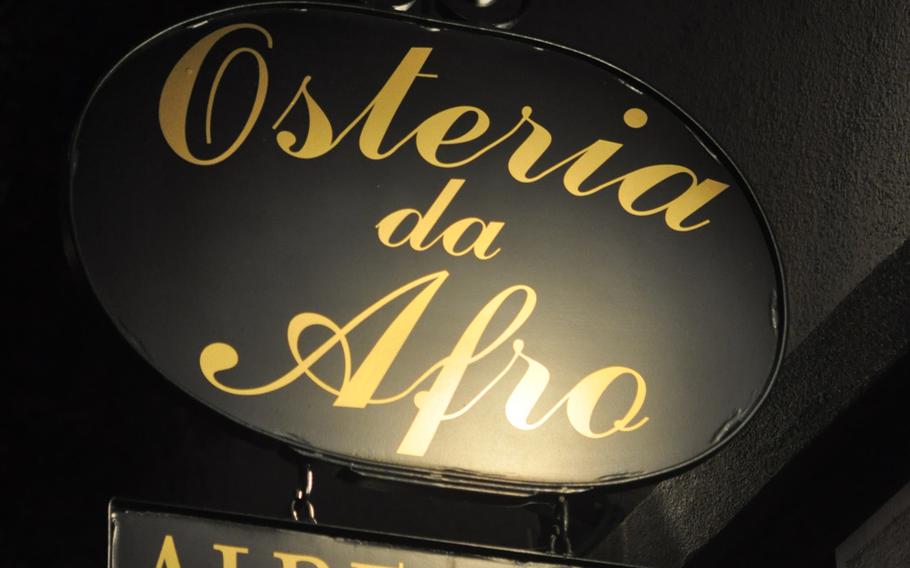 Osteria da Afro, located in the center of Spilimbergo, Italy, offers a variety of dishes from the Friuli-Venezia Giulia region and other parts of the country. (Kent Harris/Stars and Stripes)

Osteria da Afro, located in the center of Spilimbergo, Italy, offers a variety of dishes from the Friuli-Venezia Giulia region and other parts of the country. (Kent Harris/Stars and Stripes) 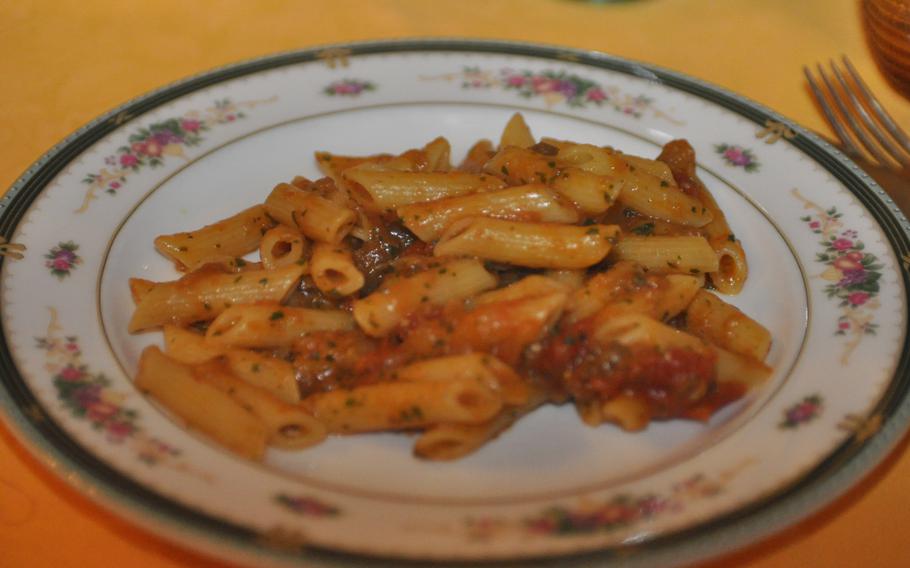 Penne with a sauce of tomatoes, eggplant and basil was a first-course offering during a recent visit to Osteria da Afro in Spilimbergo, Italy. (Kent Harris/Stars and Stripes) 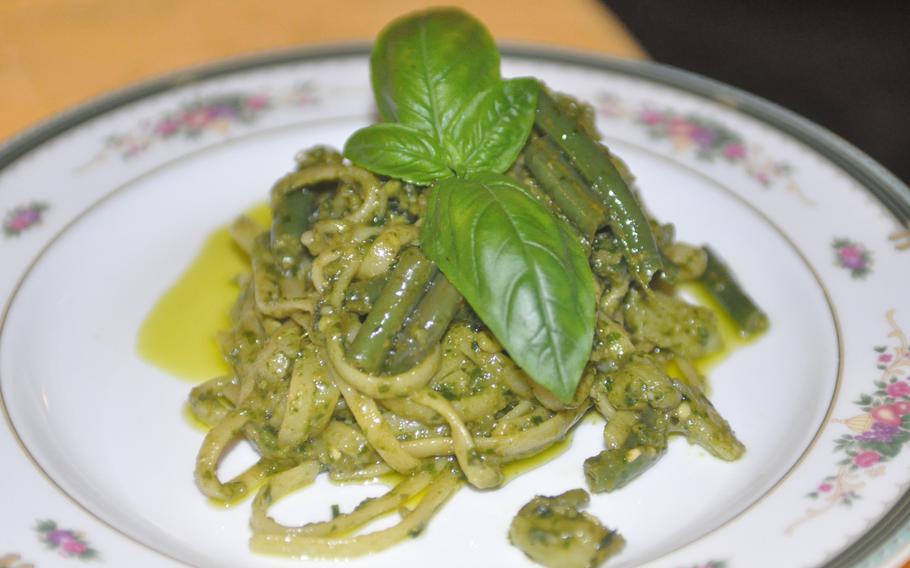 The food at Osteria da Afro, including this plate of linguine with a pesto sauce and green beans, doesn't disappoint. (Kent Harris/Stars and Stripes) 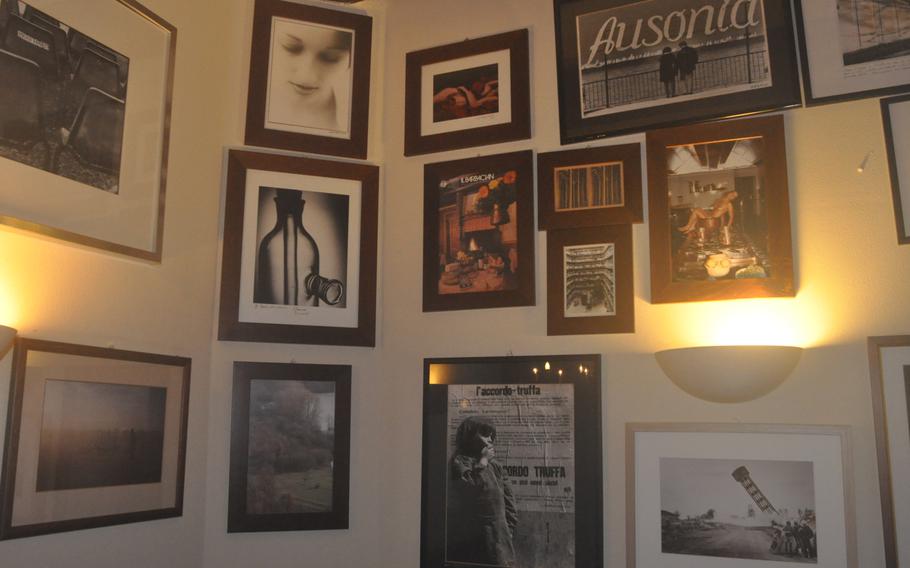 An eclectic collection of artwork decorates a corner of Osteria da Afro in Spilimbergo, Italy. The main dining area can hold about 30 people. (Kent Harris/Stars and Stripes)

The name might give many Americans a reason to take a second look. But Osteria da Afro, in Spilimbergo, Italy, doesn’t offer soul food. And it’s also got nothing to do with a hairstyle.

Dario Martina has been running the place for 27 years, and the first name of one of his early partners was Afro. But while the story behind the name might disappoint, the food won’t.

The menu, according to waiter Andrea Potente, has “a little bit of a lot of dishes.” It changes each day according to what produce and other food items are available. In fact, it sometimes changes during the day if a particular dish proves to be popular and the restaurant runs out. That’s because the restaurant uses only fresh ingredients available during a particular time of year, Potente said.

The menu recently featured fried zucchini blossoms with cheese and anchovies, fussillini with shrimp and tomatoes, veal with tuna sauce, stuffed peppers and stewed rabbit with mushrooms. Bolata — fried balls of polenta with mushrooms and a zesty cheese sauce — is one of the house specialties. Potente said the osteria is the only one in the area that makes the unusual dish in this way. The owner of another restaurant in a nearby town came up with the dish then passed it along to his friend, Martina, when his business closed.

The osteria has several other specialties, depending on the season. Most have origins from Spilimbergo or nearby towns in Friuli-Venezia Giulia.

The restaurant is part of the slow-food movement that started in Italy and France in response to the fast-food industry. Such restaurants generally rely on locally produced ingredients and serve meals designed to be eaten leisurely. Sometimes that means slower service as well, but it didn’t in this case.

The osteria opens at 7 p.m. for dinner, but diners who are there at that time might have the place to themselves. Locals don’t arrive until 8:30 or later at many non-touristy Italian restaurants and Osteria da Afro didn’t appear to be an exception. There’s room for about 30 in the dining room, so reservations would be a good idea on weekends for those who like eating as late as the Italians do.

Potente, a transplant from Venice, got busier as the night went on during a recent visit, as he was the only waiter. Martina joined in, stepping away from his adjacent bar that was much busier than the restaurant earlier in the evening. A variety of local wines were available for those dining in the restaurant.

There’s an eight-bed hotel upstairs for those coming farther away than Aviano or those interested in taking classes at the city’s famed mosaic school.

Directions: 14 Via Umberto I, Spilimbergo, Italy. It’s about a 40-minute drive from Aviano Air Base to Spilimbergo, depending on the route. The SR 251 passes closest to the base, turning into the SR 464 around Maniago. The quickest route, though, is probably the SR 177, which connects to the A28 autostrada at Cimpello and the SS 13 at the large traffic circle near the Emisfero mall. The SR 177 ends at the SR 464 a bit west of the city. The osteria is in the center of town. Via Camillo Benso Conte di Cavour connects Via Umberto with SR 464. There’s a free parking lot on the other side of the railroad tracks a few blocks from the restaurant.

Hours: Open for lunch and dinner six days a week and lunch only on Sundays.

Menu: In Italian only. English spoken.

Clientele: Italians and the occasional tourist.