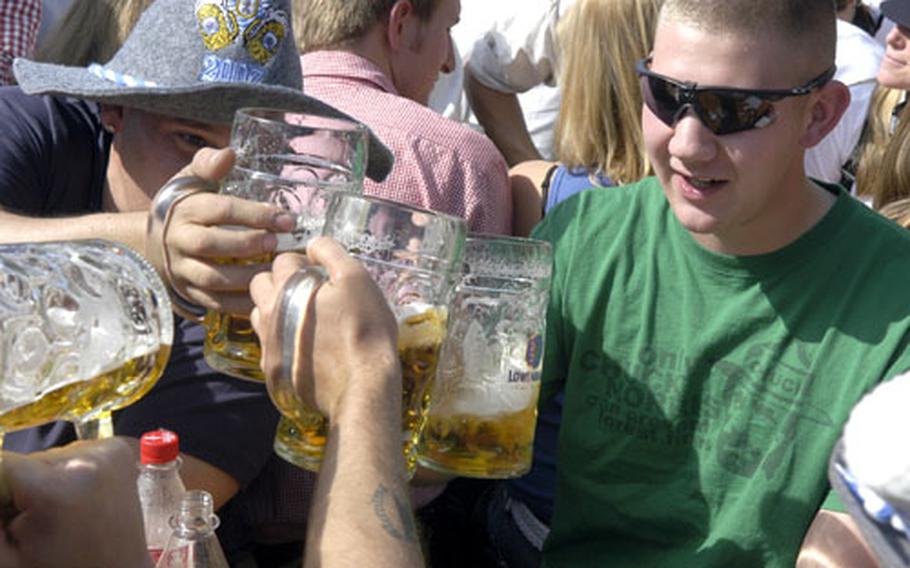 Sgt. John Mital and fellow soldiers from Illesheim, Germany, celebrate during their first round of beers at Oktoberfest. The group left early by bus and arrived in Munich in time to capture a table outside one of the beer tents. (John Vandiver / S&S)

Sgt. John Mital and fellow soldiers from Illesheim, Germany, celebrate during their first round of beers at Oktoberfest. The group left early by bus and arrived in Munich in time to capture a table outside one of the beer tents. (John Vandiver / S&S) 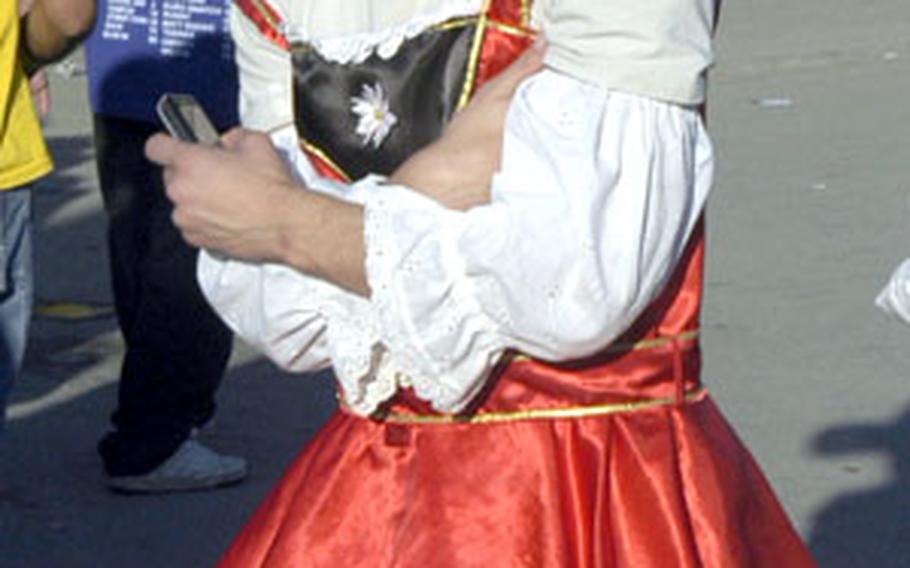 A young man dressed in a dirndl stumbles around the festival grounds. While thousands of women don the traditional German dress for Oktoberfest, most men wear lederhosen. (John Vandiver / S&S) 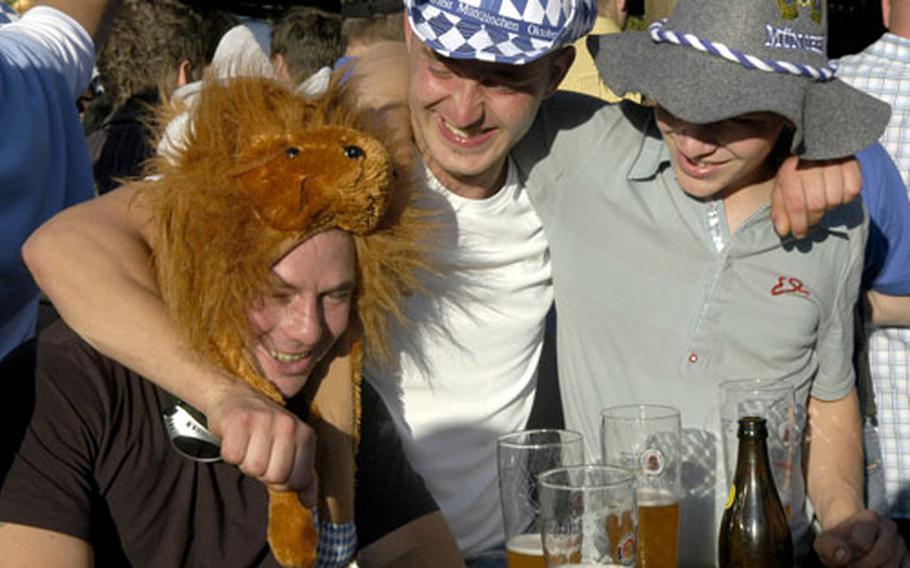 A group of Italian revelers celebrate at a small beer garten on the festival grounds. Oktoberfest attracts some 6 million visitors each year, pulling in tourists from around the world. (John Vandiver / S&S) 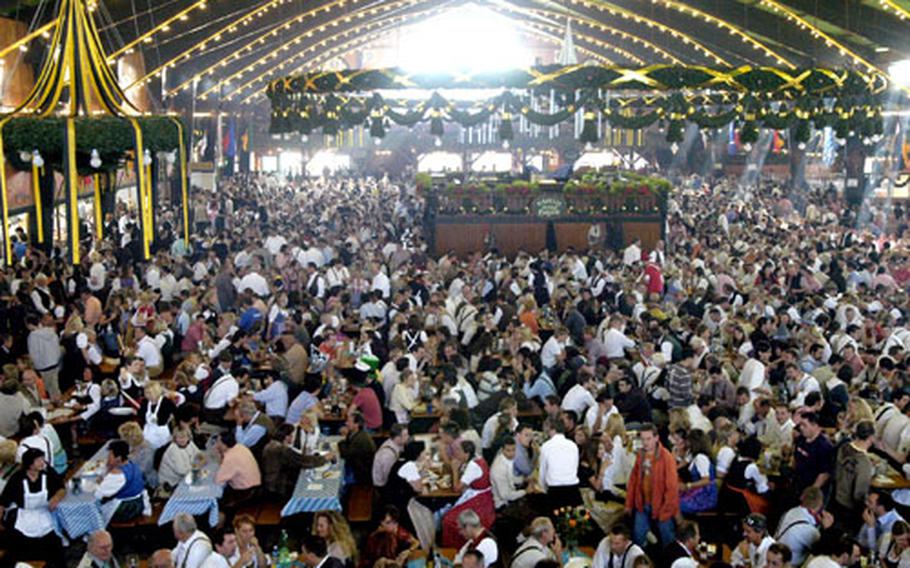 Visitors arrive hours early to get a seat inside one of the halls. At Augustinerbräu hall, the crowd ate breakfast wurst while holding down their seats on opening day of the festival. (John Vandiver / S&S)

Oktoberfest ends Sunday, but there&#8217;s still time to make a beeline to Bavaria and the liter-sized mugs of brew being served for hordes of revelers from around the world.

For those going, here is a little advice picked up during the opening weekend.

The beer tentsIf your aim is to land a seat at one of the famed beer tents for a marathon session of sausage and suds, be early. Drinking hours on the weekend are from 9 a.m. to 10:30 p.m., but the seats fill well before the first beer is poured. Entrance to the tents is free, but a seat must be secured to be served.

Neko, who did not want to give his last name, recommends arriving at a tent by 8 a.m. to ensure getting an inside seat.

If you fail to get in, try one of the outdoor seating areas where it&#8217;s easier to find a table. However, these also fill fast, particularly on weekends.

In all, there are 14 big tents on the 103-acre festival grounds. Together, the tents have a capacity of about 100,000 people. But there are many more people than seats. That&#8217;s why it&#8217;s best to arrive a day before to scout your location and get an early start the next morning.

The fairOktoberfest, which attracts 6 million visitors annually, offers more than beer. The atmosphere is like a juiced-up state fair. On the sprawling fest grounds there&#8217;s an endless stream of food vendors, serving fare such as rotisserie chickens, pretzels, wursts and sweets. There are countless amusements, including a Ferris wheel, merry-go-rounds, roller coasters and rides for children. But ultimately, the beer is the main draw.

Where to stayThe Munich Tourism Office is your one-stop shop for booking a room. The English-speaking phone operators will guide you through the options and help find the best deal.

Last week, the tourism office said there were still rooms available in and around Munich for the closing weekend of Oktoberfest. Double rooms, just outside the city limits, started at 140 euros (about $199) per night, including breakfast. Rooms inside the city will cost more, though some were still available last week for as low as 150 euros.

And you might be able to find a bargain. The tourism office suggests calling for a last-minute reservation and seeing if you can get a room left open by a late cancellation. You could get lucky &#8212; and a discount.

Getting there and getting aroundRegardless of where you are stationed, a bit of traveling is required to get to Munich.

There are multiple options, including Deutsche Bahn &#8212; the German rail line. Outdoor recreation offices at various installations and the USO offer round- trip express bus trips &#8212; some for the day, some with an overnight stay. Prices vary between locations. From Kaiserslautern, the trip costs $55. Check the Tours & Outdoors listings for a sampling of options.

If you decide to drive, leave your car at the hotel since it will be impossible to locate parking near the fest. Otherwise, look for parking near a subway station and take the train the rest of the way.

Look for the U4 or U5 subway lines and get off at Theresienwiese, the site for Oktoberfest. Single-trip tickets are 2.20 euros. If you&#8217;re traveling with as many as four others, a three-day partner ticket can be purchased for 21 euros. Look for the 3-tage partner-karte innenraum on the ticket machines. If your group is only in town for the day, purchase the partner-tageskarte innenraum for 9 euros.

What to expectWhen you hit the fest grounds, you will be welcomed by a wall of sound and smells. The crowd is thick, and by early afternoon there are already people staggering around drunk. So bring your sense of humor and be prepared to get bumped. Just roll with the punches and leave those beer muscles at home.

And fellas, keep an eye out for all those dirndls.