An ivory owl in a store in Michelstadt. Once this area was the center for ivory carving in Germany. (Michael Abrams / S&S)

An ivory owl in a store in Michelstadt. Once this area was the center for ivory carving in Germany. (Michael Abrams / S&S) The sign of the Zum Hirsch restaurant in Erbach, which serves local specialties. (Michael Abrams / S&S) 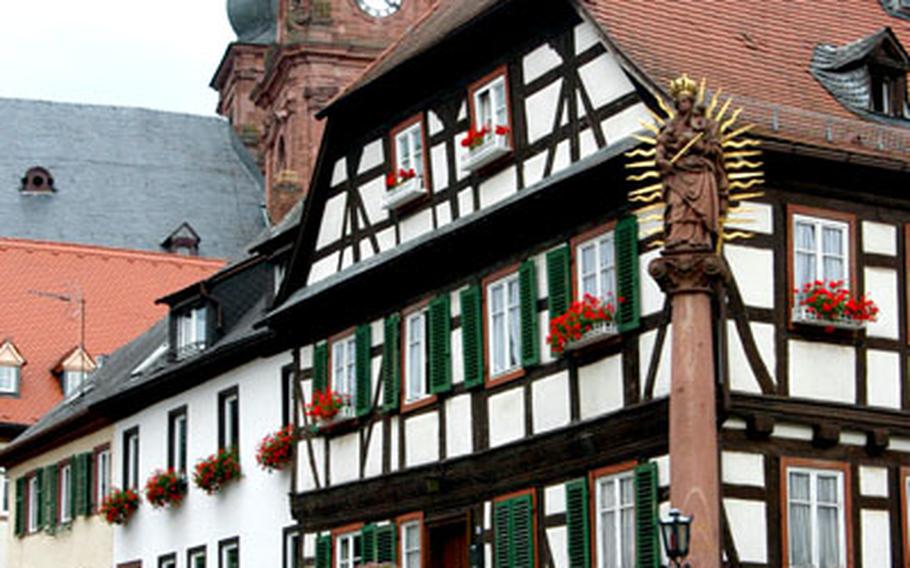 In a scene from “das Nibelungenlied,” Hagen kills Siegfried as the latter sips water from a spring in this modern sculpture at the Siegfriedbrunnen (spring), near Hüttenthal. (Michael Abrams / S&S) 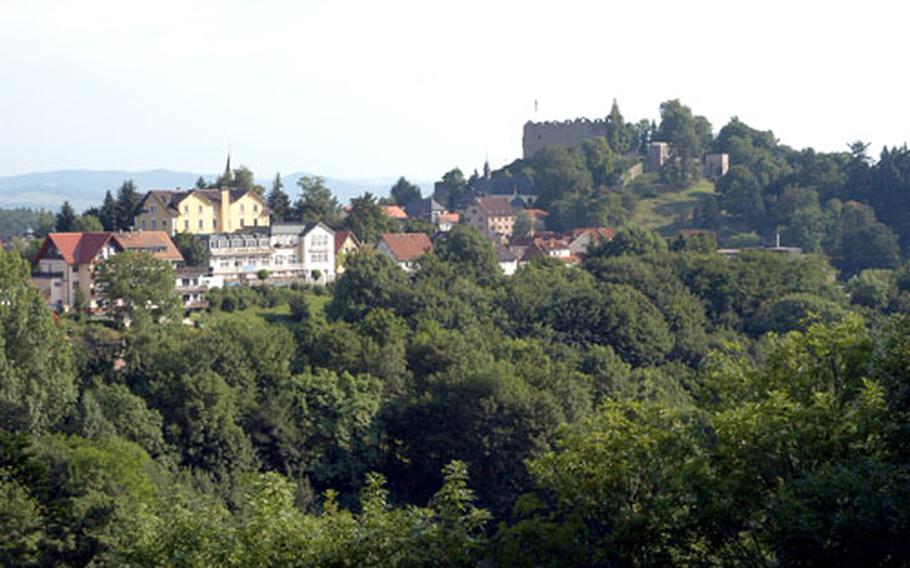 Lindenfels, with its castle, is a popular destination for day trips in the Odenwald. Visit the castle, walk through the old town and enjoy an afternoon coffee and cake like the locals do. (Michael Abrams / S&S)

Its name invokes a time long past. Odenwald: Woden&rsquo;s forest, named after the chief deity of the Germanic tribes. Odin, as the Norse called him, was the god of art, war, culture and the dead.

It is here that Siegfried, the hero of the epic German poem &ldquo;Das Nibelungenlied,&rdquo; was supposedly murdered by Hagen &mdash; stabbed in the back as he drank at a spring. Two Odenwald towns still argue over whose spring it was where the evil deed took place.

The roads leading through the Odenwald even have legendary names: Nibelungenstrasse and Siegfriedstrasse. The former leads past a sea of stones, the Felsenmeer, where legend has it that two giants stood on opposite hills throwing boulders at each other until one was buried beneath the rocks.

Romans quarried the stones of the Felsenmeer, and part of the northeastern border of their empire, the Limes, also cuts through the Odenwald.

It is an area of dark forests and rolling hills, castles, churches in medieval towns and fish-filled streams.

Tucked between the rivers Main to the east, the Neckar to the south, the Bergstrasse (mountain road) to the west and Highway 26 to the north, the Odenwald today is a popular tourist area in central Germany.

The roads here are favorites with bikers, be they motor- or pedal-powered. Hiking trails crisscross the hills and fields. If you see a blue parking sign with a pair of hikers pictured on it, you can be pretty sure there will be a map with hiking trails there.

The Odenwald is a great place for a day trip, but with plenty of hotels, guest houses and hostels at your disposal, you can surely stay longer. Many farmers offer vacations on the farm, where you can relax or &mdash; especially the kids &mdash; help out with daily chores.

The Odenwald has its culinary specialties, but some are an acquired taste. Best known is Handk&auml;se mit Musik, a pungent cheese topped with oil, vinegar and onions &mdash; the &ldquo;music.&rdquo; Kochk&auml;se, also served mit musik, is similar, except the cheese is runny. Hinkel in Ebbelwoi is the Odenwald version of coq au vin, chicken cooked in another Odenwald specialty, apple wine.

Made from apples grown in the numerous orchards here, apple wines, along with beer, are the main thirst quenchers in the Odenwald. Wine is popular on the western edge along the Bergstrasse and in the east along the Main. The trout, fresh from the streams, is also a delight, as are the varieties of local sausages.

Because there are many different ways to enter the Odenwald, we won&rsquo;t suggest a step-by-step tour, but rather some sights to see.

The heart of the Odenwald, and perhaps its most popular town, is Michelstadt. On the outside rather ugly and full of traffic, it is the town&rsquo;s center that spews old-world charm.

The old town hall on market square, dating to 1484, is probably the most photographed building in the Odenwald. In summer it is surrounded by outdoor cafes, in the winter by the town&rsquo;s famous Christmas market.

On one of the cobblestone pedestrian lanes that branch off the square is the Rathausbr&auml;u microbrewery. It&rsquo;s good for lunch or dinner, and always for a beer.

Here, but also in nearby Erbach, are shops selling jewelry and knickknacks made of ivory. Once this area was the center for ivory carving in Germany. When the hunting of elephants and the sale of their tusks were prohibited, most of the carving shops closed. A huge find of mammoth tusks led to a resurgence of the ivory carving craft, and most new items for sale today are from the extinct animal.

The German Ivory Museum, in Erbach, presents carving demonstrations daily. The town also has a palace with an interesting collection of arms and antlers.

The Templerhaus in Amorbach, built in 1291, is the oldest known half-timbered house in Germany still standing. Other sites worth seeing are the baroque St. Gangolf church and the F&uuml;rstliche church. The market square with the old town hall is quite beautiful, but the homemade Italian ice cream at Eiscaf&eacute; Dolomiti is just as good a reason to visit the square.

The &ldquo;mutter museum&rdquo; in Amorbach is an eclectic collection of art, teapots, curiosities and things having to do with Pepsi-Cola.

Walld&uuml;rn is a place of pilgrimage. In a silver reliquary on the altar of the Walld&uuml;rn basilica is a corporal, a holy cloth. When a priest knocked over a consecrated chalice in 1330, the wine that spilled out formed a blood-red figure of a crucified Christ on the cloth. For more than 550 years, believers have been making the pilgrimage to the holy blood at Walld&uuml;rn. More than 100,000 go there annually.

Burg Breuberg towers over the surrounding countryside. The oldest part of the castle dates to the middle of the 12th century. The hike up to the castle is popular, and when you get to the top there is a nice tavern (closed Tuesdays) to quench your thirst. The castle has a small museum and a youth hostel, and you can climb the castle keep for 50 euro cents.

The M&uuml;mling, an Odenwald stream, springs to life in the center of Beerfelden in an interesting fountain made of 12 pipes, with the water pouring out of lions&rsquo; heads. On the outskirts of town, there still stands a 16th-century gallows, where criminals were brought after being convicted in court. The last execution was in 1804 when a gypsy woman was hanged for stealing a chicken and two loaves of bread for her sick child.

The Felsenmeer, where the giants dueled with stones, is between the towns of Staffel and Beedenkirchen. Here there is also a spring named after Siegfried. But don&rsquo;t confuse this one with one of the &ldquo;real&rdquo; Siegfried springs that the towns of H&uuml;ttenthal and Gras-Ellenbach are still arguing over.

Getting there: The Odenwald is in central Germany, and can be reached in an hour or less by car by most Americans stationed in Germany with the exception of those in Spangdahlem/Bitburg and southern and eastern Bavaria.

When to go: Visit any time of year, but the best time is from early spring to the end of October, and for the Christmas markets in December.

Take along: A good map. The red Allianz Rhein/Odenwald 1:100,000- centimeter map is a good choice. There are also good maps for bicycling and hiking in the Odenwald. Buy them at local bookstores.

Be sure to have a blue parking dial in your car, because it ensures that parking is free for at least a couple of hours in most towns.

Health tip: After walking in the forests and fields, be sure to check uncovered skin for ticks.

Information: Check out our stories on the Felsenmeer and the Bergstrasse. For information on the Odenwald, the very thorough but German-only Web site is www.odenwald.de.