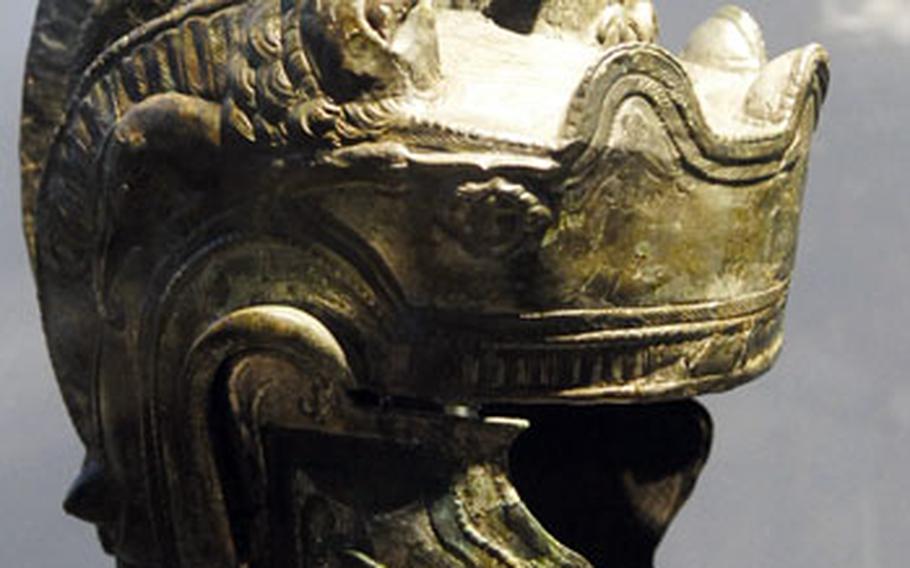 This Roman parade helmet from the second century is the only reconstructed example of its type in existence. (Photos by Michael Abrams/S&S)

This Roman parade helmet from the second century is the only reconstructed example of its type in existence. (Photos by Michael Abrams/S&S) 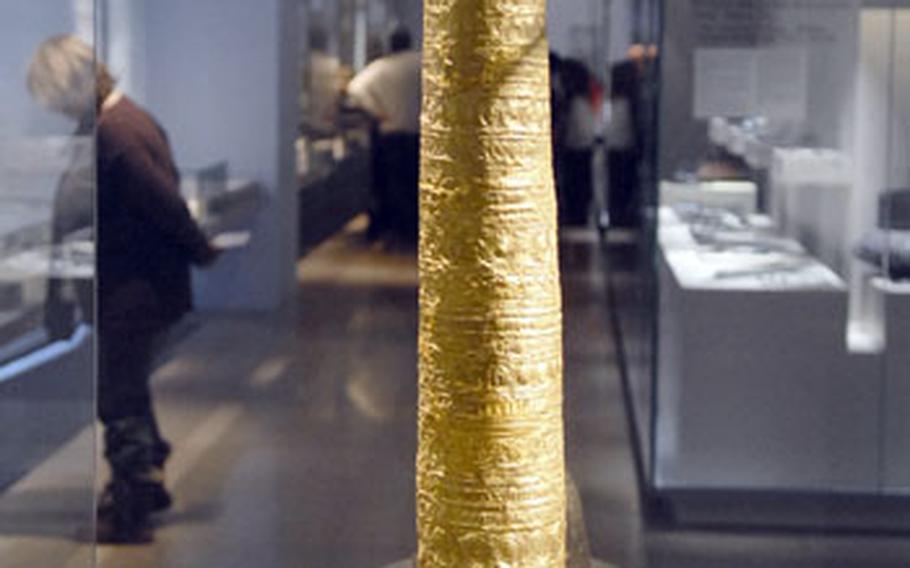 The golden headdress of a Bronze Age sun priest was found near Nuremberg by a worker clearing tree stumps in 1953. () 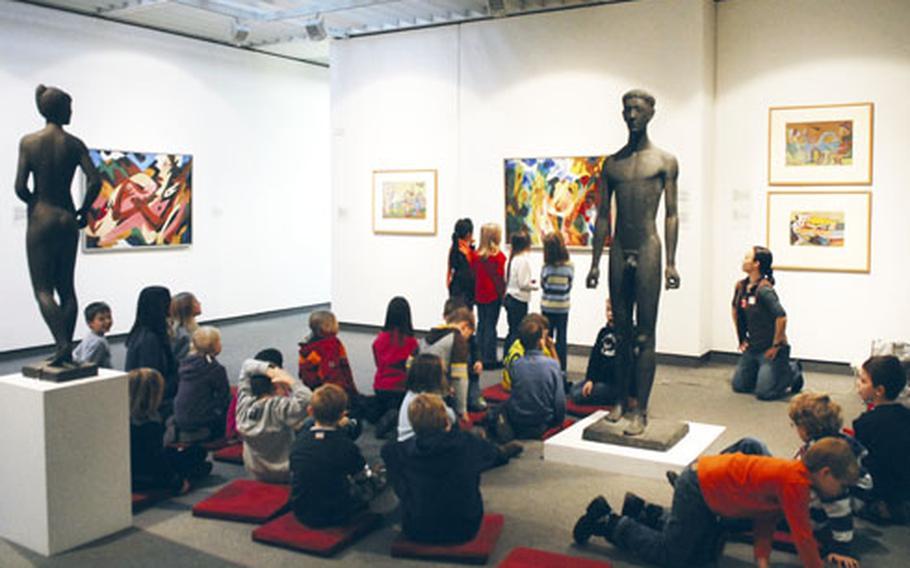 Schoolchildren learn about 20th-century art at the Germanisches National Museum in Nuremberg, Germany. () 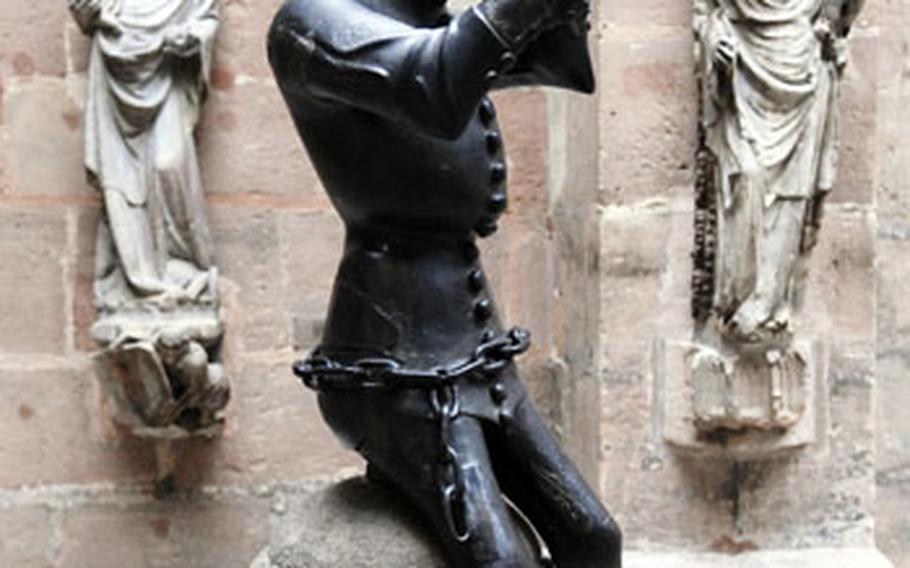 This 14th-century “Hansel” was once part of a fountain in the courtyard of a Nuremberg hospital. ()

In the old imperial city of Nuremberg, there is a big, sprawling museum dedicated to all things German.

With a collection that reaches from Stone Age tools to 20th-century art and design, the Germanisches Nationalmuseum gives the visitor insight into the cultural history of the German-speaking regions of central Europe.

Housed in a variety of connected buildings that date from the 14th century to the present, the GNM, as it is known for short, has exhibits devoted to painting, sculpture, religion, applied arts, musical instruments, weapons, armor, clothing, farmhouse interiors and household furnishings. And if that weren&rsquo;t enough, a couple of doors down in a separate building is the museum&rsquo;s toy and doll house collection.

While the exhibits follow a prehistory-to-modern-times chronology, the way they are presented do not, sometimes leaving visitors confused in the maze of buildings. Luckily, directions are posted throughout the museum to guide them through.

One of the most fabulous items on display is also one of its oldest: the 3,000-year-old golden headdress of a Bronze Age sun priest. A worker clearing tree stumps found the tall, conical headdress near Nuremberg in 1953.

Another ancient item worth checking out is a bronze, second-century Roman parade helmet.

The art through the ages on display here is from such notable Germans as Albrecht D&uuml;rer, Tilman Riemenschneider, Carl Spitzweg, Ernst Ludwig Kirchner, Egon Schiele and Joseph Beuys.

Nuremberg was also a major music instrument-manufacturing city, and the museum&rsquo;s collection is extensive. Included are the earliest-known trombone and many forerunners of today&rsquo;s guitar.

One room in the museum features the history of clothing from the 18th to the 20th century. Not only can you see how dress clothes have changed over the years, but also the evolution of underwear and swimwear.

Another room is dedicated to bourgeois art and culture in 19th-century Germany. Besides sculpture and paintings &mdash; check out Anselm Feuerbach&rsquo;s "Battle of the Amazons" &mdash; there is also an early bicycle and a guillotine on display. A French tribunal in the German town of Dillenburg used the latter until 1813.

The museum&rsquo;s collection of armor and weapons is perhaps not as extensive as one would expect from a country filled with castles &mdash; although one piece, a knight in shining armor atop his steed, is pretty impressive.

However, the GNM&rsquo;s collection of medieval religious sculptures is outstanding. Check out the 13th-century John the Baptist or the 14th-century Madonna shrine.

Another example of fine medieval art is the "Spieleteppich," a tapestry from about 1400 depicting the Minnespiel, the courtly game of love. After a major restoration, it was recently unveiled for the first time in 30 years, and is the centerpiece of an exhibition that lasts until April 13, 2009.

The Germanisches National Museum is in downtown Nuremberg at Kart&auml;usergasse 1. By foot, it is about 10 minutes from the main train station. The nearest public parking are the Opernhaus, Sterntor and City-Point garages.

The cafe in the museum&rsquo;s basement offers a lunch menu that changes daily as well as cake and coffee specialties at decent prices. There are also plenty of restaurants in the neighborhood.