Nuremberg: Comforts for creatures at Tiergarten 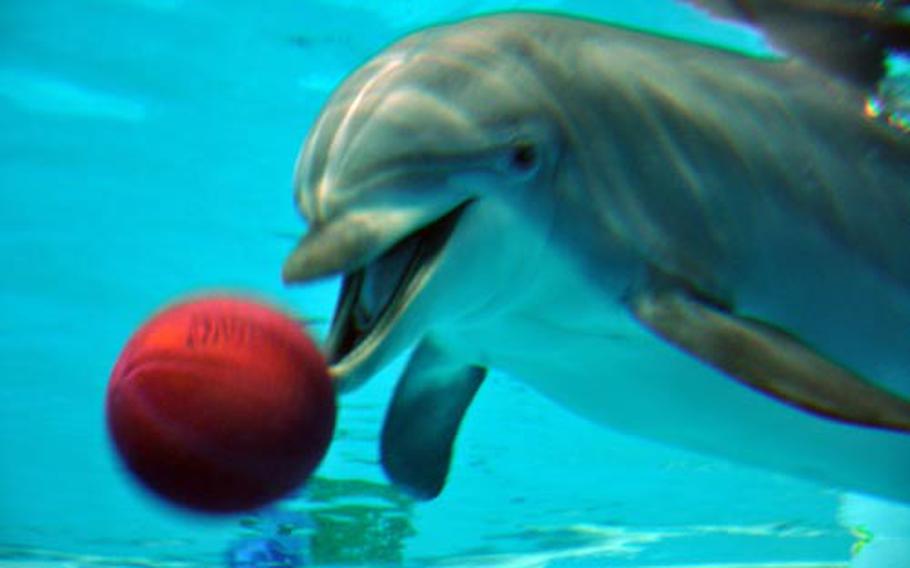 A dolphins playing basketball is seen at the Delphinarium. (Dan Blottenberger / S&S)

A dolphins playing basketball is seen at the Delphinarium. (Dan Blottenberger / S&S) 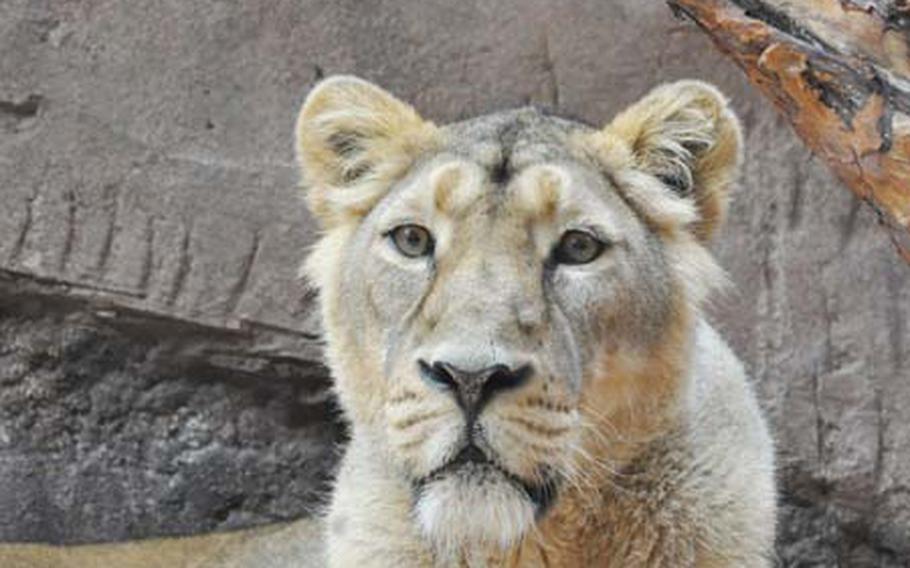 The zoo’s lions and tigers are moved inside during the winter months. (Dan Blottenberger / S&S) 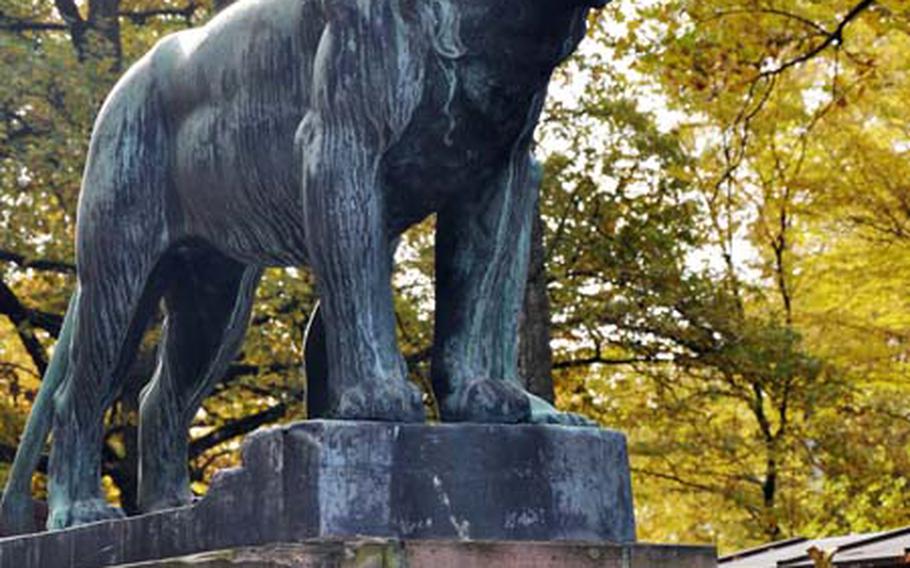 A statue of a man and a lion stands at the entrance to the zoo, founded in 1912. (Dan Blottenberger / S&S) 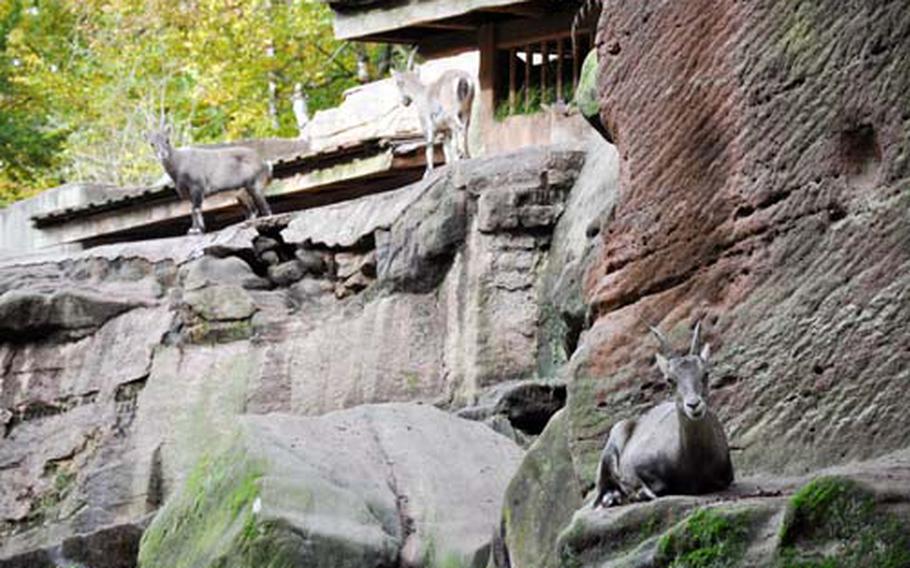 Mountain goats take a perch on the “cliffs” high above the grounds of the Nuremberg zoo. Many of the zoo’s 2,500 animals inhabit realistic-looking environments. (Dan Blottenberger / S&S)

"How did they get up there?" I watched, bewildered, as about a dozen mountain goats bounded around a cliff that went up at least 100 feet, bouncing acrobatically up and down ledges to get where they wanted to be in their home away from home.

The terrain at the Nuremberg zoo, or Tiergarten, is so realistic that at times I became nervous thinking that I might have accidentally walked into an animal&rsquo;s cage. That is one of the reasons the zoo attracts visitors from all over &mdash; although on this late-October day there wasn&rsquo;t much of a crowd to avoid.

The Tiergarten was founded in 1912 and features more than 2,500 inhabitants and 285 kinds of animals. The park covers 170 peaceful acres, and a visit there is like a walk through the woods with a few uphill climbs.

However, don&rsquo;t confuse this place with a petting zoo. It has lions and tigers and bears, and, "oh my," lots of other large beasts. And while those animals draw their crowds of viewers, so do the Guinea baboons and Barbary apes that are constantly on the move, playing, fighting or eating. Look for some of the smaller ones to be clenched to their mothers.

The park also has two young tiger cubs that are worth checking out, and there is a baby rhinoceros, which seems to never leave its mother&rsquo;s side. Get there soon before they grow up.

Two of the park&rsquo;s special features are an aquapark and a Tropenhaus, or tropic house.

The aquapark is home to black-footed penguins, sea lions and polar bears. You can see the animals underwater by walking through a glass-enclosed tunnel that gives a close-up look at the animals as they swim about or are fed. The tropic house holds such animals as manatees, Malayan tapirs and sloths. The zoo is currently building a new dolphin lagoon and manatee house.

The park is quite a maze, but there are signs &mdash; in German but including pictures of animals &mdash; at every turn directing you toward the creature of your choice. However, you might not always find all of them outdoors: The zoo is open yearround, but many of the animals are moved indoors or "hidden" during the fall and winter months.

If you get hungry, there is a concession stand with a gift shop at the entrance to the park. The food during the off-season was nothing to boast about &mdash; just your basic over-priced snack food and beverages &mdash; but during the spring and summer months, a park restaurant is also open.

There is another, larger, concession stand and small beer garden at the park&rsquo;s most attractive feature, the Delphinarium. Through small windows, you can observe several dolphins swimming in a pool, watching as they play or just stare back at you.

There is also a dolphin and seal show here several times throughout the day. Although the narration is in German, it is entertaining to watch the interaction between the trainers and dolphins, which understand through simple hand motions and a whistle what tasks they are to complete.

The Nuremberg zoo is about a one-hour drive from Bamberg. Take Autobahn 73 south until it intersects with A3 and head toward Munich, Nuremberg and Regensburg. Continue on A3 until you get to Exit 87, Nuremberg&ndash;Mogeldorf. Then follow signs to the Tiergarten; there is plenty of parking on four streets that converge at the park front gate.

CostsEntrance is 8.50 euros for an adult, 4.20 euros for ages 4 through 13; younger children are free. Tickets to see the dolphin and seal show are 4.50 euros for adults and 2 euros for children. Check the Web site for family packages and other discounts.

FoodBasic concession-stand food is available at two sites in the park. There is also a beer garden by the Delphinarium and a park restaurant called the Waldschanke that is only open during the spring and summer months.