Normandy: Where the sand once ran blood red Tourists visiting Omaha Beach in early morning when the tide is out can watch race horses train or wade in the surf. (Peter Jaeger / S&S)

Tourists visiting Omaha Beach in early morning when the tide is out can watch race horses train or wade in the surf. (Peter Jaeger / S&S) Visitors atop the Falaise d&#39; Aval rock formation on the Côte d Albâtre are barely visible as they walk to the end of the formation for a closer look at the rock needle Aiguille d’Étretat rising from the surf. (Peter Jaeger / S&S) 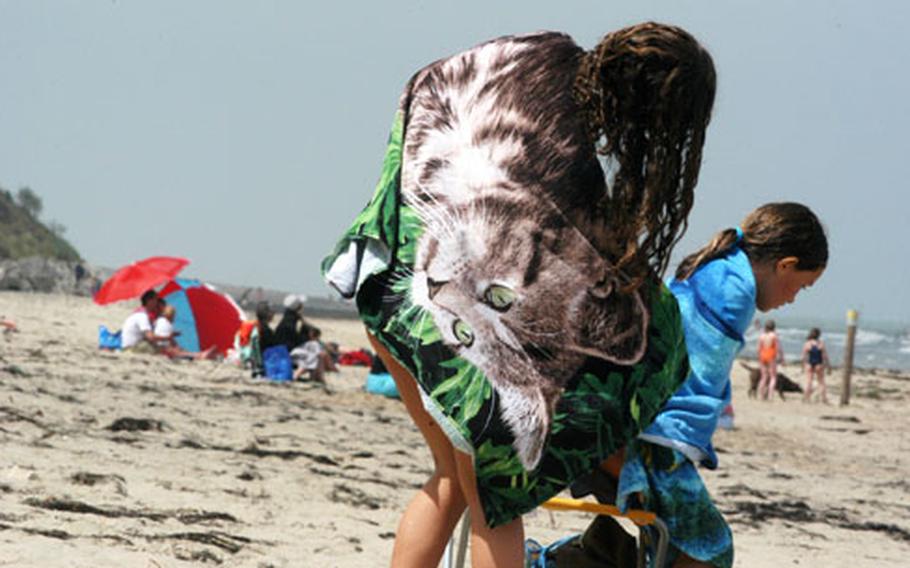 French families enjoy a Sunday afternoon at Utah Beach, one of the sites of the D-Day landings. The beach is on the Cotentin penninsula. (Peter Jaeger / S&S) 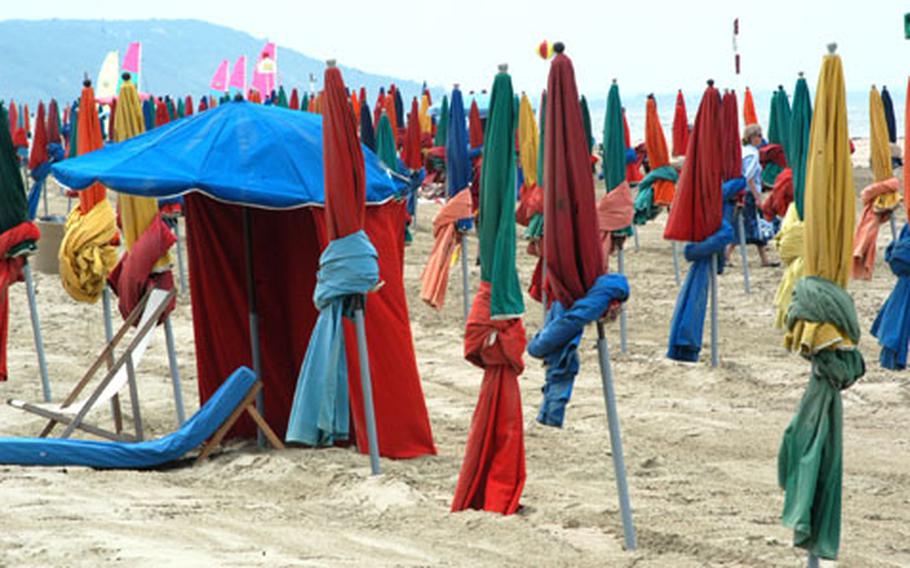 An early sunbather is hidden in a forest of colorful umbrellas gracing the main beach of Deauville, France. (Peter Jaeger / S&S) 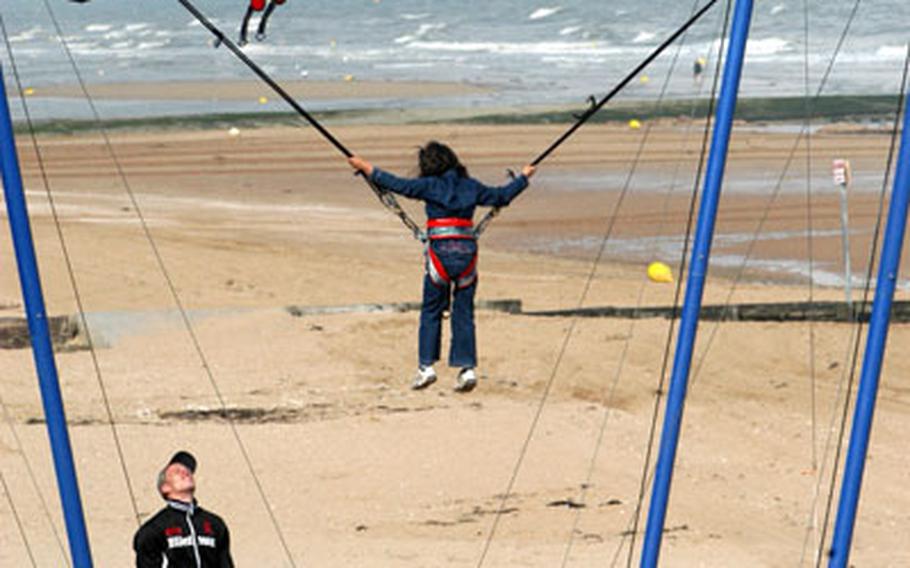 Low tide at the beach of Cabourg at the Côte Fleurie is a good time to play on an elaborate swing. (Peter Jaeger / S&S)

It&rsquo;s early morning on a beach in Normandy, France. The rain has stopped. Suddenly, the dark, towering clouds are ripped open by an intense sun, dramatically illuminating the steep white cliffs of Pointe du Hoc.

On the beach, the thundering surf rolls in and out in an endless succession of waves. Seagulls are thrown up from the depth by a brisk breeze, swirling like paper airplanes through the air. Far away, the deep horn of a trawler crossing the English channel echoes the surf.

Another glorious day is beginning.

A few miles away, east of the cape of Pointe du Hoc, a lone jogger moves along the surf. He has the white, endless beach to himself. Does he realize he is running in peace on one of the most famous beaches on the Norman coast? Sixty-three years ago this beach earned its grim name: Bloody Omaha. The longest day, the liberation of Normandy and the defeat of Nazi Germany had begun.

Here at Omaha Beach (a code name for this section of the landings) America and its allies paid a high price for victory. Thousands of soldiers died in the water and on the beach in heavy machine-gun fire. Literally, the beach ran red with blood.

Today, only the endless rows of white crosses at the American Cemetery in the dunes above the beach near Colleville-sur-Mer recall the dramatic times. The beach itself (which is now officially called Omaha Beach) looks like any of the many fine sandy stretches on France&rsquo;s northwest coast. Early in the morning, race horses from a nearby stud farm are trained on the smooth, flat surface. Runners practice. Later, French families arrive with their umbrellas and picnic baskets. Impromptu soccer is played and kites are flown. It&rsquo;s beach life French style, but similar to beaches worldwide.

While most Americans are mainly interested in Normandy for its role in D-Day &mdash; the museums and monuments, the bunkers and artillery emplacements of the Atlantic Wall &mdash; the region has a wide variety of beaches and more to offer. From the mouth of the Somme river in the east, to Mont-St-Michel in the west, 400 miles of beaches wait to be discovered.

C&ocirc;te d&rsquo;Alb&acirc;tre, the Alabaster Coast in the northeast of Normandy, has scenic cliffs with steep spires and dramatic arches. The French Impressionist painters discovered this landscape and the silvery changing light at the end of the 19th century, leaving their studios in Paris to work outside in all kinds of weather. F&eacute;camp and &Eacute;tretat, summer resorts with small beaches nestled in narrow valleys between the cliffs, are typical of the region.

Moving westward, one passes the metropolis of Le Havre, rebuilt after the war, and the Pont de Normandy, the gigantic bridge spanning the mouth of the Seine river.

The modern bridge leads almost directly into medieval Honfleur with its old harbor, one of the many highlights of the C&ocirc;te Fleurie, the famous Flower Coast of Normandy.

This section of the coast is the closest to Paris, and so popular with Parisians that it was nicknamed the 21th arrondissement of Paris. The beaches of the C&ocirc;te Fleurie between Honfleur and Cabourg are among the most beautiful in France. Their white sandy beaches are especially attractive for families with children because of their soft slope leading into the sea.

28 Small picturesque towns are mixed in with fashionable resorts like Deauville, famous for its casino, elegant shops and its American film festival. At its remarkable seaside, many of the changing rooms are named after American actors who attended the festival, such as Marlon Brando and Richard Widmark.

Farther west, the beaches of the C&ocirc;te de Nacre, the Mother- of-Pearl Coast, come next. Familiar names here are Juno, Gold and Sword. And Omaha. All were code names for the Allied landing sites in June 1944. Today a route marked with the symbol of a dove connects the sites with the many small vacation resorts, beaches and fishing villages.

This part of the coast, quieter and more relaxed than the C&ocirc;te Fleurie, is also known for its seafood &mdash; its fish, shrimp and the famous Norman oysters.

They make the perfect local meal, accompanied by cidre, a sparkling wine made from fresh apples, the Norman champagne.

Cap the experience off with another local jewel: dark, golden Calvados, a brandy distilled from the soul of cidre. The Normans drink it before, between and after the many courses of their famous hearty cuisine. Called trou normand, or the Norman hole, &ldquo;Calva&rdquo; is served between courses to make room for the next round.

Not a bad idea. A toast to another great reason to visit Normandy. A votre sant&eacute;.