Rows of beach umbrellas and chairs along the beach in Nice. (Scott Schonauer / S&S) 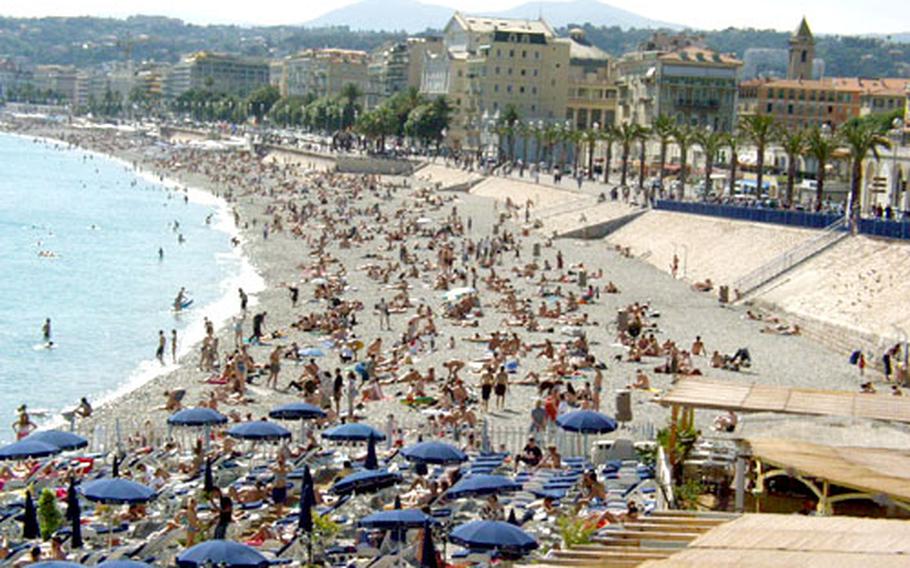 A view of the pebbled beach and the city of Nice. (Scott Schonauer / S&S) Ensign Mike Jarosz, who is stationed at Naval Station Rota, Spain, dives off a cliff and into the water in Nice, France, as an onlooker takes a photograph. Jarosz was a diver in college. (Scott Schonauer / S&S) 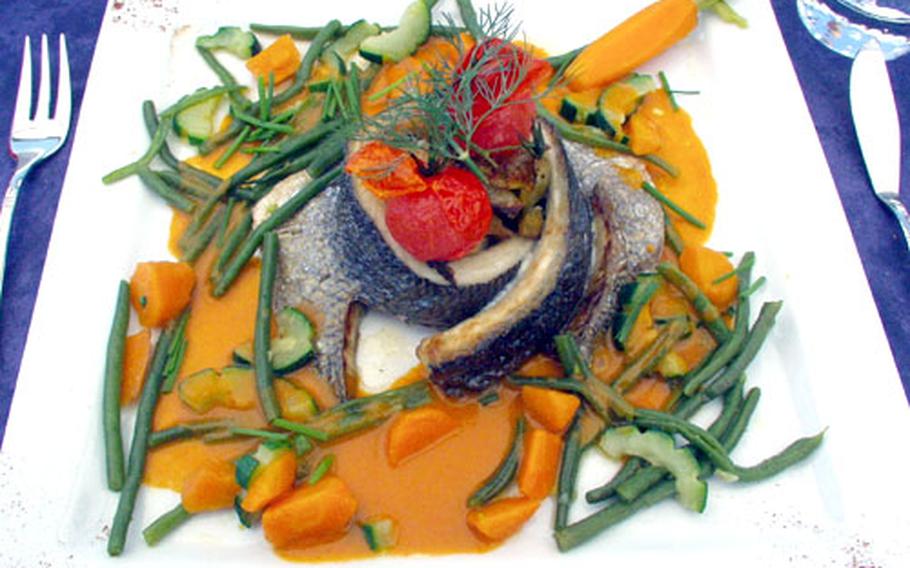 A typical meal of vegetables and codfish at a restaurant in Nice. (Scott Schonauer / S&S)

Some of France&rsquo;s finest art museums are in Nice. It is where music lovers can attend an opera or listen to jazz, where Roman ruins still stand and where shoppers could reach their credit limit buying only perfume.

That&rsquo;s what all the guidebooks promise. But you don&rsquo;t have to pack all of it into your schedule if you go there.

Visitors can miss the paintings, skip the dozens of monuments and churches and sidestep the pricey boutiques selling designer labels and still enjoy the capital of the French Riviera.

During Memorial Day weekend, our group from Naval Station Rota, Spain &mdash; in the area for a ceremony at a nearby American cemetery in Draguignan &mdash; spent most of a day relaxing on the pebbly beach, sipping white wine, checking out the au naturel sunbathers and strolling through the winding streets of the Old Town.

In some respects, we didn&rsquo;t miss a thing. We may have seen very little on the tourist map, but we could not have cared less as we drank our second bottle of wine and took in the scenery that inspired some of history&rsquo;s greatest painters and writers.

A short itinerary is not always a bad itinerary. And we soon discovered that there is no reason to hurry while visiting the Cote d&rsquo;Azur, the French name for the Riviera.

Nice is a modern tourist destination along the Mediterranean coast. British and Russian aristocrats have been vacationing here for years.

While it may lack the glamour of nearby Cannes and its famous film festival, Nice is bigger and makes up for the glitz in character, ambience and variety.

It is one of France&rsquo;s biggest tourist destinations. Each year, more than 3 million people visit the city, according to the Nice Convention and Visitors Bureau.

The international airport &mdash; the second largest in France &mdash; brings tourists in droves by offering some of the cheapest rates in Europe. Many cruise ships and private yachts include the city on its itineraries. And while you could see most of Nice in a couple of days, many people make it a base for a tour of southern France.

On the day we visited, it was a postcard-perfect sunny day. The city boasts 300 days of sunshine per year, so the odds are in your favor that you&rsquo;ll get the same type of weather.

While the art museums are regarded as among the best in France, it is the bustling coast that attracts the masses.

Along the beach is a wide walkway that separates the sea and the city. The four-mile Promenade des Anglais follows an old road and was designed in 1822. It has changed little in appearance since 1931, and it still offers wonderful vistas.

Below the boardwalk, along the beach, sunbathers catch some rays and restaurants serve the city&rsquo;s signature seafood entrees on the beach.

The beach isn&rsquo;t actually a beach. It&rsquo;s more like a gravel shoreline. Making sand castles is not an option. Although it might not offer much comfort, the one advantage is that you don&rsquo;t have to worry about getting sand in your toes, shoes and blanket.

We tried one of the many seafood restaurants, which occupy whole sections of the beach. Customers follow the stairs from the promenade down to rows of cloth-covered tables with views of the Mediterranean and topless women lying on beach blankets.

The city is known for its gastronomy, especially the seafood. Where we dined, the codfish comes filleted and wrapped into a spiral bouquet topped with red peppers. It looked almost too good to eat.

On a warm day, chilled white wine from the region is the perfect accompaniment.

For dessert, you can&rsquo;t go wrong with the mousse-filled chocolate cupcake. It is moist, full of calories and would satisfy any chocolate lover.

After a long, satisfying lunch, the best option might be to rent a beach chair, have the sea breeze tickle your nose and close your eyes. It&rsquo;s a great place to take a French siesta.

While it is hard to pull yourself away from the tranquility of the beach, the historic section of town is worth the walk.

The tree-lined Albert I gardens is where visitors may find festivals or a concert, depending on the year. It is filled with revelers during the famous Carnival, which has been celebrated here since the 13th century.

On our trip, ice sculptors in the gardens carved their creations underneath a canopy and in front of about a dozen onlookers.

Deeper into Old Nice is Le Cours Saleya. The flower market here is both popular with tourists just off the cruise ship and locals. In addition to the various flowers, the market also sells locally grown fruits and vegetables.

Other shops sell honey, olive oil and an array of spices. You can also find antiques.

Sit at a caf&eacute; and take in the Mediterranean colors of the buildings and you&rsquo;ll see why people compare it to Italy.

Some places offer cr&ecirc;pes, including soccas &mdash; cr&ecirc;pes made of chickpea flour and olive oil.

Near the flower market, peddlers sold old books, including one about the USS Nimitz aircraft carrier in French. Another stall sold old photos, pin-ups from the 1940s and advertisements.

The Heart of Nice is a labyrinth of narrow, cobbled streets filled with baroque churches and shady people who prey on tourists. As we hiked up one narrow passageway, one grungy man followed us before melting back into the crowd. Nice is known for its pickpockets, but he apparently looked elsewhere for his next victim.

One of the popular places to tour is the Lascaris Palace, set in the maze of crooked streets. The nobleman&rsquo;s palace was built in 1648 and was acquired by the city in the 1940s. It is open to the public, but it wasn&rsquo;t on our agenda.

Scattered around the city are 19 museums, including the Matisse Museum in the Cimiez quarter. The museum is inside a 17th-century Genoese-style villa and contains the personal collection of the artist who died in 1954. Every July, a Jazz Festival is held in the gardens of Cimiez. The museum overlooks the Roman baths and an arena.

Perhaps I&rsquo;ll see it next time.

After seeing the Old Town on foot, we continued walking to the harbor, where the wealthy jet-setters from Europe and the U.S. park their yachts.

Cruise ships also make port calls in the harbor. Nice is a favorite stop for the Mediterranean cruise liners that also visit Naples and Malta.

Along the way, you can&rsquo;t help but notice the many Brits and Germans making Nice their vacation retreat or retirement home. The rich and famous visitors must be the reason why there are so many boutiques to shop for designer clothes, shoes and perfume.

There are 7,000 shops and most of them are in the city center. Some are outrageously expensive. One shoe store&rsquo;s cheapest pair ran for $300. Another store had silk ties for more than $500.

It was just a tad out of our price range.

But walking along the beach and feeling the cool Mediterranean water slip between your fingers is free. So, that&rsquo;s where our group eventually ended up toward the end of the day.

Of course, sitting along the beach underneath a canopy would not be complete without another bottle of white wine from Nice&rsquo;s local vineyards. So, that&rsquo;s what we ordered.

It didn&rsquo;t take us long to forget that we missed just about every major landmark in the guidebook.

As the sunbathers dwindled and we neared the bottom of our final bottle, we had no regrets. We had seen and done everything we wanted. And we still enjoyed one of the jewels of southern France.

By car: The A8, &ldquo;La Provencale,&rdquo; links Nice to Aix-en-Provence to the west and the Italian border to the east. It takes about nine hours to travel to Nice from Paris.

By train: There are 20 daily trains from the largest cities in France. La SNCF (French National Railway Co.) provides 11 regular connections from abroad. The high-speed train, TGV, travels from Paris to Nice in 6&frac12; hours. There are four to five connections in the summer and two in the winter.

By air: The Nice-C&ocirc;te d&rsquo;Azur Airport is the second largest in France. More than 8 million passengers travel through each year, and half of them are from overseas. There are 45 airlines making 82 direct connections to 27 countries worldwide and operating a large number of daily flights to and from 30 other French cities.

There are 300 flights a week. There are several daily flights between Paris and Nice.

Only Paris has more hotel rooms. There are nearly 200 hotels, including 21 rated four stars, with more than 10,000 rooms. There also are bed-and-breakfast inns and camping available. Look for lodging at www.nicetourism.com

Nice&rsquo;s Carnival is among the best in Europe. Leading up to Lent, the city is awash with processions of flowers and floats.

In July, the city hosts the Jazz Festival. In August, Nice hosts Musicalia, a festival of music from the south. The concerts are free. In September, the International Festival of Military Music is held (every two years). In December, the area hosts a Christmas village.

For information, go to www.nicetourism.com and click on English.