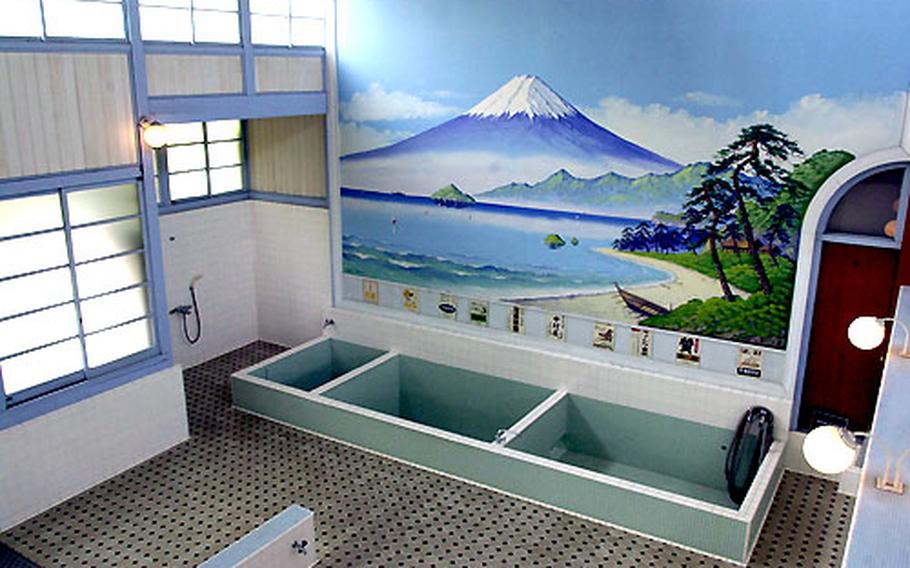 The interior of a bathhouse built in the 1920s. Many of the bathhouses in operation today have the preserved original wall paintings — and 90 percent of those are of Mount Fuji. (Jim Schulz / S&S)

The interior of a bathhouse built in the 1920s. Many of the bathhouses in operation today have the preserved original wall paintings — and 90 percent of those are of Mount Fuji. (Jim Schulz / S&S) 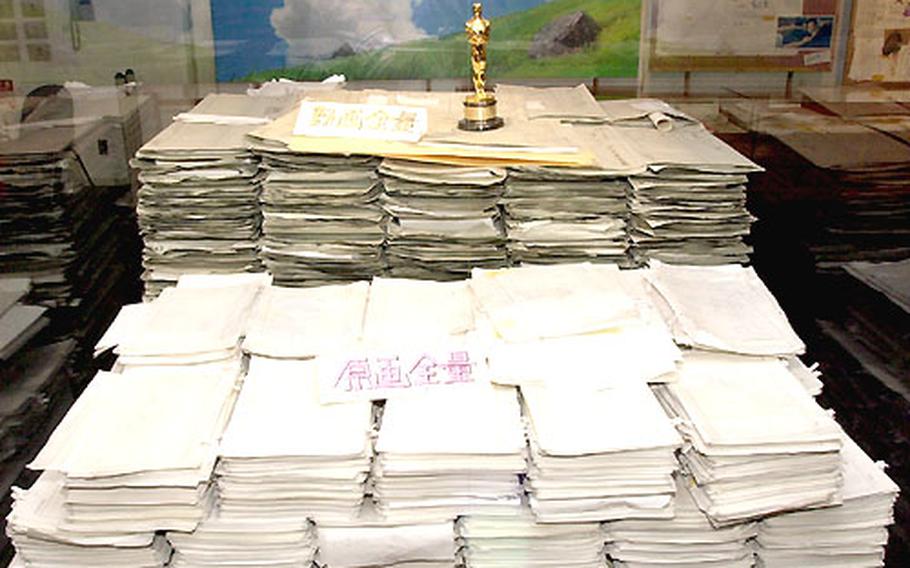 Atop the large pile of raw sketches for the movie “Spirited Away” sits the Oscar the movie won for “Best Animated Feature Film.” (Jim Schulz / S&S) 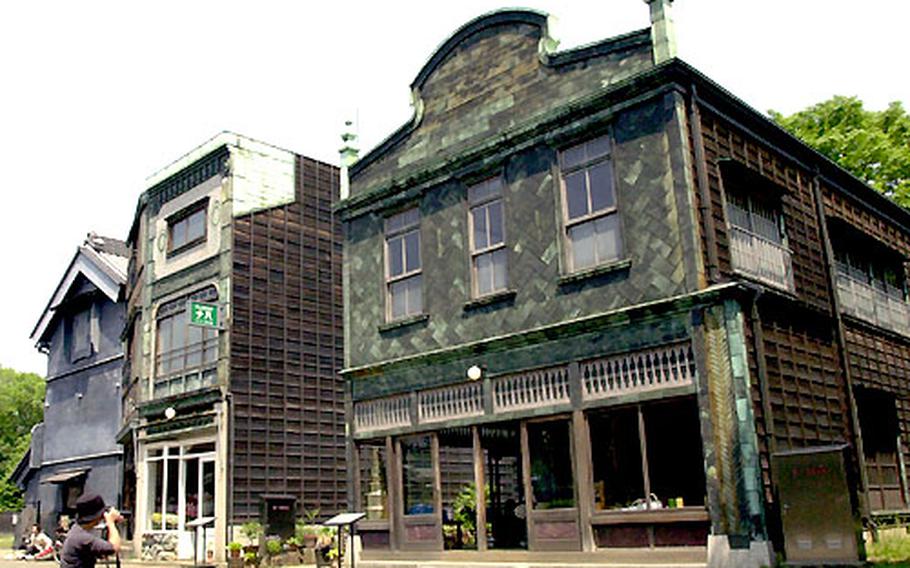 A photographer snaps a photo of a few of the buildings that were built in the 1920’s and were director Hayao Miyazaki’s inspiration for many of the scenes in his movie “Spirited Away.” (Jim Schulz / S&S) 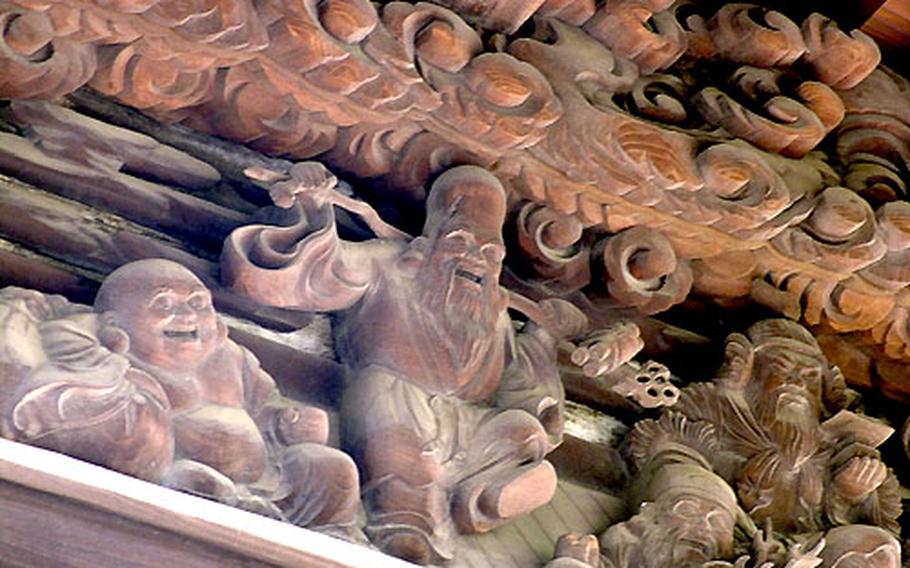 A close-up of the wood carving above the entrance of the 1929 public bathhouse which represents "The Seven Gods of Fortune." (Jim Schulz / S&S) 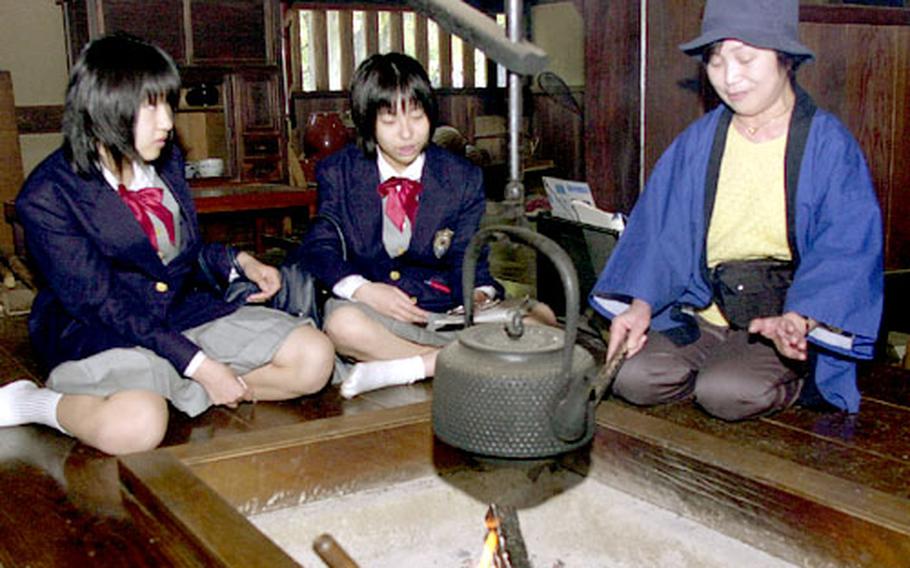 Two girls talk with a volunteer at the Edo-Tokyo Open Air Museum about the old farm house around an irori, an open hearth. The smoke helps to keep insects from destroying the dense hay on the roof. (Jim Schulz / S&S)

The Edo-Tokyo Open Air Architectural Museum includes buildings and houses built in Tokyo mostly in the mid-1800s to early 1900s &#8212; the Edo period of Daimyo warlords and their samurai warriors. The site also inspired animation director Hayao Miyazaki to create the &#8220;mysterious town&#8221; in his landmark film.

Twenty-eight buildings were relocated here, on seven hectares or about 17.3 acres, to preserve the architecture.

The buildings are from a period when many structures were destroyed by earthquakes, fires and floods. The museum is near Studio Ghibli, which produced the &#8220;Spirited Away&#8221; animation; Miyazaki often visited the park, according to park curator Yukihiro Abe.

The open-air museum is divided into three zones. The east zone recreates downtown Tokyo in the early 1900s. Miyazaki was inspired to model the town in the animated film from this zone.

The cityscape of the east zone inspired the film&#8217;s streets. The Takei Sanshodo stationery store, Hanaichi flower shop and Maruni kitchenware store &#8212; all built in early the 1900s &#8212; are similar to the film town. They&#8217;re built in &#8220;signboard-style architecture,&#8221; popular during rebuilding after the Great Kanto Earthquake of 1923. Signboard-style architecture has a flat facade affixed to the wooden building like a screen. The building&#8217;s front is usually tiled with copper.

The center zone houses traditional Japanese architecture including a mausoleum, which stands in front of the museum entrance. The Jisho-in mausoleum was built in 1652 to enshrine one of the wives of Generalissimo Iemitsu Tokugawa, the third shogun or military chief &#8212; Japan&#8217;s de facto national leader.

The west zone consists of residential houses &#8212; including farmhouses dating to the 1800s. The structures have earthen floors, open hearths and thatched roofs. The park&#8217;s volunteer workers build fires every day to keep the thatch bug-free. They also perform activities the original occupants likely performed at that time of year.

Just a short train ride from Tokyo&#8217;s megalopolis are 17 acres of buildings that offer a passport to a Japan of small farmers, shopkeepers and samurai.

And you don&#8217;t even have to traverse a tunnel to get there.

Take the JR Chuo line to Musashi Koganei Station, then take a bus at Bay 2 or 3 at the north exit of the station. Get off at &#8220;Koganei Koen Nishi Guchi&#8221; bus stop. From there, the museum is a five-minute walk. You also can board a bus at Bay 4 bound for Mitaka station&#8216;s north exit. Get off at &#8220;Edo-Tokyo Tatemono-En Mae&#8221; bus stop.Admission is 400 yen for adults and 200 yen for students younger than high school age and adults 65 or older. Admission is free for children younger than elementary school age. The museum is closed Mondays or the following Tuesday if Monday is a national holiday or a substitute day for a holiday.

The museum&#8217;s Web sites, with more details, are at http://www.edo-tokyo-museum.or.jp/tatemono-e/guide.htm.