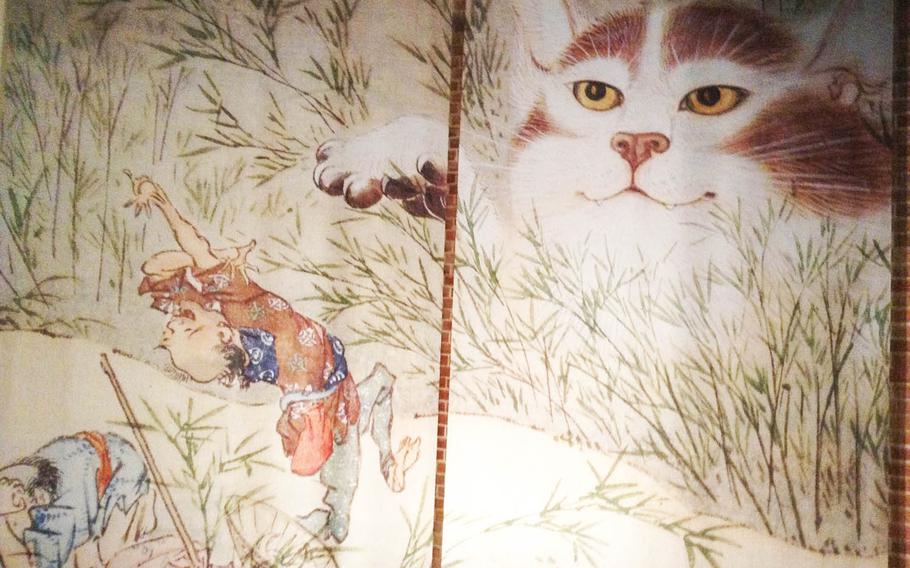 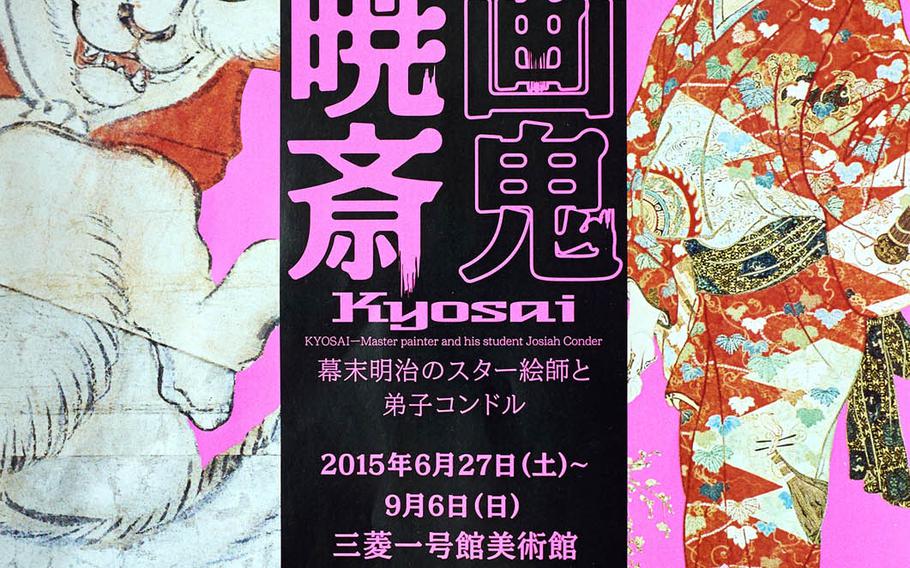 Works by Japanese artist Kawanabe Kyosai and others from his English student, architect Josiah Conder, will be on display at the Mitsubishi Ichigokan Museum in Tokyo through Sept. 6, 2015. (James Kimber/Stars and Stripes)

Perhaps only in Tokyo could a piece of art whose title translates to “the battle of the farts” command a place in one of the city’s finest galleries.

The caricature, which depicts 19th century Japanese gas warfare, is one of 120 often humorous works by Kawanabe Kyosai (1831-99) and others from his English student, Josiah Conder, on display at the Mitsubishi Ichigokan Museum through Sept. 6.

The son of a samurai, Kyosai’s life spanned the transition from the Edo to Meiji periods, and he saw his country change from a feudal society to a modern state. Considered Japan’s first political caricaturist, he also sketched subjects from Japanese folklore and created scenery for theaters in Tokyo.

Some of the more interesting works on display at the Ichigokan include a drawing of a tiger Kyosai produced after seeing one of the big cats in the flesh for the first time — a rare sight for any Japanese in those days.

Many of his works show animals dressed and acting like humans. In one painting, a group of frogs have caught a snake in a snare. Another depicts a creature from Asian mythology, the nine-tailed fox. Critics suggest the fox symbolizes Western powers, and that two men in the picture represent India and China, using Mount Fuji as bait for the fox.

Kyosai was also fascinated with the macabre. He used to watch the executions of convicted criminals and tried to draw their facial expressions at the moment of death, according to the exhibit’s audioguide.

A screened-off portion of the exhibit, where entry is barred to children under 18, includes some ribald sketches of men and women engaged in sex acts. More humorous than pornographic, the sketches depict excessively endowed people in all sorts of compromising situations.

Kyosai’s work is being shown alongside paintings by Conder, an English architect who arrived in Japan in 1877 at the invitation of the Meiji government. He designed the Ichigokan, along with a number of other Tokyo landmarks. When he wasn’t designing buildings, Conder studied painting under Kyosai and introduced Kyosai’s work overseas.

Food: There is an outdoor cafe in a courtyard behind the museum.