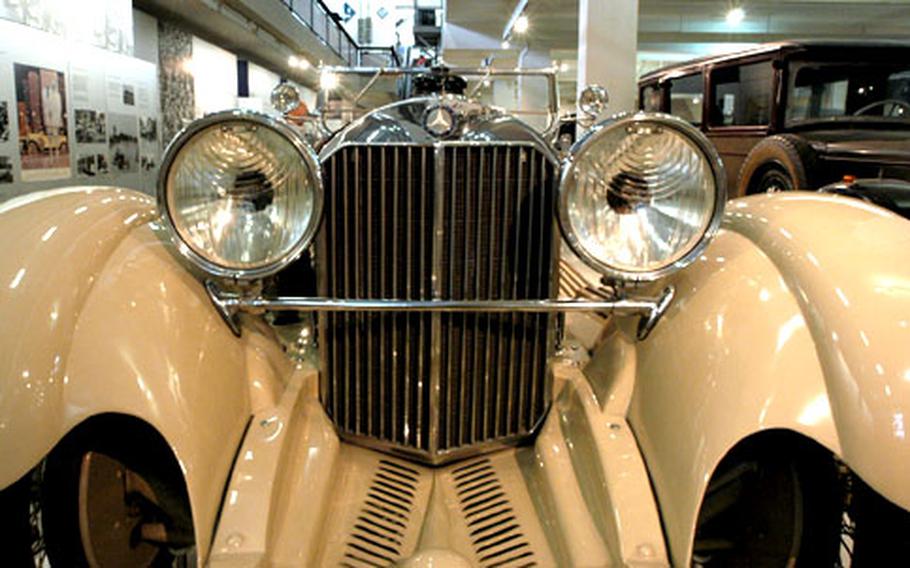 Eye-to-eye with a 1929 Mercedes Benz SS at the Deutsches Museum in Munich. (Michael Abrams / S&S)

Eye-to-eye with a 1929 Mercedes Benz SS at the Deutsches Museum in Munich. (Michael Abrams / S&S) Visitors check out aircraft in the aviation hall of the Deutsches Museum. (Michael Abrams / S&S) 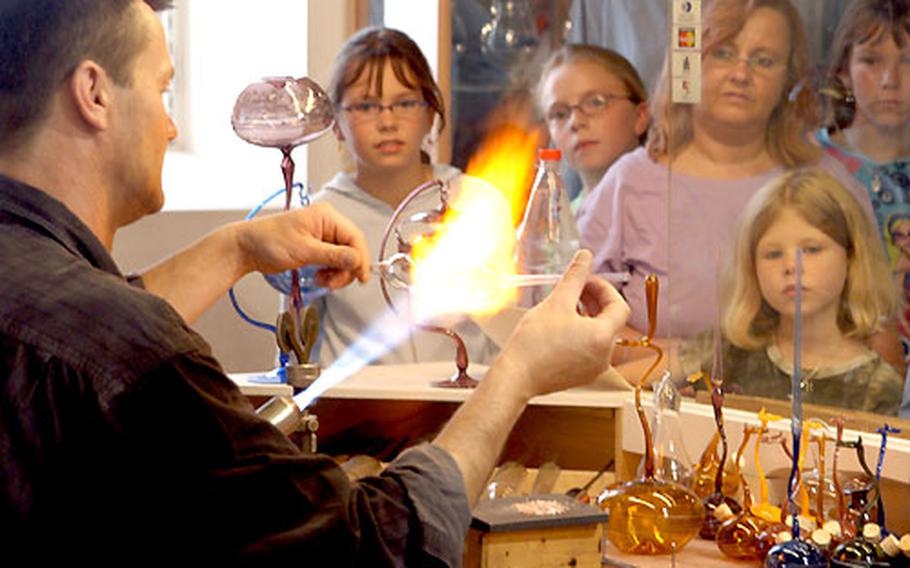 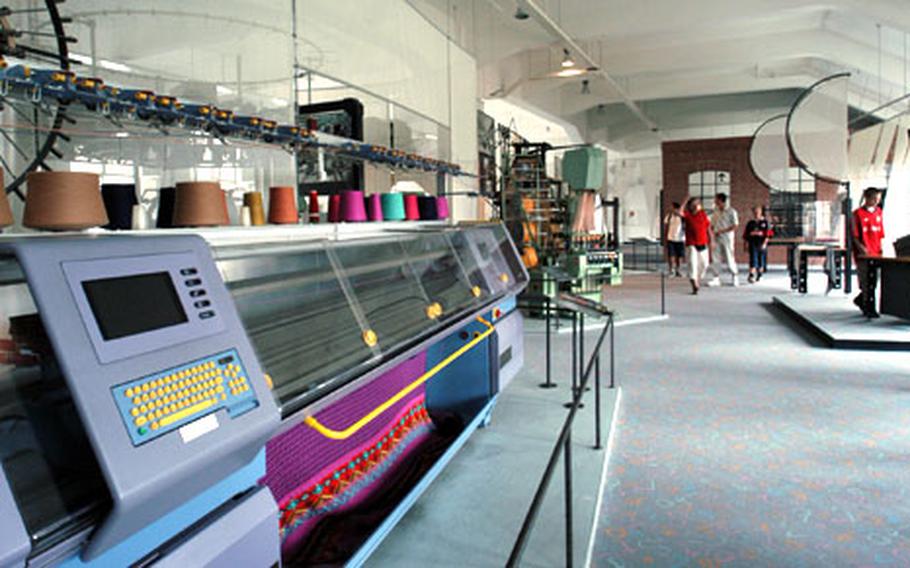 An automated loom weaves a carpet in the textiles department at the Deutsches Museum. (Michael Abrams / S&S) 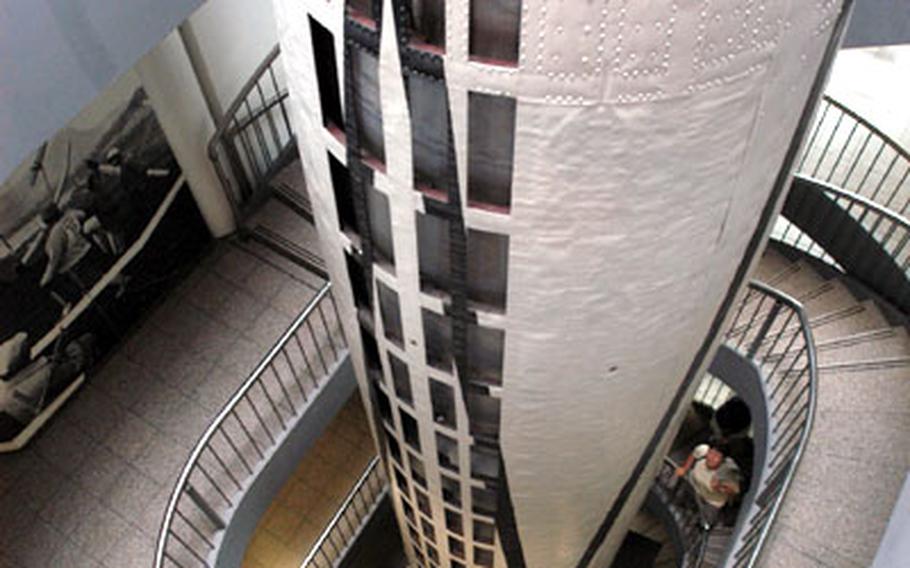 A stairway encircles a model of a V2 rocket as itv climbes the floors of the museum. (Michael Abrams / S&S)

It is billed as the world&rsquo;s largest technological museum. Spend five hours walking around Munich&rsquo;s Deutsches Museum, and you&rsquo;ll have no trouble believing the claim.More than 50 exhibitions on five main floors, covering almost 152,000 square feet, mean there is a lot to see.

Exhibits reach from the depths of the ocean to the reaches of outer space. Here is just a small selection of what there is to see: marine navigation; planes, trains and automobiles; musical instruments; aeronautics; textiles; engineering; astronautics; astronomy and chronometry.

Pick up a free brochure with floor plan at the ticket counter, and, for 4 euros, the 144-page museum guide and you are off to discover just about everything man has ever invented.

The floorplan has the exhibits numbered to lead you through the museum, starting with the door on your left. But to get an idea of what you&rsquo;re in for, walk straight through the rotunda to the marine navigation exhibit in Room 10.

Dominating this high hall is the Maria, a wooden sailing ship built in 1880. High above, models of zeppelins, balloons and vintage airplanes hang from the ceiling. The walls are lined with models of ships, and, on a balcony running around the hall a story above, there are displays tracing the history of flight from the Montgolfier brothers to the Wright brothers.

In the basement, appropriately enough, is the U1, the first German submarine, built in 1906.

The aeronautics hall stretches over two stories, featuring jets, helicopters, a section of an air traffic control tower and a display on Munich&rsquo;s Franz-Josef-Strauss Airport.

On the second floor, try your hand at keeping an airplane flying straight. The simulator won&rsquo;t faze a fighter pilot, but a novice might be surprised that it is not as easy as it looks.

Astronautics, with displays of rockets, satellites, manned spaceflight and a moon rock tops this section of the Deutsches Museum.

The museum offers tours and demonstrations in the various sections, but unfortunately they are only in German. This won&rsquo;t stop you, though, from watching a glass blower work his magic (you can buy the objects he makes), or see how bricks are made at the miniature brick plant. You can watch a paper-making machine or take the hourlong mining tour, a highlight for many. The days and times for the tours and demonstrations are in the free brochure.

That man was creative long before he set sail in ships or invented the airplane is evident when you look at the paintings of bison and deer on the ceiling of the Altimira cave. The real cave is in Spain, of course, and no longer open to the public, but at the Deutsches Museum they have made an exact copy of the 15,000-year-old Stone Age paintings.

Almost as anachronistic as the cave paintings are the early computers on display at the museum. Huge, yards-long monsters with the computing power of a palm-size computer of today.

From Stone Age paintings, to man&rsquo;s early attempts at flight, to the satellite-powered telecommunications of today, a walk through Munich&rsquo;s Deutsches Museum shows that, through the centuries, we&rsquo;ve come a long way, baby.

How much: Admission is 7.50 euros for adults and 3 euros for children. Kids under 6 are admitted free. A family ticket costs 15 euros.

Eats: There is a restaurant, a cafeteria, a snack bar and a coffee bar at the museum. For a good Italian pizza after your visit, check out Il Cappuccino on Kohlstrasse, across the Bosch bridge as you exit the museum.

For sale: The Museum Shop is worth a visit. It sells guidebooks, catalogs, science and technology books in English and German, postcards and model construction kits, including an F-15 with a tail number from Spangdahlem Air Base, Germany.

If you like museums, Munich is the city for you. The Bavarian capital has more than 40 of them, from art to automotive to the obscure. Here are some examples:

&para; Art lovers will want to head to the trio of museums known as Pinakotheks. The Alte Pinakothek displays European art from the 14th to the 18th century; the Neue Pinakothek features 18th- and 19th-century art; and the new Pinakothek der Moderne exhibits 20th-century and contemporary art.

&para; For the history of the city, visit the M&uuml;nchner Stadtmuseum (Munich City Museum) on Sankt-Jakobs-Platz.

&para; Automobile fans might want to check out the BMW Museum next door to the car factory.

&para; Royal watchers can visit the Residenz and see the treasures of the House of Wittelsbach in the Residenz Museum and Treasury.

&para; In the Altes Rathaus on Marienplatz is the Spielzeugmuseum (Toy Museum), and further down the street named Tal, look for a little passageway with a sex shop in it. Walk PAST the sex shop and you come to ZAM &mdash; The Center of Unusual Museums. In one building you can visit the Sisi Museum (she was an empress of Austria), the Easter Bunny Museum, the Chamber Pot Museum, the Pedal-car Museum, the Bourdalou Museum and the Museum of Scent.