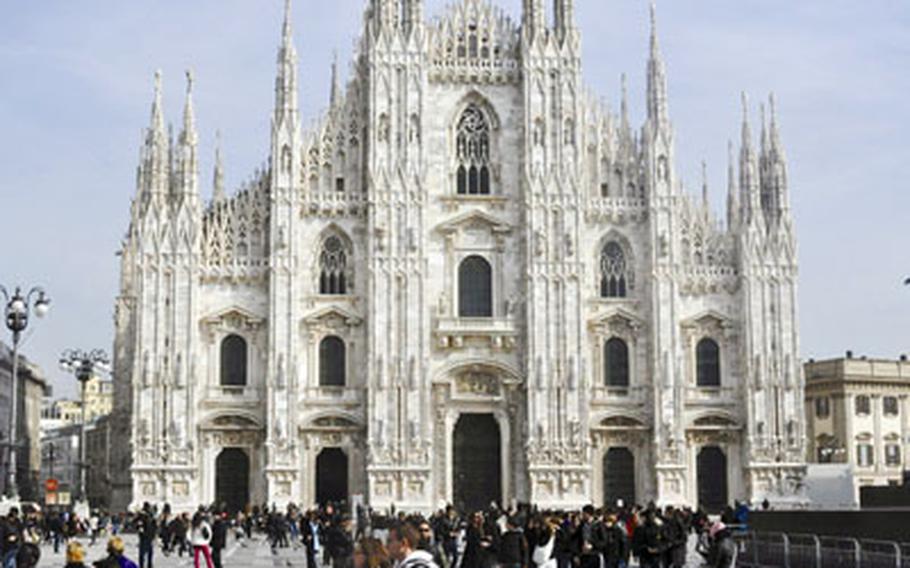 Buy Photo
Milan’s Piazza Duomo, one of the nicest public squares in Europe, is dominated by its Gothic cathedral. The heavily ornamented structure took about four centuries to construct. (Photos by Kent Harris/Stars and Stripes)

Buy Photo
Milan’s Piazza Duomo, one of the nicest public squares in Europe, is dominated by its Gothic cathedral. The heavily ornamented structure took about four centuries to construct. (Photos by Kent Harris/Stars and Stripes) 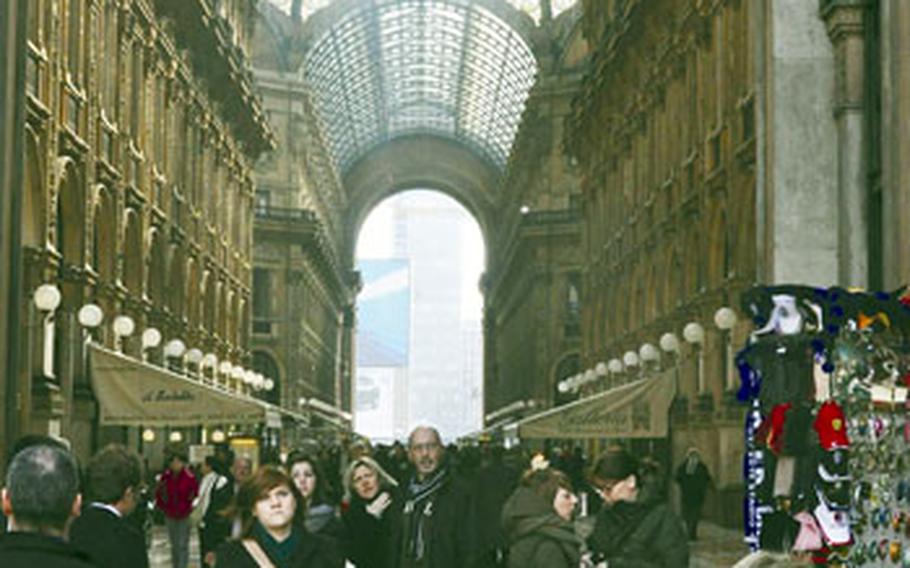 Milan is the fashion and financial capital of Italy. Both aspects are displayed at the Galleria Vittorio Emanuele II, one of the first covered malls in Italy. It was built from 1865 to 1868 and is still one of the city’s most recognized shopping areas. () Hundreds of statues decorate the exterior of Milan’s cathedral. Many depict biblical or religious figures. ()

No city in Italy &mdash; not even eternal Rome &mdash; can top Milan when it comes to fashion and finance.

So it&rsquo;s easy to see how those coming to the city to check out one of the finest Gothic cathedrals in the world might get sidetracked into a shopping spree or two. Or three.

The Duomo of Milan may dominate one side of Piazza Duomo &mdash; one of the most popular and busiest plazas in Europe &mdash; but it&rsquo;s commerce that borders most of the remainder of the square and the surrounding blocks. Names such as Prada, Louis Vuitton and Ferrari line the numerous shops in the area. And there&rsquo;s a giant TV screen in the square that quickly grabs the attention.

Not that the cathedral is easy to ignore.

Begun with the laying of a stone in 1386, the massive structure took parts of four centuries to complete. And seemingly every year since to maintain or restore in some fashion &mdash; scaffolding and the church go together like peanut butter and jelly.

But the facade of the cathedral is currently scaffold-free, leaving its scrubbed stonework and statues almost painfully bright on a sunny day.

The sunglasses need to come off for a visit inside, though, because hundreds of stained-glass windows spread out across the structure heavily filter the sun coming through. The ceilings are high enough and the aisles wide enough that one could imagine a helicopter flying through.

That&rsquo;s definitely not the case, though. Visitors are requested to remain quiet and respectful. And in order to get to helicopter height, you&rsquo;ll have to pay to take an elevator or climb the stairs to the roof outside.

The Galleria Vittorio Emanuele II, just a few steps away, has a distinguished history of its own. Built from 1865 to 1878, it was one of the first enclosed shopping malls in Italy. A few other malls have opened in surrounding blocks, but Vittorio Emanuele remains the most famous. It has a few dozen shops and restaurants. High-end fashion intermixes with specialty shops, cafes and a McDonald&rsquo;s. A glass ceiling looms far overhead. A bookstore takes up three floors and features English-language selections in the basement (at European prices). Walk through the galleria to reach Piazza della Scala, where it might be possible to catch an opera performance some night at La Scalla theater.

Milan offers a number of other attractions within a short walking distance of the cathedral, such as Castello (castle) Sforzesco and the Chiesa di Santa Maria delle Grazie church, which houses da Vinci&rsquo;s "The Last Supper."

But those shopping bags won&rsquo;t carry themselves. So it might be better to visit these attractions when shopping&rsquo;s not part of the agenda. If that&rsquo;s possible.

Milan is off A4 autostrada, which runs across the north of Italy and is about a 90-minute drive from Vicenza and twice that from Aviano. The best way to reach the center if you&rsquo;re driving is to exit A4 onto the A51, the ring road. Ignore the main highway signs directing vehicles to continue on the A4 for Milan and take the exit for the center and Linate airport. After a few miles, take the exit for Cascina Gobba. Note the "M" and "P" on the signs: "M" stands for metro, which you&rsquo;ll soon be taking; "P" is for parking. The multistory parking garage, less than a block from the Cascina Gobba exit, is right next to a metro station. Parking is cheap. Buy metro tickets (1 euro each) at the tobacco shop inside the station. Take Line 2 (green) toward Abbiategrasso. Go six stops and transfer to Line 1 (red) at Loreto. Then go five more stops to the Duomo station. A train ride from Pordenone takes about four hours and costs 35 euros round trip. It&rsquo;s quicker (two hours) and cheaper (22.50 euros) from Vicenza. The duomo, or cathedral, is only four metro stops from the station on Line 3 (yellow).

There is an array of restaurants bordering Piazza Duomo and in the surrounding blocks. Choices on the square include McDonald&rsquo;s and the European fast-food joint Autogrill. For better Italian food, stop by the tourist office and ask for recommendations. Or try this one: Bottiglieria da Pino, via Cerva 14. The small restaurant is about a 10-minute walk from the square and features a menu that changes daily. Reasonable prices and good food make it a (crowded) favorite for locals. Plan on sharing a table and keeping the elbows tucked in.

A city tourist office is just off the square, to the left of the entrance to the Galleria Vittorio Emanuele II and down the stairs. Hours are 8:45 a.m. to 1 p.m. and 2-6 p.m. daily, cosed an hour earlier on Sundays. Telephone is 02774-04343; Web site is www.visitamilano.it. There&rsquo;s another office at the train station.