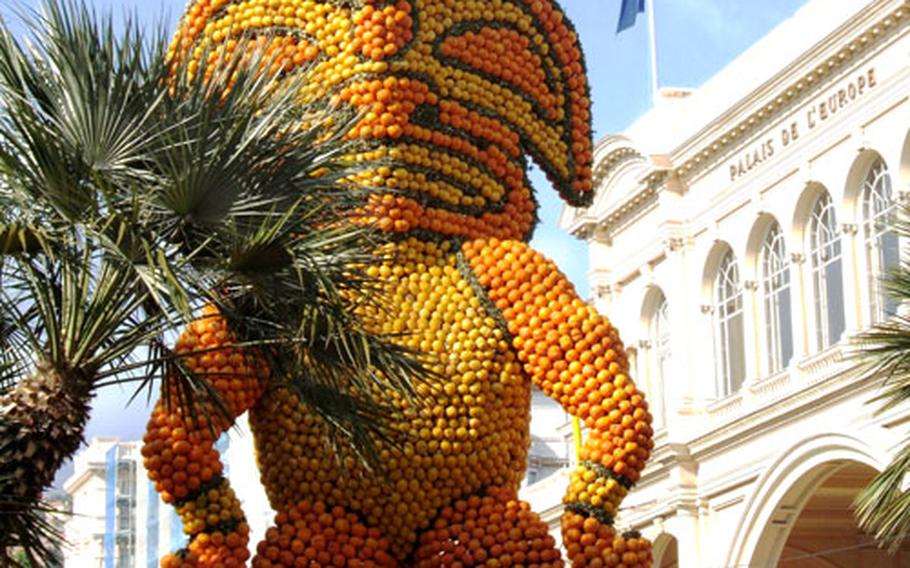 One of the impressive creations at the 2008 Lemon Festival is this massive creation made of lemons and oranges and resembling a South Seas statue. (Leah Larkin / Special to Stripes)

One of the impressive creations at the 2008 Lemon Festival is this massive creation made of lemons and oranges and resembling a South Seas statue. (Leah Larkin / Special to Stripes) 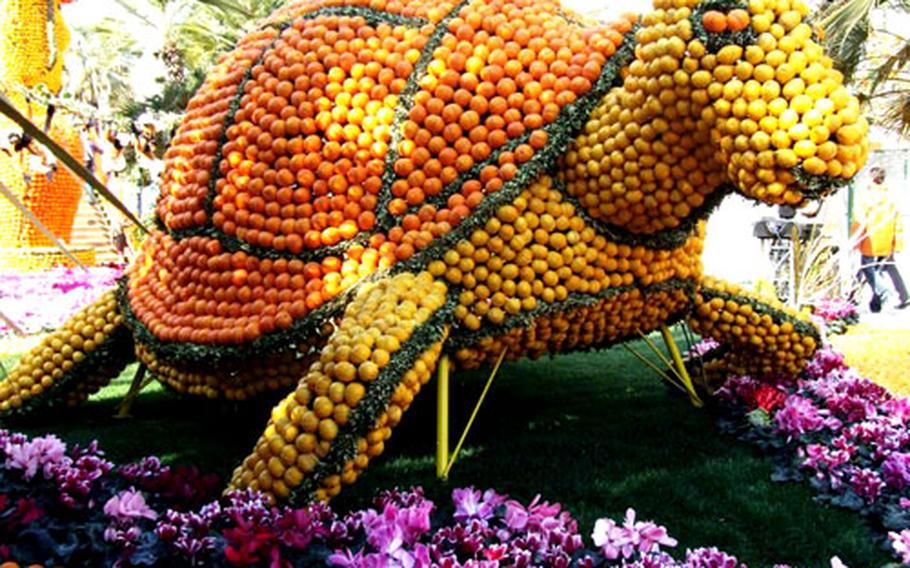 A large tortoise made of lemons and oranges occupies a place of honor in a Menton park during th 2008 Lemon Festival. (Leah Larkin / Special to Stripes) A fire-breathing dragon clutches a pirate and his raft in one of the displays created from 145 tons of lemons, oranges and other citrus fruits at the Lemon Festival in Menton. (Leah Larkin / Special to Stripes) A hunter with rifle and walking stick sits in the doorway to a stable with his two burros nearby. (Leah Larkin / Special to Stripes) 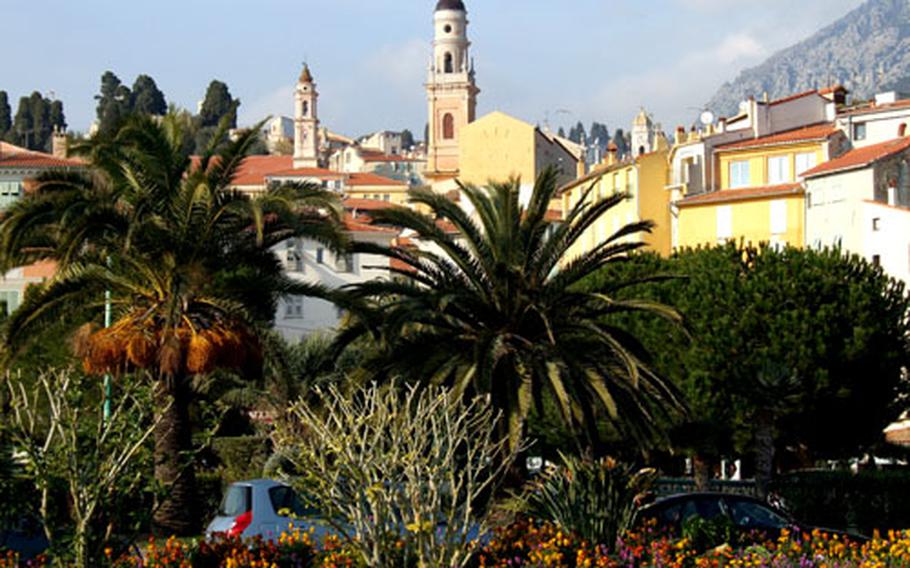 The bell tower of the baroque Saint Michael basilica juts above the rooftops in Menton, France, a city of palms and flowers and the annual lemon festival. (Leah Larkin / Special to Stripes)

This French Riviera city on the border with Italy is the lemon capital of France. It has been celebrating the lemon with festivities every year since 1929. The festival, this year from Feb. 13 to March 4, continues to grow in popularity, attracting nearly a quarter-million visitors who come to admire amazing sculptures and exhibitions made from 145 tons of citrus fruits.

The Jardin Biov&egrave;s, a long promenade lined with the mammoth fruit constructions, is the center of activity. An elevated ramp in the middle is especially popular with the camera crowd, which lines the steps for overviews of the scene. Stands selling fruit, citrus liqueurs, soaps, jams and postcards are also popular gathering spots.

Held in conjunction with the festival &mdash; the F&ecirc;te du Citron, in French &mdash; are an International Orchid Festival and Menton Crafts Fair at the Palais de l&rsquo;Europe. The orchids, in numerous varieties, sizes and colors, are outstanding.

Menton&rsquo;s microclimate with more than 300 sunny, temperate days per year, is ideal for growing lemons. There are some 80 varieties of the fruit, but it&rsquo;s the Menton lemon that is prized by chefs for its perfume, zesty flavor and pulp, and high sugar content.

If you visit the Lemon Festival on a Friday, head across the border to Ventimiglia, Italy, where an enormous outdoor market is held along the seafront offering bargains in clothing, leather goods, tablecloths, Italian delicacies and more.

Whenever you visit, take time to see some of the city. Menton, which was originally part of Italy, became the property of Charles Grimaldi, Lord of Monaco, in 1346. In 1848 it broke away from Monaco, becoming a free city, and in 1860 became part of France.

By the late 19th century it was on the map as a popular tourist spot on the Riviera. The Russian aristocracy and wealthy English tourists flocked to what was then a health resort. Palaces and elaborate villas soon followed &mdash; many becoming the sites of spectacular gardens. English botanists took advantage of the sub-tropical microclimate and introduced rare tropical plant species that still flourish in the city&rsquo;s numerous gardens, such as the Maria Serena Villa and Garden and the Fontana Rosa. The latter blends ceramic d&eacute;cor with lush plants.

Also take time to wander through the narrow medieval alleys of the old town. Visit Saint Michael Basilica, the city&rsquo;s ancient and grandiose church which dates back to 1619, and the Jean Cocteau museum, a small 17th-century fort that the painter and poet helped renovate as a place to display his work. One of Cocteau&rsquo;s masterpieces, a gigantic painting of eternal lovers, covers a wall in the city&rsquo;s Wedding Hall which is open to visitors. The Japanese, who are great admirers of Cocteau, flock to Menton to tie the knot in this room.

Photojournalist Leah Larkin is a member of the Society of American Travel Writers and lives in Provence, France. Contact her through www.leahlarkin.com.

Know and go ...Admission to the festival&rsquo;s citrus displays costs 9 euros for adults and 6.50 euros for children ages 6 to 14.

The lemon festival also features a parade with citrus floats, costumes, masks and music at 2:30 p.m. on Sundays, Feb. 15 and 22 and March 1. A moonlit parade ending with fireworks will take place on Feb. 19 and 26 at 8:30 p.m. There is an extra charge for admission to these events.

Find more on the Lemon Festival at www.feteducitron.com; there is an English-language version.

Find more on Menton at www.villedementon.com; there is an English version.