Maspalomas: It's always party time in the Canaries 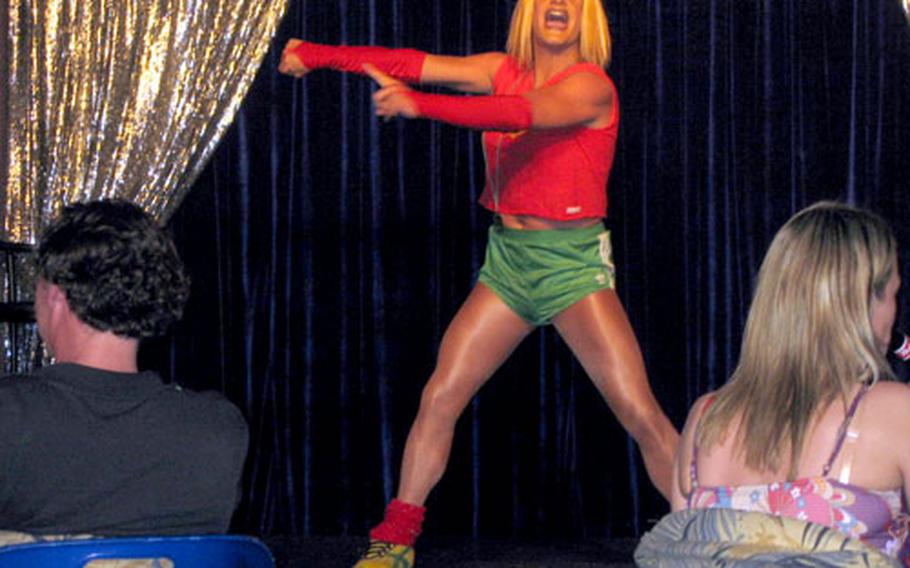 Aerobics, anyone? One of the acts at Ricky’s Cabaret Bar in Maspalomas, Canary Islands. The show starts at about midnight and continues for over an hour. Admission is free. (Karen Bradbury / S&S)

Aerobics, anyone? One of the acts at Ricky’s Cabaret Bar in Maspalomas, Canary Islands. The show starts at about midnight and continues for over an hour. Admission is free. (Karen Bradbury / S&S) 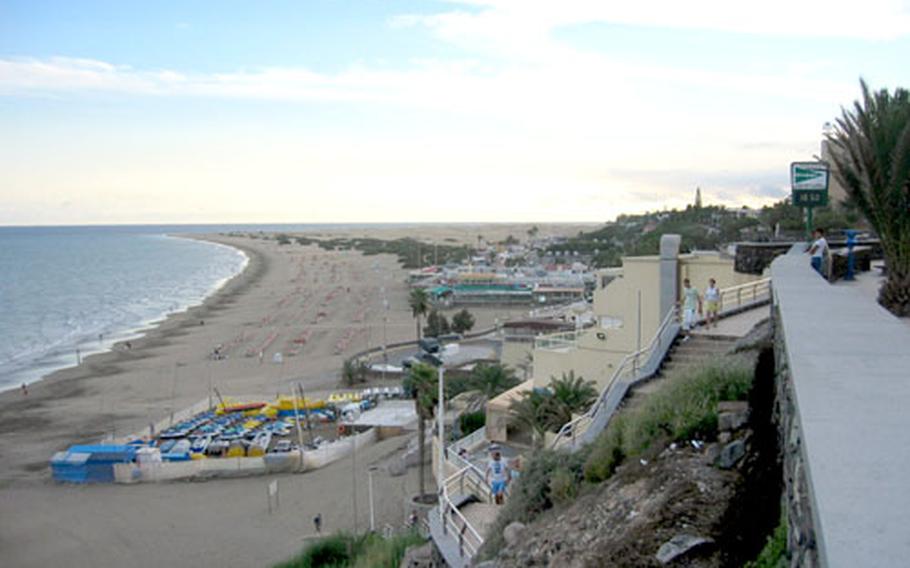 When you’re not partying, shopping or on an amusement ride in Maspalomas, Canary Islands, you can rest on the beach. This is a view of the Playa del Ingles, looking toward the southern tip of the island. (Karen Bradbury / S&S)

We arrived at Maspalomas&rsquo; International Airport after 2 a.m. and were taken directly to our hotel about 30 miles away. We stumbled straight into bed in hopes of getting an early start that morning: We were in the Canaries for only a three-day weekend, and the clock was already ticking.

In the morning, I stepped onto our balcony to inspect the surroundings. Directly below was an inviting, well- maintained swimming pool, its aqua waters in sharp contrast to the dark blue of the Atlantic beyond. To the right stretched a long golden swath of sand, the Playa del Ingles. The day was clear and already warm, so we dressed and headed off to find breakfast.

The shops, bars and restaurants comprising the commercial area of Playa del Ingles evoke anything but traditional charm. Think &ldquo;strip mall,&rdquo; not &ldquo;quaint village,&rdquo; for the accurate mental picture.

It becomes immediately apparent to whom the merchants are catering &mdash; primarily the British and the Germans in both merchandise and language. We were amused at the restaurants&rsquo; tell-tale use of language and images in their advertising: Signs reading &ldquo;Fr&uuml;hstuck&rdquo; were next to photos of boiled eggs and cold cuts; &ldquo;breakfast&rdquo; was used to describe plates of bacon, sausage and fried eggs.

After chowing down on a good breakfast at a set-menu price of just over 4 euros, and shopping for provisions for the room at a handy Spar market (where in Europe are they not?), we headed back to the hotel and then a stroll through town.

Whatever keeps crowds going to Maspalomas, it&rsquo;s not the beauty of the urban landscape. The town is a sprawl of hotels &mdash; mostly two- and three-star quality &mdash; shops, malls, entertainment centers, restaurants and bars. This is a city that owes its lifeblood to one thing: tourism. Check out some of the street names &mdash; Avenidas del Touroperador Tui and Neckermann, Avenida Lineas Aereas Lufthansa. The city map resembles the yellow pages listings for travel agencies.

Names of some of the establishments, such as the H. Rock Cafe and Chilis, are suspiciously reminiscent of better- known chains and bound to bring a snicker.

Prices, on the whole, seem geared toward the masses. They are comfortably perched on an imaginary line at which tourists readily open their wallets while merchants still prosper. Most vendors, even in shops, seem open to bargaining. Restaurants offer buffet meals for 6 to 8 euros a head, and a half-liter of beer will set you back about 3 euros.

But beware the time-share pitches, that go something like this: Man approaches you on street and informs you that he&rsquo;s with the tourist board. Man gives you a scratch card. You scratch card and see you have won 500 euros! You visit address where prize is to be claimed and waste a good day of your vacation time being exposed to time-share offers.

You realize, after wasting several precious hours, that it&rsquo;s all a hoax. Or worse, you realize only too late. Is this really what you&rsquo;ve been saving up for?

Do you fancy yourself a master of less-than-extreme sports? Does a good round of mini-golf get your blood flowing?

If so, you&rsquo;ll find nearly a dozen courses in varying states of repair. How about air hockey? There&rsquo;s plenty of that, too.

Maybe you&rsquo;re not so much sporty as brave. Consider a trip up the Skyrider, a two-seated amusement ride that looks like an oversized whiffle-ball on a tether and sends you flying into the air on a reverse-Bungee ride.

The spiritual center of Maspalomas is, fittingly, one of its largest shopping complexes, the Yumbo Centrum. A conglomeration of restaurants, pubs, bars, shops and arcades, there truly is something there for everyone. Scandinavians, Germans, Irish and Dutch can all claim space among their own. The accent is heavy on gay, so if you&rsquo;re put off by that, steer clear.

Our hands-down favorite among the dozens of clubs to choose from was Ricky&rsquo;s Caf&eacute;, with its fabulous nightly drag show, no admission charge and welcome to all. The &ldquo;hostesses&rdquo; begin the evening by gauging the audience and asking folks where they are from, in order to tailor insults accordingly. Witty and raunchy, it&rsquo;s all good fun.

No day in Maspalomas is complete without a stroll along the beach. With its dark, golden sands and dark blue waters, the Playa del Ingles reminds more of an Atlantic beach than a Mediterranean or Carribean one, which makes sense, given that it is indeed the Atlantic you are facing.

Air mattress surfers will appreciate the waves, not massive but enough to give you a 30- to 40-foot-long thrill ride back into shore. A bit of kite-surfing goes on as well, although nobody out on this particular day looked poised to take home medals. And if you are just out for a stroll, there&rsquo;s a nice walk to a lighthouse an hour away.

As a fitting conclusion to the daytime hours, stroll along the Paseo Costa Canaria. This wide boulevard meanders alongside the water&rsquo;s edge at a height of up to several hundred feet above sea level.

For night owls, it&rsquo;s time for a quick nap. Don&rsquo;t worry if you sleep until 10 or 11 p.m. &mdash; no matter how late you doze, you won&rsquo;t sleep through the dinner hour, and you&rsquo;ll be ready for a night at a sports bar, the Irish pub, a dance club, disco or drag show.

Since our time on the island was so short, we chose not to rent a vehicle, which would have afforded us the chance to visit other parts of the island. But maybe that wasn&rsquo;t a tragedy after all. Friends who traveled to the island in January did rent a car and venture into the mountains, but after several hair-raising encounters on hairpin curves, they elected to return the vehicle several hours before it was due back.

Our three days on the island whizzed by, and I recommend it for others looking to escape the cold. Prices for package trips including flight and lodging at a three-star hotel hover at about 600 euros, and last-minute specials are often available at discounts of half the price or more.