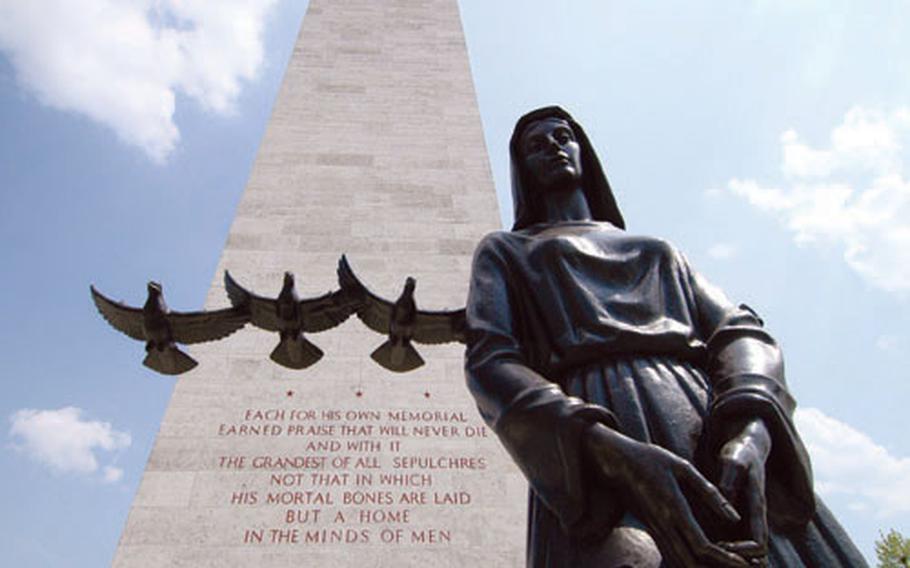 The bronze sculpture known as the Mourning Woman, in front of the tower on the court of honor at Netherlands American Cemetery in Margraten, Netherlands. (Michael Abrams / S&S)

The bronze sculpture known as the Mourning Woman, in front of the tower on the court of honor at Netherlands American Cemetery in Margraten, Netherlands. (Michael Abrams / S&S) Some of the 1,722 names of missing American servicemembers inscribed in one of two walls at Netherlands American Cemetery in Margraten, Netherlands. (Michael Abrams / S&S) 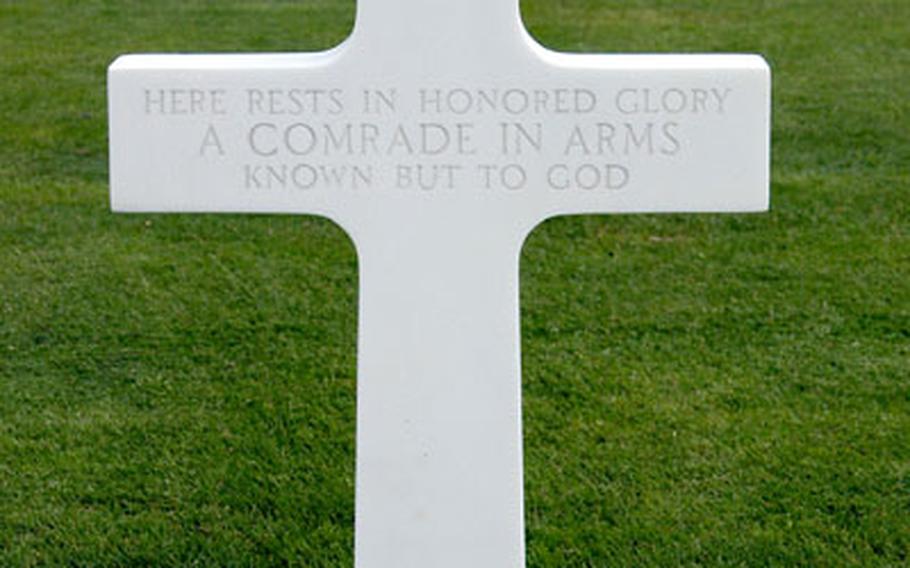 A cross reading "Here rests in honored glory a comrade in arms known but to God" marks the grave of an unidentified American service member at Netherlands American Cemetery at Margraten, Netherlands. 106 of the 8,301 American war dead buried there are unknowns. (Michael Abrams / S&S) As a student of the history of World War II, I have visited many historical sites. Normandy, Nijmegen, Bastogne and the H&uuml;rtgen Forest is a short list of places I have been where the fighting was heavy and the cost in lives high.

Most of these places reveal little evidence of the horrors of war. Time, nature and man have worked, almost conspiratorially, to erase the scars on the landscape. Many times it is necessary to travel well off the beaten path to find a monument or other reminder that war loomed large in our not-too-distant past.

But not always. The American Battle Monuments Commission maintains 21 cemeteries in Europe and North Africa where U.S. military members killed during the two world wars are buried. These are places where the reminders of the wars are easy to see and where it is possible to honor those who gave their lives for their countries.

As every servicemember moved into combat, it was done knowing that each day, each hour, even each minute might be the last. Sometimes death was swift; sometimes slow and agonizing. Some men got the &ldquo;million dollar&rdquo; wound, which got them a trip home, while others faced years of hospitalization, rehabilitation and disfigurement. Many who were not hurt physically carry emotional scars to this day, even though more that 60 years have passed.

Sadly, thousands who paid the ultimate price for the freedom have never been recovered. About 78,000 Americans who went off to World War II are listed as missing. Eight thousand of them are buried in American cemeteries as unknown soldiers.

Between 1945 and 1951, more than 230,000 U.S. servicemembers killed during World War II were repatriated from cemeteries worldwide. However, many families believed it more appropriate for them to stay with comrades near the battlefields where they died. As a result, more than 93,000 men and women are buried in American cemeteries around the world.

One of these is the Netherlands American Cemetery and Memorial near the small town of Margraten in the South Limburg region of the Netherlands. A more hallowed piece of land would be hard to find. Margraten was liberated on Sept. 13, 1944, by elements from the 30th Infantry Division (Old Hickory), the 2nd Armored Division (Hell on Wheels), the 1st Infantry Division (Big Red One), and the 113th Cavalry Group.

When Lt. Gen. William H. Simpson&rsquo;s Ninth U.S. Army assumed command of the area, Simpson realized that breaching the vaunted Siegfried Line and advancing into Germany was going to be a costly endeavor in terms of soldiers&rsquo; lives. Recognizing the psychological aspects of war, Simpson assured his men that none of them would be buried on enemy soil.

The responsibility for preparing a cemetery on friendly soil fell to Capt. Joseph Shomon and his 611th Quartermaster Graves Registration Company, along with the 3136th Quartermaster Service Company. When bulldozers began to clear the ground at the first site selected by Shomon, they came under enemy artillery fire, so another site had to be located. This new one, about a mile outside Margraten, is where the cemetery is located today.

During the period of repatriation, the German and Allied soldiers were returned to their home countries, along with many of the Americans who had been buried at Margraten. From its peak of almost 22,000 dead, the cemetery today is the final resting place for 8,302 Americans. They represent every U.S. state except Alaska, as well as the District of Columbia. Use of the 65&frac12; acres of land as a burial ground was granted by the Dutch government in perpetuity without charge or taxation.

Those buried here come from three major campaigns. Operation Market Garden was the ill-fated attempt to secure a route across the Rhine River farther to the north in the Netherlands. The advance into Germany and crossing the Roer River was another costly maneuver, as was the air war in these regions.

About 600 men and women from Operation Market Garden are buried at Margraten. It is the final resting place for Lt. Col. Robert G. Cole, a battalion commander with the 82nd Airborne Division. Killed by a sniper during the early stages of the offensive, Cole was later recognized for his heroism shortly after D-Day in Carentan, France, by being awarded the Medal of Honor.

Also interred at Margraten is Maj. Gen. Maurice Rose, who was killed as he led the 3rd Armored Division into Germany.

Not all of those buried at Margraten are of high position, or highly decorated, but they all share a common legacy of valor and sacrifice. For these reasons, they have earned the eternal gratitude of not only Americans everywhere, but also of Dutch citizens.

At the first Memorial Day service in 1945, every grave at Margraten was &ldquo;adopted&rdquo; by a local resident. Many of the graves are still adopted by the same families today, passed down from one generation to the next like a treasured heirloom. In many instances, the Dutch families have corresponded with the families of their adopted soldiers and have hosted the American families as they came to visit the grave of their loved one.

One of the first trips my wife and I took to Margraten was on a cold and rainy day. There were only a handful of visitors at the cemetery. As we walked among the graves, we met an elderly Dutch woman placing a bouquet of flowers on a grave. Since it was not a holiday and the weather was so bad, we wondered why she was at the cemetery. When we asked her, her eyes welled up and she quietly responded, &ldquo;Because we are in debt.&rdquo; She appeared to be in her mid-70s and might have had first-hand knowledge of the subjugation and hardships of the early 1940s and realized the sacrifices made on her behalf by these U.S. soldiers.

Time might heal the scars on the landscape, but it does not diminish the gratitude of those who were oppressed. Nor does time weaken the bond between the soldiers who fought here.

I have had the honor to be with two groups of veterans as they came back to visit their fallen comrades. It was touching to see humble men, who have only recently had their story of courage and honor come to light with the &ldquo;Band of Brothers&rdquo; HBO television series, kneel and weep at the graves of the men with whom they fought and endured so many hardships. Men like Don Malarkey, &ldquo;Shifty&rdquo; Powers and Earl McClung &mdash; members of the &ldquo;Band of Brothers&rdquo; who were included in the mini-series &mdash; will tell you that they are not heroes, but rather their friends at Margraten and other cemeteries are the heroes.

The rows of white crosses seem to go on forever at Margraten, but before you see the crosses, you must pass through the Court of Honor, with its reflecting pool and walls on which are engraved the names of 1,722 missing servicemen from the Army and Army Air Corps. Above the names on the north wall is carved: &ldquo;Here are recorded the names of Americans who gave their lives in the service of their country and who sleep in unknown graves.&rdquo;

Two-thirds of the names on the wall are of air crew members. A bronze rosette is by a few names, indicating that this man&rsquo;s remains have been recovered, identified and returned to his family for burial. Such is the case of Pfc. Robert Cahow, a man killed on his first day of combat in the H&uuml;rtgen Forest and whose body lay undiscovered for more than 50 years.

As time pushes World War II further into the past and the veterans and civilians who survived the war become fewer, it is places like Margraten and the other American cemeteries around the world that will ensure that the sacrifices made by these Americans will never be forgotten. These rows of silent sentinels will live on in the hearts of free people forever.

Special thanks to William Haggerty of the Netherlands American Cemetery and Memorial for his information on Margraten.

The Netherlands American Cemetery and Memorial is the only American military cemetery in the Netherlands. It is outside the town of Margraten, about five miles east of Maastricht, on N278. For more information, visit the American Battle Monuments Commission Web site, www.abmc.gov, or e-mail the cemetery staff at Netherlands @abmc.gov.

Robert Huffaker Sr., a retired Army major, lives in the Netherlands. He and his wife, Lorraine, are the weekly Volksmarch columnists for Stars and Stripes Travel.

Memorial Day ceremonies in EuropeInformation on each cemetery, including maps, is on the American Battle Monuments Commission Web site, www.abmc.gov/home.php.