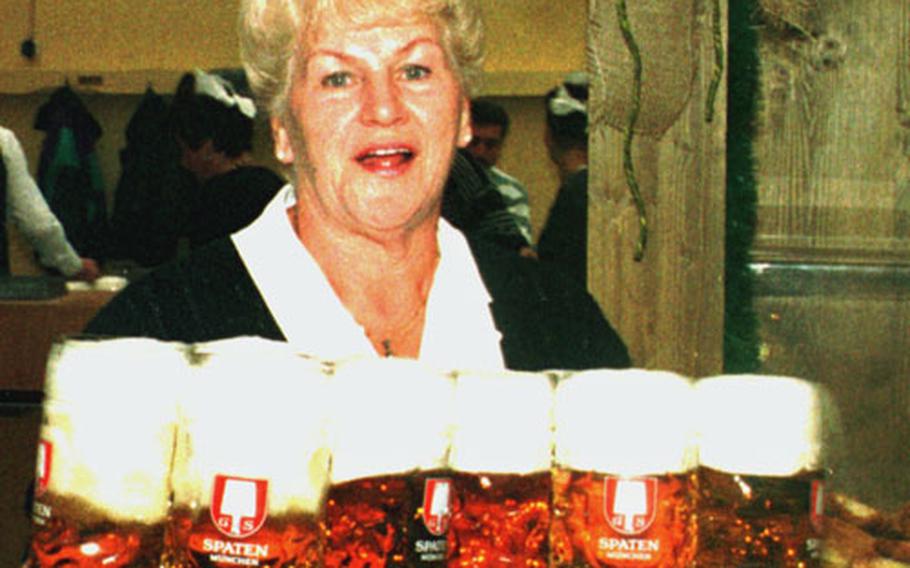 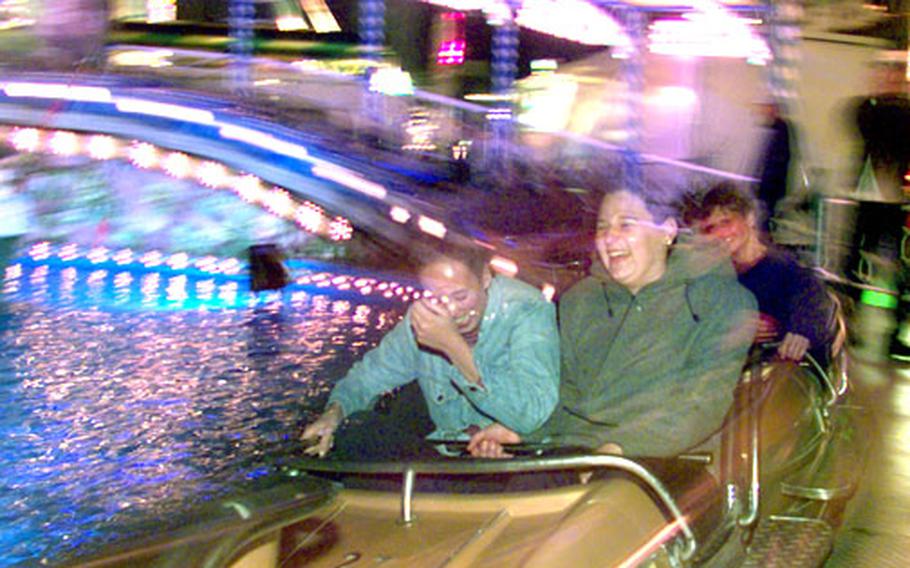 The Oktoberfest is not just about beer; there are plenty of rides for the whole family to enjoy. (Michael Abrams / S&S file photo)

But before Munich&#8217;s Lord Mayor Christian Ude can say those magic words at noon on Sept. 18, he will need a couple of well-aimed swings of a hammer to pop that first keg of beer. Once he has, it will be 16 days of partying in the Bavarian capital.

The first Oktoberfest was actually a wedding. In 1810, Crown Prince Ludwig (later King Ludwig I) of Bavaria married Princess Therese von Sachsen-Hildburghausen. The public was invited to the celebrations, which took place on a big field outside the gates of the city. In honor of the bride, the field was named the Theresienwiese.

Since then, 170 Oktoberfests have followed. Throughout the years, 24 have been canceled because of wars, and in 1854 and 1873 because of cholera epidemics.

Today the Theresienwiese, known to the locals simply as the Wies&#8217;n, is almost right downtown and roughly 6 million people make the pilgrimage to its beer tents each year.

While they are there, they will gobble up about 500,000 chickens, 190,000 pairs of pork sausage and 90 oxen roasted on spits. All of that will be washed down with various liquids, including 6 million liters of beer served in 14 beer tents. The washing down inevitably is followed by trips to the &#8220;facilities.&#8221; There are 1,440 of those; 17 reserved for the disabled.

When we say beer tents, we mean football-field-sized. Some that hold up to as many as 10,000 people.

Inside, Bavarian brass bands oompah their way through Bavarian drinking songs as friends and strangers, locals and foreigners toast each other from a big, one-liter beer mug, known as a Ma&#223;. The carousers sing along and dance on tables as the servers, with fists full of mugs and trays full of food, navigate their way through the crush.

But the bands won&#8217;t stray too far from tradition. Before taking a break, the bands will end their set with the song that every Oktoberfest visitor, whether Bavarian, American, Italian or Japanese will sing, with beer mug raised high: &#8220;Ein prosit, ein prosit der Gem&#252;tlichkeit, ein prosit &#8230;&#8221;

The Oktoberfest is not just beer, food and dancing on tables. The amusement grounds include roller coasters, merry-go-rounds and Ferris wheels, slides, swings and mazes, plus plenty of souvenir stands. And you don&#8217;t even have to drink beer. Last year more than 700,000 bottles of soft drinks were sold along with almost 190,000 cups of coffee and tea. Almost 200,000 liters of alcohol-free beer went to those who wanted the taste but not the alcohol content.

Because of its roots, the Oktoberfest is also about tradition. At 11 a.m. on the opening Saturday there is the grand entry parade of the Oktoberfest landlords and breweries. Led on horseback by a symbol of the city &#8212; the M&#252;nchner Kindl, or Munich Child &#8212; the beer tent landlords and their families in decorated carriages and dressed in traditional Bavarian dress parade along with the horse-drawn wagons of the Munich breweries onto the Wies&#8217;n grounds for the tapping of the first keg.

The next day is higlighted by the International Costume and Riflemen&#8217;s Parade. First held in 1835, this 6-kilomete- long procession snakes its way from the city center to the Oktoberfest grounds. It features groups in folklore costumes, marching bands, riflemen in historical uniforms and, again, the wagons of the Munich breweries. About 7,000 people from Germany, Austria, Italy and other European countries participate in the two-hour parade, which begins at 10 a.m. at the Siegestor.

For those who just can&#8217;t get enough of oompah bands, on Sunday, Sept. 26, at 11 a.m., there will be a concert of all the Oktoberfest bands at the foot of the giant Bavaria statue. (If it rains, it will be postponed until the following Sunday).

But you won&#8217;t have to go to parades and concerts to see dirndl and lederhosen. The Oktoberfest is a runway of Bavarian fashion. Many of the tourists get in the act, too, making it hard to tell who is a local.

A word of warning: While having fun at the Oktoberfest, take care to protect your valuables, as crowded tents and plenty of drink makes for good pickpocket opportunities.

You can save money at the Oktoberfest on the rides and at some of the vendors. This year there is a Wies&#8217;n-Card, a chip card much like a phone card, worth 30, 40 and 50 euros. When paying with one, you get a 10- percent discount on the price. Buy them at the tourist information offices at the main train station and on the Marienplatz in downtown Munich. Unfortunately, they are not good in the beer tents.

Weekends are always the most crowded at the Oktoberfest, and sometimes on Friday and Saturday nights linebacker-size bouncers will keep the multitudes out of the overflowing tents. If you can, visit the Oktoberfest during the week. It will still be crowded &#8212; especially the second week &#8212; but much more comfortable.

Until the 172nd edition of the Munich Oktoberfest rolls around, that is. Prost!

Where: The Theresienwiese in Munich, Germany.

How to get there:

By car: Munich, the capital of Bavaria, is in southeast Germany. On the autobahn, A8 from Stuttgart leads into the city, as does A9 coming from the north. From Italy via Innsbruck, go through Garmisch and take A95, or take A93 and A8 to Munich. From Italy via Salzburg take A8. Parking during the Oktoberfest is very limited &#8212; and your car will be towed if parked illegally.

By train: The Theresienwiese is within walking distance of the Munich main train station, and trains from all over Europe arrive there.

On a tour: The USO, outdoor recreation offices and many tour companies offer tours to the fest, as does the Armed Forces Recreation Center in Garmisch.

In Munich: The subway is the best way to get to the festival grounds, but it will be crowded. Lines U3, U4, U5 and U6 all stop at the Theresienwiese.

Where to stay: In theory, Munich is all booked up for the Oktoberfest. In reality, people book rooms a year in advance and then cancel. So, strange as it may seem, sometimes the later you are searching for a hotel, the luckier you get. Check the Munich Web site, or get a Munich phone book and go down the list. At the end of A8 coming from Stuttgart, there is a tourist information center that will try to help you find a room. Many people stay at AFRC and either take an AFRC tour to the fest or go by train. AFRC&#8217;s new Edelweiss Lodge and Resort opens Wednesday, Sept. 15 in Garmisch.