Luxembourg City: A town of many nationalities The ruins of a guard tower known as the "hollow tooth" in Luxembourg. (Raymond T. Conway / S&S)

The ruins of a guard tower known as the "hollow tooth" in Luxembourg. (Raymond T. Conway / S&S) 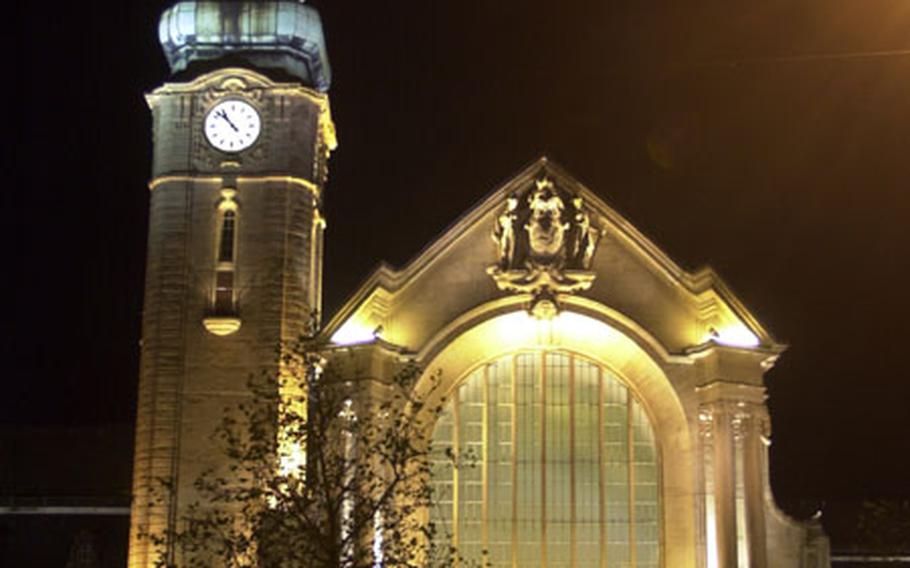 An evening view of Luxembourg&#39;s main train station in the bustling Gare section of the city. (Raymond T. Conway / S&S) Luxembourg&#39;s Cathedral of Our Lady which contains the tombs of John the Blind, King of Bohemia and Count of Luxembourg; the deceased members of the Grand Ducal family and of the bishops of Luxembourg. (Raymond T. Conway / S&S) 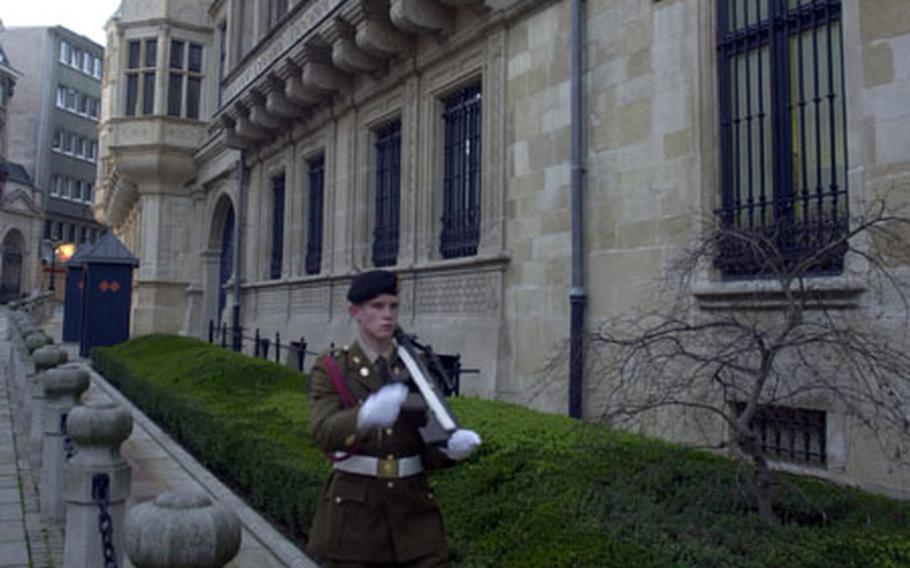 The international diversity of Luxembourg City begins the minute you raise the lid on a sugar bowl.

While sweetening your morning coffee should be simple, in Luxembourg, you are offered a choice of traditional white cubes, chunks of crumbling brown sugar, or dark crystals that look like quartz and taste like rock candy &mdash; each reflecting the tastes of different European travelers.

And so the choices begin in Luxembourg.

There are the languages: French, German and English. Then the driving options: All of the major direction signs point to cities in other countries. Most of the radio stations come from Germany or France. Likewise, most everyone speaks French and understands German. They even have their own language, which sounds like a mix of French and German, although locals insist it is unique. But, as in most cosmopolitan cities, business could always be done in English.

There&rsquo;s a lot to see, so you&rsquo;ll need to make further choices if time is limited. Fortunately, most of the sights are within walking distance of the city center. Parking lots are well marked but often full. Parking on the street is like it is in most European countries: You pay for a ticket nearby and place it on your dashboard.

A nice walk for the scenic-minded begins at the Bock promontory along Montee de Clausen. Most walking guides start tourists at the Place d&rsquo;Armes &mdash; a parade ground in the city center that dates to 1671 and is the site of the city&rsquo;s main tourist information center. But if you join them, you will bump elbows with droves of tourists along the entire route. Starting at the Bock will let you see the spots many walking tourists never make it to &mdash; and without the cluster of tour groups.

The setting of the ruins of the city watchtower, known locally as the &ldquo;hollow tooth,&rdquo; gives a good feeling for the heights the city rests upon. Peering over the sheer cliffs to the Alzette River several hundred feet below is a dizzying experience. Walking-paths snake along the river&rsquo;s murky green waters. and terraced fields stepping up the valley&rsquo;s slopes are used for gardens.

The entrance to the Bock Casements are nearby. The casemates &mdash; a multilevel labyrinth of defensive tunnels built into the rock &mdash; were started in 1644. The original 14-mile-long galleries were enlarged by the French and later Austrians who occupied the city. Today, about 10&frac12; miles survive, and have been open to the public since 1933.

Unfortunately, the underground passages, one of the biggest tourist attractions in the city, are closed during winter months, the time when we visited the city. So instead, we decided to stroll along the Corniche Promenade, dubbed the &ldquo;most beautiful balcony of Europe&rdquo; by local tourist brochures.

Following the stone parapet west toward the city, we found the Millennium Monument, commemorating Luxembourg&rsquo;s first 1,000 years from 963 to 1963. A tabletop diagram points directions of the compass with distances to major world capitals. (In case you are interested, it&rsquo;s 6,411 kilometers from Luxembourg to Washington, D.C.)

Up until this point, everything appeared to retain an old European flavor. Yet, a glance northward revealed the European Center, a modern monster peering over the hills, with its tall buildings and new construction. It served as an awkward reminder of the current world as your mind drifts into history.

The air traffic is also a constant reminder of our times. The airport is directly on the city&rsquo;s outskirts. Anyone interested in looking at commercial airplanes would like Luxembourg for the great views you get of the underbellies of jetliners on their final approaches.

One of the more interesting sections of the city is Gare, the modern part of the city to the south of the center. It has a good selection of hotels &mdash; for those who want to, or must, avoid the more expensive chains &mdash; and a lot of lively shopping strips and night spots. It is also the site of the city&rsquo;s main rail station.

Each morning, Gare is a bustling transfer station for folks running errands or on their way to work. People pour out from the main train station onto the street.

For over a century, a bronze-capped clock tower has clunked away each minute as the city residents play out their lives below. Pedestrians gaze up and then to their watches, checking the time, before boarding buses and taxis that whisk them up Avenue de la Gare into the city center.

At night, Gare becomes the seedy side of Luxembourg. The bustle turns to hustle, as both locals and tourists converge to sample food, fun and pleasures of the flesh.

Troops heading for Europe&rsquo;s top &ldquo;red light&rdquo; entertainment would probably head first to Amsterdam or Hamburg, Germany. But Luxembourg also offers several blocks of adult entertainment disguised as cabarets. Neon signs call out &ldquo;strip tease&rdquo; and &ldquo;night club&rdquo; on nearly every side street within walking distance of the train station. By the door, pinups of girls show what each club has to offer.

In Gare, strange characters may stumble past, but no one seems to beg or bother passers-by, as in other big city &ldquo;red-light&rdquo; districts.

Several hotels claiming three stars line Gare&rsquo;s narrow streets. One can only assume they were built to accommodate weary travelers from the nearby train station. But with the multitude of young women in nearby caf&eacute;s, they may have an alternate purpose.

Mixed in with the dens of hedonism are several legitimate restaurants, some with extensive menus of French, Italian and Thai food. Locals have their own pubs in Gare. While tourists may be welcome, the atmosphere of &ldquo;regular crowd&rdquo; can be imposing when you first walk through the door.

While Luxembourg locals seemed slightly cold, they were more than accommodating with simple things, such as directions to the city sights and cash transactions.

For those interested in traditional sites, most of Luxembourg&rsquo;s are in the old city center. One of the first coming from Gare is the Notre Dame Cathedral, which dates back to 1621. Inside, worshipers find solitude among the church&rsquo;s ornately carved columns and balconies. Such a massive sanctuary echoes the slightest noises, as well as groups of giggling French school girls.

Other sights in the city include: Grand Ducal Palace, a former town hall that dates all the way back to 1572; the nearby Place de la Constitution; the town hall on Place d&rsquo;Armes; and the Petrusse casements.

In the suburb of Pfanffenthal, below the Bock, are four well-preserved fortification towers, including the odd Trois Glands Fort. See it and you&rsquo;ll know how it got its name.

Just outside the city, in a suburb called Hamm, lies the American military cemetery and the grave of Gen. George S. Patton.

Tourist information centers are located at the Place d&rsquo;Armes and at the main train station in Gare.