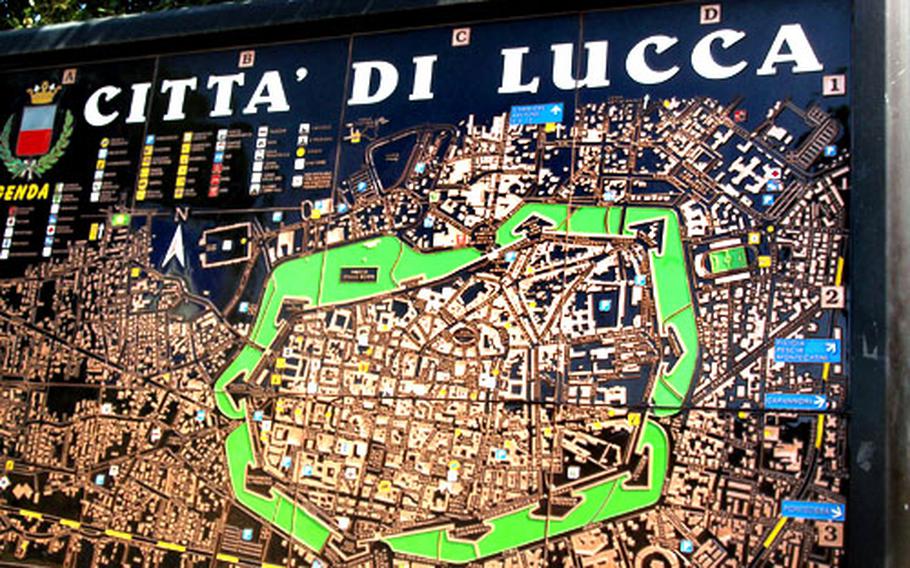 The oldest parts of the Italian city of Lucca are still encircled by 16th century walls, as shown in this map. Visitors can still walk on top of them and get a few views of the city. But there are better views from the Guinigi Tower. (Kent Harris / S&S)

The oldest parts of the Italian city of Lucca are still encircled by 16th century walls, as shown in this map. Visitors can still walk on top of them and get a few views of the city. But there are better views from the Guinigi Tower. (Kent Harris / S&S) The walled city of Lucca is only about a 20-minute drive from Pisa and less than an hour from Florence. (Kent Harris / S&S) 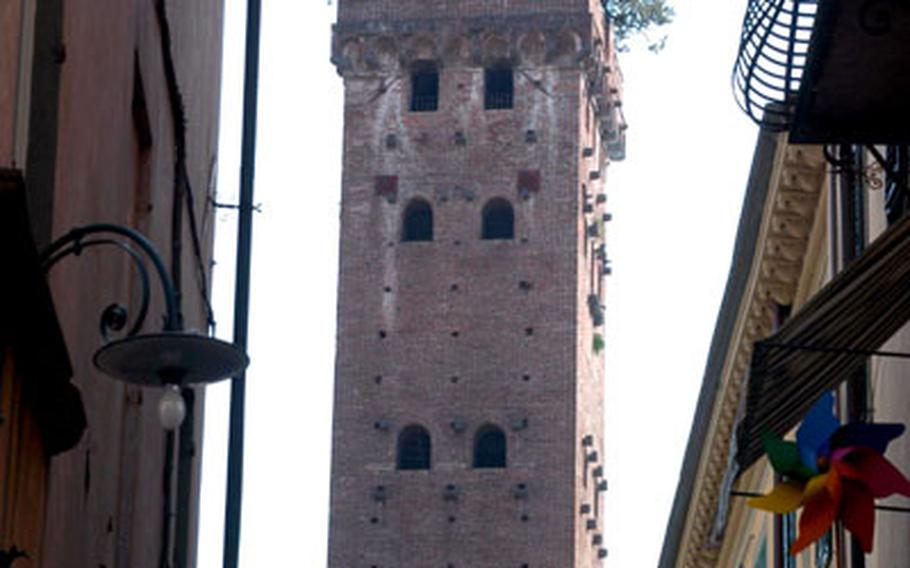 Like many cities in the Italian region of Tuscany, Lucca has a tower from which visitors can take in views of the surrounding area. But the Guinigi Tower also has trees growing on top. (Kent Harris / S&S)

Visitors often come to Tuscany to admire the lovely countryside, see the Leaning Tower of Pisa, marvel at the red roofs of Siena or catch a glimpse of the majestic &ldquo;David&rdquo; in Florence.

While Lucca doesn&rsquo;t have a singular attraction to match any of those, it does have a handful of smaller ones that can make for an interesting day trip.

The city, once given by Napoleon to his sister, sits just off the A11 autostrada that connects Pisa and Florence. Lucca warred with those two cities during part of its history.

The old part of the city, where all the sights are, is still surrounded by huge walls built in the 16th century. Visitors can stroll around the entire circuit, but the city is best seen from the top of the Torre Guinigi.

The tower, which takes more than 220 steps to climb, isn&rsquo;t as elegant as the bell tower in Pisa. And it&rsquo;s not as tall (or intimidating to climb) as its counterpart in Siena. The Guinigi Tower&rsquo;s uniqueness comes from the small grove of trees growing on top of it. Visitors who circle the top need to duck to avoid the limbs.

The former Roman amphitheater is one of the sights to behold from the tower. Stone from the walls was used to build churches and other structures, and houses were then built on the remains. That leaves a circle-like piazza surrounded by houses and restaurants today.

You can also see the Cathedral of St. Martin from the tower. Its white fa&ccedil;ade is worth a look, but the more interesting stuff is on the inside.

One piece that stands out is the Holy Face, a wooden sculpture of Jesus. The legend that accompanies it, like many surrounding holy artifacts in Europe, defies scientific evidence. In this case, it also defies common sense. But regardless of whether the piece was carried by roaming oxen to the city after floating across the Mediterranean, the church&rsquo;s gloomy interior just adds to the mystery.

The city boasts a handful of museums and art galleries. Visitors with their own transportation also can visit several villas on the outskirts of the city.

Those who come by train stop just outside the old city center and walk in, or rent a bike from the tourist office and pedal through this charming old town.

Directions: Lucca, Italy, is off autostrada A11, which connects Florence and Pisa. It&rsquo;s about 10 miles from Pisa. There are regular train connections between the two cities. Vicenza is a little more than two hours away if the traffic&rsquo;s flowing.

Costs: It costs 3.50 euros (2.50 for children) to climb the stairs of the Guinigi Tower. Admission to the cathedral is free. Tourist offices operated by Carisma, a private firm, offer audio guide rental for self-guided walking tours at 9 euros a day. You can rent bicycles from the same office for 2.50 euros an hour.

Food:Buccellato, cakes with raisins, are a local specialty. And several dishes are made with farro, a grain found most commonly on or near the mountains. Pizza and traditional Italian dishes are served all over the city.

Information: The city has five tourist offices. Carisma operates three, all inside the main gates in the walls that surround the old city. Offices are open 9 a.m. to 7 p.m. daily. The phone number is (+39) (0) 583-583150, and the Web site is www.carismalucca.it.