Lindau: Enjoy a scenic day at the lake in southern Germany 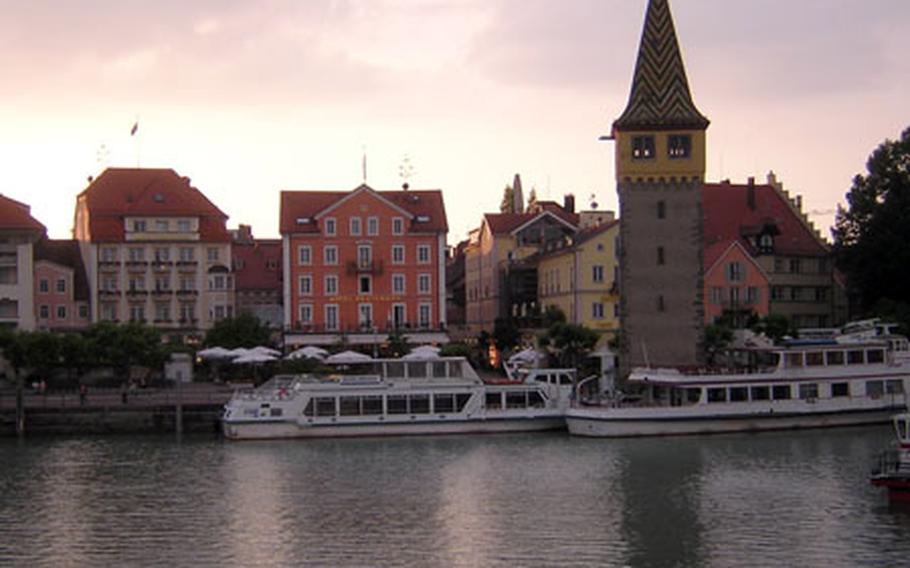 The hues of the sunset match the color of the facades of some of the hotels on the harbor front at Lindau, Germany. At right is the Mangturm, a 13th-century lighthouse and tower built to protect the harbor. (John Taylor / S&S)

The hues of the sunset match the color of the facades of some of the hotels on the harbor front at Lindau, Germany. At right is the Mangturm, a 13th-century lighthouse and tower built to protect the harbor. (John Taylor / S&S) 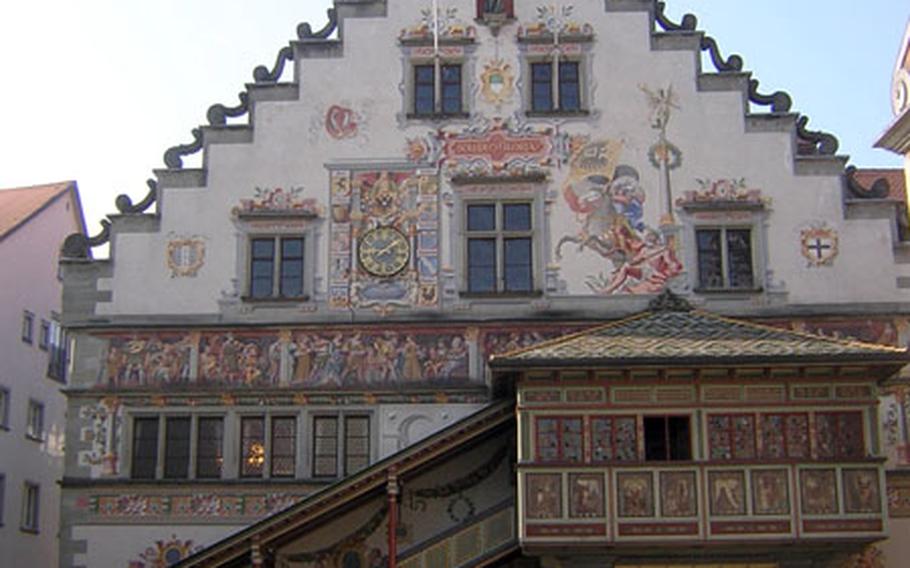 The painted front of the old town hall includes scenes from the Bible and local history. The wooden steps and porch on the front were rebuilt after a fire from the original plans. The painted clock face is to the left of the center window. (John Taylor / S&S) The old town hall is one of the first buildings visible after leaving Lindau&#39;s promenade and heading into the old town. This is the back of the building decorated with painted scenes from the Bible and local history. (John Taylor / S&S) Two of the landmarks of Lindau are the Lion of Bavaria statue and the lighthouse guarding the entrance to the harbor. The best way to get around town is by bike or on foot; most people park their cars in large lots. (John Taylor / S&S)

When the weather is good, it is hard to beat a day at the lake.

And in southern Germany, it is hard to beat Lake Constance, a large lake &mdash; called Bodensee by the Germans &mdash; that also borders Switzerland and Austria.

The lake and the areas along its banks are ideal for boating, cruising, cycling, hiking, swimming, birdwatching or just relaxing in the sun.

A wonderful base for doing any of those &mdash; especially the last one &mdash; is the town of Lindau. Or more specifically, the island of Lindau.

Insel Lindau, set in the lake, is connected to the rest of the town by a two-lane causeway and a rail line. It includes the old town, a harbor lined with hotels and restaurants and docks for large boats that carry visitors around the lake, making stops in three countries.

Lindau, whose name is said to have been taken from a convent called Our Lady Under the Limes (Unter den Linden) some time before the end of the ninth century, began as a fishing village and grew into a shipping and trade center. It fell under the rule of Austrians, French and others, adding a bit of the culture and architecture of each as it evolved into a popular resort. Many of its changes during the past 150 years or so can be seen in a display of photographs and drawings along the harbor front.

Our favorite was a German gent with long white hair and a crowd-pleasing patter who played Dixieland jazz on a battered piano he had rolled to a busy spot in front of a hotel.

At a bend in the promenade is a lighthouse and tower called the Mangturm, built in the 13th century to protect the harbor. Beyond it is a walk that leads past an enclosed swimming area and a sailing school to a seawall with two of the town&rsquo;s landmarks: a 100-foot lighthouse and a large monument called the Lion of Bavaria. From the base of the monument, completed in 1856, and all along the breakwater there are views of the lake and surrounding mountains on one side and the harbor front on the other.

If you leave the promenade and head into the old town, one of the first buildings you will see is the old town hall, built in the 15th century and modified to its present look about 100 years later. The building&rsquo;s exterior, both front and back, is painted with scenes from the Bible and local history, so be sure to see both sides. Don&rsquo;t miss the porch on the front, rebuilt to original plans after a fire, and the decorated clock.

Running past the front of the town hall is Maximilianstrasse, a pedestrian shopping street fed by many small alleys with their own cafes, bars, shops and gardens. Farther along the street is the town&rsquo;s other main square, the Marktplatz, with two churches and the Haus zum Cavazzen.

The 18th century mansion, once considered the most beautiful residence on Lake Constance, has been the town museum since 1929 and has a large collection that includes furniture, glassware, historical toys, paintings and mechanical musical instruments.

Although we did not go in, this might be just the place to head if the weather turns bad.

Directions: From Stuttgart and north, take Autobahn 7 to the junction with A96 and follow it south toward Lake Constance. Exit onto B12 and follow signs to Insel Lindau. You can park for free before crossing the causeway and walk across, or park in one of the lots on the island. The island is best seen on foot or by bike, and parking outside designated lots is limited. There are also regular rail connections from Karlsruhe, Ulm and Munich to the Lindau station, which is next to the harbor.

Times: Any time the weather is good is a good time to go, but keep in mind that others know this, too, and weekend afternoons during the spring and summer can get crowded. The town holds several special events during the year, including a town festival this weekend, two traditional fests later in the month, a fair in November and a Christmas market in December. The museum is open April 1 to Oct. 31, 11 a.m. to 5 p.m. Sundays and Tuesday through Friday, plus 2-5 p.m. Saturdays.

Costs: Parking in lots is paid by the hour, with a 5-euro maximum for all day. There is also metered parking around town for limited time. Admission to the town museum is 2.50 euros for adults and 1.50 for children.

Food: There are many places to eat along the harbor, on Maximilianstrasse, at the Marktplatz and the streets connecting them. Fish is popular, especially whitefish (Felchen filets) served with a salad, and pike, trout, char and eel. So is ice cream.

Information: The town&rsquo;s Web site, www.lindau.de, has an English-language option. The tourist information office is on Bahn-hofplatz, across from the train station.