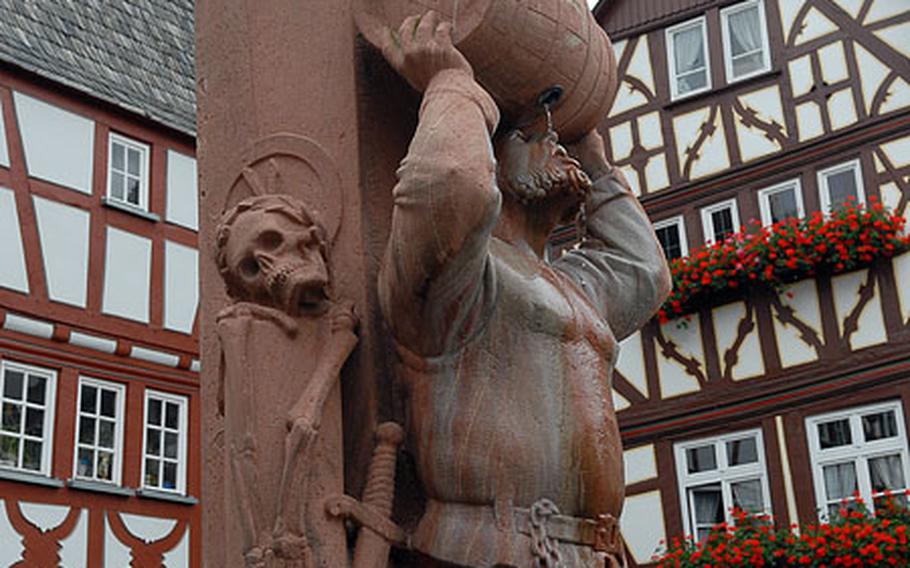 This 1985 statue of wine-drinking, knight-turned- city manager Friedrich von Hattstein is part of a fountain in a Limburg square. In the background are two of the town&#39;s many half-timbered houses. (Michael Abrams / S&S)

This 1985 statue of wine-drinking, knight-turned- city manager Friedrich von Hattstein is part of a fountain in a Limburg square. In the background are two of the town&#39;s many half-timbered houses. (Michael Abrams / S&S) 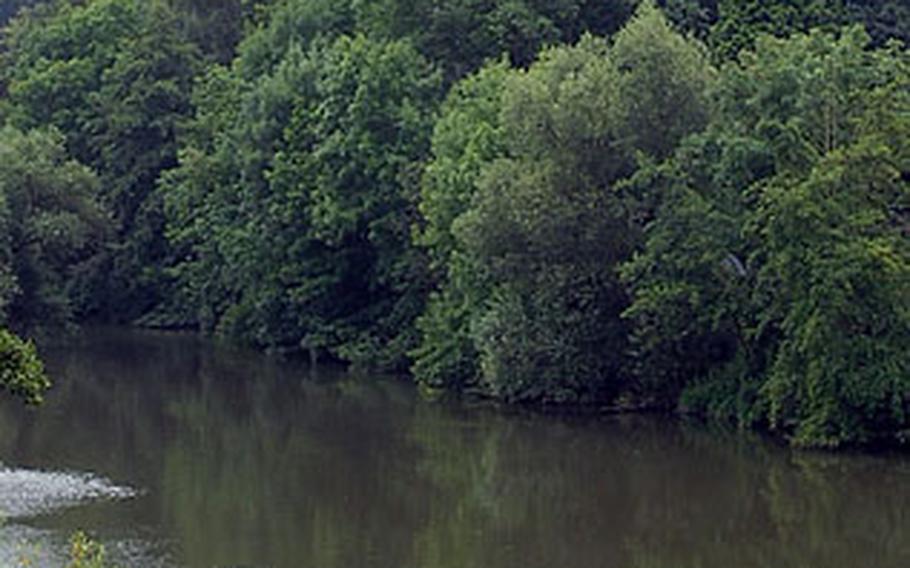 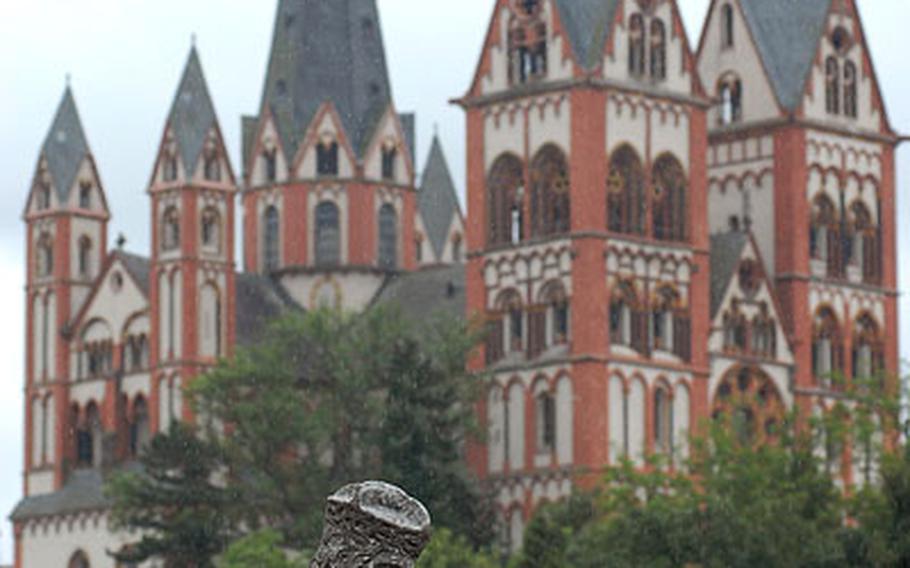 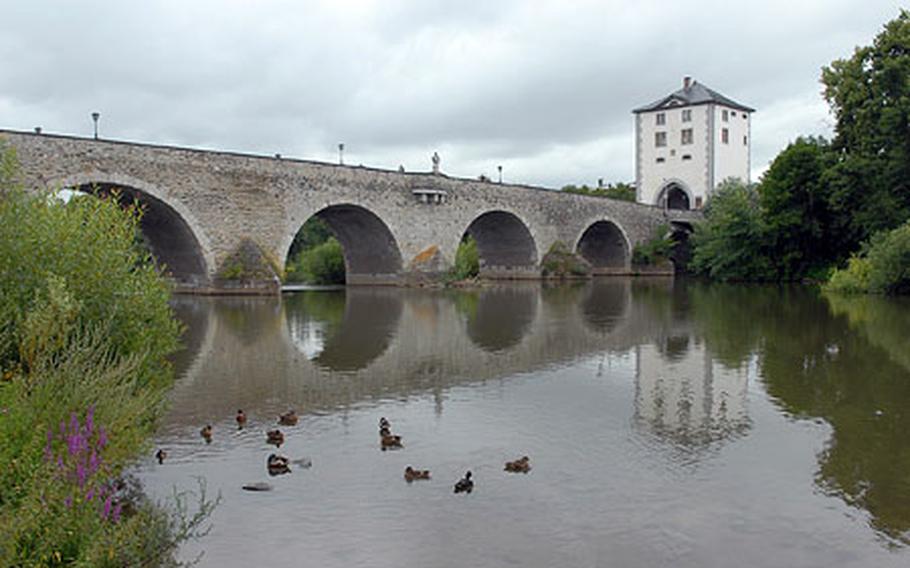 The Alte Lahnbrücke, or Old Lahn Bridge, is built of stone and dates to the 14th century. Partly destroyed in World War II, it was rebuilt in 1946-47. (Michael Abrams / S&S)

The cobblestone streets and squares of Limburg, Germany, are lined with cafes, restaurants and ice-cream parlors. So many in fact, that one could believe that this town on the Lahn River might have as many eating places per capita as Paris or Vienna, Austria.

This is probably an exaggeration, but after wandering the lanes, and seeing the sights, one is sure of finding a place to rest the feet and have a drink.

The main attraction of this more than 1,000-year-old town is its cathedral. Rising from a bluff overlooking the river, the late-Romanesque, early-Gothic edifice is not quite like most cathedrals.

Built in the 13th century, it has seven towers and is painted white and red with trimming around the doors and windows. Seen from afar, it almost looks as much like a fortress as it does a church.

Inside, it looks more elegant than it does from the outside, with galleries on three floors rising to the roof. Among its features are the 18th-century, life-size Madonna, the late-Romanesque baptismal font and the 13th-century tomb of the founder of the collegiate chapter, Konrad Kurzbold, which rests on six statues that predate the cathedral.

Across from the cathedral is the Diocesan Museum and Cathedral Treasure, with its collection of religious art, and the treasures of the cathedral, including the &ldquo;Staurothek,&rdquo; a Byzantine cross reliquary.

Behind the cathedral is the palace, parts of which date to the 13th century.

Next to the palace, a street &mdash; M&uuml;hlberg &mdash; winds down to the Lahn. When you reach the river, a right turn will take you to where the river cruise boats dock, while a left will take you down a path along the Lahn.

Follow the path until it returns to the city at the foot of the old stone Lahn Bridge. Built in the 14th century, the bridge survived pretty much intact until World War II. Rebuilt after the war, it offers one of the best views of the cathedral towering over the river and town.

Wander back through Limburg&rsquo;s narrow lanes and many squares to see the old, half-timbered houses. Some, like Haus Trombetta on Frankfurterstrasse, or the 13th- century Gothic house at R&ouml;mer 2-6, are quite impressive.

Others, such as the one at Br&uuml;ckengasse 9, have a different claim to fame. Known as the house of the seven vices, seven carved wooden heads adorn the house, one for each of the cardinal sins: pride, greed, envy, lust, wrath, sloth and gluttony.

After the walking and the sightseeing, the last two might not seem like vices when you sit down at the cafe or restaurant of your choice to cap off your visit.

Directions: Limburg is just off Autobahn 3, about 30 miles north of Wiesbaden. Local trains and buses stop at the main train station, while the ICE high-speed train between Frankfurt and Cologne stops at the ICE Bahnhof on the outskirts of town. A bus connects to downtown.

Costs: Admission to the Diocesan Museum is 2 euros for adults and 1 euro for children. Entrance to the cathedral is free, but donations are welcome.

Food: There are plenty of restaurants and cafes in all price classes and more than a handful of ice cream parlors. For dining on the river, try the Wirtshaus Oberm&uuml;hle, a restaurant housed in a former mill.