Lhasa: It’ll take your breath away Buy Photo
A kindly Tibetan woman selling souvenirs outside our hotel poses with the youngest Jorgenson. (Sue Jorgenson / Special to Stars and Stripes)

Buy Photo
A kindly Tibetan woman selling souvenirs outside our hotel poses with the youngest Jorgenson. (Sue Jorgenson / Special to Stars and Stripes) 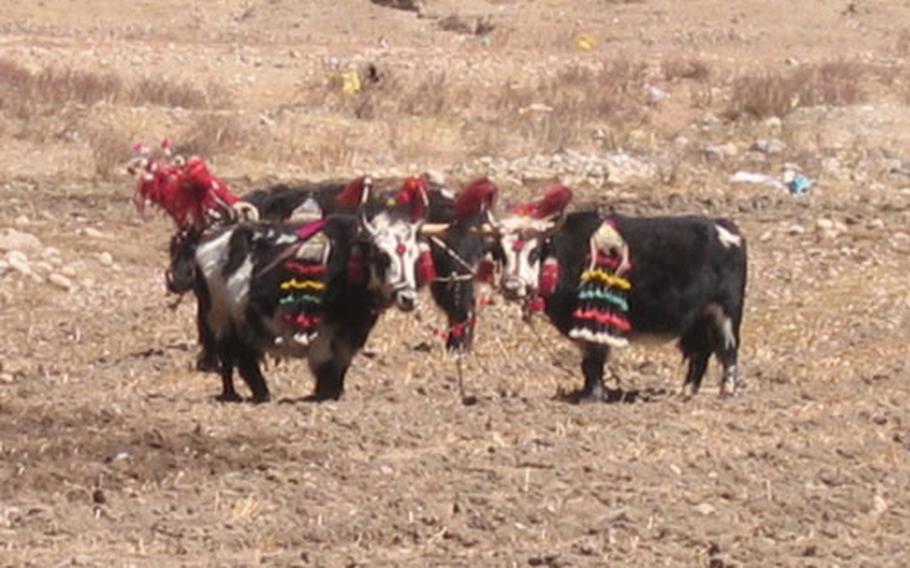 Buy Photo
“Yak Central” in the middle of a roundabout in Lhasa. (Sue Jorgenson / Special to Stars and Stripes) Buy Photo
The Tibetan family the Jorgensons visited poses for a photo in the courtyard of their home. (Sue Jorgenson / Special to Stars and Stripes) 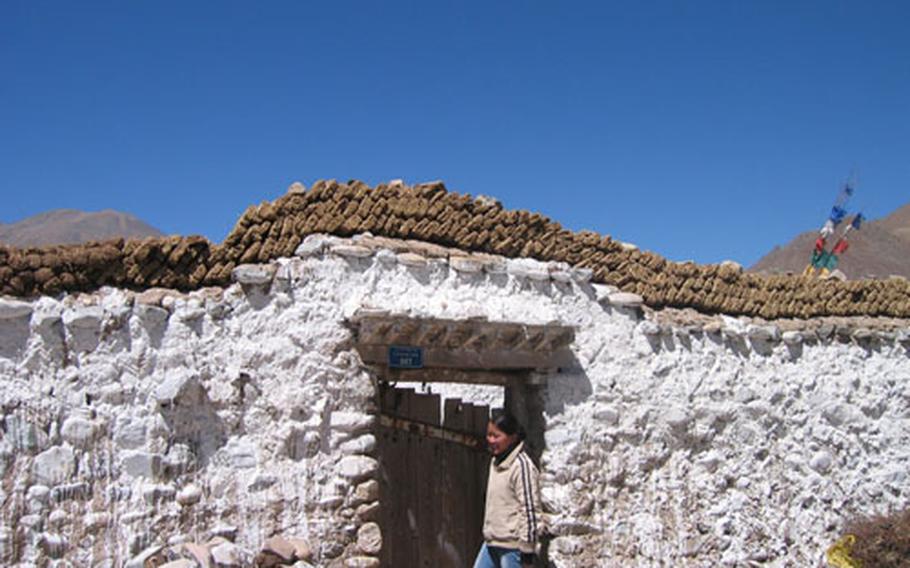 Buy Photo
The Jorgenson tour guide, Yangqing, looks for someone at home. Animal dung cakes on the upper walls are drying in the sun and will be burned for heat. (Sue Jorgenson / Special to Stars and Stripes)

Tibet has always been tops on my list of interesting places to visit. If it&#8217;s on yours, move it up to the top ten places to go while you&#8217;re still young.

Lhasa is Tibet&#8217;s capital and at 12,336 feet is one of the highest cities in the world, surrounded by the Himalaya Mountains. We got there via China Air, three hours away from Xi&#8217;an.

The quick ascent to so high an altitude posed some health challenges to my nearly 50-year-old lungs. Our tour guide, Yangqing, said altitude sickness is common among Tibet&#8217;s &#8220;older&#8221; female visitors. Its symptoms can be flu-like, headaches and/or shortness of breath. I had all three for all five days we were there.

But what really took my breath away was the view from our car window on the way to Lhasa from the airport 56 miles away. The forest green Lhasa River winding through the barren Himalayas seemed so serene and solemn, almost sacred. We stopped briefly when a herd of sheep crossed the road, followed by an old Tibetan woman in traditional woolen dress with a walking stick and toothless smile. We felt we&#8217;d stepped into the pages of National Geographic magazine.

Lhasa was the former home of the 14th Dalai Lama, the religious and political leader who left Tibet in 1954, three years after the Chinese government&#8217;s &#8220;peaceful liberation&#8221; brought Tibet back under its control. Tibetans still honor him as their leader, evidenced by the many religious followers who circle the Dalai Lama&#8217;s former palace spinning prayer wheels and prostrating themselves on the sidewalk.

Potala Palace, the Dalai Lama&#8217;s former home, is perched high on a mountain overlooking the city. It is Lhasa&#8217;s main tourist attraction. Several stories high, it was a long climb for short-winded, light-headed me who couldn&#8217;t have done it without my husband towing me along. Our 11-year- old son bounded ahead like a mountain goat.

I didn&#8217;t see much of the inside of the palace, choosing to recline in a visitor resting area (probably for older women), rather than trek around its many corridors. But the view from the top of the palace was quite beautiful, overlooking Lhasa and the surrounding Himalayas. We asked Yangqing about the Dalai Lama in an effort to learn more about the exiled leader, his possible return, his successor and such. She said the government did not want her talking about the Dalai Lama too much. And that was that.

Our next stop was Sera Monastery to see Buddhist monks studying for their exams. What we witnessed was surprisingly comical &#8212; a cobblestone courtyard full of men with shaved heads in orange robes sitting, standing, clapping, laughing and chattering. It was their afternoon debate, and they seemed to enjoy jostling with comrades over the finer points of Buddhist scripture. Townspeople and camera- clicking tourists looked on smiling and commenting. It was quite the spectacle.

Jokhang Temple was another tour highlight, not because we find Buddhist temples fascinating, but more so the devotion of its followers. Men and women of all ages, children and mothers with babies strapped on their backs lined the dark frigid hallways that wound in and out of side chapels. The queue ended at the main chapel housing Sakyamuni Buddha, an imposing golden figure set high on the altar.

We skirted the line behind our tour guide as curious eyes peered out of the darkness following our passage. A Buddhist nun tried to usher us in to pay homage, but at the last minute we took an escape route offered by a uniformed guard who removed a table barricade for us to pass. Once outside in the open courtyard and warmth of the sun, even I could breathe a little easier, though it was still a task even after three days of acclimating.

A quick walk through Barkhor Street in front of the temple confirmed that tourism is a substantial industry for Lhasa. Souvenirs, mostly imported from China, duplicated themselves from vendor to vendor in the large outdoor market. I didn&#8217;t see anything I couldn&#8217;t live without, but our son enjoyed bargaining for Tibetan coins for his collection. At 20 yuan (about $2.50) a piece, the half-dollar size &#8220;silver&#8221; coins were quite the buy, down from the asking price of 120 yuan (about $15).

In and around Lhasa we saw a lot of fenced compounds holding modern four- and five-story office and dormitory-like buildings. Guards standing at attention near the entrance and military vehicles on site indicated they were the property of the Chinese army. Yangqing quoted Lhasa&#8217;s population around 140,000 &#8212; 90 percent Tibetan, 10 percent Chinese and other minorities. It seemed to me that a large portion wore military uniforms.

Having bought our tour through an agency in China, most of our included meals were Chinese &#8212; five courses of vegetables, mystery meat, soup and rice. The last night we enjoyed a traditional Tibetan dinner. We actually liked the yak meat and zanba &#8212; a slightly sweet barley brownie which is their staple. I found the butter tea, which contained warm yak milk, undrinkable. But my husband thought their local beer was thoroughly drinkable. For dessert, fresh yogurt combined with a dish of sweetened rice and walnut was deliciously different.

A word about our hotel is necessary. There is only one four-star hotel in Lhasa and we stayed in it. Now granted tourist season doesn&#8217;t get into full swing until summer, but April seems a reasonable month to have certain amenities available &#8212; such as central heat. Forty-degree temperatures in the hallways and restaurant may be spring weather for some, but I&#8217;m not accustomed to wearing four layers of clothing and a coat indoors.

My nightly ritual became huddling on the floor near the plug-in heater in our room before jumping under several layers of woolen blankets in bed. An oxygen bottle attached to a hose in our night stand had been put to good use by others so I opted for disposable cans of oxygen from the hotel gift shop. At 35 yuan (about $4.35), they were well worth it. Somehow everything just seems better with oxygen.

The hotel staff was pleasant and responsive to our request for a replacement heater when the first quit working. Room service, soft sheets, extra blankets, adequate towels and hot water (after 7:30 p.m.) were provided. And though mostly in Chinese, there were more channels on our TV than what we get at home, even CNN.

The day before our departure, we visited a Tibetan family who lived in a typical clay house outside of town on a plateau of barley fields. Yangqing didn&#8217;t arrange the visit in advance, so we waited with our driver alongside the highway while she knocked on doors until she found someone at home.

The home we visited belonged to a middle-aged woman, her husband, two young adult daughters, a teenage son and toddler. We learned from Yangqing that the woman had a second husband who lived as a nomad following his herd. Apparently, women with more than one husband are not uncommon in Tibet.

The outer walls of the house were lined with flattened grassy pancakes of animal dung drying in the sun, fodder for heat. The entryway opened into a roofless courtyard. A TV sat on a shelf under an overhang, a storage pile of dung cakes against another wall, and sitting areas alongside the other two walls. There were two rooms, one for sleeping and the other for eating. We didn&#8217;t see any evidence of a restroom or plumbing, but we didn&#8217;t think to ask either.

We stayed just long enough to take photos of the family which they wanted copies of, so we agreed to send some through the mail to our tour guide.

It touched me that this family so graciously welcomed us into their home. We were truly unexpected guests and strangers, yet they were neither shy nor reactive toward us. It was, in fact, similar to the hospitality we felt from other Tibetans who appeared glad to share their homeland with foreign tourists.

The Tibetan people have a spiritual glow about them. I felt it in their smiles and could see it in their eyes. Though their standard of living, harsh environs and lack of modern conveniences might be considered a plight by some, they seemed to look upon life as a blessing.

Yangqing said most Tibetans strive to be kind and peaceful in this lifetime, believing their next life would be better. Their reason for living was in fact a way of life.

When it came time to leave Lhasa, I couldn&#8217;t have been happier knowing I was headed for the lower plains of China and more oxygen. And though it had been hard on my body, our trip was good for other reasons.

I think that any person, place or event that broadens your perspective and opens your heart can only be good. And, as I&#8217;ve often said to my son, that which doesn&#8217;t kill you will only make you stronger. Tibet had been that and more.

Zama ITT offers a &#8220;Spectacular Tibet Tour&#8221; on a go-when-you-want basis. It is a nine-day tour that includes Shanghai, China and three cities in Tibet. The schedule is similar to the following:

Day 1: Fly to Shanghai. Upon arrival, your tour guide will meet and transfer you to your hotel. In the afternoon, visit the Bund, Shanghai Museum and Nanking Road.

Day 2: Fly from Shanghai to Lhasa, changing planes in Chengdu. Your tour guide will greet you at the airport and take you to your hotel. (B/D)

Day 5: Morning tour of Kumbum and Baikhor Chode. Depart in the afternoon to Shiagtse and a visit to Tahsilunpo Monastery. (B/L/D)

Day 7: Morning tour of Norbulingka and Drepang Monastery. Afternoon transfer to the airport to board your flight to Shanghai via Chengdu. (B/L)

Day 9: Transfer to Shanghai airport for your return flight home. (B)