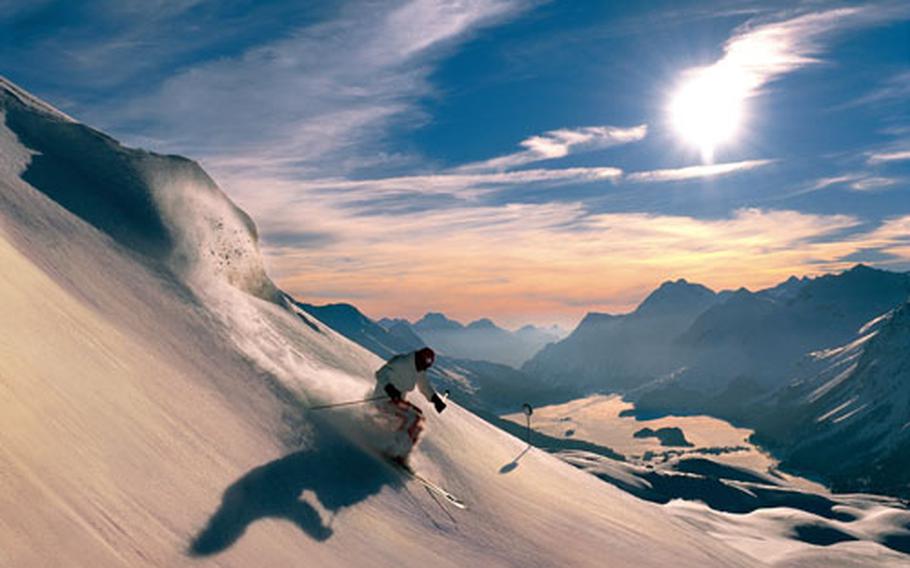 A skier&#39;s dream: Dramatic landscapes and fresh powder, such as this skier is enjoying in the Corvatsch area of Switzerland. (Courtesy of swiss-image.ch)

Or at least that is what skiers and snowboarders are hoping &#8212; especially after last season, when many of Europe&#8217;s resorts at lower elevations reported spring flowers where there are normally snowdrifts.

This week, Travel helps kick off the winter season with tips for those who like to play in the snow.

The Edelweiss Lodge and Resort, the Armed Forces Recreation Center complex in Garmisch, Germany, is getting ready for the season with the year-old Hausbergbahn, a lift that gives better access to the slopes, and its popular ski and snowboard classes. It is also reporting early snow on the nearby Zugspitze, Germany&#8217;s highest peak.

That is not necessarily a sign that there will be plenty of snow, according to a professional climatologist. He shares his opinion about why it is too early to make predictions.

If this is another warm winter, the best advice is to head higher into the mountains to where there is a good snow base. Read about three options near one another in Austria and northern Italy.

For those looking for a thrill, there is the glacier descent at Chamonix, France &#8212; led by a professional guide &#8212; or the chance to ski in St. Moritz, Switzerland. Learn how to get the most out this resort, which is not just for jet-setters.

There are other reliable sources of information for skiing in Europe. Ski clubs and Outdoor Recreation offices at U.S. military bases keep up with the best places to go, operate ski trips, offer help with selecting equipment and discuss anything else a skier or snowboarder needs to know. Find a list of contacts and trips planned for the season in the debut of our &#8220;Ski Clubs and Events&#8221; calendar, which will run throughout the winter.

So, join a club or try a new resort &#8230; and get the most out of a fresh season of skiing and snowboarding in Europe.