Learn all about chocolate at Cadbury World 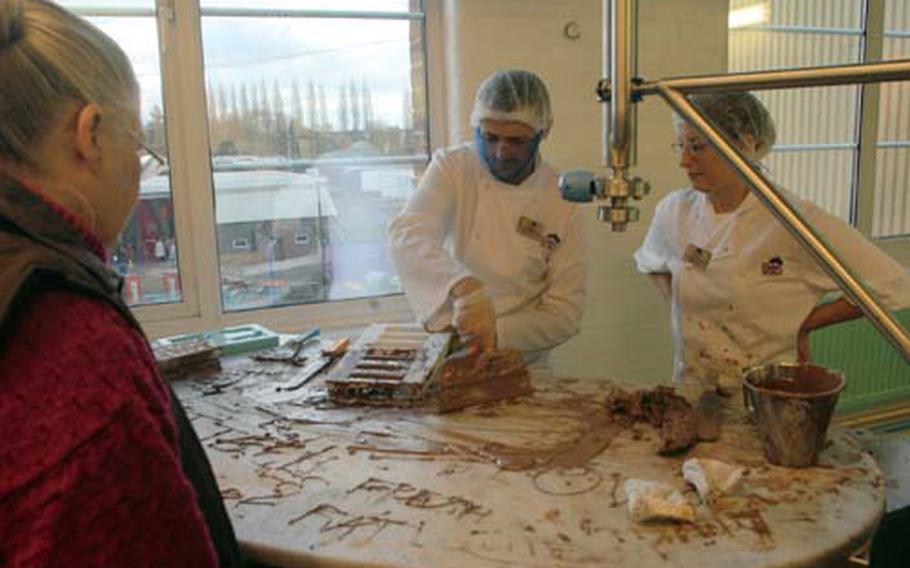 Chocolatiers at Cadbury World demonstrate traditional methods of chocolate making during a tour at the factory. (David Hodge/Stars and Stripes)

You can&#8217;t go wrong with chocolate. At least John Cadbury didn&#8217;t in 1824 when he opened his first store in Birmingham, England, offering a selection of tea, coffee and drinking chocolate.

Cadbury brand chocolate soon evolved into a large family-owned business and grew into one of England&#8217;s most popular brands of chocolate. And the rest, as they say, is well-known history.

Or is it? Sure, you have probably tried some of its chocolate-coated confections &#8212; after all, Cadbury does make about 33 percent of all chocolate eaten in the United Kingdom &#8212; but do you know the story of the company and its boatload of chocolate products?

You can learn all about them by taking the family to Cadbury World near Birmingham to see chocolate as you have never seen it before. Absorb the history of Cadbury chocolate through a self-guided tour. You can interact with exhibits and informational videos in 14 sections within the center.

During the approximately three-hour tour, you will learn about the origins of chocolate in the Aztec empire of Mesoamerica and its voyage across the Atlantic Ocean to Europe. You will hear the story of how John Cadbury and his sons, and their sons, launched the company and then turned it into a worldwide organization as they fine-tuned the taste of one of the world&#8217;s favorite snacks. You will walk through the manufacturing portion to see firsthand the production and packaging of Cadbury chocolate, as chocolatiers demonstrate traditional chocolate-making skills with liquid chocolate.

But the tour is not all look and learn: Participants get to try some of Cadbury&#8217;s staple chocolates, such as a Curly Wurly and Cadbury Dairy Milk.

With insightful uses of holographic and four-dimensional aids, Cadbury World offers a unique view of the many aspects of the Cadbury business and development of different chocolate products. The Dairy Milk brand of chocolate bars is the company&#8217;s best-selling product with about 250 million bars sold in 33 countries each year. You can also take a stroll down a life-size re-creation of the street where Cadbury opened his first store.

There is plenty for children to see and do. An area called the advertising zone hosts life-size characters from Cadbury commercials. The Purple Planet area includes a large mirrored room with projected chocolate pieces appearing on the floor. Jump up and down on the virtual pieces of chocolate and they break into pieces.

Other amenities for kids are the Cadabra ride in which visitors board Beanmobiles for a trip through a chocolate wonderland past various advertising characters, and opportunities to mold a self-portrait in chocolate and to write their name with liquid chocolate. As Cadbury World&#8217;s advertising says, this is one tour in which kids can get their hands dirty, and then lick them clean.

DIRECTIONS: From RAF Mildenhall and RAF Lakenheath take A14 westward to M6. After about 19 miles take the M42 south and follow it around the outskirts of Birmingham. Take the A441 into Birmingham and follow the brown signs for Cadbury World. It is on Linden Road in Bournville, about four miles south of Birmingham. Parking is free.

HOURS: Opening hours depend on day and time of year, but basic hours are between 10 a.m. and 3 p.m., especially during the winter. It is closed for much of January. See the center&#8217;s Web site for exact hours.

COSTS: Admission is not too pricey considering the free chocolate handed out along the way: 13.75 pounds for adults, 10 pounds for ages 4 to 15, free for younger than 4. Discounts for senior citizens and students, family tickets, group rates and year passes are also available. Reservations are advised by calling 0845-450-3599 because only a limited number of people are allowed in the center.

FOOD: The Cadbury Cafe offers a range of meals, snacks and refreshments. It is open daily, times varying with opening hours, but hot meals are always available 11 a.m. to 3 p.m. There is also a kiosk in the play area that sells snacks.

INFO: The center has two shops, including the World&#8217;s Biggest Cadbury Shop, for supplies, souvenirs and sweets. Its Web site iswww.cadburyworld.co.uk.