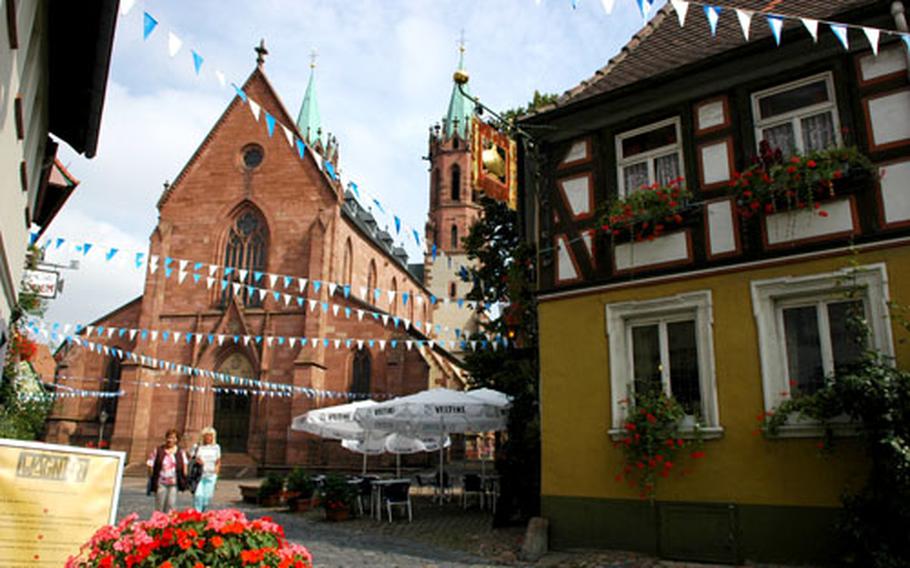 This is Ladenburg: cobbled streets, old buildings and cafes. The restaurant at right pays homage to the onion. (Anita Powell / S&S)

This is Ladenburg: cobbled streets, old buildings and cafes. The restaurant at right pays homage to the onion. (Anita Powell / S&S) 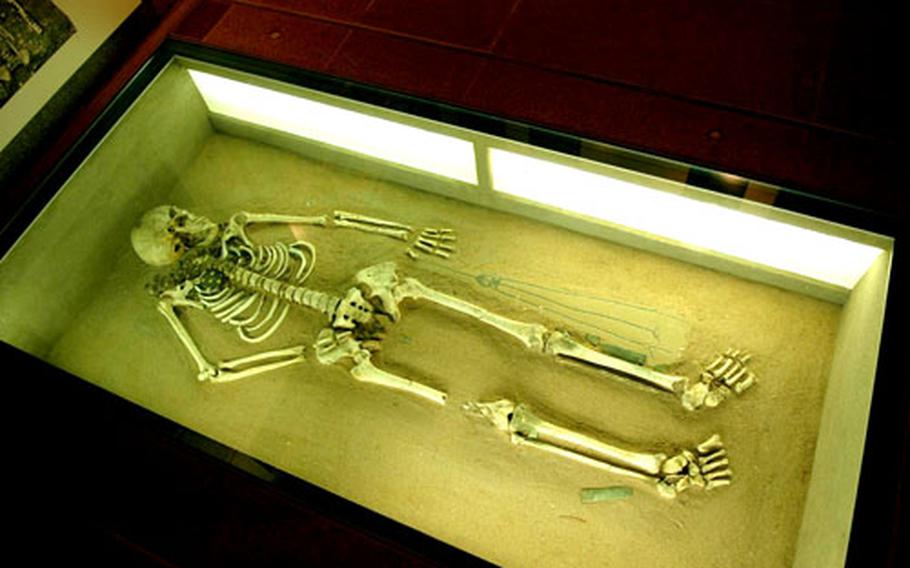 One of Ladenburg’s oldest residents — more than 10,000 years and counting — rests in peace at the city’s archaeological museum. (Anita Powell / S&S) 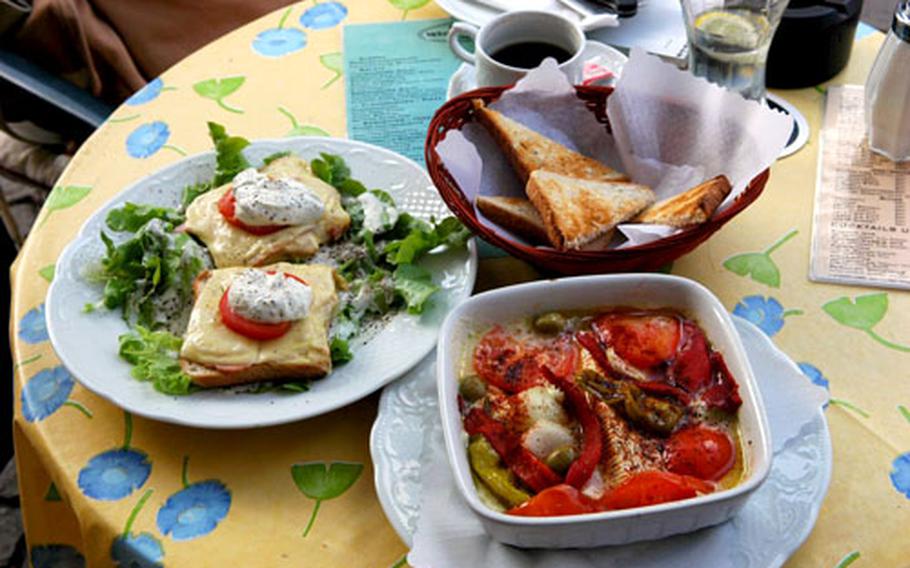 Toast the town with Toast Ladenburg, left, slices of toast with ham, cheese and tomato. Or enjoy a quick snack and coffee at a plaza cafe. (Anita Powell / S&S) 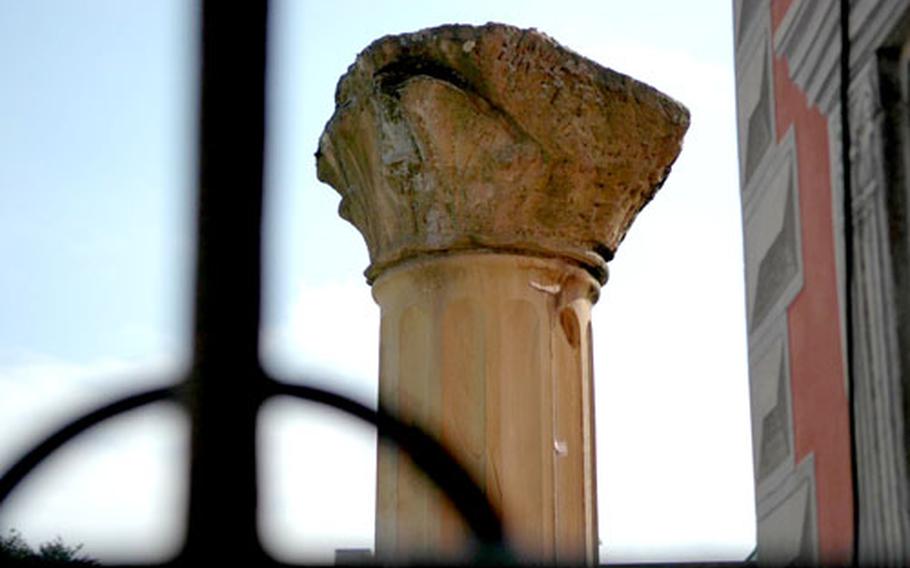 The village of Ladenburg, just north of Heidelberg, has the allure of many charming towns in Germany&rsquo;s Neckar Valley.

But it has something more: a major historical find that U.S. soldiers helped uncover.

A stroll through the town&rsquo;s maze of cobblestone streets brings tourists face to face with crumbling Roman walls, an ancient standing column and an excavation that continues to yield items from long ago.

While the town&rsquo;s known history dates to the first century, the unearthing of its past goes back only about 50 years.

However, during this post-World War II time, Germans were not allowed to use aircraft for any reason.

Heukemes drafted a request for help from the U.S. Army, specifically from troops stationed in Heidelberg. In a letter sent to Washington, D.C., he said he strongly believed there were ancient wonders to be found in the fields of Ladenburg if he could only get an aircraft to see them. He proposed his idea as an international scientific project.

The proposal was accepted, and from 1952 to 1958, Army officers and soldiers helped unearth the remains of a Roman society that had long been forgotten.

&ldquo;I am so thankful to the American soldiers for the help they offered to bring Ladenburg&rsquo;s history to light,&rdquo; said Heukemes, now 81.

He spoke as he walked through the halls of the Lobdengau museum earlier this month, looking at the treasures he and his teams found nearby.

Heukemes said that after archaeologists found the Roman relics, they continued their careful excavations. They eventually found artifacts dating to the early Stone Age.

The Lobdengau museum, located inside Ladenburg&rsquo;s ancient city walls and next to fenced-off outdoor Roman ruins, has cultural finds from throughout the area going back two millenniums.

Not all its treasures are in the museum &mdash; which occupies a former bishops&rsquo; palace dating to the 11th century. A stroll through the well-preserved old town takes visitors out of the Roman ages and into medieval times.

Half-timbered houses beneath two towering church spires inspire thoughts of how locals must have lived in the little city on the Neckar River many years ago.

Nowadays, when the weather is right, the outdoor cafes on the small squares and streets throughout the town are filled with people. Those who hope to soak up the sun can head to a large park along the Neckar.

And during cooler temperatures, the city throws open the doors of its restaurants and historical buildings and gives a warm welcome to visitors who come to see its past and enjoy its present.

On the QTDIRECTIONS: Ladenburg is just off Autobahn 5 north of Heidelberg. Exit and take Route 536 for a short distance, then make the first left and follow it into town.

TIMES: The Lobdengau museum is open 11 a.m. to 5 p.m. daily. The city has typical shopping hours, with stores closing around 5 or 6 p.m. Restaurants are open much later, until midnight or 1 a.m.

COSTS: Museum prices are 2.50 euros for adults, and 1.50 for U.S. troops and students. Children younger than 6 get in free. Family cards cost 5 euros.

FOOD: The potato and onion are major ingredients in Ladenburg cooking, with each showcased in its own restaurant. Die Kartoffel restaurant, just outside the old city walls on Kirschenstrasse 3, serves up velvety potatoes with one of its popular main dishes, an Argentine beef steak. Die Zwiwwel hotel and restaurant up the road on Kirschenstrasse 24 serves up sweet, crisp onions in typical German dishes.

INFORMATION: The city is liveliest on market days &mdash; Tuesday mornings and all day Friday &mdash; or during festivals. For more information, call the tourist office (06203- 922603) or check the Web site, www.ladenburg.de.