Kelheim: Round out German day trip with visit to monument 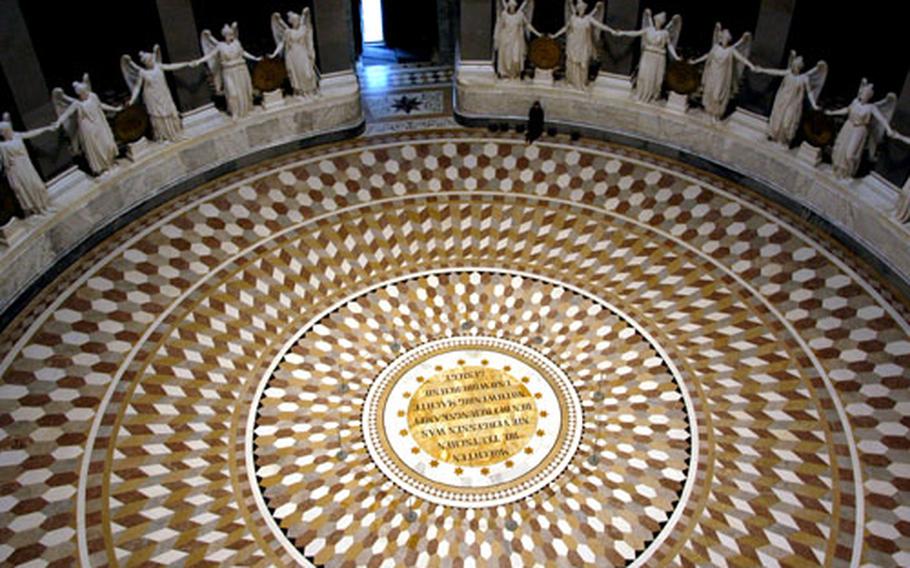 The view from the upper galleria shows the the decorative marble floor of the Befreiungshalle, or Liberation Hall. (Peter Jaeger / S&S)

The view from the upper galleria shows the the decorative marble floor of the Befreiungshalle, or Liberation Hall. (Peter Jaeger / S&S) 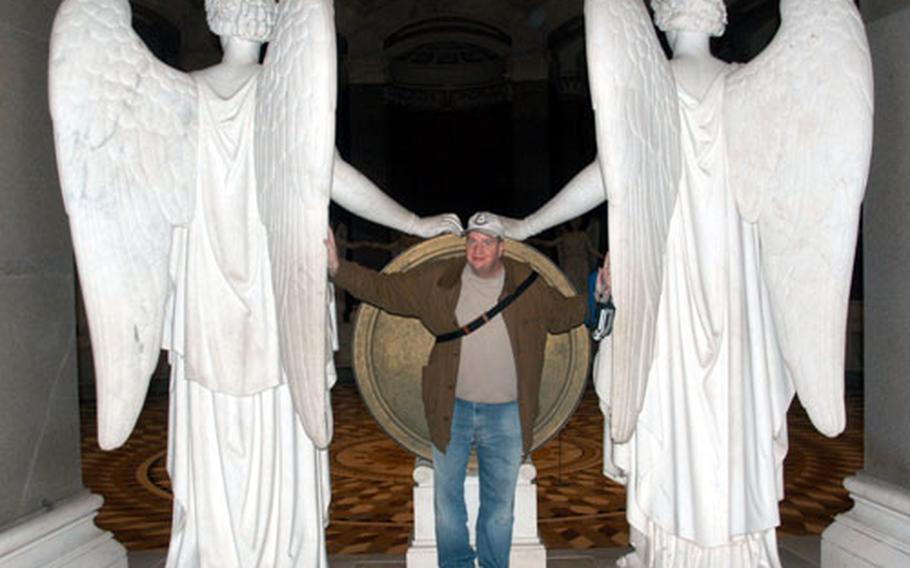 Tom Mulkern, an American who works at Mainz-Kastel, Germany, poses for a photograph to show the dimensions of the marble maidens surrounding the rotunda of the Befreiungshalle, or Liberation Hall. (Peter Jaeger / S&S) 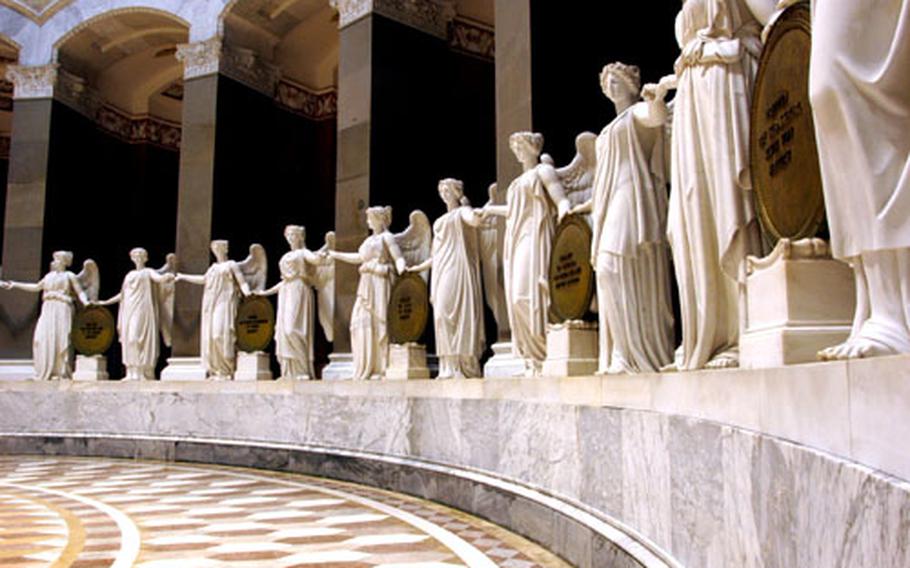 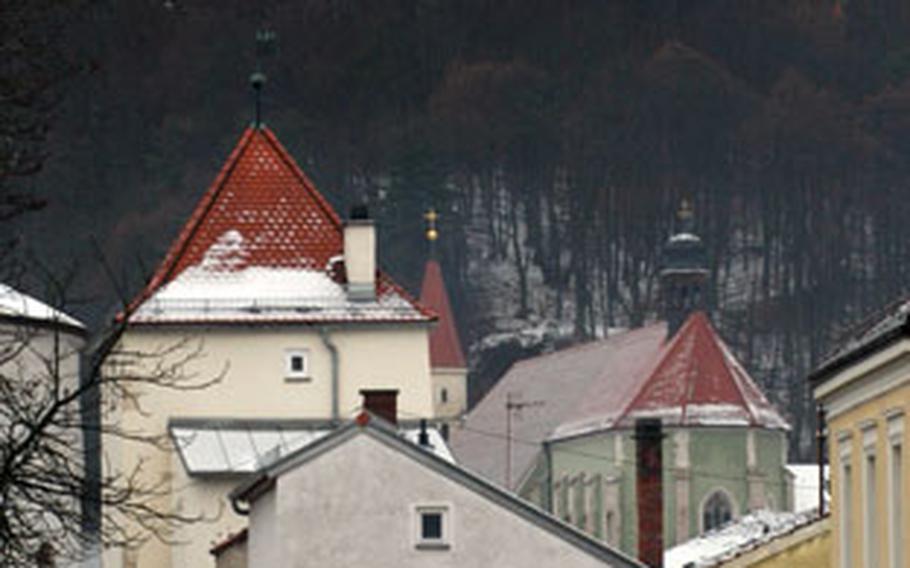 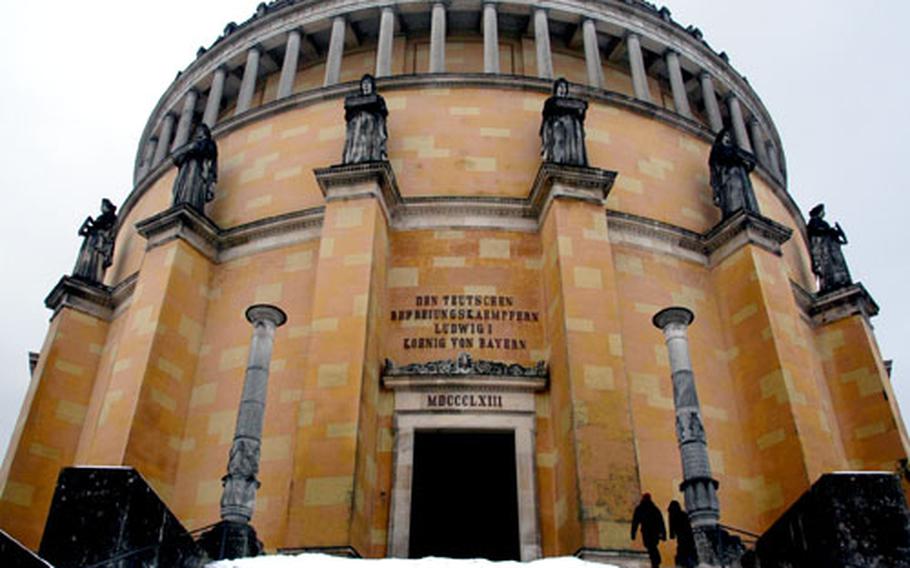 The inscription above the entrance of the Befreiungshalle declares: For the German Liberation Fighters. Ludwig I, King of Bavaria. (Peter Jaeger / S&S)

Tired and worn out from visiting Christmas markets in medieval Regensburg and busy Nuremberg?

Fed up with Gl&uuml;hwein and bratwursts and shoulder-to-shoulder shopping?

Try something different. Just 10 miles southwest of Regensburg is Kelheim, a picturesque town that offers a peaceful Bavarian Christmas setting. But its main attraction is a large hall that sits above the town and honors German tribes who joined in a huge battle to defeat an invasion led by French Emperor Napoleon Bonaparte.

The towerlike structure, called the Befreiungshalle, or Liberation Hall, was built between 1842 and 1863 by Bavarian King Ludwig I.

Its purpose is to honor fighters from several small German states who joined with troops from Britain, Russia, Spain, Portugal, Prussia, Austria and Sweden to defeat the French in the Napoleonic wars of 1813-15.

The major conflict was the V&ouml;lkerschlacht &mdash; or Battle of the Nations &mdash; near Leipzig, Germany, in October 1813. The battle involved more than 500,000 troops, making it, according to some historians, the largest conflict in Europe before World War I.

In the end, there were 85,000 killed on both sides, and the defeated French were forced to retreat westward.

The Befreiungshalle towers above Kelheim and the Danube River valley. Its exterior is decorated with 18 female statues on columns, symbolizing the 18 German tribes.

Inside, the hall is overwhelming. The rotunda, 90 feet in diameter, is crowned by a cupola 150 feet high. Natural light from a round window in the roof illuminates the solemn monument.

Embedded in the floor, made of different colors and types of marble, is a message that declares, &ldquo;Germans: Never forget why the freedom fight was necessary and why you were victorious.&rdquo;

Around the interior wall are 34 tall victory goddesses carved out of white marble and holding bronze shields between them with the names of the main battles of the war. The statues symbolize the 34 Germanic states that emerged after the Napoleonic wars.

From an inside galleria high up near the cupola there are impressive views looking down on the hall&rsquo;s interior.

From an outside gallery, there are views over the Danube and Kelheim &mdash; and on a clear day far beyond, to the surrounding lands that the tribes helped liberate.

COSTS: Admission is 3 euros for adults; children younger than 18 get in free. Groups of more than 15 pay 2.50 euros each.

FOOD: A stylish cafeteria is in the building that also houses the monument&rsquo;s ticket and information center. Kelheim has a wide variety of restaurants, many with Bavarian-style fare. The Weisses Brauhaus on Emil Ott Strasse has a friendly atmosphere, excellent German cooking and superb Bavarian beers.

INFORMATION: For the Befreiungshalle, call (+49) (0) 9441-682070 or e-mail befreiungshalle.kelheim@bsv.bayern.de, or visit the Kelheim page at www.schloesser.bayern.de.