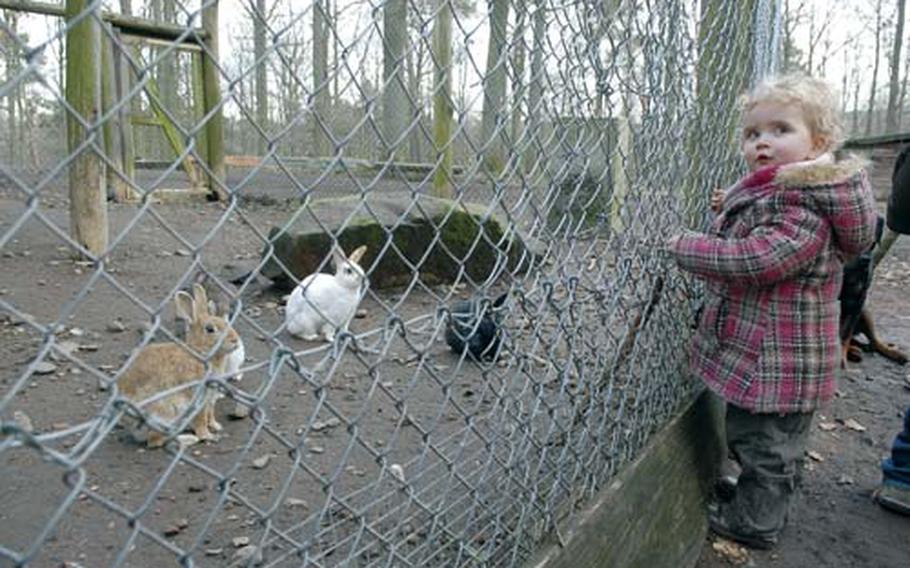 A German girl stands by the rabbit pen, as she and the bunnies inside admire one another. Her family fed bread to the rabbits. (Jennifer H. Svan / S&S)

Sometimes you don&rsquo;t have to travel far to discover something new. And so it was on an unusually bright February afternoon when a co-worker and I were delighted to find a wild game park only five minutes from our central Kaiserslautern office.

Sprawled over more than 62 leafy acres, the place struck me as this industrial German city&rsquo;s version of Narnia. I&rsquo;ve seen more beautiful parks, but finding this oasis of quiet so close to the urban jungle was most unexpected. Instead of a magical wardrobe, entry to the park is through an ordinary stone tunnel that spans a sharp divide between concrete and cars and forest and critters.

Gratification isn&rsquo;t instant; exertion is required to glimpse the animals. We walked along for a bit in our work shoes, gingerly avoiding the mud on the trail and admiring the stately hundred-year-old trees. We trudged uphill, observing that the park was not stroller-friendly. A mountain biker passed us with ease. Where were the animals?

Then we saw him: a doe-eyed cutie with what looked like a cactus growing atop his head. We fawned over him and his fuzzy antlers. I took a gazillion photos, a bit worried that we would not find any more fauna since, so far, he was the first after more than five minutes of hiking.

But this proved to be just the beginning of a mini-kingdom of animals that were once native to the region.

We saw muddy-nosed boar with black Brillo-pad ears; gentle horses and a pacing feline with fearsome white whiskers; and plump rabbits that sat up on their hindquarters like puppies begging for scraps.

The bunnies were sniffing the air, anticipating the bread being broken outside their pen. A German family with two small children was about to toss them a few bites. It&rsquo;s OK to feed the animals, the mother said, as long as you don&rsquo;t give them white-flour or sugary products.

But park caretaker Hermann Aesel said people should not feed the animals, which are fenced off in open-air enclosures. Indeed, park signs say the very same, except for one we saw reminding visitors of the no-sugar-or-white-flour rule. It appeared that people chose to follow the latter guideline. Another woman hand-fed her last morsels of wheat bread to some deer; she had given most of her provisions to the horses, she said. The animals all eagerly sidled right up to the fence, feigning interest in their human admirers &mdash; until they saw there was no food to be had.

With the afternoon sunlight quickly slipping away, we made it only as far as the boars, making plans to come back when the snorting swine reproduce. The wild-pig babies should arrive by the end of this month, Aesel said.

Having only wandered part way into the park, we also didn&rsquo;t see the wisent. The park has four of the European bison, an endangered species, Aesel said.

In a few months, the park will be in full bloom. It&rsquo;s on my list of places to take my 5-year-old daughter. We&rsquo;ll pack some carrots and apples &mdash; for the animals&mdash; and a picnic lunch for ourselves.