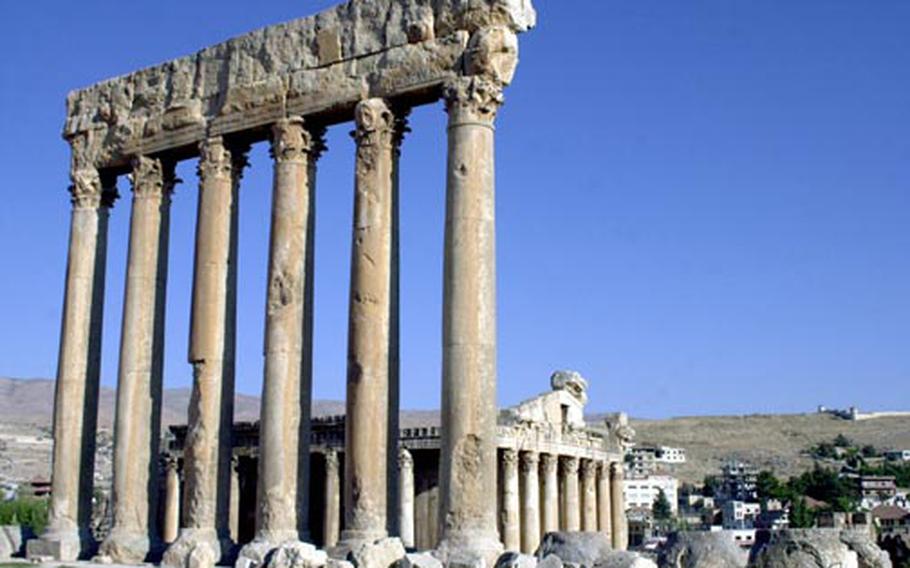 The temple ruins at Baalbek, Lebanon, are among the most awe-inspiring sites in the world, and are the largest Roman ruins anywhere. The complex can take the better part of a day to explore, and is best enjoyed in the early morning or late afternoon. (Joseph Giordono / S&S)

A trip through Lebanon offers a stunning variety of cultural, archaeological, religious and social choices.

From the chic, reconstructed quarters of Beirut to the Sunni- dominated bustle of Tripoli, and inland to the Bekaa Valley, it&rsquo;s a country of great variety. Here are some highlights.

BeirutBecause of its tortured history, Beirut is best known to some as the epicenter of a decades-long civil war and bloody foreign intervention.

Today, the city still shows its scars, with untold hundreds of buildings pocked with bullet holes, artillery strikes and crumbling walls. But a multibillion dollar rehab effort has the downtown area bustling with shoppers and people enjoying a long afternoon in a European-style cafe.

French, Arabic and English are spoken by roughly an equal number of people, and everything can be paid for in U.S. dollars, Lebanese pounds or euros. Lebanon, after all, was the gateway to the Middle East for just about every Western culture.

Rue Hamra, a busy street of shops, restaurants, nightclubs and hotels, is the dominant feature of West Beirut and is a good place to base yourself. You can book one of dozens of mid-range hotels (about $70 per night for a double) on the Internet, or just show up and bargain. Everything is negotiable in Lebanon.

Hamra is also home to the American University in Beirut and the National Museum, which is not to be missed. East of Hamra is the reconstructed downtown, with its mix of Ottoman and French-influenced buildings and modern glass-and- steel offices.

Visit the giant new mosque, with its shrine to assassinated former Prime Minister Rafiq Hariri, whose company is also responsible for the downtown reconstruction.

Take a walk along the Corniche, a long, beachfront avenue that offers great views, cafes and people-watching. Sample some Lebanese cuisine at one of dozens of great restaurants, then, if it&rsquo;s your taste, hit a raucous nightclub until the sun comes up. Avoid the southern suburbs between downtown and the airport, especially at night. They are slummy, uninteresting and home to Palestinian refugee camps and some ultra-conservative religious groups.

Southeast of Beirut are the Chouf Mountains, home of the Beit ed Dine palace and the Druze people.

BaalbekHands down, this place in the Bekaa Valley is one of the world&rsquo;s most impressive sites from antiquity. Awesome in its size and well-preserved condition, it is the largest example of Roman ruins anywhere. The Romans built the temples around 60 B.C. and made them big as an example of their power. The Romans and Greeks called the city Heliopolis (&ldquo;City of the Sun&rdquo;) and built massive temples to honor Jupiter, Bacchus and other gods.

You can easily spend an entire day wandering the site, which mostly survived several large earthquakes, the Crusades and the Lebanese civil war. Entry is about $6 per person.

Baalbek itself is a pretty small town and easily navigable by foot. For a taste of Old World charm, stay at the Palmyra Hotel, with its balconies overlooking the temple complex. Built in 1874, the hotel has seen better days, such as when it hosted Kaiser Wilhelm II, Charles de Gaulle and other luminaries of Europe. Sure, the bathrooms are a bit grubby, the hot water might take awhile and the beds are creaky, but it&rsquo;s got loads of atmosphere. Enjoy a beer on the balcony and watch the sun set behind the temples. Doubles run about $50.

Baalbek is also known as the birthplace of Hezbollah, the Shiite Muslim militant group. During the &rsquo;80s, Baalbek was the Islamic Jihad and Hezbollah headquarters and a no-go zone for foreigners. I indeed, it was where Terry Waite, Terry Anderson and several other hostages were held. The city is still plastered with larger-than-life billboards of the Ayatollah Khomeini and the green banners (featuring a Kalashnikov, among other symbols) of Hezbollah, but in recent years, tourism has trumped ideology. Hezbollah has even publicly adopted a policy of encouraging tourism.

It is best visited early in the morning or late in the afternoon: The crowds are smaller, the light is fantastic and, if you&rsquo;re traveling in the summer, you avoid the stifling heat of midday.

TripoliNear the northern Lebanon- Syria border, Tripoli has a fascinating old-town center surrounded by a bustling and sometimes- squalid new city. It is a staunchly Sunni area; women should dress conservatively and wear a scarf over their heads, men should avoid shorts.

The old town is dominated by a hilltop Crusader castle that offers great views to the ocean but is a shell of its former self. The town below is a maze of ancient streets, souks and mosques. While you can try to find your own way, we lucked into a friendly local guide who ushered us into places we likely would have missed on our own.

Tripoli is a place to immerse yourself in the sights, sounds and smells of the Arab street. Sit in a cafe, smoke flavored tobacco from a water pipe, drink strong coffee and play a few games of backgammon. Wind through the souk and find the traditional soap shops, where locals have been making soap from pure olive oil and fragrances for thousands of years. Explore the mosques and religious schools, called madrassas, and pick out the Roman and Greek artifacts overgrown by plants or signs.

You can buy beer and alcohol in a couple of restaurants and at a few tucked- away shops on side streets, but it&rsquo;s best to consume it in private.

ByblosOn your way to Byblos, about a 30- minute drive from Beirut, stop off at the Jeita Grotto, one of the world&rsquo;s largest cave complexes. The formations of stalactites and stalagmites, and the underground river are fascinating. And while you&rsquo;re in the area, hit the Harissa teleferique or cable car, on the road between Beirut and Byblos. The cable car runs from the coast to the top of a mountain, offering spectacular views. At the top is an enormous shrine to the Virgin Mary.

Byblos is a beautiful port city dominated by the remains of a large Crusader castle. Though it pales in comparison to Baalbek, it&rsquo;s a good starting point for a journey into the past.

You must have dinner at the Byblos Fishing Club at the old harbor. Run by Pepe Abed (a local legend, part Mexican and part Lebanese), the restaurant served the best dinner we had in Lebanon. Pepe, who&rsquo;s pushing 90 and still hangs around his place, was a diver and artifact hunter who has gathered thousands of ancient pieces, displaying some at his restaurant and donating others to museums.

The walls are lined with pictures of his famous guests, including Marlon Brando, Sophia Loren, Mick Jagger, former Argentine President Carlos Menem and Czech Republic President Vaclav Havel and others. He also runs 12 bungalows for rent on a quiet hillside.

On most days in Byblos, you can also find the jet set of Beirut, who pilot their ultra-chic motorboats and yachts to Byblos, have a meal, hit a club, then go home. They&rsquo;re easy to spot: tanned, beautiful, and always with their cell phone ear-pieces in, Rolexes on their wrists and ridiculously expensive sunglasses on their faces.

Bcharre and The CedarsThe symbol of Lebanon is the cedar tree. Once ubiquitous, today there remains only a small stand of around 300 trees in the high mountains.

Since ancient times, the people of Lebanon traded cedar wood for marble and other goods. The cedar was used, particularly by the Greeks, as shipbuilding material and was renowned for its strength. But, trade made the trees nearly extinct.

These days, the last remaining stand of cedars is perched on the edge of the Qadisha Valley near the Maronite town of Bcharre. The cedars, or Al Arz (&ldquo;The Cedars of the Lord&rdquo;), were placed under the protectorship of the Maronite Patriarchs of Bcharre in the mid-1800s, and all further logging was forbidden. A small chapel stands in the midst of the trees, some of which are 100 feet tall and 1,500 years old. Craftsmen line the road leading to the cedars, hawking anything you can imagine carved from a piece of fallen cedar wood.

Bcharre is also the birthplace of Khalil Gibran, the most famous and beloved of Lebanon&rsquo;s poets.

In the summer, the town offers respite from the heat of Beirut and the coast, and, even in August, gets cold at night.

AanjarThe Umayyad ruins at Aanjar offer another stellar example of antiquity in the Bekaa Valley. Discovered in the 1940s, the ruins date from around 700 A.D. and, with a little imagination, bring to life what an ancient settlement would have looked like. The remains of the settlement wall, main colonnade, baths complex, palace and a later mosque are all well-preserved.

Once inside the walls, you&rsquo;re literally left alone to climb on and explore whatever you want, and it&rsquo;s clear people do so. On the day we were there, portions of the ruins were littered with garbage &mdash; papers, bottles, even bits of an old mattress.

As disappointing as the garbage was, we quickly forgot it when we exited the walls, looked for our driver and happened upon a Lebanese wedding party. They piled out of a few tinted-window SUVs, blared traditional music, and danced joyfully around the newly married couple. It was among the most pure expressions of happiness I&rsquo;ve witnessed, and they insisted everyone in the area join the party.

So we did, creating one of the best moments of a memorable trip.