Honoring the fallen at Lorraine cemetery in northern France Groves of trees, grass and scarlet roses frame many of the 10,489 crosses and Stars of David that mark graves of fallen American veterans of World War II at the Lorraine American Cemetery in St. Avold, France. (Terri Barnes / Special to S&S)

Groves of trees, grass and scarlet roses frame many of the 10,489 crosses and Stars of David that mark graves of fallen American veterans of World War II at the Lorraine American Cemetery in St. Avold, France. (Terri Barnes / Special to S&S) 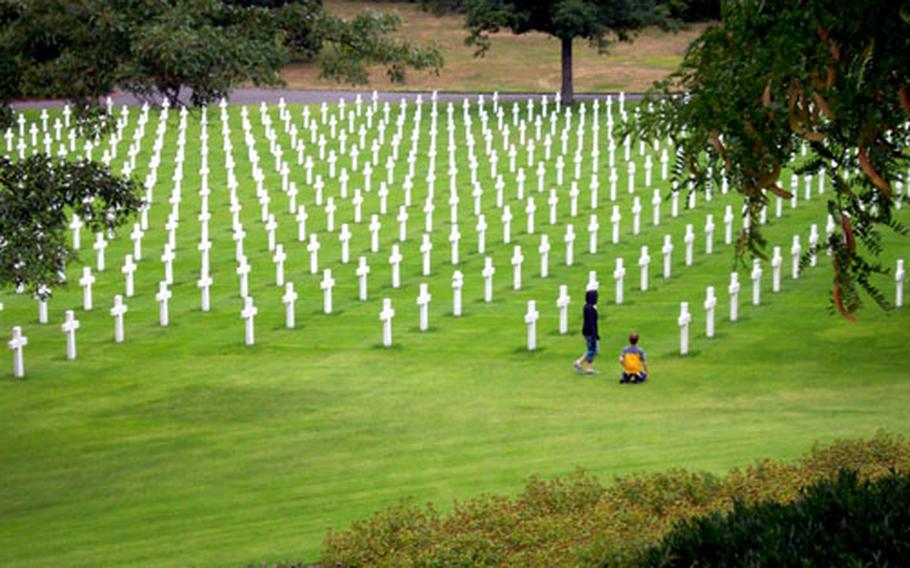 Visitors look at the rows of military graves, perfectly aligned in every direction. Originally about 16,000 troops were buried at Lorraine American Cemetery, but many were later returned to the United States for burial. (Terri Barnes / Special to S&S) Wesley Barnes, 10, spots a cross draped with a rosary, possibly left as a reminder of prayers said on behalf of the veteran buried there. (Terri Barnes / Special to S&S)

After a day at Disneyland and a day sightseeing in Paris, it does seem a bit incongruous. But the children are happy to stretch their legs, and they are about to learn something.

An inconspicuous sign in the parking lot near the town of St. Avold, France, informs us we are at Lorraine American Cemetery, the largest American World War II cemetery in Europe.

A brochure from the visitors center tells us a little more. Buried here are 10,489 American soldiers, most of them killed while driving German forces from Metz toward the Siegfried Line and the Rhine River.

A pathway leads us beyond the visitors center and around a wall. We emerge at the crest of a hill with the cemetery spread out below us and a monolithic stone building on our left. The bright green of the grass contrasts with the pure white crosses and the dull sky. We caution our children to be quiet and respectful, but the place inspires awe without our admonition.

The monolith is the chapel, overlooking and facing the grounds below. The height of the building &#8212; nearly 70 feet &#8212; and its huge bronze doors pay homage to the scale of sacrifice it represents.

Inside, we find an altar flanked by U.S. flags. Service flags of various military units adorn the side walls. The wall behind the altar has an inscription referring to the &#8220;glorious band of heroes.&#8221; On the wall stretching high above are large sculpted figures: The largest, in the center, represents freedom.

On the chapel&#8217;s side walls, maps depict the Allied campaign, giving an overview of the war. Another inscription, a quote from Dwight D. Eisenhower, reads in part, &#8220;with grateful remembrance of their sacrifice and with the higher resolve that the cause for which they died shall live.&#8221;

Back outside, we walk down wide stairs and through the garden of crosses and stars. The perfect white rows, aligned in every direction, look at first to be in complete uniformity. But a closer look reveals individuality &#8212; crosses for some, Stars of David for others.

Soon the kids find more to distinguish one marker from another: A cross with a necklace hanging from it; another with a rosary; yet another with small flags sticking out of the grass below. We find soldiers who shared our family names or from states where we have lived. We find two brothers buried side by side.

We see some that say simply: &#8220;Here lies in honored glory a comrade in arms whose name is known only to God.&#8221; Later we learn there are 155 unknowns buried here.

&#8220;Look, Mom, this one has gold letters,&#8221; says my youngest, discovering one of the four Medal of Honor recipients buried at Lorraine. Most of the stone crosses are simply engraved with the name, rank, home state and date of death of the soldier laid to rest there. Medal of Honor recipients&#8217; markers are inscribed in gold, and a gold star is added above and the words &#8220;Medal of Honor&#8221; below.

We walk through the entire cemetery, not together, but seeing one another from a distance in the large open area, occasionally meeting as we take our own paths through the reminders of ultimate sacrifice, realizing each marker represents the end of a life just like our own.

At the far end, opposite the chapel is a stone platform decorated with a large carved eagle. Here there are benches where visitors can rest, meditate or take in the view of the cemetery below and the chapel beyond.

No one asks whether it is time to go until raindrops begin to fall. We walk back up the stairs and around the other side of the chapel. When we approach the wall from this side, we see it is inscribed with the names of soldiers who died in battle, but whose bodies were not found for burial, 444 names.

Maybe a huge cemetery is an odd side trip for a Parisian excursion. But walking among the graves and remembering the sacrifices made by American veterans silences any complaints or objections.

Terri Barnes is a writer living in Ramstein, Germany. Contact her at 3redbarnes@tks-net.com.