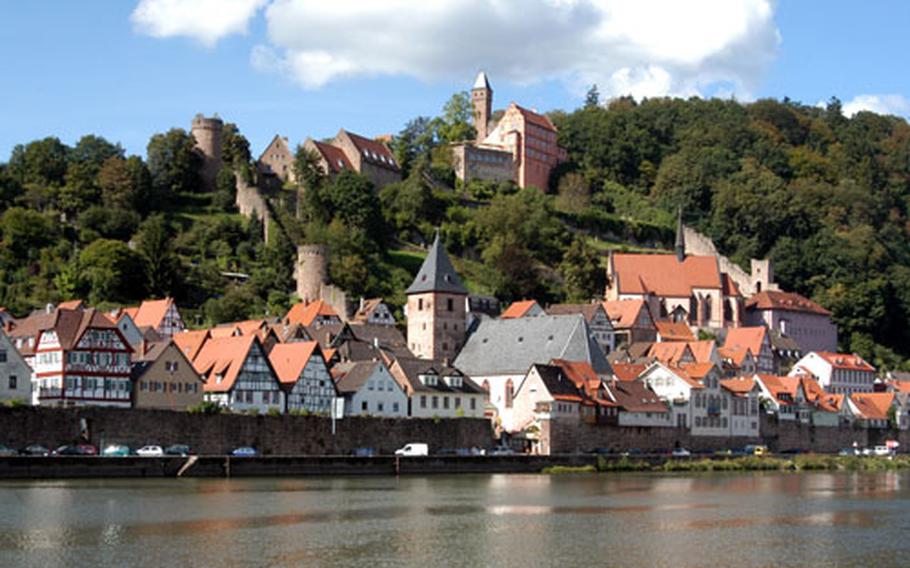 Burg Hirschhorn towers over the town and the Neckar river. At center is the Mitteltor, once a city gate, and now the bell tower of the Catholic church. Half-way up the hill at right is the Klosterkirche, once part of a Carmelite cloister. (Michael Abrams / S&S)

Burg Hirschhorn towers over the town and the Neckar river. At center is the Mitteltor, once a city gate, and now the bell tower of the Catholic church. Half-way up the hill at right is the Klosterkirche, once part of a Carmelite cloister. (Michael Abrams / S&S) 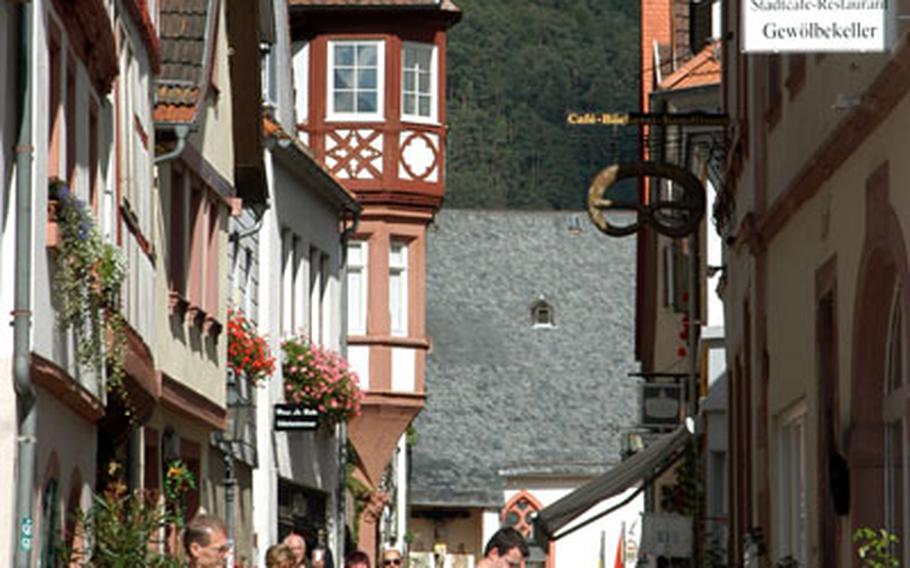 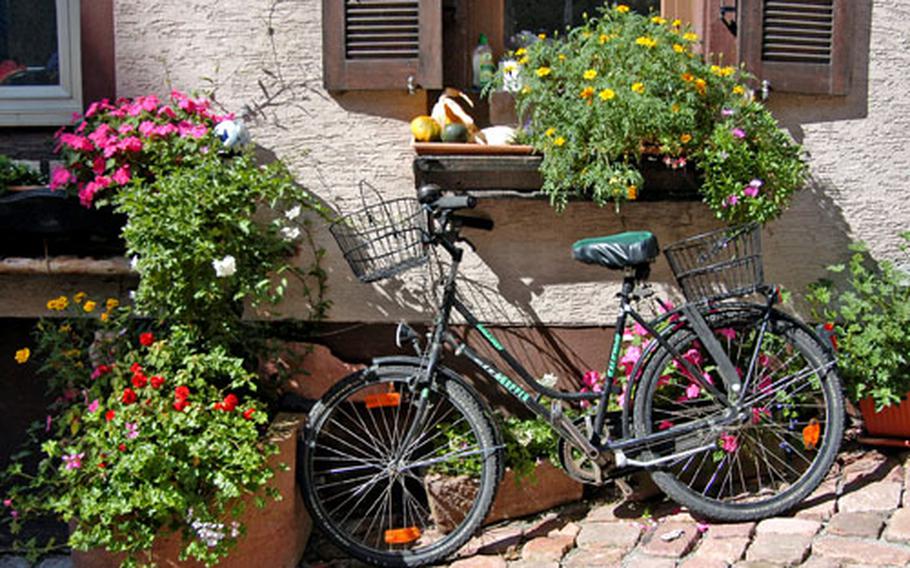 Hirschhorn, with its flowerpot-decorated cobblestone streets and its towering castle, is a nice place to spend a day. (Michael Abrams / S&S) 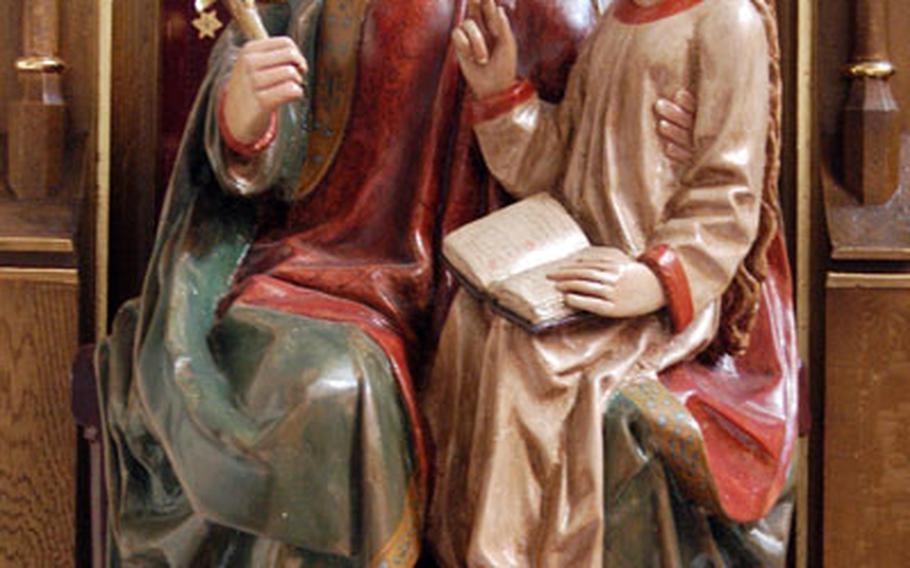 This statue of St. Anna sitting on Mary&#39;s lap is in the St. Anna chapel of Hirschhorn&#39;s Klosterkirche. The church, once part of a Carmelite cloister, was built around 1400. The chapel was added at the beginning of the 16th century. (Michael Abrams / S&S)

Hirschhorn is one of those charming German towns popular with tourists. It is on a river, it has half-timbered houses, cobblestone streets, an age-old church and a castle towering above it.

The town has just one problem. A little more than a dozen miles downstream, there is another town with the same attributes, which just happens to be one of the most visited places in Germany: Heidelberg.

So many people never make the journey up the Neckar to visit Hirschhorn. But they should. If you want to escape the crowds of Heidelberg, add another castle town to your itinerary, or spend a romantic day (and maybe night) somewhere, Hirschhorn is a good candidate.

The town dates to 1391, but the family of nobles who founded it was first mentioned more than 100 years earlier. Under the von Hirschhorns, and the protection of the castle, the town grew prosperous through commercial fishing and rafting on the Neckar. After the death of the last of the line, Friedrich von Hirschhorn in 1632, the town changed hands many times until it fell to the counts of Hesse Darmstadt in 1802. It still is in Hesse, near the most southern tip of the state.

The castle, Burg Hirschhorn, towers over the town, and is its most popular sight. But on a stroll through the town and up to the castle, you pass other places worth a look. Some are on the main street, Hauptstrasse, and others are along the city wall on the river.

In the market place is the Marktkirche (market church). Built in 1628 as a Protestant church, it was closed during the Counter-Reformation and turned into a Catholic church in 1730, which it remains. An interesting aspect of the church is its bell tower. Built in the 14th century, it was once the city gate.

Pass through it and look for signs for Klosterkirche and Schloss. You now begin the climb to the castle. Halfway up is the Klosterkirche, the church of a former Carmelite cloister.

There are bigger and grander churches, but the Klosterkirche is beautiful in its simplicity. It has an ornate altar, and faded frescoes decorate the walls. At the rear are gravestones of the knights of Hirschhorn.

On the south side is the Saint-Anna- Chapel added to the church in 1513. Note on the altar, the statue of St. Anna sitting on Mary&rsquo;s lap, and the knights&rsquo; coat of arms on the ceiling.

Outside, the path continues up to Burg Hirschhorn. Construction of the castle dates to the mid-13th century, and the Knights of Hirschhorn ruled over the countryside from here. It was expanded in the 14th, 15th and 16th centuries. The castle walls still run down to where they meet the walls of the city.

Today it is a restaurant and hotel. From its terrace and tower there are scenic views of the town and the Neckar valley below. The hotel is a romantic retreat for couples.

Back down the hill, cross the Neckar for a beautiful glimpse of Hirschhorn. You&rsquo;ll be glad you made the journey.

Hirschhorn is on the Neckar River, 15 miles east of Heidelberg, Germany, on highway B37. The Klosterkirche and the Marktkirche are open from 10 a.m. to 6 p.m. daily, April through October. The castle is open daily except Monday, and closed from mid-December to the end of January.

Cost: Entrance to the churches is free, but a donation for the upkeep is welcome. Prices for a double room at the castle start at 58 euros for one person and 88 euros for two. It costs 2 euros to climb the castle tower.

Eats: There are good restaurants and caf&eacute;s in Hirschhorn. The best is the restaurant in the castle, with a great view over the town and the Neckar &mdash; but it is also the most expensive.