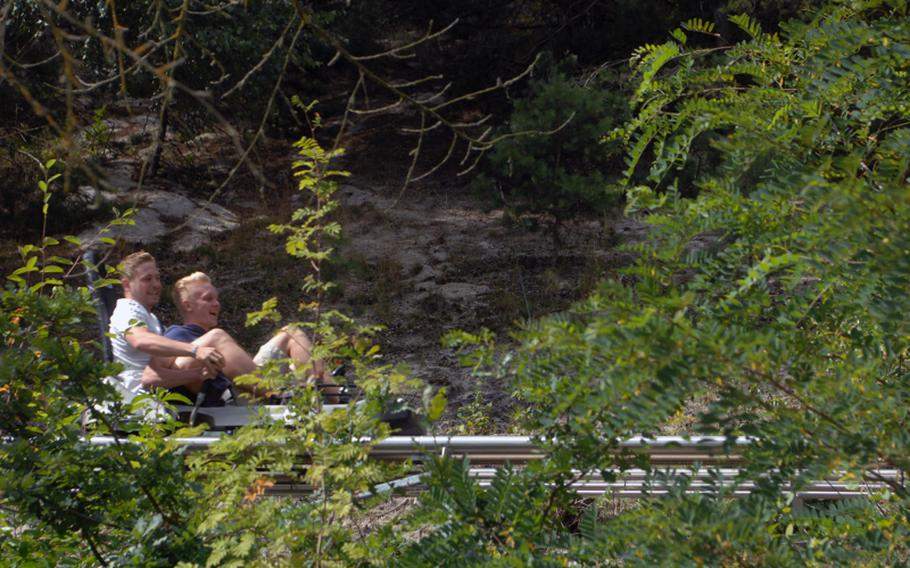 Visitors at Monte Kaolino amusement park in Hirschau, Germany, ride a handbrake coaster down the sand hill. Centered around a roughly 400-foot sand hill left over from decades of kaolin and quartz mining, Monte Kaolino is an odd, but fun place to spend a summer day in the Grafenw??hr and Vilseck area. (Steven Beardsley/Stars and Strip)

Visitors at Monte Kaolino amusement park in Hirschau, Germany, ride a handbrake coaster down the sand hill. Centered around a roughly 400-foot sand hill left over from decades of kaolin and quartz mining, Monte Kaolino is an odd, but fun place to spend a summer day in the Grafenw??hr and Vilseck area. (Steven Beardsley/Stars and Strip) 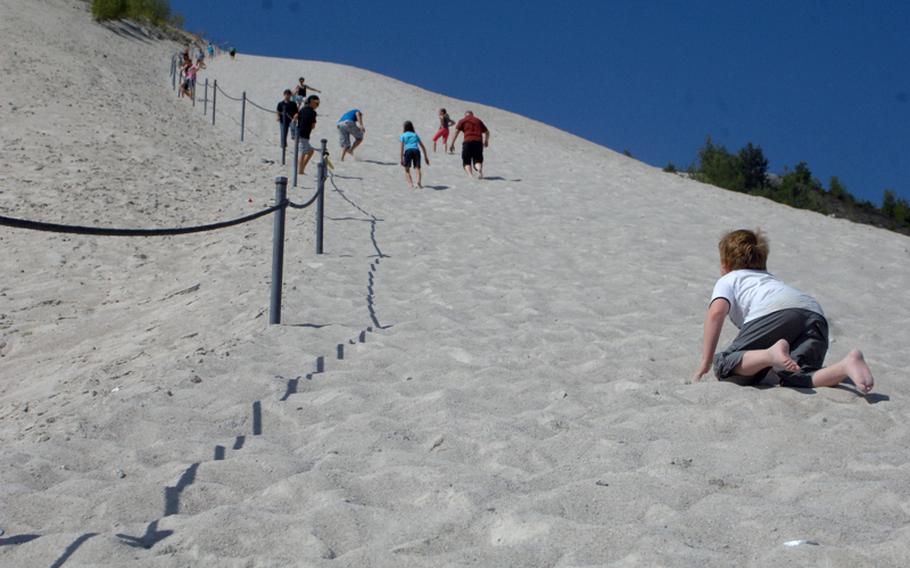 A young visitor at Monte Kaolino amusement park in Hirschau, Germany, struggles to climb the massive sand hill at the center of the park. Left over from decades of quartz and kaolin mining, the nearly 4 00-foot tall sand hill rewards those who persevere up its slopes with a broad view of the region. (Steven Beardsley/Stars and Strip) 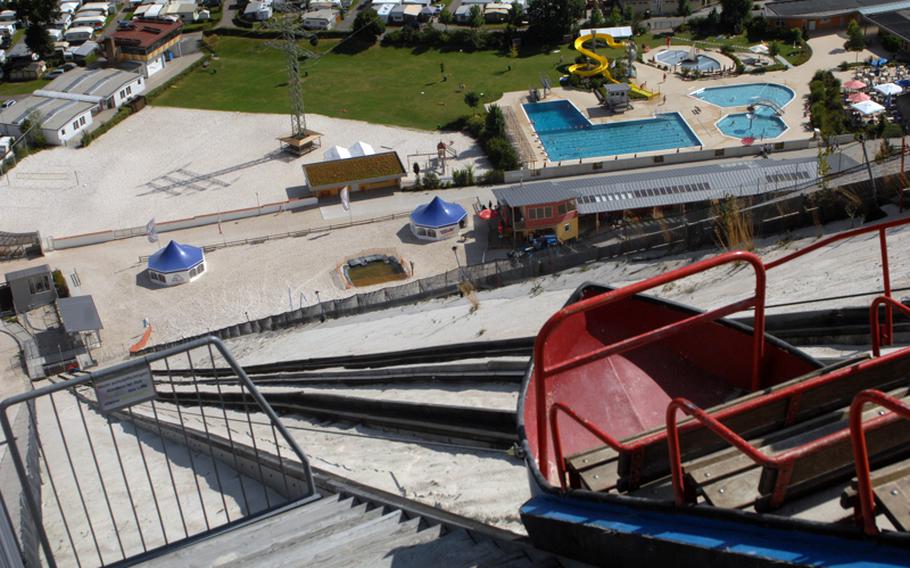 A lift car overlooks the swimming area from the top of Monte Kaolino, the roughly 400-foot sand hill formed during decades of mining in Hirschau, Germany. Now an amusement park with swimming pools and a handbrake coaster, Monte Kaolino draws crowds of locals and Americans on summer days. (Steven Beardsley/Stars and Strip) 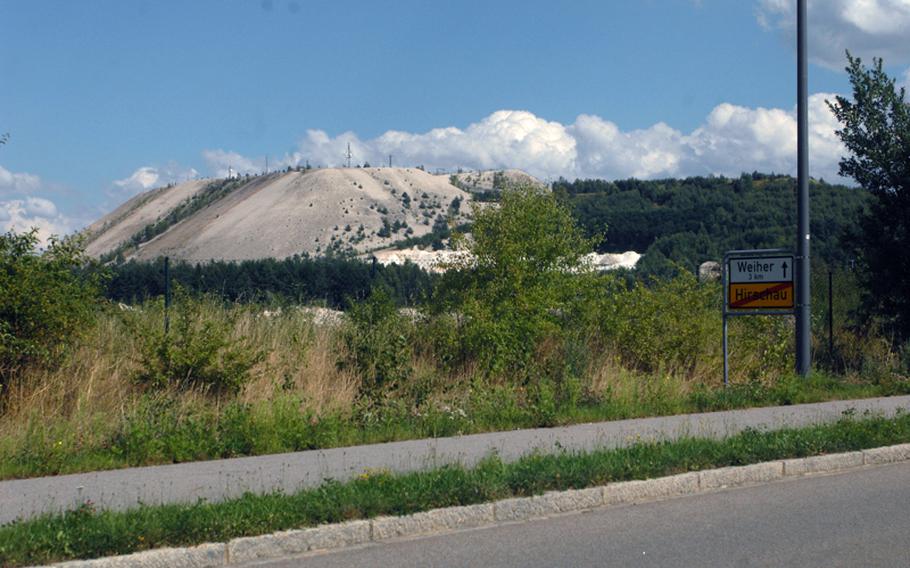 Monte Kaolino as seen from a distance. The roughly 400-foot tall sand hill is the result of decades of mining in Hirschau, Germany. Now an amusement park with swimming pools and a handbrake coaster, Monte Kaolino draws crowds of locals and Americans on summer days. (Steven Beardsley/Stars and Strip) 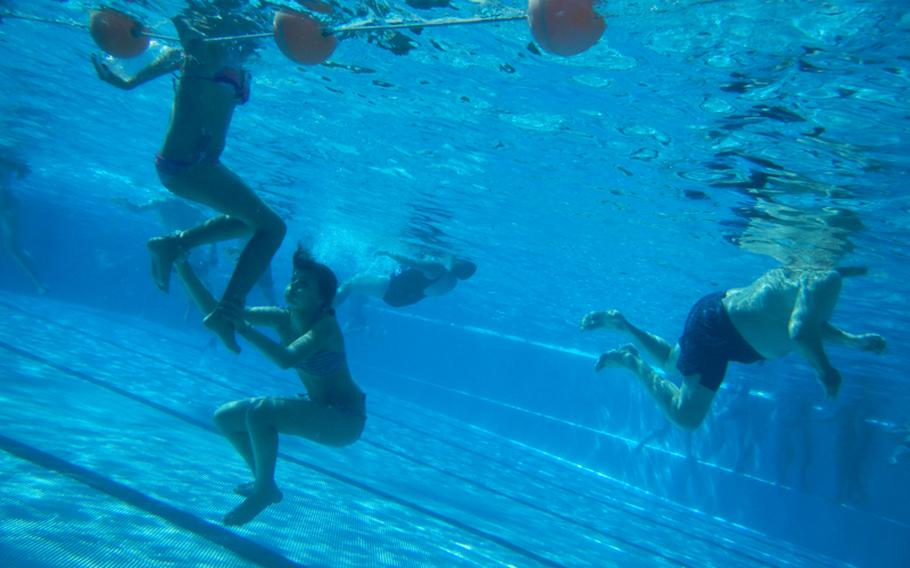 Children and adults swim in one of the pools at Monte Kaolino, an amusement park in Hirschau, Germany, in the Grafenw?hr and Vilseck area. Built around a roughly 400-foot-high heap of sand left over from decades of mining in the area, the park is a popular draw on summer days. () 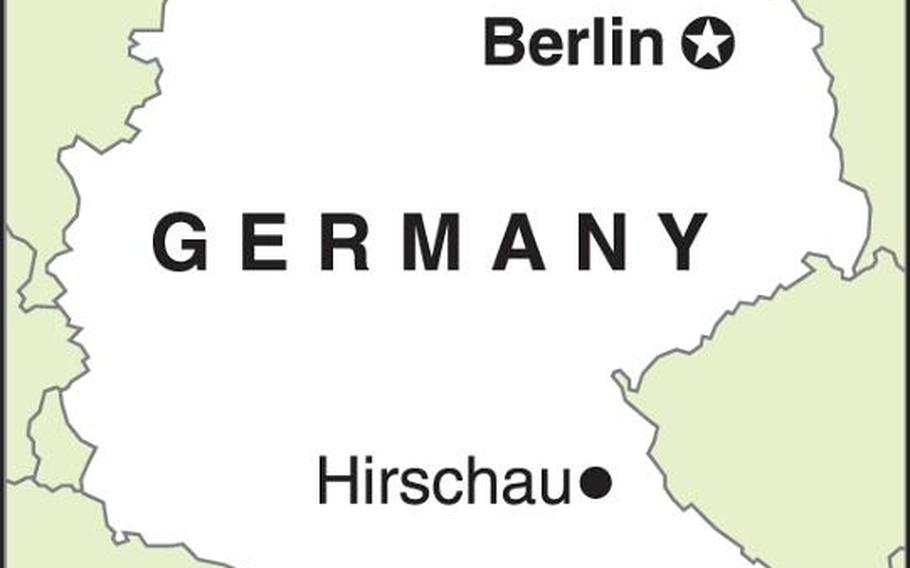 Monte Kaolino sticks out of the lush Bavarian landscape like a scar &mdash; a massive sand heap produced by decades of nearby mining.

Some enterprising soul saw opportunity in that heap, and today it provides the setting for an amusement park that draws crowds of Germans and Americans in the Grafenw&ouml;hr and Vilseck area this time of year.

With well-maintained swimming pools for children and adults, a handbrake coaster that rushes down the hill and the opportunity to climb, ski or snowboard the sand slopes, this weird attraction is a summer escape for families and thrill-seekers alike.

The sand hill has long been a fixture outside the town of Hirschau, Germany, where mining began in 1833, according to Monte Kaolino&rsquo;s website. As workers extracted quartz and kaolin, they tossed the leftover sand into a growing heap.

Mining continues around Monte Kaolino today, but the hill has since been turned over to the masses and transformed into what Germans call a &ldquo;freizeit,&rdquo; or leisure, park.

Its most popular attraction in summer might be the swimming area. Set at the bottom of the sand hill, the area offers a lap pool for adults with a separate deep end and diving boards, as well as a large children&rsquo;s pool with fountains and a kiddie pool.

Families can claim beach chairs along the pools&rsquo; edges or set out towels on a grassy bank. Clean changing areas and restrooms with showers are nearby, and a restaurant and snack stand offer the basics. Admission to the pools is 3.50 euros for adults and 2 euros for children, with discounts after 5 p.m.

The park&rsquo;s real attraction is the sand hill itself, which rises nearly 400 feet. Visitors can pay to take a tracked lift to the top (2.50 euros for adults, 1.50 euros for children), or they can hoof it for free by removing their shoes and following a rope guide up the side.

Depending on one&rsquo;s outlook, climbing Mount Kaolino is either a challenge worth overcoming or a special kind of of hell. Every footstep sinks into the soft, pebble sand and slides backward, meaning each step forward feels like another step back.

Those who persevere will be treated to a broad view of the region, from the nearby mining operations with their deep pits and jagged white walls to spinning wind turbines over a distant tree line.

Yet it&rsquo;s the descent that makes the climb worthwhile. The sand that frustrated coming up proves crucial on the way down, capturing each step and acting as a brake. Climbers can run down the hill and easily skid to a stop.

On the other side of the rope guide, away from climbers, some visitors choose to ski or snowboard down the hillside. It&rsquo;s more than a novelty, as the hill recently hosted a tournament for downhill sand skiers from across the area. For those interested in trying, the Monte Kaolino sports club, located near the lift, rents equipment.

Finally, visitors can check out the handbrake coaster near the lift for an even faster way to descend the hill. A 3-euro ticket (2.50 euros for children) buys a seat in a single coaster car that is first lifted to the top of the hill by chain before being released to gravity &mdash; and a handbrake. Cars can reach as fast as 24 mph.

Whatever the method, a climb up Monte Kaolino and a dip in the pools is worth a visit on a summer day.