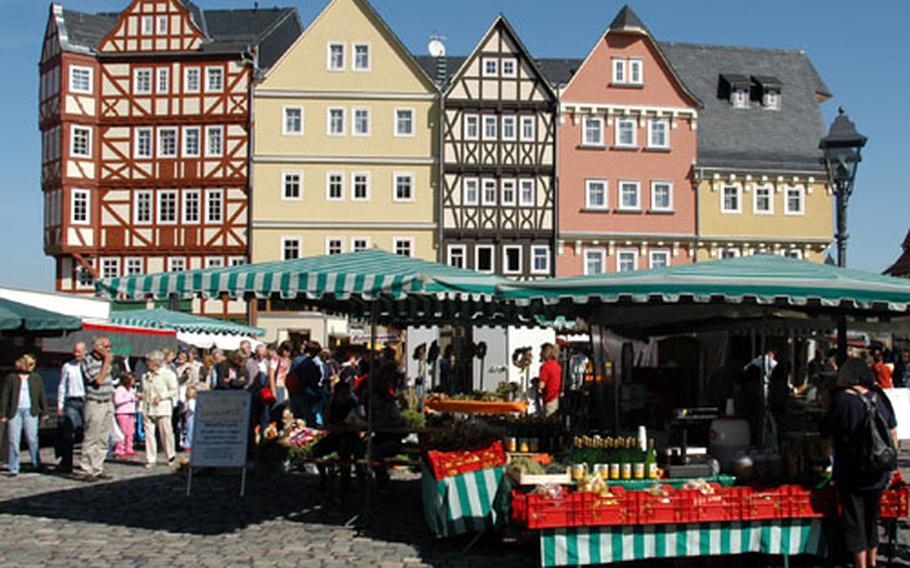 The Marktplatz, or market place, at the Hessenpark. None of the buildings at this open-air museum originaly stood here. Historical buildings in towns and villages in the German state of Hesse that were in disrepair were dismantled, restored and rebuilt here at the park. The farmers&#39; market seen in this photo takes place five or six times a year. The next and final market for 2003 takes place Oct. 12. (Michael Abrams / S&S)

The Marktplatz, or market place, at the Hessenpark. None of the buildings at this open-air museum originaly stood here. Historical buildings in towns and villages in the German state of Hesse that were in disrepair were dismantled, restored and rebuilt here at the park. The farmers&#39; market seen in this photo takes place five or six times a year. The next and final market for 2003 takes place Oct. 12. (Michael Abrams / S&S) 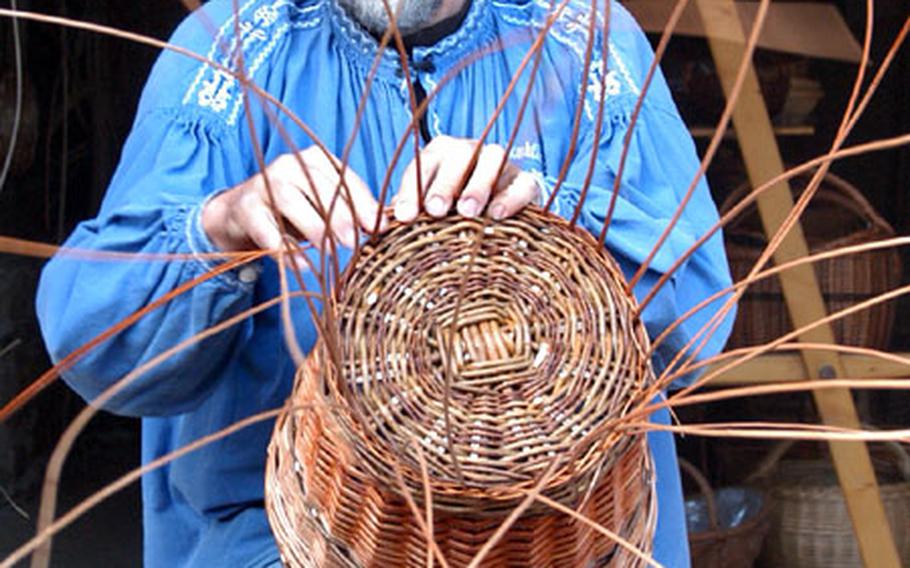 A basketmaker weaves at the Hessenpark. On weekends various craftsmen demonstrate how things were done in the old days. (Michael Abrams / S&S) 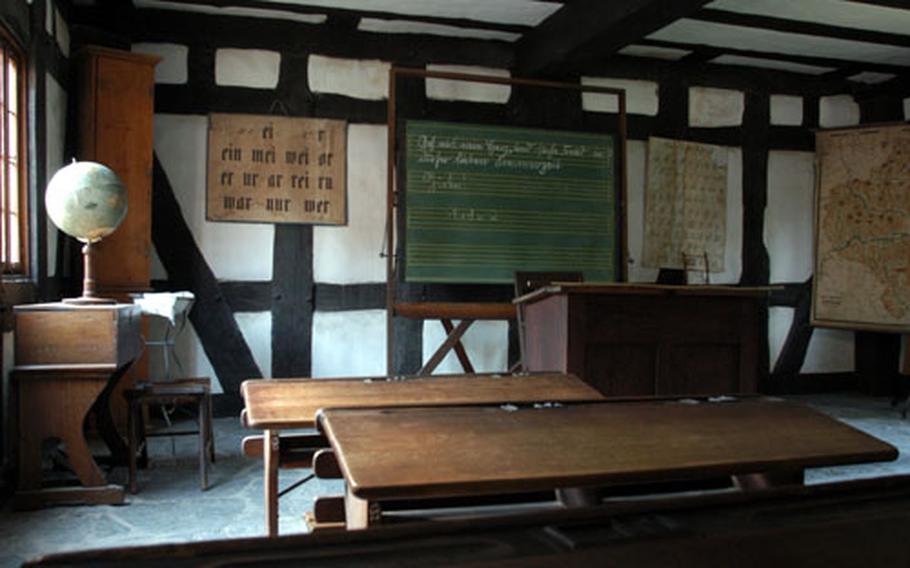 This is what a classroom looked like in Frickhofen at the end of the 19th and beginning of the 20th centuries. It is on the ground floor of the Frickenhofen town hall, built around 1750 and now on display at the Hessenpark open-air museum. (Michael Abrams / S&S) 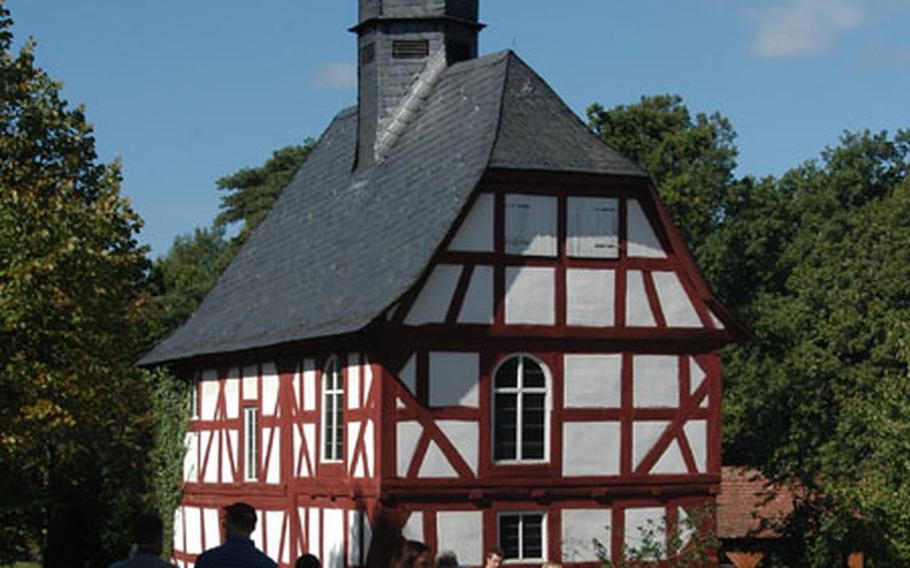 Visitors walk though the Hessenpark open-air museum past the half-timbered church from Niederhörlen. The Hessenpark features historical buildings from the German state of Hesse that were once in disrepair, then restored and rebuilt here. (Michael Abrams / S&S) 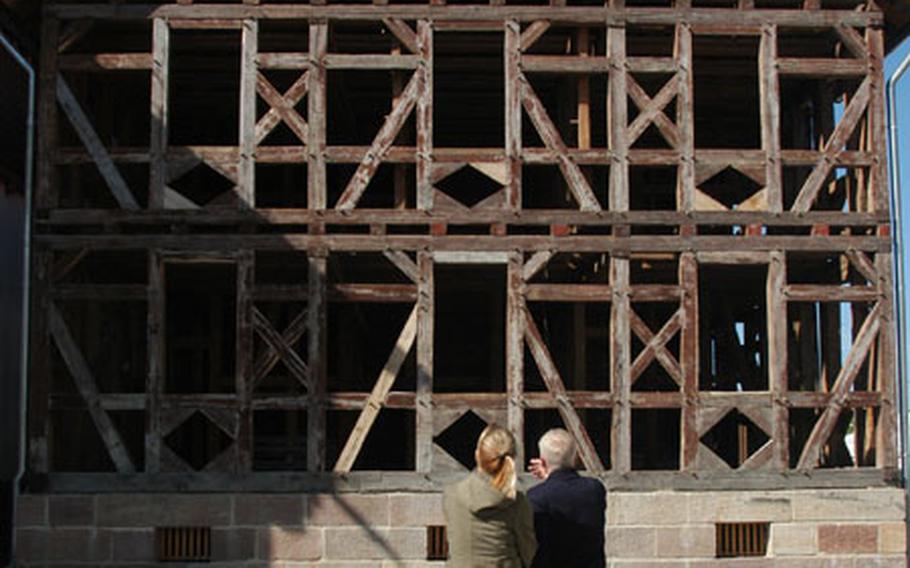 The skeleton frame of a half-timbered house on the market place at the Hessenpark. The spaces between the timber were filled with different materials like whattle and daub, bricks or stone. This usually depended on what was available, or what the owner could afford. (Michael Abrams / S&S)

The first time most of us met the Hessians was in our history books when Gen. George Washington crossed the Delaware River and kicked their behinds during the American Revolution in 1776.

Well, if you ever wondered who those Hessians were, and where and how they lived, you can find out at the Hessenpark, an open-air museum north of Frankfurt.

Hessen &mdash; or as we call it, Hesse &mdash; is a German state. You were in Hesse if you were ever stationed in Friedberg, Giessen, Hanau, Darmstadt, Wiesbaden, Frankfurt, Fulda, Bad Hersfeld, B&uuml;dingen, Butzbach, Gelnhausen, Babenhausen or at Rhein-Main Air Base.

Hessenpark is like a Hessian village. It has houses and churches, barns and stables, windmills, a market place and even a synagogue.

And while it might seem that these houses have been here for centuries, they have not.

All the structures, most of them built in half-timbered style, once stood in a real town or village somewhere in Hesse. All were in desolate condition.

To save the buildings and to preserve history, Hessenpark was established in 1974. The buildings were dismantled piece by piece, refurbished and rebuilt at the park.

In the past 29 years more than 85 buildings have been reconstructed. But the job isn&rsquo;t done. The parts to more than 100 buildings are stored on the site waiting to be rebuilt.

In all, the buildings trace 400 years of Hessian life.

From the park entrance, visitors walk among half-timbered houses down to the Marktplatz, the marketplace. Here, in the beautifully restored buildings are two restaurants, a bakery, a general store selling typical Hessian food products, a tourist information office for the Taunus region and a hotel.

The great thing is, that a visit to the marketplace is free. You can have a meal of Hessian specialties, or shop for bread, dairy products and sausage without paying admission. And if you are lucky, they might be having a farmers&rsquo; market, something occurs on Sundays about five times a year.

Beyond the marketplace is the actual entrance to the open-air museum.

As you will notice, although it is a museum, the Hessenpark is very much alive. Chickens peck for feed, cows and sheep graze in the meadows beyond the houses. Tobacco and hops grow in the fields. A basket-maker weaves wicker. A woman works over a loom, weaving cloth. The hammer of a blacksmith bangs away. A horse-drawn wagon, full of visitors, ambles through the park.

One aim of the park is not only to show what the buildings looked like back then, but also to show what rural life was like. On different days, there are demonstrations of how cloth was woven, pottery was made, rope was braided, sheep were sheared and beer was brewed, bringing the bygone days of Hesse back to life.

Directions: Hessenpark is at Neu-Anspach off Autobahn 5, north of Frankfurt and west of Friedberg. Leave A-5 at the Friedberg exit and head toward Bad Homburg and Usingen. At the next intersection, take a right and follow signs to the park.

From Friedberg, stay on highway 455 and pass under the autobahn, then turn right at the intersection. Follow signs to the park.

From Wiesbaden take either A-66 to A-5 or A-3 to Idstein, then highway 275 to Usingen and Neu-Anspach for a more scenic drive.

Cost: Admission is 4 euros for adults and 2.50 euros for children. A family ticket costs 10 euros. The 155-page guide that explains the history of the buildings costs 5.10 euros and is worth it for its detail. Parking is free.

Food: There are two restaurants on the Marktplatz. The Zum Adler offers Hessian specialties. Behind the Adler, there is a self-service snackbar serving sausages with a roll for 3.40 euros, pork schnitzel with a roll for 3.20 euros and fries for 1.80 euros. There is indoor and outdoor seating.

There are also picnic tables and benches throughout the park for picnics.

The market shop sells drinks, ice cream and Hessian food specialties and souvenirs. The bakery next door sells bread and other baked goods.

On Oct. 12, the last Farmers Market of the year will be held on the Marktplatz featuring food and produce from the region. Markets next year are on March 21, April 4, Aug. 29, Sept. 12 and Oct. 17.