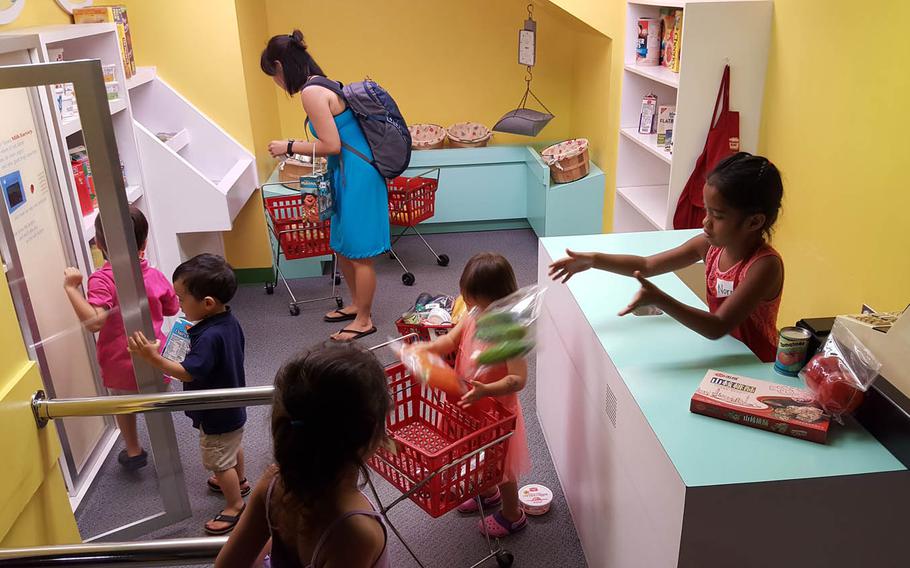 Buy Photo
Young grocery shoppers jockey for position at a store in "Your Town," an interactive display at Hawaii Children's Discovery Center in Honolulu. (Wyatt Olson/Stars and Stripes)

Buy Photo
Young grocery shoppers jockey for position at a store in "Your Town," an interactive display at Hawaii Children's Discovery Center in Honolulu. (Wyatt Olson/Stars and Stripes) 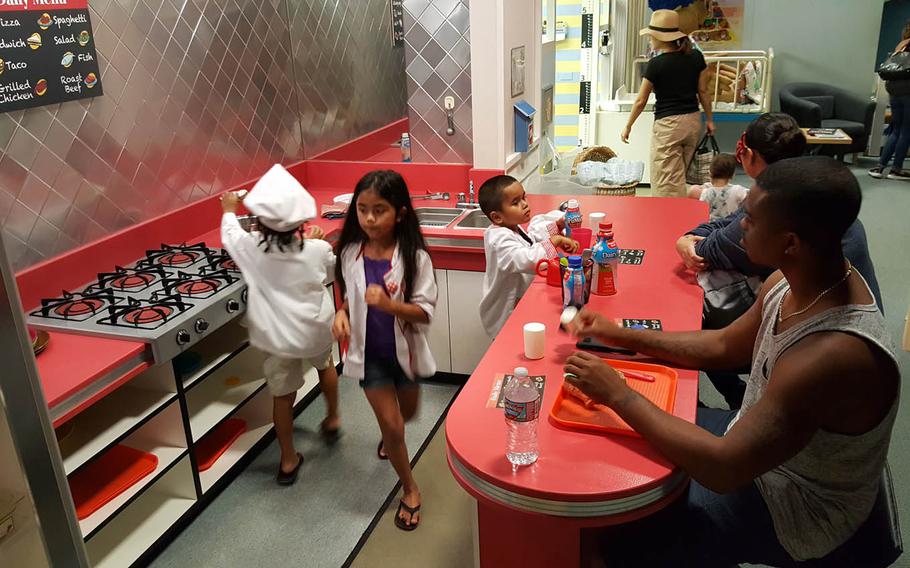 Buy Photo
Parents await their meals while seated at the Feel Finer Diner, staffed exclusively by their kids at the Hawaii Children's Discovery Center. (Wyatt Olson/Stars and Stripes) 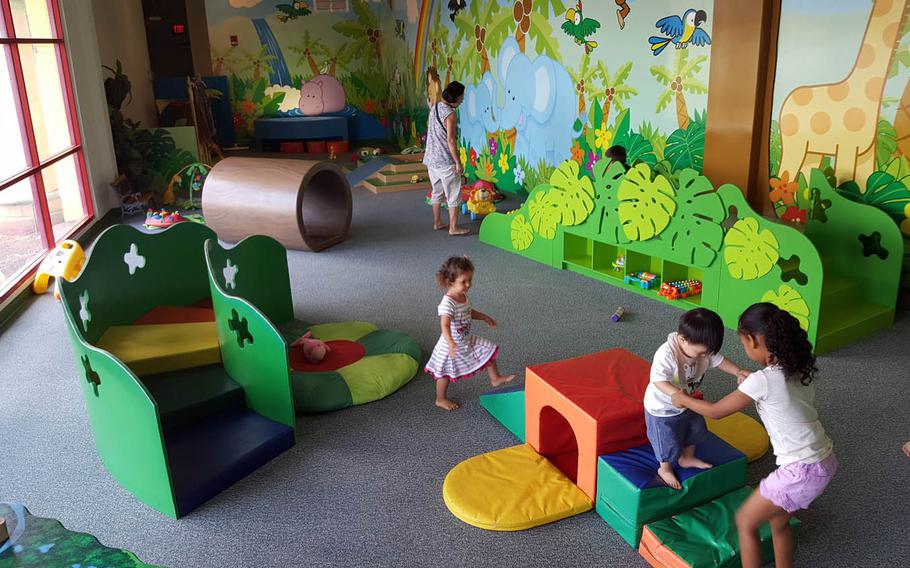 Buy Photo
The playground in the "Rainforest Adventures" exhibit at the Hawaii Children's Discovery Center lets kids climb, jump and romp till they drop. (Wyatt Olson/Stars and Stripes) 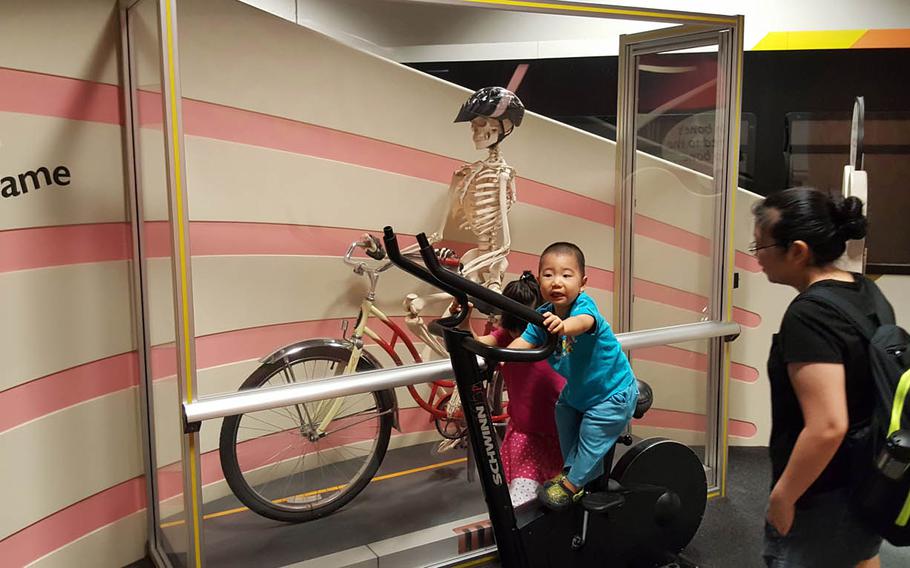 Buy Photo
A visitor at the Hawaii Children's Discovery Center in Honolulu pedals beside a skeletal workout partner at one of the "Fantastic You" interactive displays that help kids understand how the human body works. (Wyatt Olson/Stars and Stripes)

Let’s from the get-go concede one problem with Hawaii Children’s Discovery Center: It’s hard to get a kid to leave this prepubescent paradise. And the center’s short operating hours on the weekend — five hours a day — only add to the time crunch for the little ones. Even on a longer day, though, the average kid probably wouldn’t make it through the 38,000 square feet packed with interactive exhibits that range from high-tech displays to backyard-treehouse joy. This place is neither playground nor museum but borrows from both in its quest to teach kids a little something as they’re having fun. Some of the most engaging “exhibits” are simply miniaturized, interactive versions of the adult world, which the center dubs “Your Town.” One is the Feel Finer Diner, a replica of a good old-fashioned American grill. Here kids can don aprons and chef hats, sling hash and serve customers — those would be parents dutifully seated at a row of stools — and then clean up the mess in the faux dishwasher. You might not be able to get your kids to lug so much as a dirty spoon to the sink, but put the tykes in charge here and they scurry around like Julia Child in the wind. Same goes for a miniature grocery store, where kids can either shop the product-filled shelves or pose as checkout clerks scanning barcodes. There’s also a post office, bank, fire hall, doctor’s office and veterinary clinic, all of which encourage role playing with far more props than the average home toy box would hold. Youngsters can stage their own play in a theater stocked with costumes and props. The “Fantastic You” exhibits are more instructive, but still more fun than educational. One large kiosk is modeled after the human digestive tract, and kids can make their way through it like morsels of food. Such a “Fantastic Voyage” might not sound too appealing to an adult, but for the average kid, it’s “large intestine, here I come.” An exhibit on the human heart and lungs shows how heart valves work to pump blood through the entire body. Elsewhere, kids can ride a stationary bike parked next to a full-size skeleton astride its own bicycle. The center’s newest exhibit, “Rainforest Adventures,” is the closest thing to a playground here — but its intent is still to educate. Actual water runs through an elaborate rainforest “river,” showing how it all begins with rainfall — yes, there are buttons to push to make several clouds rain — and ends as the river pours into the ocean. Kids can stand beside the stream and fish for river creatures using magnetic fishing poles. There’s a fair amount of splashing here, but waterproof smocks are available. Next to the stream is a play area designed to highlight some of the habitats of rainforest animals. It lets kids crawl through tunnels, climb over logs, play with animal figurines and let loose the general mayhem every parent comes to expect at a playground. The center, however, is ultimately a relaxing place for parents because kids do all the “work,” and they’re doing it in a safe place with a lot of like-minded children. Your work will begin when you utter the dread words, “It’s time to leave.” olson.wyatt@stripes.com

The Hawaii Children’s Discovery Center DIRECTIONS 111 Ohe St., Honolulu. From Waikiki Beach, take Ala Moana Boulevard and turn left onto Cooke Street heading toward the ocean. Cooke leads to a parking lot across the street from the center, which is a very large building next to Kakaako Waterfront Park. TIMES 9 a.m. to 1 p.m., Tuesday through Friday; 10 a.m. to 3 p.m., Saturday and Sunday; closed Mondays, Easter, Thanksgiving, Christmas Day, New Year’s Day and all Monday holidays. Also closed Sept. 4-11 this year for general maintenance. COSTS General admission, $12; with military ID, $10; ages 62 and older, $7; children younger than 1, free. FOOD Deli-style cafe offers snacks, beverages and meals. INFORMATION 808-524-5437; www.discoverycenterhawaii.org NOTE Strollers are not allowed in the center’s exhibit area; stroller parking is available in the lobby. Children must be accompanied by an adult.