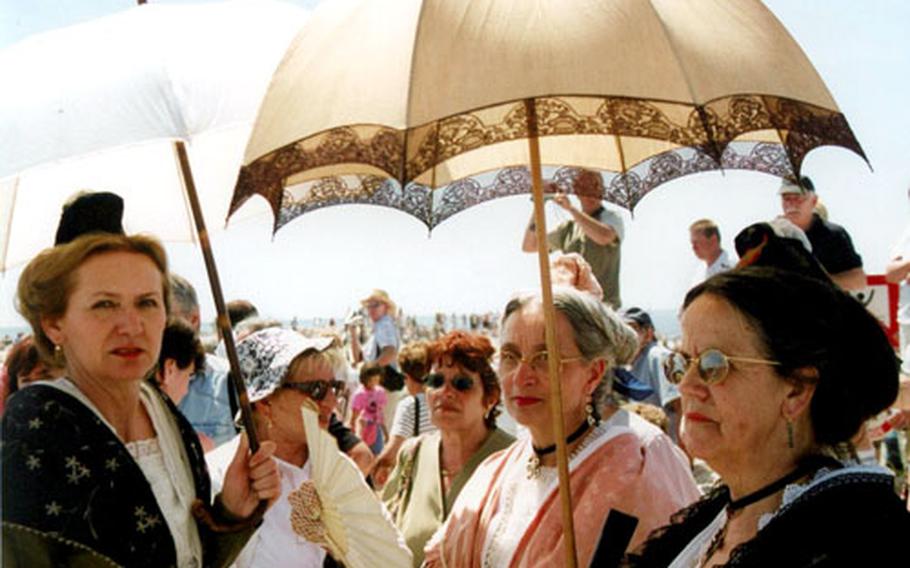 Joining the parade for the festival are the Arlesiennes, women wearing the traditional costume of the area, complete with parasols. (Leah Larkin / Special to S&S)

Joining the parade for the festival are the Arlesiennes, women wearing the traditional costume of the area, complete with parasols. (Leah Larkin / Special to S&S) 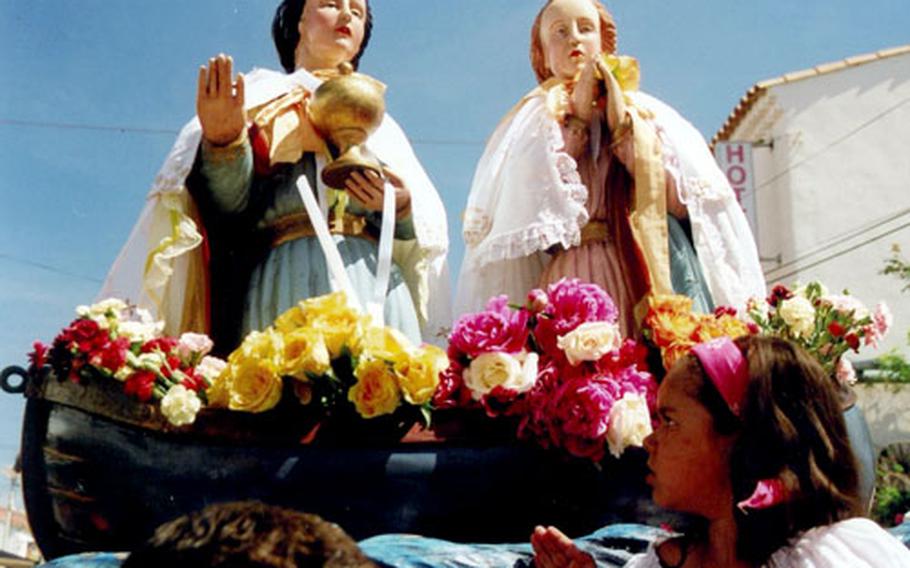 May 25 is the day to honor the “Maries,” Mary Jacobe and Mary Salome, whose statues are carried through the town in a parade. (Leah Larkin / Special to S&S) 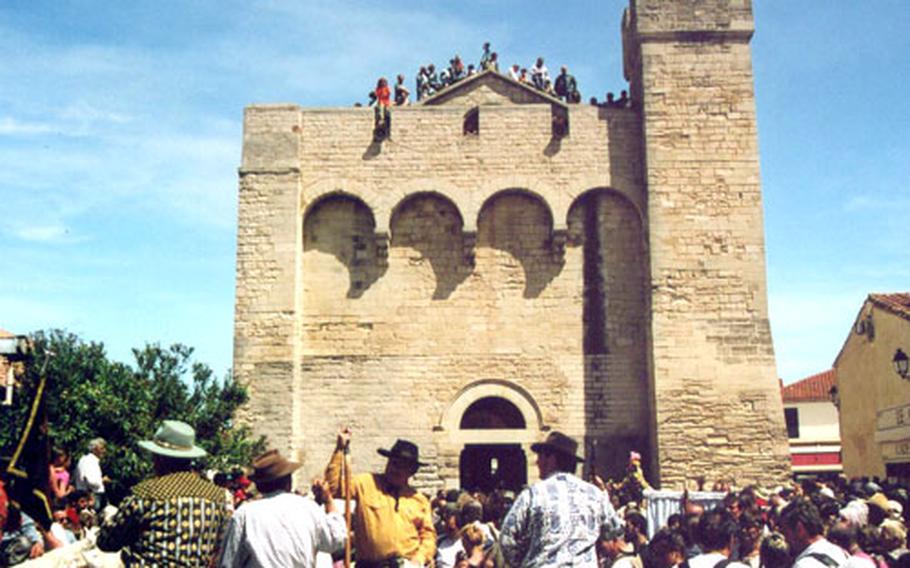 Crowds gather around the Notre Dame de la Mer church, and even on the church’s rooftop, waiting for the statue of St. Sara to appear. (Leah Larkin / Special to S&S) 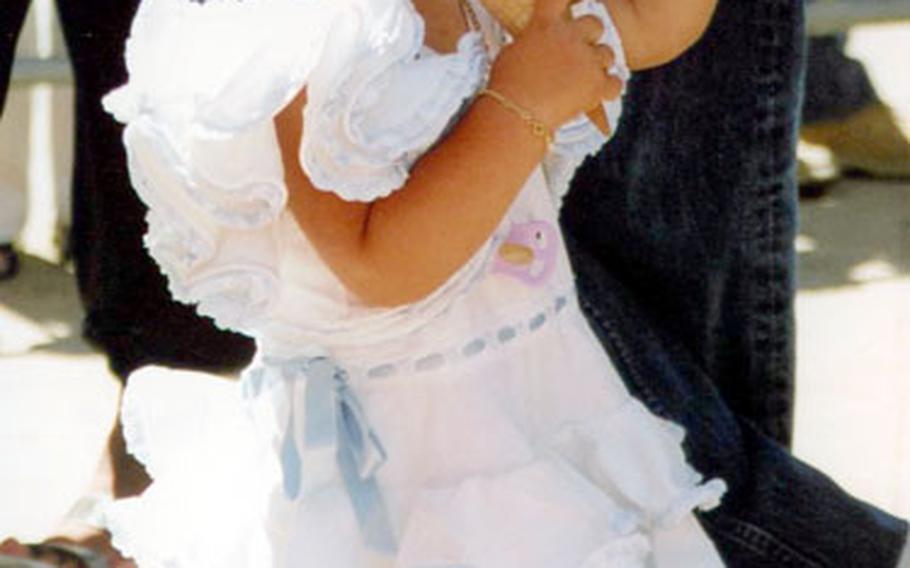 For this parade participant, ice cream might have been as interesting as St. Sara. (Leah Larkin / Special to S&S) 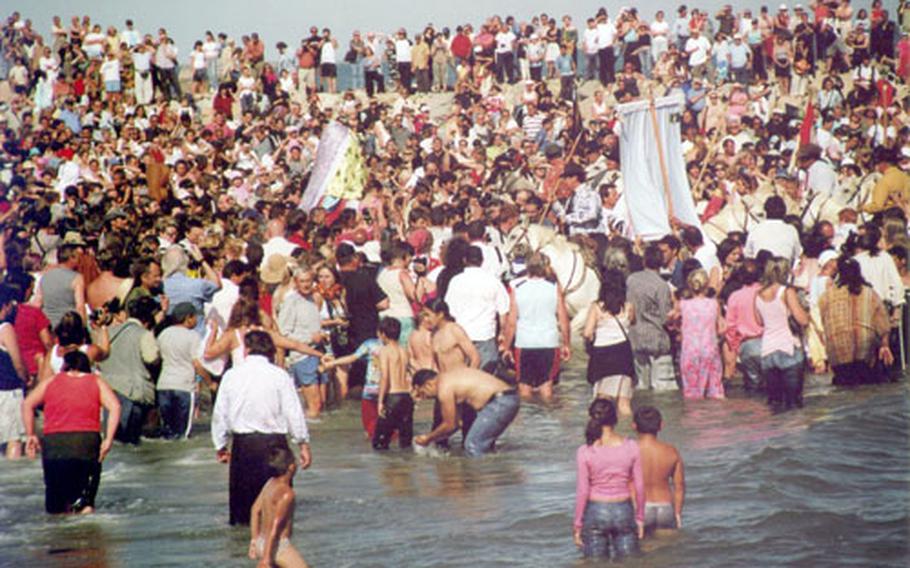 Festival goers gather at the beach and wait for the statue to be paraded into the water. (Leah Larkin / Special to S&S)

Between chants, followers sing sacred songs as they make their way through narrow streets to the sea. Visitors are given song sheets with words so they can join in this curious Gypsy ritual, a blend of religion and revelry.

The procession of St. Sara, the patron saint of Gypsies, takes place every May 24 as part of the pilgrimage festival in her honor in Saintes-Maries-de-la-Mer, a beach town in southern France&#8217;s Camargue region.

The Camargue, a vast wetlands delta, is known for its rice paddies and salt production, pink flamingos and white horses &#8212; and its saints. Last year, about 25,000 Gypsies and visitors converged on Saintes-Maries-de-la-Mer for the religious event that is part of a two-day festival, with May 25 reserved for honoring the &#8220;Maries&#8221; &#8212; Mary Jacobe and Mary Salome &#8212; for whom the town is named.

No one knows the exact origins of St. Sara. According to one theory, she was the servant of Mary Jacobe, the sister of the Virgin, and Mary Salome, the mother of the apostles James Major and John. The Marys, accompanied by other refugees who were escaping religious persecution, set sail from Jerusalem in the year 40 in a boat without sail, oars or supplies. Sara, left behind, cried out and one of the Marys threw her coat onto the water. Sara stepped onto the coat, which bore her to the boat.

The group drifted at sea until it reached the shore of the Camargue, where it built a small oratory. Sara is said to have traveled through the Camargue begging for alms for a small Christian community, which is why early writers called her a gitane, or Gypsy.

Sara and the two Marys were buried in the oratory, and their tomb has been a pilgrimage attraction for 19 centuries.

&#8220;Saint Sara helps us, blesses us, protects us,&#8221; said Marie Offman, a Gypsy from Clermont Ferand in Belgium. She and her husband, three children and dog made the pilgrimage last year in the family camper and had claimed a spot in one of the parking lots surrounding the town. They joined others who had settled in to worship, socialize and sing during the festival.

The focus of the celebration is the Notre Dame de la Mer, a fortified church that in the ninth century replaced the oratory where the women were buried. Worshippers pack a dingy, underground crypt that holds a small, but revered statue of St. Sara. The Catholic Church does not recognize Sara as a saint, hence the statue is not permitted to touch holy ground and must remain underneath the church.

Pilgrims wait in line to stoop down into the crypt, where thousands of candles burn around the statue, its tiny black face peering above the layers of cloaks draping her body. According to some theories, Sara was Egyptian, which explains why she is depicted with black skin. The devotees reach out to touch her, to kiss her. They leave behind papers on which they&#8217;ve written their petitions. Some even break down and cry at the sight of Sara.

On her name day, May 24, the Sara statue is taken from the crypt and is permitted to enter the church where a Mass is held before the religious parade begins. The church can&#8217;t accommodate the crowds, so many gather outside, even on the church roof, waiting, some for as long as three hours for their chance to see the statue and follow it through town. The atmosphere is more party than holy, as if a rock star were about to appear.

The crowd is pushed back to make room for the &#8220;gardians,&#8221; cowboys wearing black hats and carrying long staffs. They arrive on white Camargue horses to guard the curious effigy as it emerges from the church. The crowd cheers and shouts, pushes and shoves, almost in a frenzy. Everyone wants to get closer.

Slowly the gardians clear a path and lead Sara, followed by throngs of fans, to the seashore where she is carried into the water. The beach is a mass of humanity, all straining for views of the pageant. It&#8217;s as if they expect something miraculous to happen. Many even follow the statue into the sea. But her foray into the water is brief, and she then is paraded back to her underground home.

I had read that in the evening after the procession, the Gypsies gather in the streets to play violins and guitars and sing and dance. Last year, however, I saw only a few guitarists. One played as two young girls pathetically attempted a sexy dance. Groups of young people hung around.

Lorraine Rawls, an Oregon woman who said she was doing research on the gardians, told me that every night during the festival there are murders as rival Gypsy gangs battle. A tourist office spokesperson acknowledged that there are fights, but said there were no murders. I saw no violence.

Following Sara&#8217;s festival day is the day to honor the Marys. There is also a procession leading the two statues to the water with the same fervor and fever of the preceding day. In addition to the gardians flanking the icons, the Marys are followed by Arlesiennes, women wearing the traditional costume of the area, many carrying parasols.

Know and go ...Saintes-Maries-de-la-Mer is at the western end of Camargue in southern France about 20 miles south of Arles. More information on the town and the Gypsy festival at www.saintesmaries.com.

Where to eat: L&#8217;Amiraute is a pleasant eatery at the port with three-course menus at 19.50 euros. La Table des Beaumelles is about six miles from town in Les Cabanes du Camdon, offering three-course menus from 15 to 25 euros. Hostellerie du Pont de Gau is on the route from Arles about three miles from town next to the Ornithological Park; menus range from 20 euros (two courses) to 50 euros (three courses).

The Ornithological Park is about three miles from town on the route to Arles and features a natural landscape surrounding ponds where numerous birds, including flamingos, make their home. Open 9 a.m. until sunset daily. Admission: 6.50 euros for adults; 4 euros for children ages 4 through 10. For details, see www.parcornithologique.com.