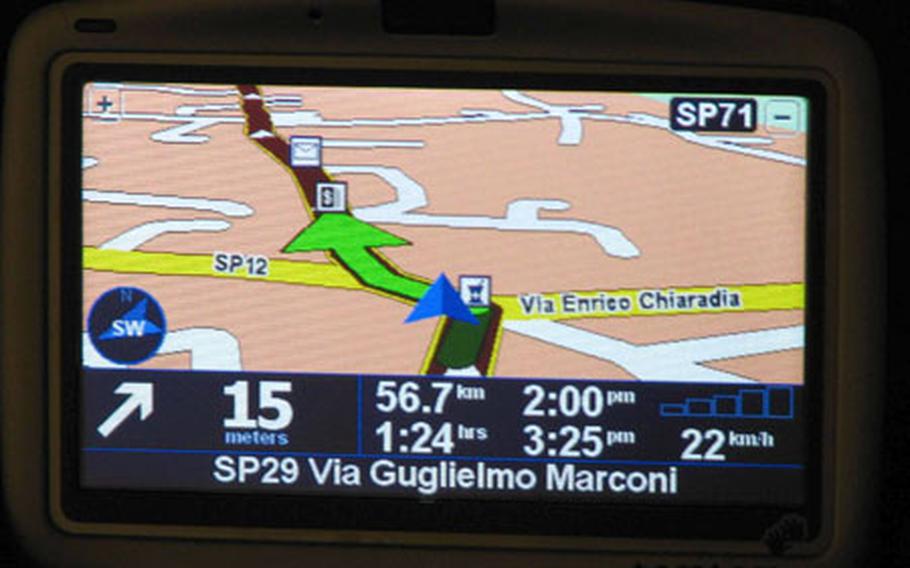 The display screen of a GPS unit shows your moving position on a map, along with your speed, distance to destination, and estimated arrival time. A portable unit can also be removed from the car and be used to help you find your destination on foot. (Mary Kieran / S&S)

The display screen of a GPS unit shows your moving position on a map, along with your speed, distance to destination, and estimated arrival time. A portable unit can also be removed from the car and be used to help you find your destination on foot. (Mary Kieran / S&S) 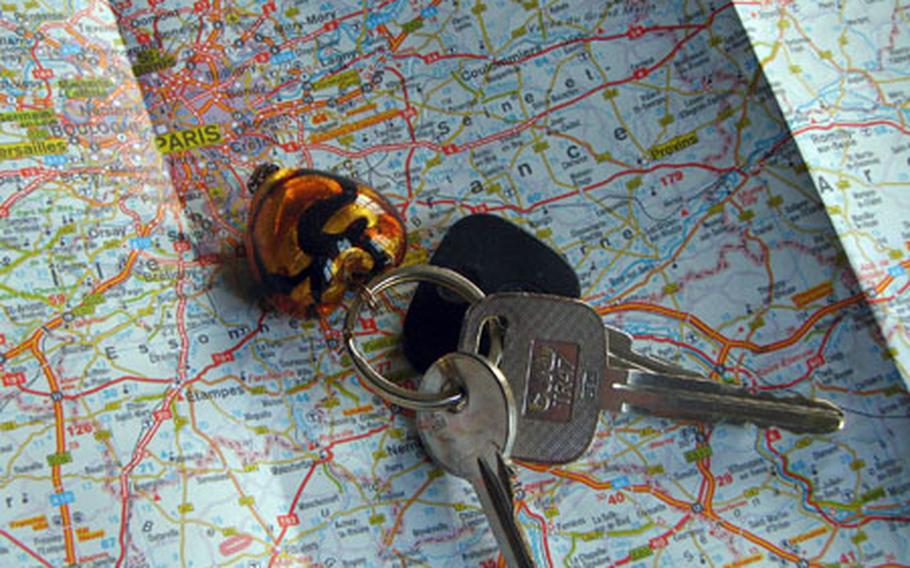 Know the general route you are taking and the major roads you will be using by consulting a road map ahead of time. (Mary Kieran / S&S) 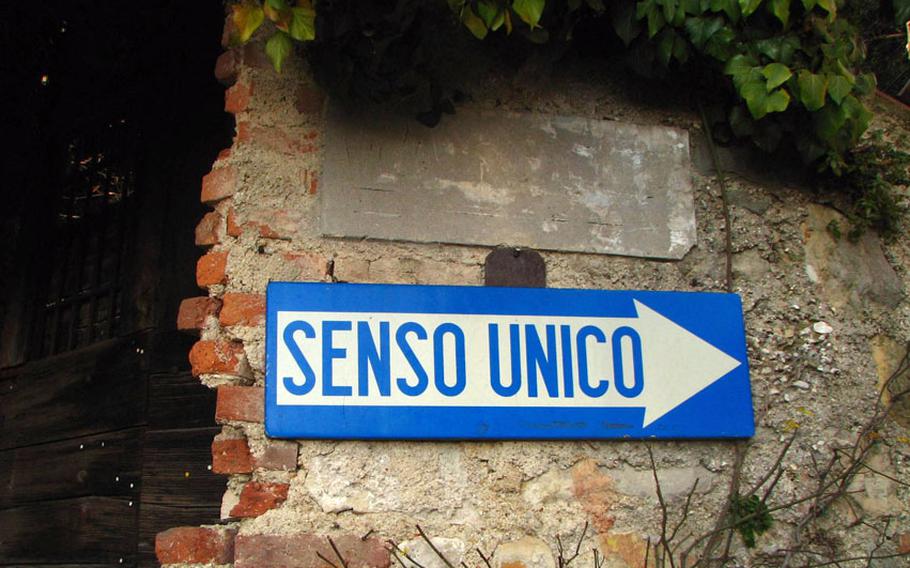 One-way streets, do not enter signs, and pedestrian-only streets no longer instill the same fears while driving for a GPS user, as they do for those without one. (Mary Kieran / S&S)

A global positioning system unit can give you confidence driving in an unfamiliar area one minute and a nervous breakdown the next.

I recently took several trips with two different GPS units, and while I enjoyed using them I have a word of advice: Don&#8217;t throw away your road map just yet.

GPS units for the car offer a slew of features that can reduce the stress of navigating new terrain.

A display screen shows your position on a map, and voice commands politely tell you when and where to turn. The screen gives calculated speed, distance and driving time, automatically recalculating after a wrong turn or detour.

Units also have listings of nearby sites including hotels, service stations and tourist offices, plus the ability to upload pictures and music, making these mini-computers great travel companions.

They can also make driving in heavy city traffic a breeze.

On our first visit to Dresden, Germany, my husband and I were able to exit the freeway and drive directly to our hotel following instructions from our GPS unit. One-way streets, do-not- enter signs and pedestrian-only areas in a strange city no longer caused lost time and sweaty palms.

For ease of locating our hotel, we combined our GPS with Google Earth on our home computer. Before we left, we pinpointed the hotel location in Dresden. We used Google Earth to zoom in on it and make a satellite picture of what the hotel looked like. When we arrived, we recognized our hotel from the picture and knew exactly where to find the parking lot.

A GPS unit can also help you when you are out of the car. Ours can be detached from its holder and slipped into a pocket or purse. Pull it out when you need help finding something as you walk &#8212; or to get back to where you started.

For instance, how hard can it be to find your parked car in a small town on the Italian Riviera when it is parked right next to the sea? A lot harder than you think, believe me.

After walking from one end of the San Remo marina to the other and back again looking for my car in the dark, I was forced to admit defeat. Too exhausted to keep tramping about, I flagged down the next passing polizia car and asked for help.

They eventually took pity on me and put me in the back of their car and drove me back to the main road. We went down the coast a few blocks to the next parking area where my car sat waiting for me.

This grief could have been avoided if I had used my GPS unit. I could have marked the position of my car when I parked it, and then tucked the portable unit into my purse. Later, the tracking device would have pulled up a map showing which streets to take back to the parked car. At the end of the day, you can save your tired feet and have your GPS show you the shortest way back to your car.

A GPS unit does not always have the most up-to-date information about road conditions and businesses. One time we stopped just short of driving onto a bike lane, when our GPS told us to continue straight ahead.

Another time we left the freeway under GPS direction to find a particular name-brand service station, where we needed to buy gasoline. When we got there 20 minutes later, we found that the station had changed names and we had to start looking all over again.

One day we were climbing a steep road with switchbacks on our way up to the mountain village of Asiago, Italy. The voice on our GPS unit kept cheerfully telling us, &#8220;Turn around when possible,&#8221; because it thought we were going the opposite direction each time we made a hairpin turn. We used our road map and common sense to confirm that we were on the right road, and then turned off the GPS unit to finish our drive to Asiago in peace.

Always take any instruction from your GPS unit as a suggestion. Know the general route you are taking and the major roads you will be using by consulting a road map ahead of time. That way you can be prepared for anything jiggy that your GPS might try to slip over on you.

Once, after coming down a mountain road from a vista point, my GPS unit said to take a right turn. I remembered that a left turn would return me to the main road. Thinking the right turn might take me to the main road in less time, I followed the GPS command against my better judgment.

The paved road narrowed and turned to gravel. Well, this won&#8217;t be too bad, I thought, if I come out on the main road soon. Forty minutes and some 200 potholes later, I did reach the main road, but not before my confidence in my GPS unit had been severely shaken, along with all the fillings in my teeth.

I have learned to exercise common sense when using a GPS unit to avoid some of the more goofy things it might suggest.

For example, I know my GPS likes to try to slip in an incorrect right turn, when about six blocks from my house.

If it thinks I am dumb enough to fall for a wrong direction so close to home, it isn&#8217;t really that clever after all.

Mary Kieran is a freelance writer living in Italy. Write her at wordsforsale@ hotmail.com.

Know and go ...GPS units in individual cars are receivers that pick up signals from the Global Positioning System satellites orbiting above the Earth. They can be used to track the car&#8217;s movement and its position relative to other objects, such as your destination.

Drivers can program specific start and finish addresses into the unit, or select from a list of sites, and receive voice directions to get from one to the other.

Our unit is a TomTom. It is a portable receiver that is attached to the car&#8217;s windshield and draws power from the cigarette lighter or a battery. It has a 3-by-4-inch screen mounted on a base and can be removed from the car. The unit fits in the palm of your hand and can be slipped into a purse or pocket for easy transportation and finding lost cars later.

More information about GPS units, including different brands and model reviews, features, prices, list of books, videos and DVDs and customer ratings are at: http://gpsinformation.net/ and www.gps4fun.com/main.

Find out about Google Earth&#8217;s free services with its satellite imagery, maps, driving directions and views of 3D terrain and buildings at http://earth.google.com.