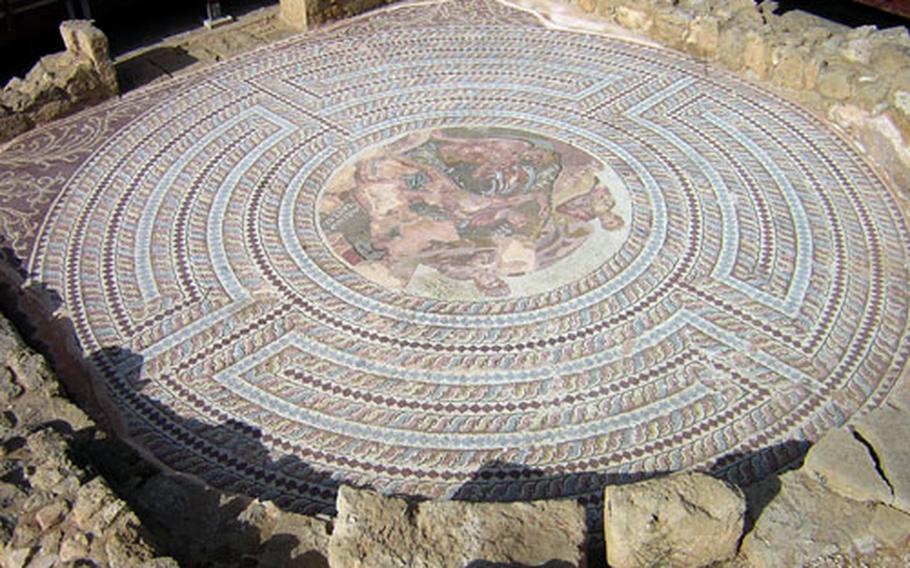 The large mosaic in the Villa of Theseus shows Theseus fighting the Minotaur, and is well preserved, especially in its outer border. Most mosaics are best seen after a light rain or sprinkling of water brings out the colors. (John Taylor / S&S)

The large mosaic in the Villa of Theseus shows Theseus fighting the Minotaur, and is well preserved, especially in its outer border. Most mosaics are best seen after a light rain or sprinkling of water brings out the colors. (John Taylor / S&S) 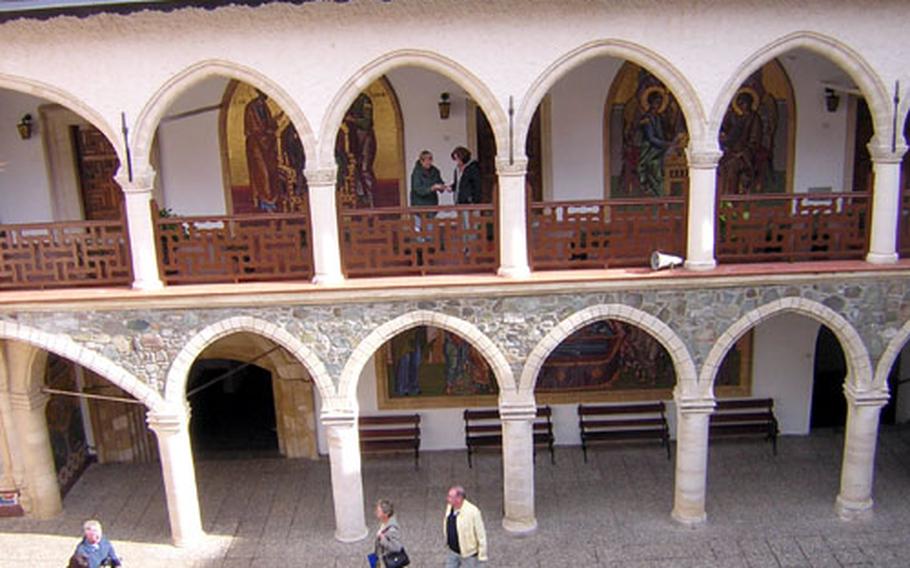 The Kykkos Monastery is a grand structure with paintings, frescoes, statues and other treasures available for the public to see. (John Taylor / S&S) 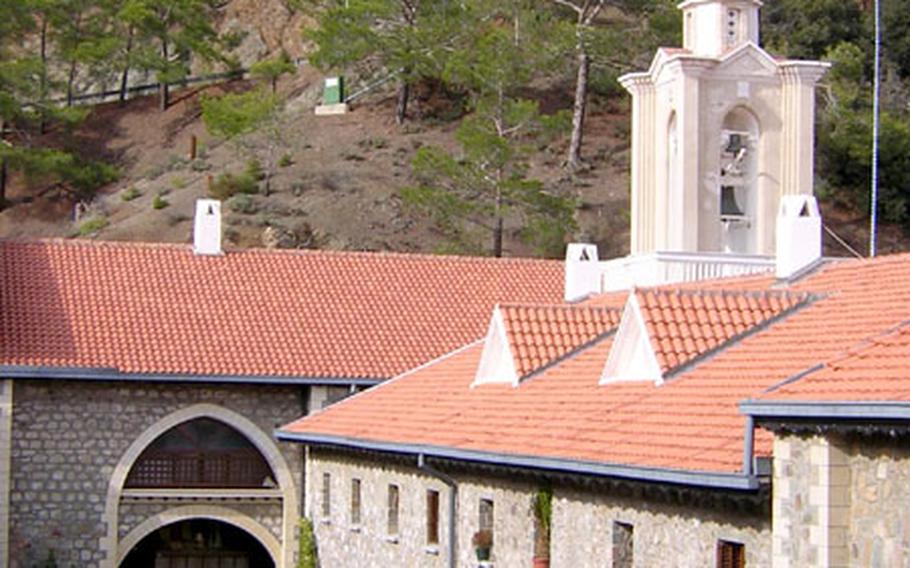 Kykkos Monastery is in the Troödos Mountains, where the temperatures are lower than along the coast. (John Taylor / S&S) 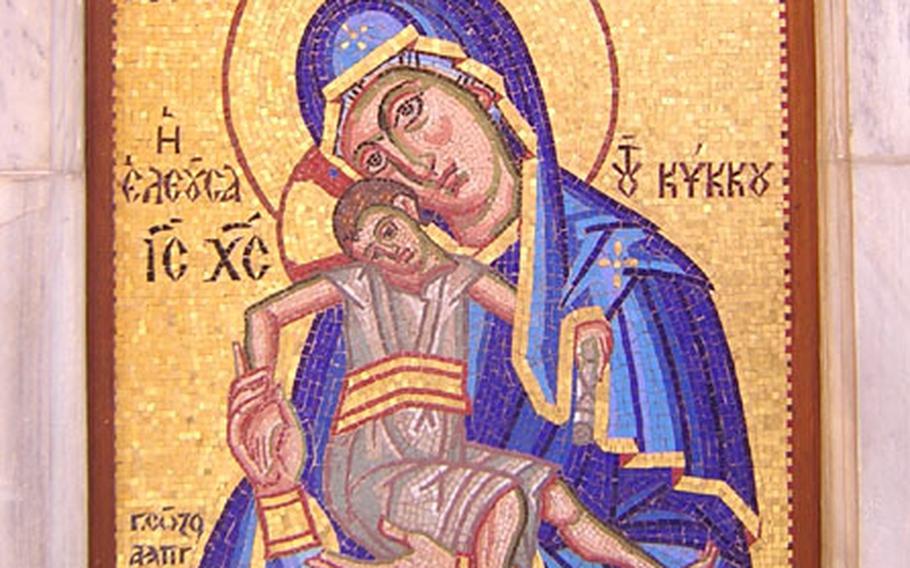 A mosaic at the Kykkos Monastery is a copy of the icon of the Virgin Mary, which the monastery was built to hold. The original is stored away safely, but supplicants still touch the copy in hopes of having their wishes granted. (John Taylor / S&S) 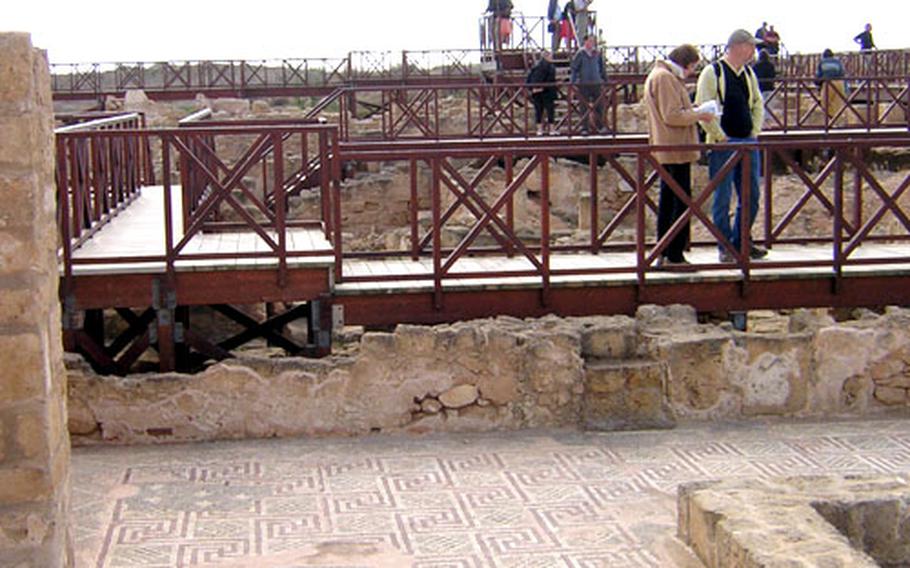 Wooden walkways take visitors over and around the extensive mosaics found in the ruins of the Roman Villa of Theseus. (John Taylor / S&S)

At one time, Paphos was the most important town on Cyprus. It was a sprawling settlement, circled by walls and known as Nea Pafos, or New Pafos &mdash; old Pafos, home to the Sanctuary of Aphrodite, was several miles away. It became the island&rsquo;s center of political and economic power.

Founded in the fourth century B.C., the town was part of the Ptolemies&rsquo; dynasty, which ruled the region from its base in Alexandria, now in Egypt. Later it was given to the Romans, who built opulent villas there and gave the current town its greatest attraction.

The mosaics of Pafos, found inside the villas, were believed to have been created in the second and third centuries. An earthquake in the fourth century began the town&rsquo;s decline and enemy raids continued it. Power shifted to other cities and much of the city&rsquo;s glories disappeared.

Then in 1962, a farmer working in fields near Paphos uncovered one of the old mosaics. Officials were called and archaeologists from Poland and Cyprus began digging around the site. What they discovered led to Nea Pafos becoming a part of the World Cultural Heritage List of UNESCO in 1981.

So far, archaeologists have uncovered the ruins of at least three villas with magnificent mosaics. The mosaics are depictions of mythological characters, scenes from everyday life and elaborate geometric designs, all made from small colored stones. They served as both the floors and decorations in the grand Roman villas.

One of the most impressive mosaics is at the Villa of Theseus. It is a large circular scene of Theseus and the minotaur that is missing a few stones in the center but has its detailed and intricate border nearly intact. This and other mosaics in the former villa are uncovered, crisscrossed by raised walks and borders so visitors can get a good view. The area was so large that some of the lesser mosaics are left unprotected, and visitors actually walk on them.

It is said the mosaics are best seen after a light shower or with water sprinkled on them to bring out the color. We saw them under an overcast but dry sky and were still impressed, but would have loved to see them shine.

A second cluster of mosaics is at the House of Orphesus, which is still under work. Its centerpiece is a scene of Orphesus playing his lyre for the animals surrounding him, their coats and muscles shown in exacting detail.

The House of Dionysus has been enclosed by walls and a roof and contains the largest collections of mosaics. It is named after a scene in the main room that shows Dionysus with Icarus, but other well-preserved mosaics include scenes from nature, portraits of humans and close-ups of animals, including a peacock in all its glory.

There is more to Nea Pafos than its mosaics. It also includes the ruins of a Roman agora and a theater, rebuilt in the 1970s. And about two miles away is an underground network of burial chambers that may be just as impressive as the mosaics.

The site is called the Tombs of the Kings, although it is doubtful kings were buried there. Archaeologists believe they probably were used to bury wealthy citizens during the time the city was part of the Ptolemies&rsquo; dynasty.

The personal items that it was believed the dead were buried with are long gone, but the burial chambers themselves are a treasure. They are cut into the hills and rocks overlooking a quiet bay. Some hold interconnected passageways with hollowed-out niches where the bodies were entombed. Many of the winding passages dead-end into rock, but others can be followed from end to end, twisting into others in a subterranean maze.

And while some are simple openings, others are grand entrances with carefully cut steps leading into open areas supported by columns and arches. Ancient Egyptians believed tombs for the dead should resemble houses for the living, and historians say the underground monuments copy the architectural style of Alexandria at the time, complete with a central atrium and carved facades that mimic a temple.

The fenced-in burial ground is extensive and bumps up against modern hotels and a busy street. It is possible there are more tombs still to be discovered.

&bull; The Pafos mosaics are open daily except Christmas, New Year&rsquo;s Day and Easter. Hours are 8 a.m. to 5 p.m. October through March, 8 a.m. to 6 p.m. April, May and September, and 8 a.m. to 7:30 p.m. June through August. Admission is 1.50 Cyprus pounds (about $3.40); there is no charge on Sundays for European Union citizens and, at least until the spring, everybody else. Allow at least two hours to see the mosaics, more if you want to see the ruins.