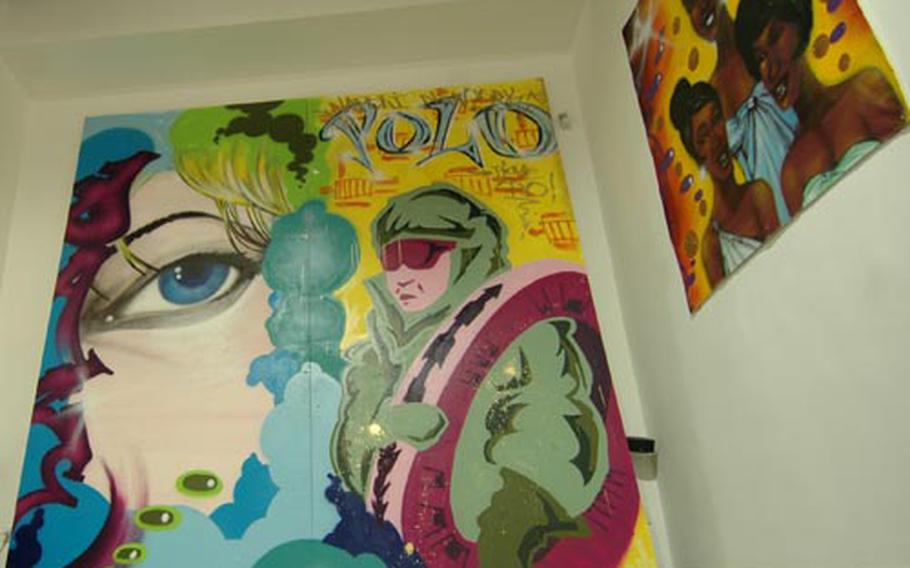 A collaboration between New York City artist Daze and Naples artist Polo is on display as part of the “South Bronx to Naples” art display at the Entropy Art In Progress gallery in downtown Naples. To the right is another Daze work titled “Martha Reeves and the Vandellas.” ()

From inner-city ghettos to upscale galleries, works by noted graffiti artists have been in high demand over the years. Some, such as British artist Banksy, command tens of thousands of dollars at international auction houses. Euphemistically referred to as "outdoor art," graffiti is more fashionable than ever.

New York City artist Daze, whose works have been exhibited in Paris, Stockholm, Tokyo, Florence and many other cities around the world, is the subject of a current display at the Entropy Art In Progress gallery in downtown Naples, titled "South Bronx to Naples."

"I was able to create works and then send them out into the city through the intricate veins of New York&#8217;s transit system," he said in an article he wrote for the opening of his works in the Naples gallery.

"I can&#8217;t think of any other art form that had given its practitioners work immediate exposure to an entire city. Some saw it as a sign that the city had &#8216;lost control.&#8217; Others however realized that this was the ultimate statement in artistic freedom."

The exhibit consists of about 15 pieces of original artwork, along with a wall of photos depicting Daze in action during the 1980s. The photos show him painting on the subway cars, and his work rolling through the city.

One of the pieces on display was a collaboration painted by Daze and Naples graffiti artist Polo, who founded the Neapolitan Graffiti Crew and leads the Naples hip-hop group La Famiglia.

The two teamed up for both an indoor and outdoor (just outside the gallery) mural on Nov. 4, the day of the opening.

Despite the name of the exhibition, gallery manager Mauro Filomarino says comparisons of the Bronx and Naples may not be entirely accurate.

"Naples has some areas like the Bronx, like Scampia and Secondigliano," Filomarino said. "It&#8217;s a neighborhood that was born out of our imagination, our fantasy."

The fantasy is no doubt fed by music and film, but isn&#8217;t entirely misleading. The neighborhood of Scampia for example, served as the set for the film "Gomorrah," about the inner workings of the Neaopolitan mafia.

The Daze exhibition runs through the end of November, and is open to the public. The Entropy Art gallery is located at the top (up the two flights of stairs) of Via San Pasquale, 53, off Riviera di Chiaia.

A peek into the artist&#8217;s creative side

Graffiti might be considered an eyesore to some, but for others it is one of the truest expressions of art. While some view this as anti-social behavior, some in the art community consider it an artistic movement and cultural phenomena.

Translation: "I think it&#8217;s very difficult for the average person to distinguish between thecreative side and the destructive one."