Frankfurt: A cruise along the Main offers magnificent views of the city 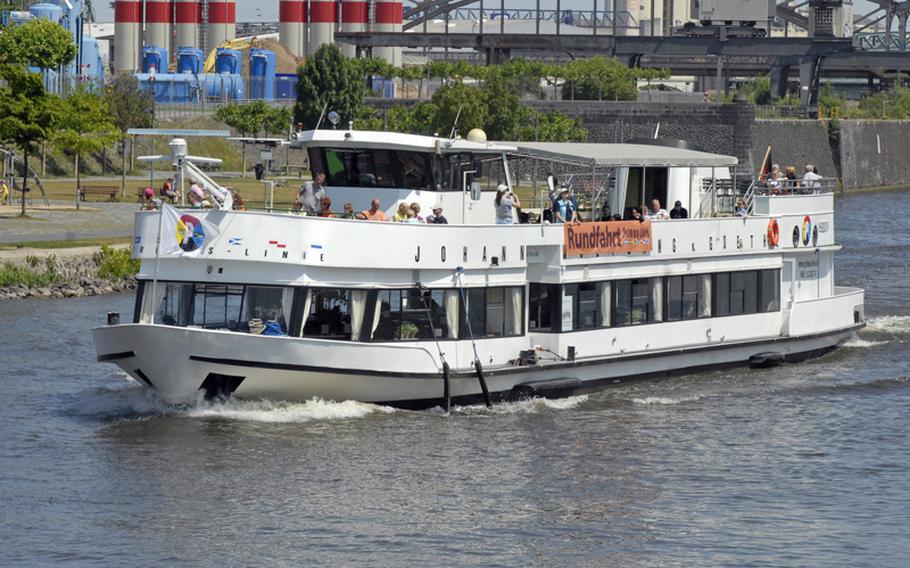 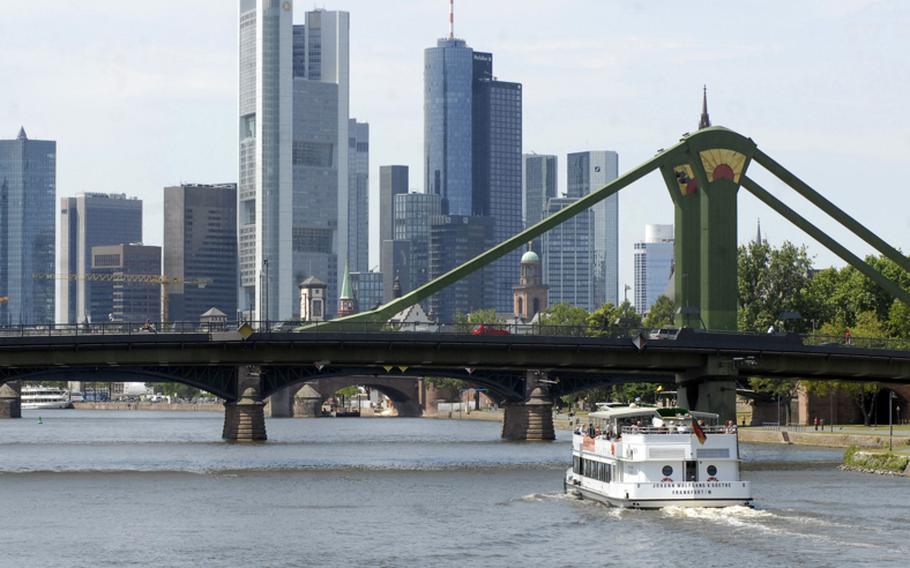 Buy Photo
The Primus-Linie cruiser Johann Wolfgang Von Goethe, named after the German writer born in Frankfurt am Main, completes a Main River tour of Frankfurt and heads back with an impressive view of the Frankfurt skyline. (Mark Patton/Stars and Stripes) 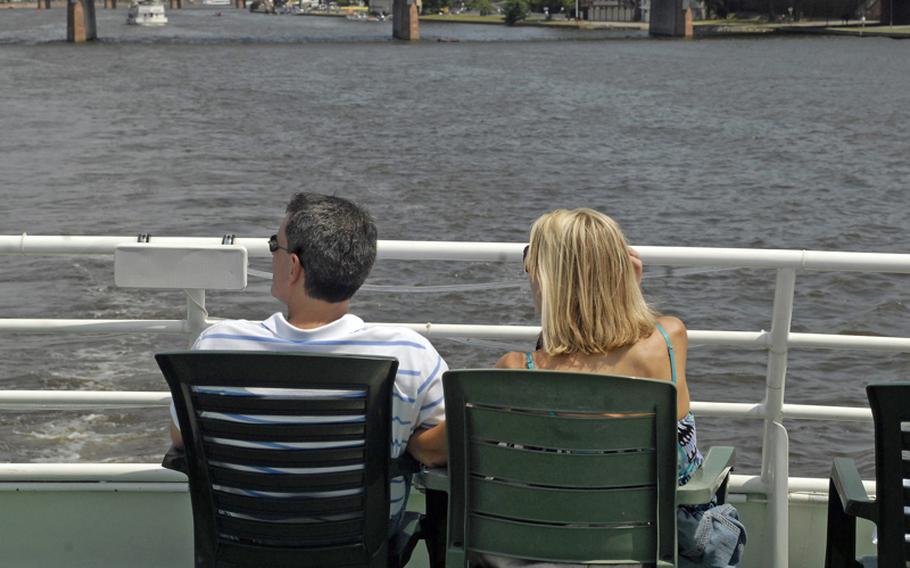 Buy Photo
A couple relaxes on the sun deck of the cruiser Nautilus as it glides on the Main River. The Nautilus features three decks with 380 indoor seats and 200 seats on the sun deck. (Mark Patton/Stars and Stripes) 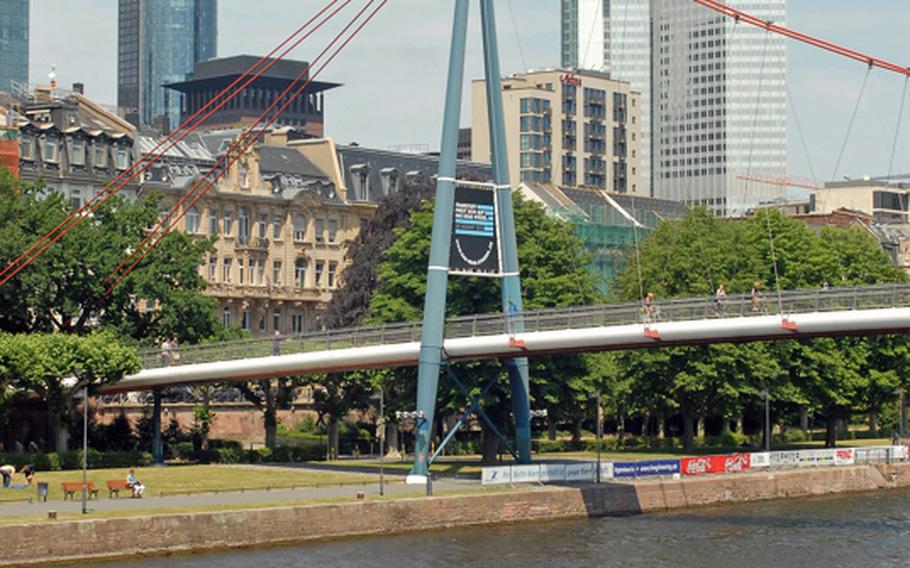 Buy Photo
A pedestrian bridge crosses the Main River with Frankfurt&#39;s financial district in the background. (Mark Patton/Stars and Stripes) 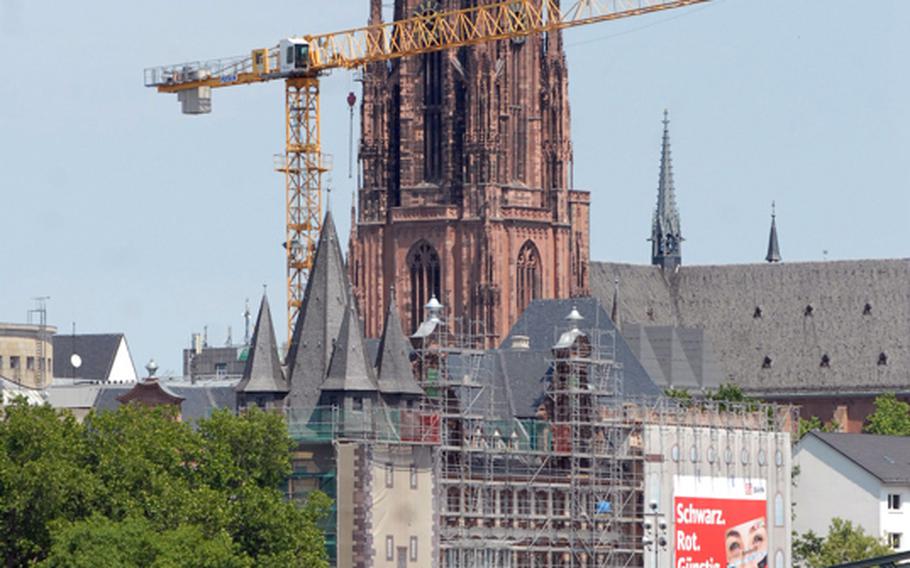 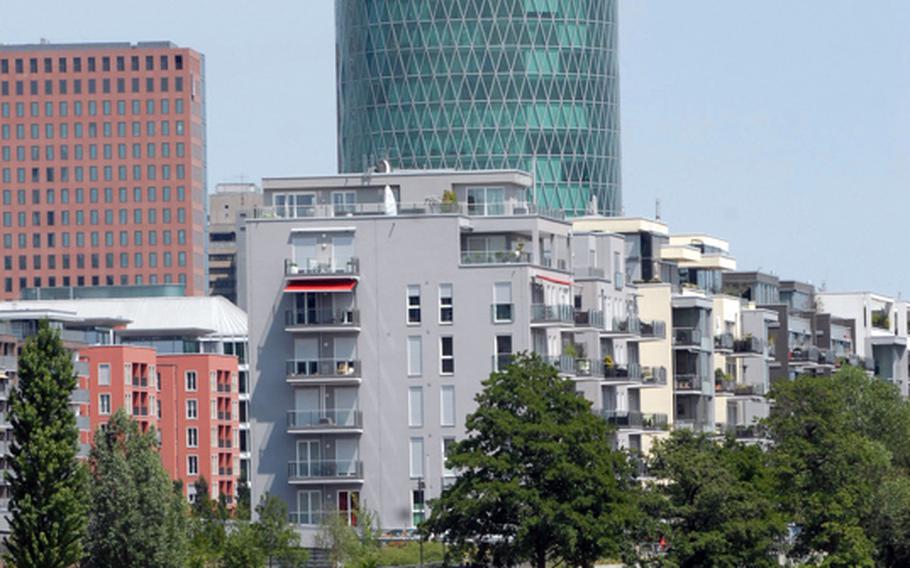 Buy Photo
A building dubbed by residents as "the world&#39;s tallest apple-wine glass" towers above the banks of the Main River in Frankfurt. Apple wine is a drink with roots in the region and is a popular summertime choice for city residents. (Mark Patton/Stars and Stripes) 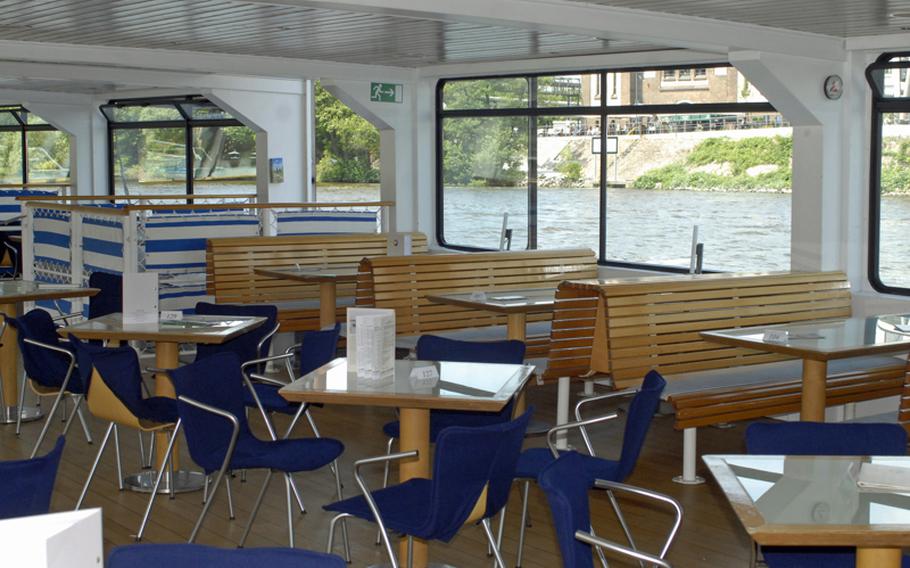 Buy Photo
On a warm spring day, the indoor seats of the Primus-Linie cruiser Nautilus remain empty as the ship cruises the Main River in Frankfurt. (Mark Patton/Stars and Stripes) 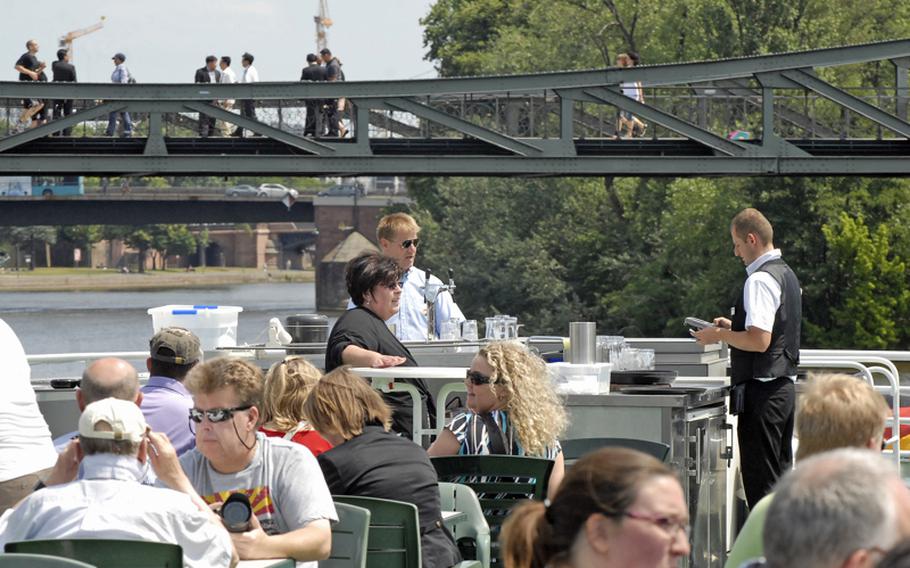 Buy Photo
Guests sip drinks and take in the sights of Frankfurt from the sun deck on a Main River cruise. (Mark Patton/Stars and Stripes) Buy Photo
For nautical lovers, spotting personal and industrial ships is part of the fun during a Main River cruise. (Mark Patton/Stars and Stripes) 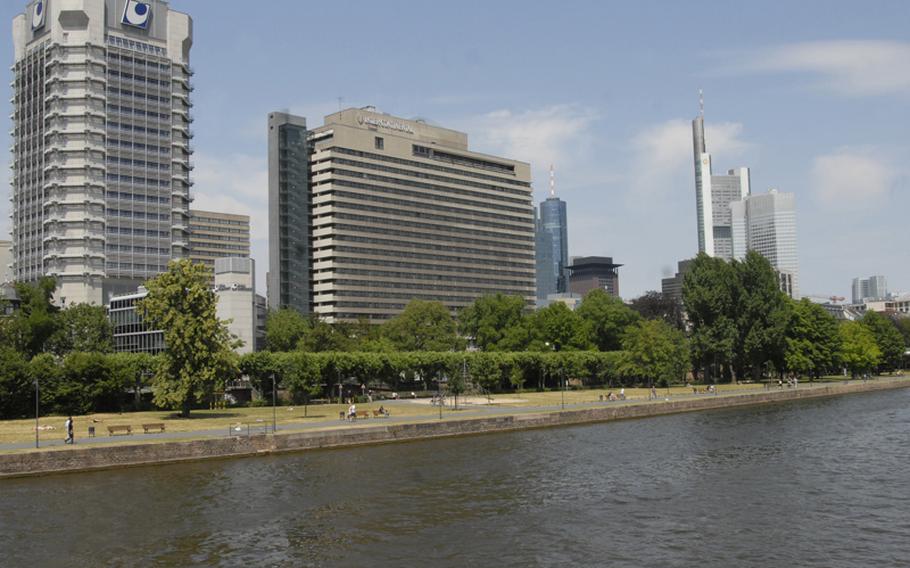 Buy Photo
The Nautilus cruises past Frankfurt&#39;s financial district. Many upscale parks, apartments and local boat clubs line the banks of the Main River in this part of the city. (Mark Patton/Stars and Stripes) 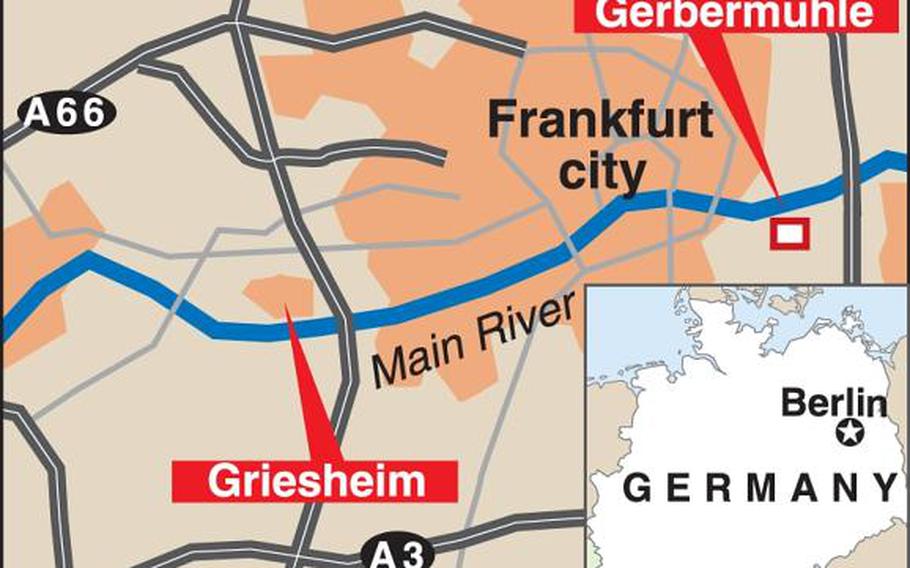 Frankfurt, Germany, has earned the nickname &ldquo;Little Manhattan&rdquo; for its impressive skyline, thriving financial district, reputation as a bustling entertainment and culture center and its setting on the Main River.

Although strolling through Frankfurt is a good way to immerse yourself in the city&rsquo;s cultural vibe, a cruise along the river is a relaxing alternative for taking in the landscape and surrounding neighborhoods.

Most people in the area think of the mighty Rhine with its castles and lush, green hillsides as an ideal river cruise. But with some of Europe&rsquo;s tallest buildings and unique history along its banks, the Main has plenty to offer as well.

Primus-Linie has a fleet of five boats that take visitors on a 100-minute cruise of the Main, focusing on Frankfurt and its suburbs. After buying my ticket at the picturesque Eiserner Steg bridge, I boarded the cruiser Nautilus and explored the boat&rsquo;s three decks. There are 380 indoor seats and 200 seats on the sun deck, according to a company brochure.

I was glad I was near the front of the line when I boarded. A warm spring day on a German holiday meant the upper sun deck seats filled quickly. After selecting my seat on the sun deck, I ordered a drink from the waiter and settled in for some relaxing sightseeing.

The cruise is broken into two parts &mdash; the historic Gerberm&uuml;hle (tanner&rsquo;s mill) and the neighborhood of Griesheim. Tickets are available for just half of the trip for those who don&rsquo;t want to spend a full 100 minutes on a boat. If you want to take a 50-minute cruise, the Griesheim portion is highly recommended.

This cruise takes passengers through the urban areas of Frankfurt toward the Western Harbor. A recording, played through a speaker system, points out landmarks and interesting facts about what you&rsquo;re seeing. The recording is easy to hear and is in German and English.

Some of the more interesting sights are the medieval R&ouml;mer building, which has served as the city hall for roughly 600 years, and the Westhafen Tower. Residents have dubbed this 30-floor structure made up of 3,500 glass triangles &ldquo;the world&rsquo;s tallest apple-wine glass.&rdquo; The building really does resemble a glass used to consume apple wine, a drink the city is known for.

Urban landscape isn&rsquo;t all that&rsquo;s offered on the cruise. The green riverbanks attract sunbathers who wave as the boat glides by.

The Gerberm&uuml;hle cruise takes passengers to the Eastern Harbor, where the boat cruises as far as the Offenbach lock, past industrial scenery. This leg, however, does take passengers past the impressive Literaturhaus cultural center and the city&rsquo;s centuries-old Sachsenhausen district, famous for its lively night life.

Although the Gerberm&uuml;hle part of the cruise wasn&rsquo;t as impressive to me, the view of the skyline on the way back to Eiserner Steg is definitely one you&rsquo;ll want to have the camera ready for, as the high-rise buildings and the breathtaking Dom, or cathedral, are picture-worthy.