Buy Photo
To get into the baptistery next to the cathedral of Santa Mara del Fiore in Florence, Italy, visitors have to enter through bronze doors. But inside, it’s gold that catches the eye. Biblical scenes are offset by gold on a striking ceiling. (Kent Harris /Stars and Stripes)

Buy Photo
To get into the baptistery next to the cathedral of Santa Mara del Fiore in Florence, Italy, visitors have to enter through bronze doors. But inside, it’s gold that catches the eye. Biblical scenes are offset by gold on a striking ceiling. (Kent Harris /Stars and Stripes) 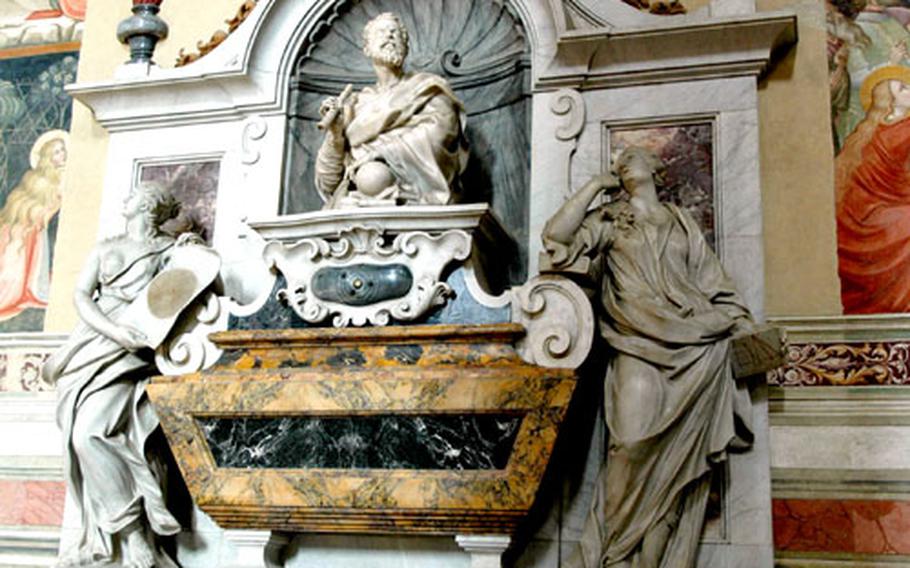 Buy Photo
The dome of the Santa Maria del Fiore in Florence can be seen for miles and is the most-famous symbol from a city that boasts some of the most prized artwork in the world. (Kent Harris /Stars and Stripes) 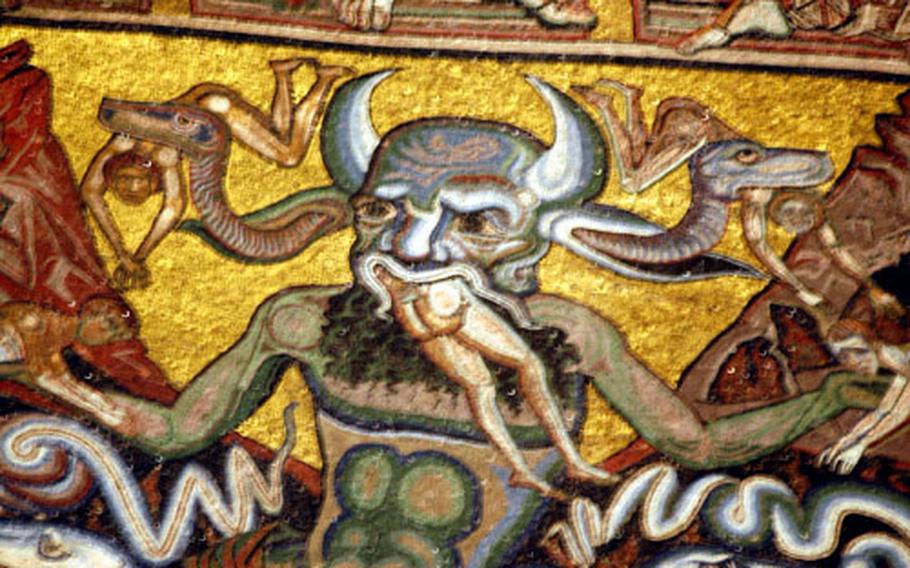 Buy Photo
Those who visit the Baptistery of the Santa Maria del Fiore can see from this painting on the ceiling what might happen to those who don’t follow church teachings. (Kent Harris /Stars and Stripes) Buy Photo
One of three carved lions outside the Santa Croce Basilica in Florence. (Kent Harris /Stars and Stripes)

In the States, churches are primarily places of worship. In Europe, it&rsquo;s a little more complicated.

In Italy, where many structures are hundreds of years old, they often serve as tourist destinations. That&rsquo;s certainly the case in Florence, which boasts some of the most famous art in the world &mdash; works that are not limited to Michelangelo&rsquo;s &ldquo;David&rdquo; or the paintings in the Uffizi Gallery.

The city&rsquo;s three basilicas and cathedral were designed partly to inspire awe in worshippers. Centuries later, they still do. Here&rsquo;s a quick guide.

Starting at the main train station, visit the church that shares its name: Santa Maria Novella. Exit the station to the left of the platforms, take an immediate right and follow the via Degli Avelli to the piazza with the same name as the church and station.

Walk to the middle of the piazza &mdash; keeping a wary eye out for dive-bombing pigeons &mdash; to get a good view of the facade. The entrance is to the right of the main door through a walled courtyard.

Santa Maria Novella was founded by the Dominican order. Numerous Italian artists contributed work inside. Notice the six smaller altars to each side, each with a painting above it. The exception is the painting of an altar opposite the doorway. The frescoes above and behind the main altar are the most impressive.

Walk about 15 minutes back through the piazza and travel to the Basilica of Santa Croce. The easiest way is to take via dei Banchi (which turns into via de&rsquo; Cerretani) to the cathedral square. Head south on via dei Calzaiuoli to Piazza della Signoria, where the tourists swarm near the Uffizi. From there, take Borgo di Greci to the Piazza di Santa Croce and the basilica.

The facade is impressive, but many visitors come to see the interior of the church and its longtime residents. Much of the interior is undergoing restoration. But the tombs of several famous Italians &mdash; Michelangelo, Machiavelli, Galileo and Rossini among them &mdash; can still be seen around the church.

Returning to the cathedral square, climb the 441 steps of Giotto&rsquo;s Campanile (the bell tower) to take advantage of what many believe is the best view of the city.

The exteriors of the Cathedral of Santa Maria del Fiore, bell tower and Bapistery of San Giovanni are all covered in white and green marble with splotches of red. The bell tower and parts of the cathedral have been cleaned recently. Notice the difference in the parts that haven&rsquo;t.

The baptistery&rsquo;s selling point is its ceiling: frescoes from biblical scenes surrounded by gold.

A few blocks to the north along Borgo San Lorenzo, sits the basilica of the same name. Originally the city&rsquo;s cathedral, San Lorenzo offers less to see than the other three. The outside is bare bones by comparison and the inside is modern looking, with white walls and gray pillars. The many-hued marble altar is the high point.

Return to the train station (and a more materialistic world), through alleys filled with souvenirs, cafes and other tourist fare.

On the QTDIRECTIONS: Florence is off the A1 autostrada connecting Milan and Rome. It&rsquo;s about a three-hour drive from Aviano, slightly less from Vicenza and slightly more from Naples. Parking (and driving) in Florence isn&rsquo;t fun, so take the train. It&rsquo;ll likely take several hours longer, but the hassle is less when you arrive. It&rsquo;s a little more than an hour&rsquo;s train ride (5.20 euros one way) from Pisa and Camp Darby.

COSTS: No admission charged for religious services at any site. The cathedral is free, but it costs 6 euros to climb the bell tower and 3 euros to enter the baptistery. San Lorenzo and Santa Croce each charge 2.50 euros for admission. Santa Croce has a 4-euro fee.