Find a thrill in canyoning, rafting and nature tours in Japan Canyons Tours can accommodate individuals and large groups. All tours are available in both English and Japanese. Most tours are physically challenging. (Eric Guzman/Stars and Stripes)

Canyons Tours can accommodate individuals and large groups. All tours are available in both English and Japanese. Most tours are physically challenging. (Eric Guzman/Stars and Stripes) 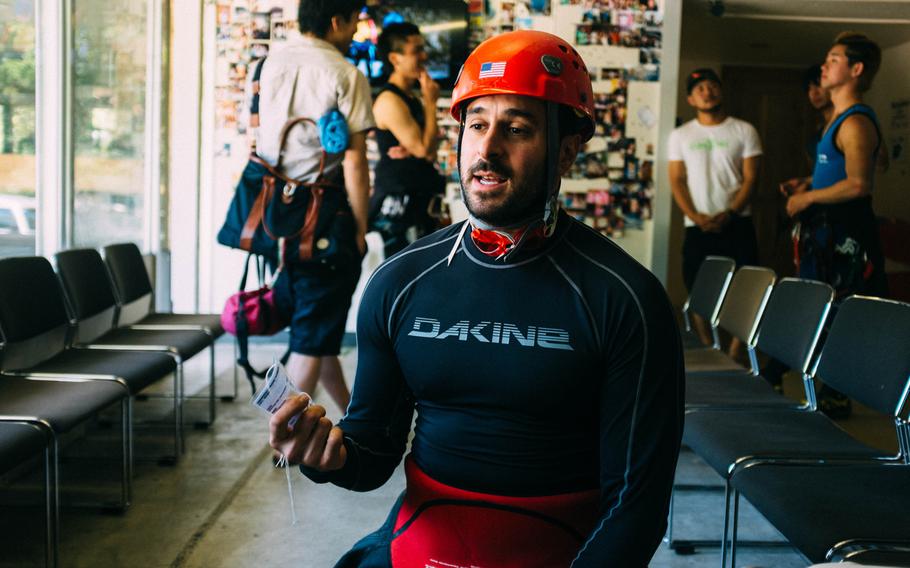 Canyons tour guides give visitors an overview of the day's events before they start to avoid any surprises. Everything from the gear to be used to the weather is discussed before the tour begins. (Eric Guzman/Stars and Stripes) 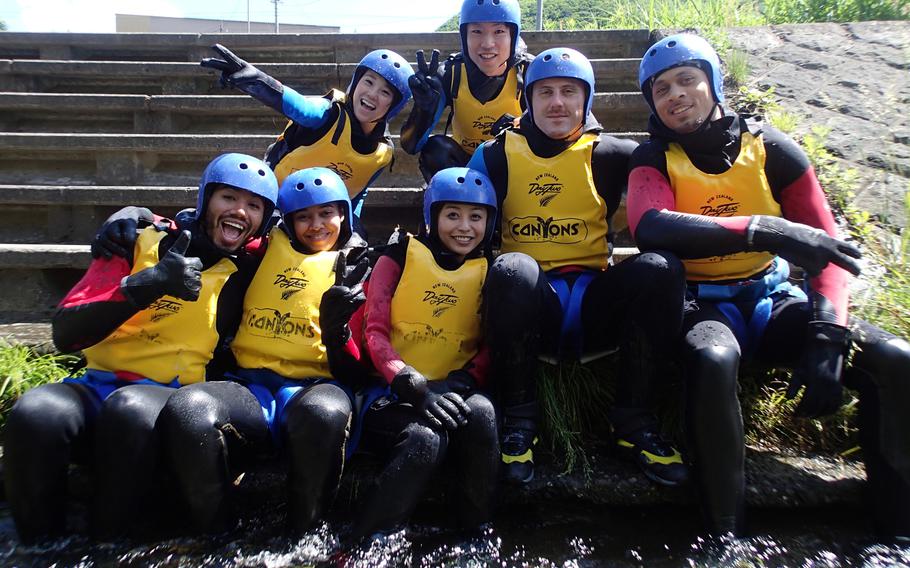 A tour group poses with satisfied smiles after a day of canyoning in Gunma, Japan. (Eric Guzman/Stars and Stripes) 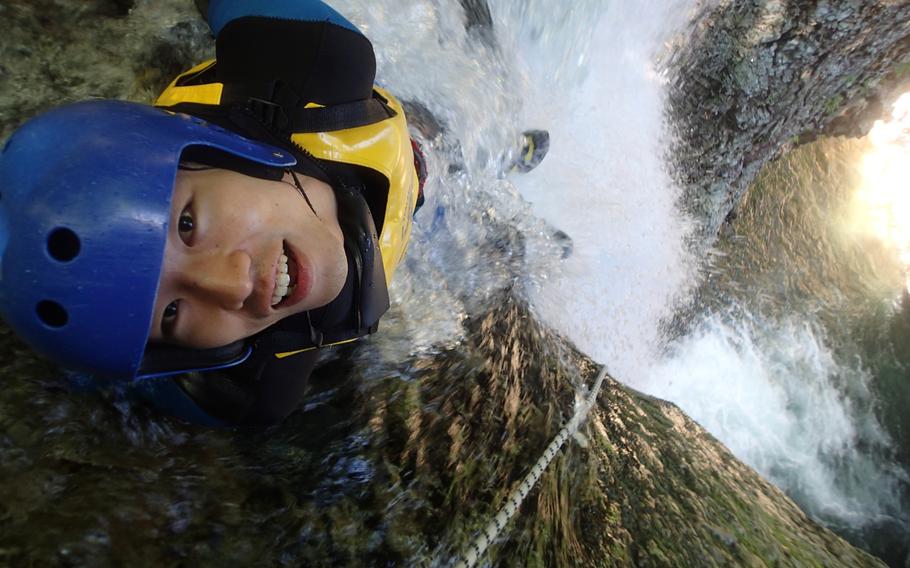 A Japanese thrill-seeker gets ready to slide down a waterfall during a canyoning tour in Gunma, Japan. Adventurers can chose between canyoning, rafting and nature tours. (Eric Guzman/Stars and Stripes) 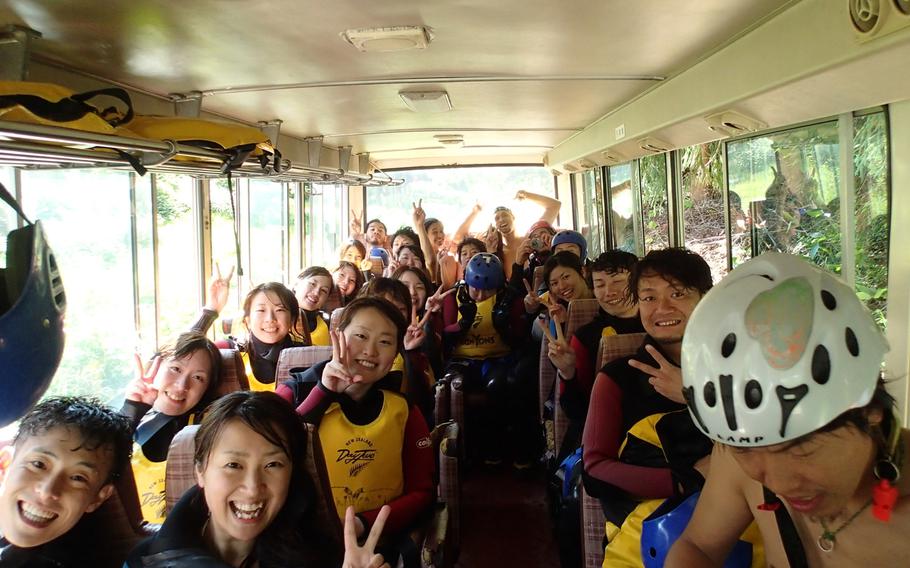 A busload of adventurers are all smiles following their day of canyoning in Gunma, Japan, about an hour north of Tokyo. Tours start at about $80 a person. (Eric Guzman/Stars and Stripes)

If you need to get away from the electronic buzz of downtown Tokyo, head north.

Just one hour from Tokyo station via the bullet train, Japan’s Canyons Tours offer canyoning, rafting, and nature tours — a perfect way to escape the city and the August heat, all while spending some refreshing time in the woods.

Half-day and full-day tours of varying degrees of thrill and physical difficulty are available, depending on your sense of adventure.

The action-packed Fox Canyon tour — the most popular tour package — runs for half of a day and consists of several water obstacles, most notably a 20-meter waterfall jump that’s sure to give any adrenaline junkie his or her fix for the day.

The Fox Canyon tour begins with a quick safety speech, and is followed by a backward float down a one-meter drop to get participants used to the water’s temperature and the sensation of falling — something that will come in handy in the not too distant future.

After a series of smaller drops and rock slides, participants reach the 20-meter waterfall. The instructors are very reassuring and are quick to calm any guests concerned with making the plunge.

Though it seems to last forever, the fall isn’t as bad as one might think. Apart from dangling over the edge of the waterfall by a rope for a moment, it’s over pretty quickly.

Back at the base camp, there are freshly grilled foods, soft drinks and beers available for purchase. The ribs are top notch and a very welcome sight after a day of exhausting canyoning.

Some groups tackle the course in a very entertaining mix of English and Japanese speakers, communicating in yelps and gargles as the water tosses them about, but there are always instructors that speak either language attached to each group.

Wearing a swimsuit is encouraged, and a combination of goggles and contact lenses is recommended over wearing eyeglasses.

Changing rooms are open areas with benches and wall lockers, and the showers are communal with no walls. Bring your own towels.

The price of the tour includes gear rentals, a tour guide, a group photo and insurance.

Tours can accommodate groups as small as two people and as large as 24. Participants must be age 13 or older.

By train, Tokyo Station to Jomo-Kogen Station. A shuttle is available from the train station. There also is free parking.

TIMES Canyoning season begins April 26 and ends October 27. Canyon Tours' website mentions September as ideal because it is after the storm season but is still relatively warm.

NOTE The trips are physically demanding as most require a lenghty hike to access the start of the canyon. For safety reasons, pregnant women are not allowed on the tours.

Triumphant tour members mug for the camera on a bus, above, and in the water after a day of canyoning in Gunma, Japan.

Canyons tour guides give visitors an overview of the day’s events to avoid any surprises.