Eschwege: Straight off the pages of a fairy tale 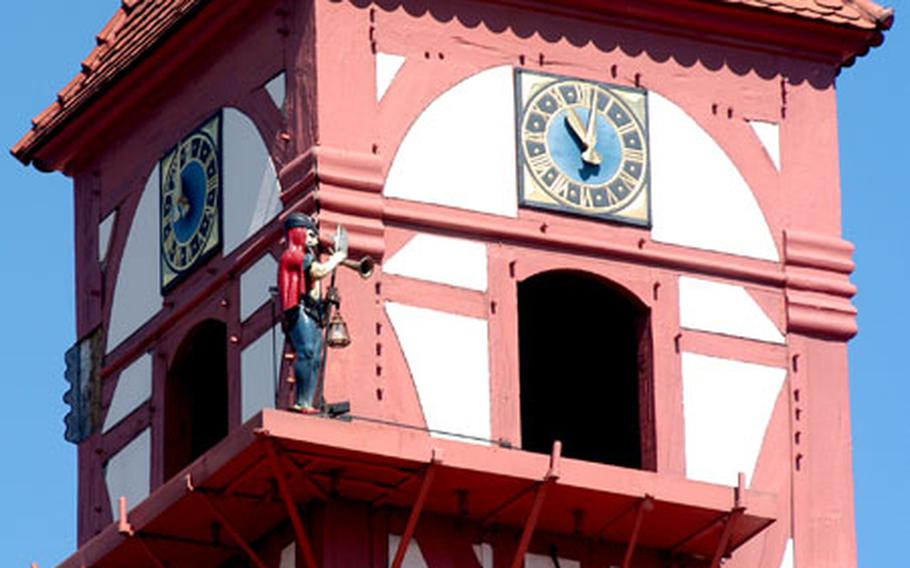 The “Dietemann,” the symbol of Eschwege, Germany, makes his hourly march around the tower of the landgrave palace, where he stops twice to blow his horn. (Michael Abrams / S&S)

The “Dietemann,” the symbol of Eschwege, Germany, makes his hourly march around the tower of the landgrave palace, where he stops twice to blow his horn. (Michael Abrams / S&S) 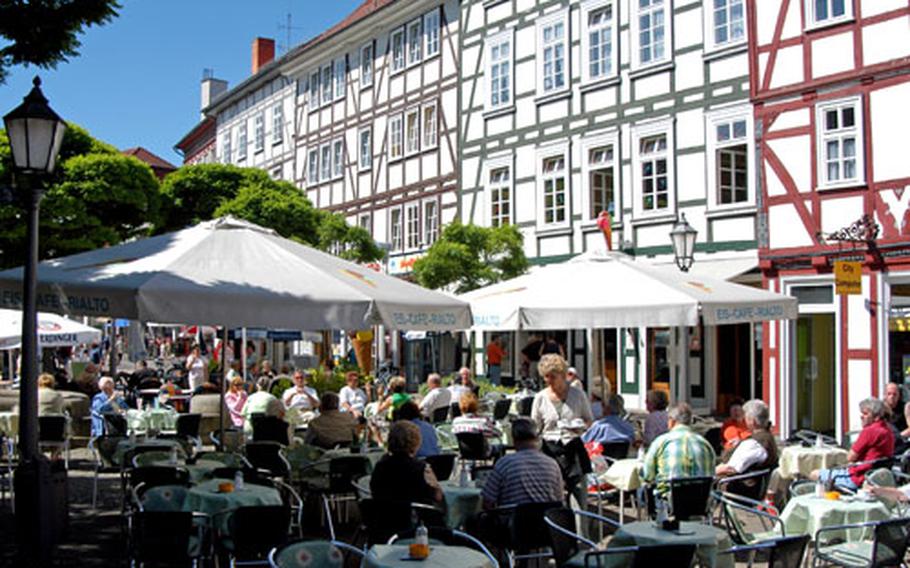 Don’t miss having a coffee — or a locally brewed beer — at one of the cafes on Stad, one of Eschwege’s main pedestian shopping streets. (Michael Abrams / S&S) 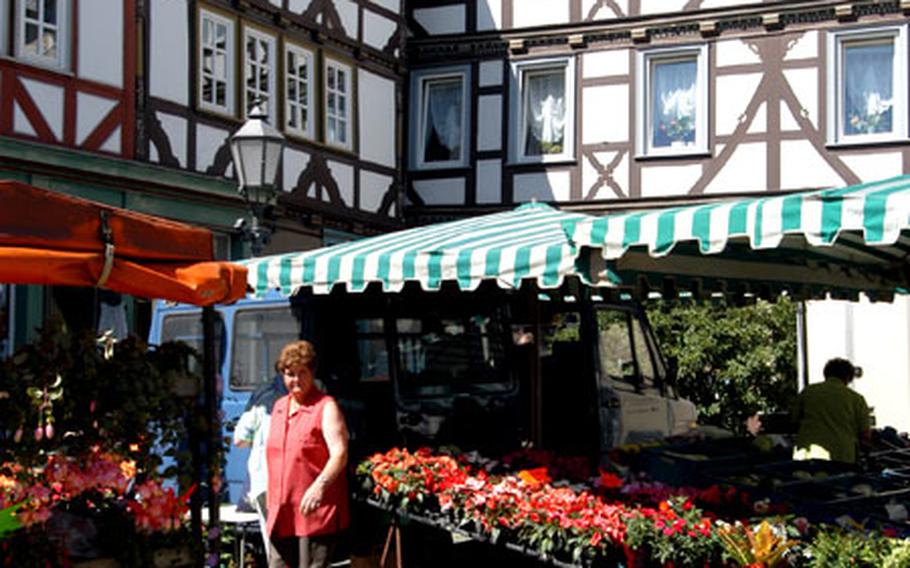 A stand full of flowers on the Eschwege Marktplatz fills the Saturday market with color and fragrance. (Michael Abrams / S&S) 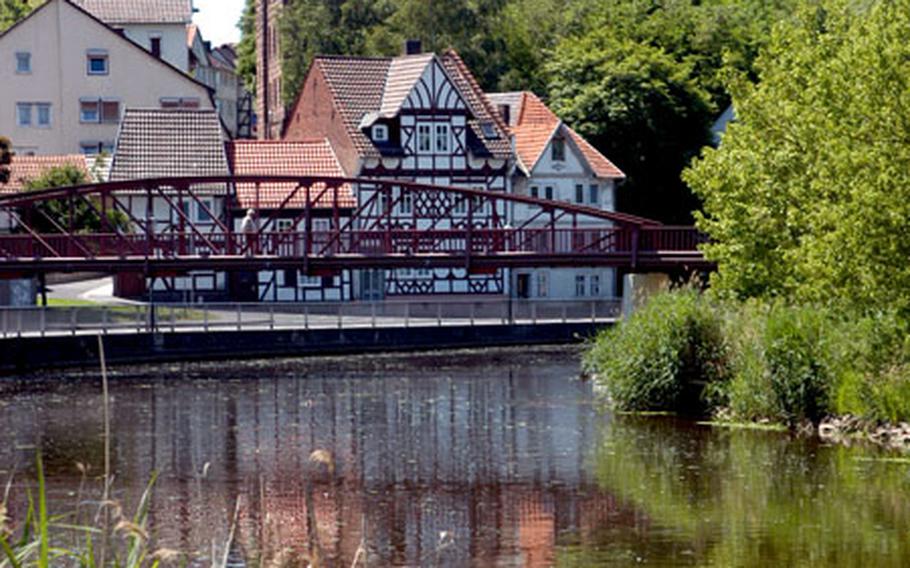 The Schulberg (school hill) and houses on the bank of the Werra are reflected in the river. The tower at top right is the Karlsturm, sometimes called the black tower. (Michael Abrams / S&S) 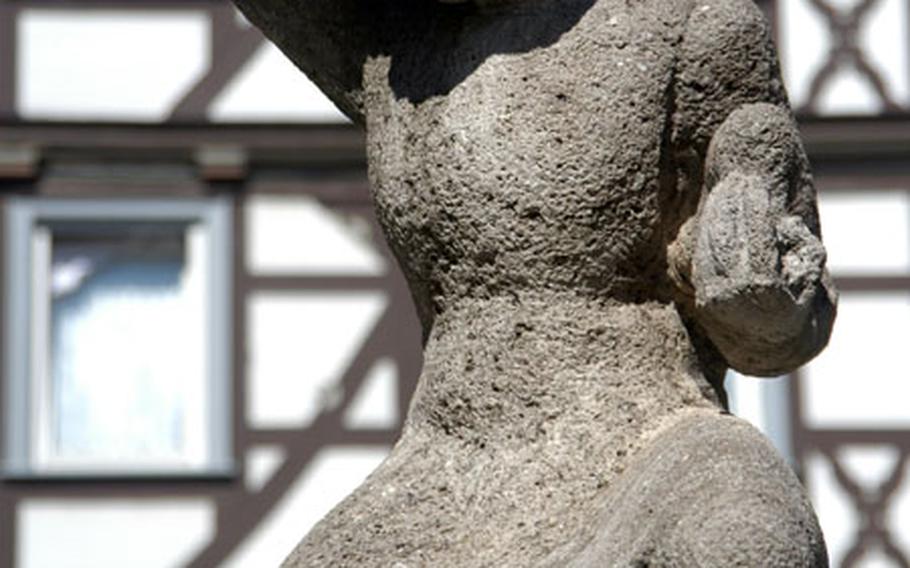 The Schuster-Jobst fountain on Eschwege’s marketplace, seems to be a shoemaker who is wondering what he is doing. (Michael Abrams / S&S)

Just off Germany&rsquo;s famed Fairy Tale Road, Eschwege is quite a fairy-tale town itself.

With its half-timbered houses, small squares, narrow lanes and a night watchman who blows his horn hourly from a palace tower, Eschwege could be a place straight from the pens of the Brothers Grimm.

Before we go any further, I must admit that I have a personal reason for liking Eschwege so much. My wife was born and raised here. And through the years, she and her parents have told me much of the history of this more than 1,000-year-old town.

Stories of almost crossing into East Germany by mistake, when the Iron Curtain ran just a few miles from here, or about the day when the Americans rolled into town in World War II, and about the great-grandfather who was once a night watchman.

The night watchman who makes the rounds today is a mechanical figure. It is part of the clock tower on the landgrave palace.

He is called the Dietemann. Diete is old slang for tooting, and that&rsquo;s just what the symbol of Eschwege does. He toots his horn twice as he makes his way half way around the tower every hour on the hour. By the way, citizens of Eschwege are called Dietem&auml;nner.

A watchman was once an important job, as this town on the Werra River, and near or on major east-west and north-south trade routes, has changed hands many times and seen many conquerors roll through it. The Hessians, Brunswickers and Thuringians have contested the town over its millennium. Not to mention the Croatian troops who burned and sacked it during the Thirty Years War, or the Americans liberators of 1945.

Luckily, Eschwege didn&rsquo;t suffer the heavy Allied bombing of the war, as Kassel and other nearby cities did, and many of its historical buildings have survived.

The Cold War cast its shadow heavily on the town. With the Iron Curtain running nearby, it was the end of the Western world. There was not much business investment in a place so close to East Germany, so most of the young people had to move west for jobs. When the Iron Curtain fell, it didn&rsquo;t help much either. Government subsidies stopped, East Germans headed west, and businesses headed east to take advantage of cheaper labor.

The depressed economy has not, however, made Eschwege a less nice place to visit.

Almost all of it can be seen on foot. To start, walk past the 17th-century town hall on the Marktplatz, where there is a market Wednesday and Saturday mornings. Check out the carved figures adorning its walls. On Stad, Eschwege&rsquo;s wide pedestrian shopping street, see the Raiffeisenhaus, a tall, beautiful, richly decorated half-timbered house. Half-timbered houses are one thing there is no shortages of here, with rows of them lining the streets.

Be sure to see the Dietemann at the top of the hour. The best place to watch him toot his horn is across from the palace at the end of Forstgasse.

In the courtyard of the 16th-century palace is a fountain adorned with scenes from fairy tales.

When you tire from the walking, rest your feet at one of the many restaurants or cafes that line the lanes. Have an Eschweger Klosterbr&auml;u beer, brewed in town at the brewery on Hospitalsplatz, where the tourist information office also is located. An Augustinian monastery was once located there, and the remains of its church, the Hospitalkapelle, can still be seen.

Nearby is the interesting Zinnfigurenmuseum, housed in one of Eschwege&rsquo;s oldest buildings. Filled with dioramas, it has about 5,000 years of the area&rsquo;s history made of little pewter figures, including one of the 1637 sacking of the city.

Look for signs pointing to the Nikolaiturm, a 12th-century former church tower, where after climbing its 151 steps you have a great view of Eschwege, the countryside and the Werra River valley.

The towering church steeple visible from here is the Neust&auml;dter Kirche on Neustadt street. Meaning new city, it is a bit of a misnomer, as the church was built in the 14th and 15th centuries. But back then, it was outside the old town walls.

At the end of Neustadt is the D&uuml;nzebacher Tor, the last of the city&rsquo;s defensive towers still standing.

Stroll back across town, and walk up the hill, known as the Schulberg for the school on it. Along with the school, there is the 16th-century Hochzeitshaus (or wedding house) and the Karlsturm. It was built in the 12th century, and was once one of twin church towers and is the town&rsquo;s oldest building.

From the Schulberg there is another view of the Werra valley, a great place to bike through the countryside to other places along the river.

With all its sights, old town flair &mdash; and yes &mdash; beer, it is more than an affair of the heart that makes Eschwege one of my favorite German towns.

Know and goGetting there: Eschwege is in north central Germany, about 125 miles northeast of Frankfurt and about 35 miles east of Kassel.

Where to stay: In addition to its hotels, Eschwege has a youth hostel and campgrounds.

Food and drink: In addition to the beer, try a bratwurst while you&rsquo;re there. They are some of the best in Germany.

What to see: The Zinnfigurenmuseum, at Hospitalstrasse 7 is open 2-5 p.m. on Wednesday, Saturday and Sunday. Entrance fee is 2 euros for adults and 1 euro for children 7 and older.

More information: Eschwege&rsquo;s German-only Web site is www.eschwege.de. The tourist office is at Hospitalplatz 8, and is open 9 a.m. to 6 p.m. Monday through Friday, and 9 a.m. to noon on Saturdays from May through September. It is open 9 a.m. to 4:30 p.m. the rest of the year. Its telephone number is (+49) (0) 5651-19433 and its e-mail address is tourist-info@werratal-tourismus.de.