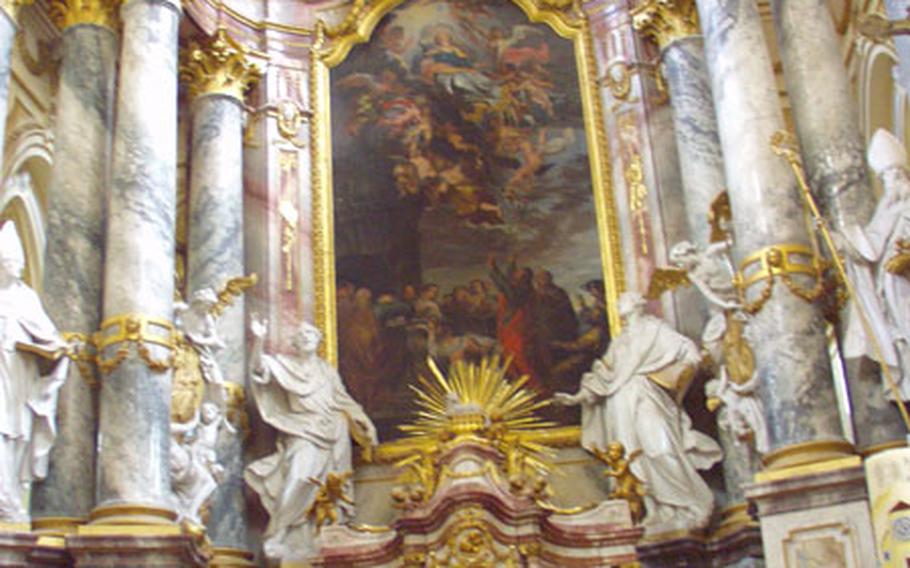 Although the Ebrach Abbey Church is of Gothic architecture, the altars date from the Baroque and neoclassical periods of the 17th and 18th centuries and are resplendent with marble and gold leaf. (Steve Liewer / S&S)

Although the Ebrach Abbey Church is of Gothic architecture, the altars date from the Baroque and neoclassical periods of the 17th and 18th centuries and are resplendent with marble and gold leaf. (Steve Liewer / S&S) 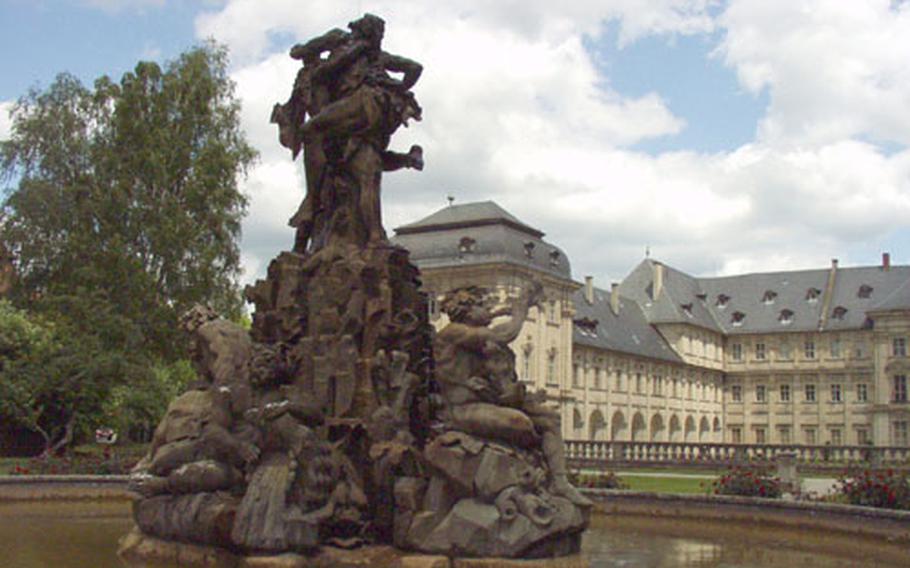 The fountain of the Greek mythological heroes Hercules and Anteus, stands in the garden outside the monastery at Ebrach, Germany, and was built between 1744 and 1747. (Steve Liewer / S&S) 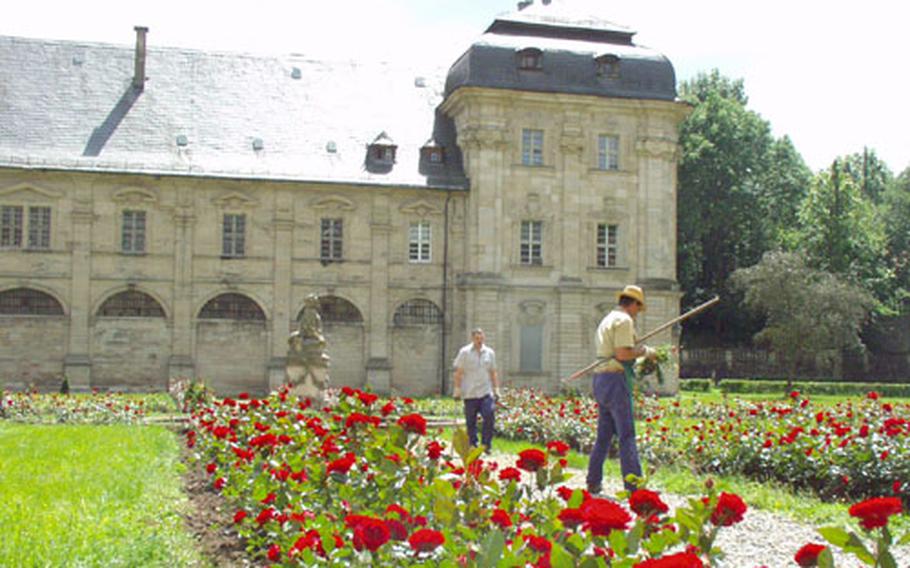 Workers tend the rose gardens in the courtyard of the Baroque monastery at Ebrach, Germany. (Steve Liewer / S&S) 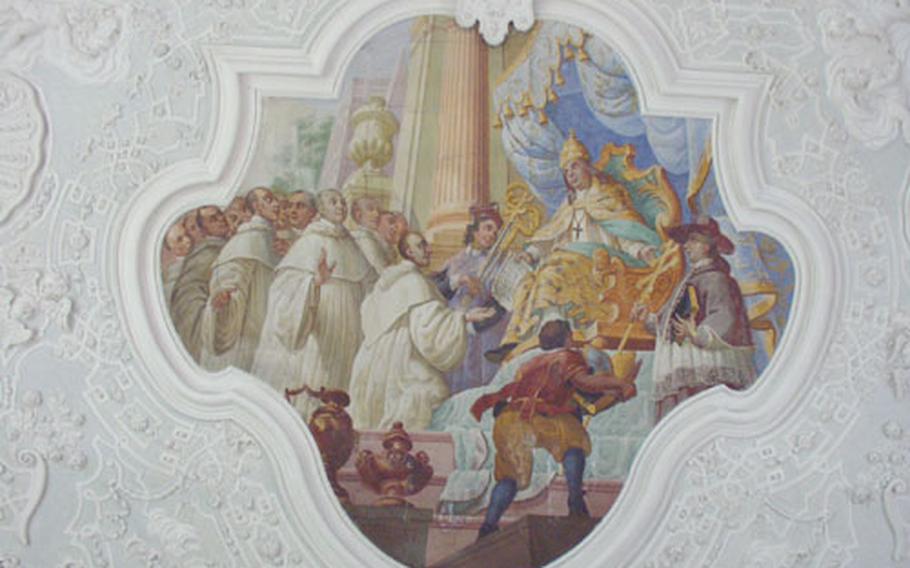 The frescoes on the walls and ceilings of the monastery at Ebrach, Germany, were painted in the early 18th century and are reminiscent of the works of Tiepolo in the famous Residenz palace at Würzburg, 28 miles away. (Steve Liewer / S&S)

Were the 12th-century Cistercian monk Berno to come down out of the hills into the village of Ebrach and stroll the grounds of the abbey he founded 870 years ago, he&rsquo;d likely gape in horror at the spectacle so beautiful to modern eyes.

Berno and his little band of brothers left France for this isolated valley in the heart of the dark forest of the Steigerwald to regain a simplicity, an isolation he thought the modern world had lost. They founded their order&rsquo;s first monastery in the Franconian region of northern Bavaria.

The simple church he consecrated in 1134 is gone. But the cathedral that followed, the foundation stone of which was laid on July 4, 1200, remains and is considered one of Germany&rsquo;s most important buildings of early Gothic architecture.

Over the centuries, through periods of destruction and construction, the abbey expanded into a walled stone city filled with colorful gardens and buildings decorated in the ornate Baroque and neoclassical (think of France&rsquo;s Louis XVI) style.

The church&rsquo;s most famous feature is the giant wheel-shaped stained-glass window on its western wall. The western entrance is closed for renovation, so the current entry is from the back (east) side, behind the massive altar. Visitors can sit in the choir seats and look up at the massive, marvelous Baroque and Rococo altars built in the 17th and 18th centuries.

Across the parking lot is the monastery, with its carefully tended rose gardens inside a courtyard. The abbey resembles the Residenz, W&uuml;rzburg&rsquo;s famous Baroque palace 28 miles away.

Though much restoration work remains to be done (parts of the building still are used as offices, and some of the complex is a juvenile detention facility), two wings are open for viewing, including the ceiling frescoes of the entryway and the mural-studded Kaisersaal, the enormous room where the prince-bishops entertained. The architect Balthasar Neumann, known for his work at the Residenz, is believed to have designed the marble entry stairway.

For those who prefer to wander outdoors, bike and footpaths reach out into the surrounding hills. On the edge of the city is an outdoor swimming pool complex. Here and there are wineries and breweries, keeping up traditions begun by the Cistercians in the Middle Ages.

Ebrach is certainly far from the village Berno and his followers may have imagined when they settled in Germany for a life of prayer and contemplation almost a millennium ago. But in one little village, it captures most of the things modern Germans &mdash; and American expatriots &mdash; love best about life in Franconia.

Directions: Ebrach, Germany, is 28 miles east of W&uuml;rzburg on highway B22. If you&rsquo;re in a hurry, take Autobahn 3 and get off at the Geiselwind exit. From Geiselwind, follow the signs five miles north to Ebrach.

If you&rsquo;ve got some extra time, take the scenic B22 all the way from W&uuml;rzburg or Kitzingen. It winds through hills of rolling farmland and the Steigerwald Naturpark, a German national park and forest.

Cost: Two euros per person for the monastery tour (in German only, but a guide will answer questions in English); 1 euro per person for a self-guided tour of church. The English guidebook sold for 1 euro at the church is highly recommended.

Food: There are numerous caf&eacute;s and restaurants in Ebrach just outside the abbey complex. Several park benches lend themselves to picnic lunches in the gardens outside.