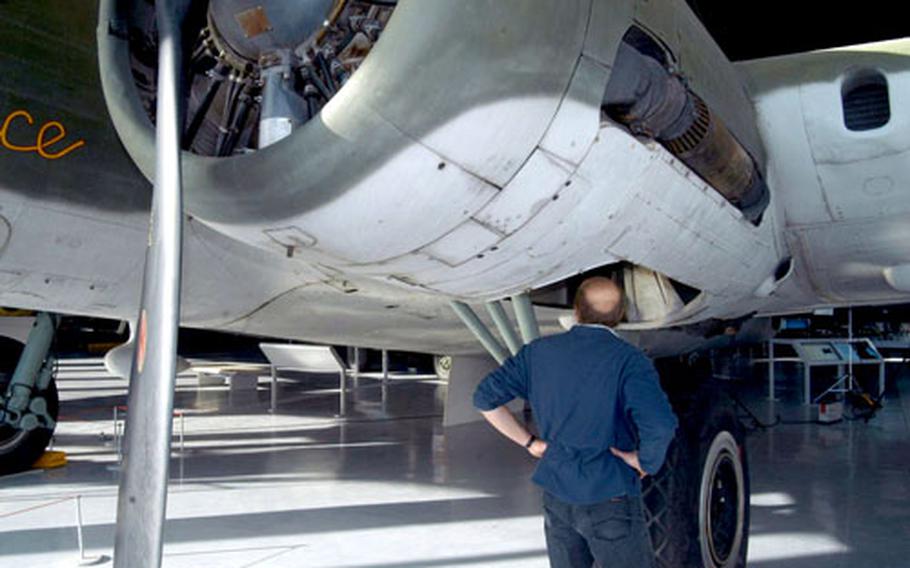 A visitor to the American Air Museum gets a close look at a B-17 Flying Fortress. (Ron Jensen / S&S)

A visitor to the American Air Museum gets a close look at a B-17 Flying Fortress. (Ron Jensen / S&S) 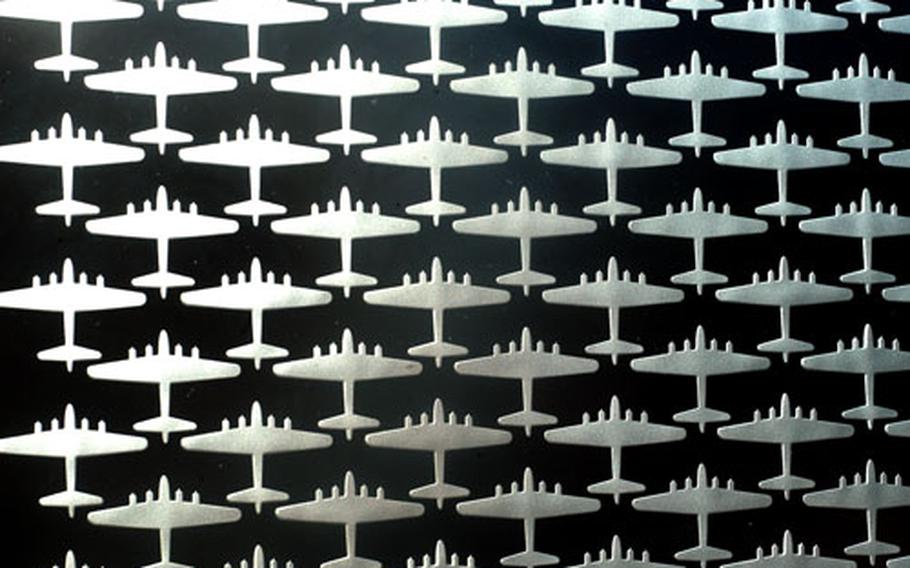 Outside the museum, a panel shows images of American aircraft flown from England during World War II — each one stands for a lost aircraft and crew. (Ron Jensen / S&S) 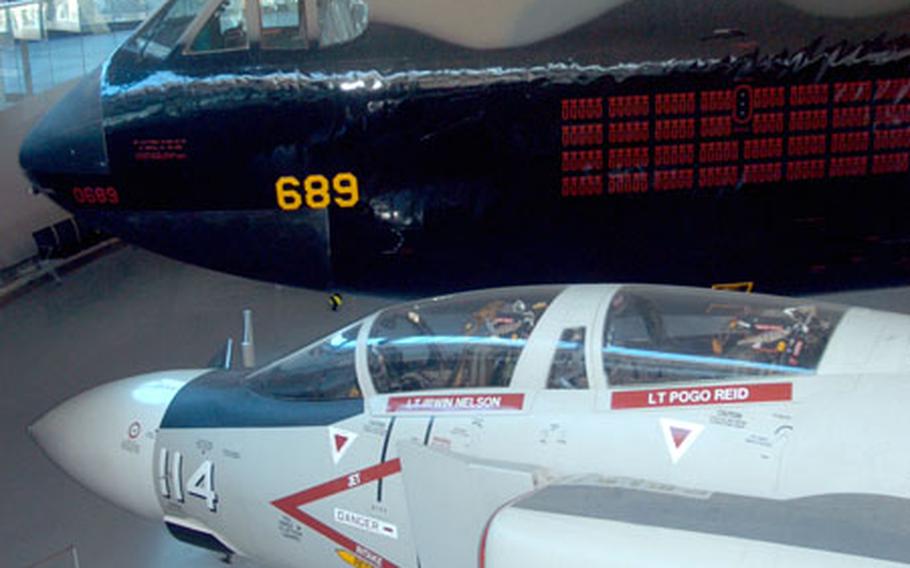 An F-4J Phantom II, foreground, sits near a B-52D Stratofortress at the American War Museum in Duxford, England, part of the Imperial War Museum. Flying above in the background is a replica of a Spad S-13, a French fighter used by American fliers in World War I. (Ron Jensen / S&S)

The American Air Museum is a lasting memorial to the 30,000 airmen who lost their lives flying from British air bases during World War II.

It is on the grounds of the Imperial War Museum Duxford, an air base that was integral to the defeat of Nazi Germany 60 years ago. U.S. fliers flew P-47 Thunderbolts and P-51 Mustangs from the base. When the museum opened in 1997, the queen of England was among those in attendance, reflecting its importance to the British.

Inside the building, which has gained international attention and awards for its design, sits America&rsquo;s air heritage. There are almost 20 aircraft, including a UH-1 Huey helicopter, jumbled together like a giant jigsaw puzzle. Some planes hang from the building&rsquo;s curved roof. Others are clustered together like chicks in a barnyard.

A B-52 Stratofortress, for example, seems to cradle an F-4J Phantom II jet to its side. A Grumman TBM-3 Avenger appears to soar protectively over a B-17 Flying Fortress.

The Navy Avenger is painted like the one flown by President George H.W. Bush during World War II. The former president visited the museum in 2002 for a rededication ceremony, smiling wide as he looked up at the plane bearing the name Barbara.

The planes range from a Spad S-13, a French fighter flown by American aviators during World War I, to aircraft such as the A-10 Thunderbolt, which attacked Iraqi tanks in Kuwait during Operation Desert Storm.

The centerpiece is the B-52D, which is an awesome presence in the museum.

Peter Murton, a historian at the museum, expressed regret that planes such as the B-52 have to be stored indoors among the other aircraft. It looks &ldquo;a hell of a lot better&rdquo; outside where its size can be appreciated, he said.

But, he said, England&rsquo;s damp, chilly climate is not hospitable to aircraft. The climate-controlled museum is a better place for these historic machines.

Another highlight is the Georgia Frontiere Gallery, named for the American woman who owns the St. Louis Rams football team. She has been a generous supporter of the museum, which still receives most of its funding from Americans.

The museum continues to seek financial supporters. Information on how to contribute and the benefits of that support can be found on the Imperial War Museum Web site.

DIRECTIONS: The Imperial War Museum Duxford is on the A505 just off the M11 south of Cambridge in the direction of Royston. Signs on the M11 make it easy to find. From RAF Alconbury and RAF Molesworth, travel south on the A14 to the M11, continuing south and following the signs. From RAF Mildenhall and RAF Lakenheath, follow A11 south toward Stansted Airport. Follow signs to the A505 and the Imperial War Museum Duxford.

COSTS: Adult admission (ages 19 to 59) is 12 British pounds, about $23; senior citizens 60 and older, 9 pounds; children ages 16-18 are 7 pounds; children ages 15 and younger are admitted free. Admission includes access to the entire Imperial War Museum Duxford, which features scores of aircraft important to the British air heritage, including the British Airways Concorde. A land museum tells the story of the war on the ground with displays of tanks and other vehicles. The Battle of Britain and the D-Day landings at Normandy, France, are also highlighted in museum displays.

FOOD: A cafeteria is available on the museum grounds.INFORMATION: The Web site for the American Air Museum and all the Imperial War Museums is www.iwm.org.uk; phone number is (+44) (0)1223-835-000.