Don't be fooled, there's more to Hakone than meets the eye 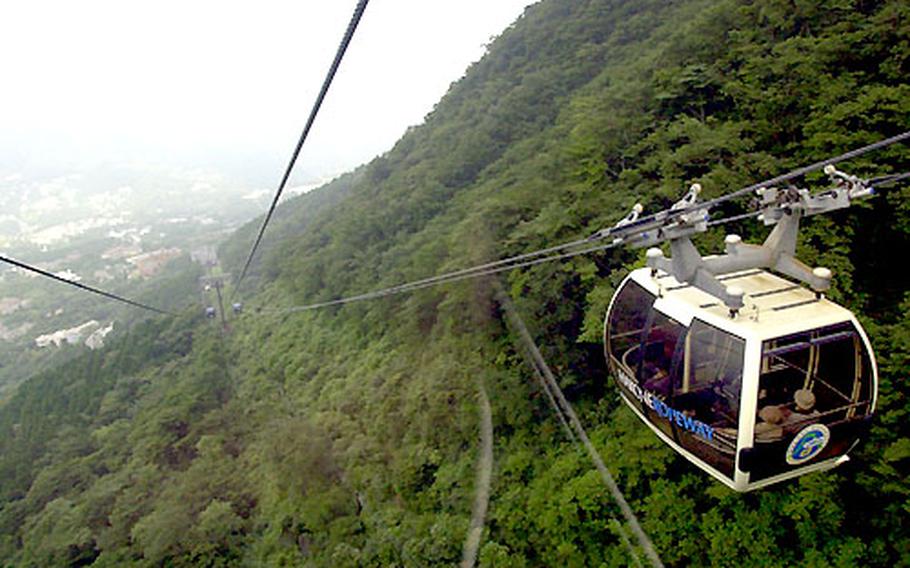 The cars on the ropeway provide a fantastic view of the mountain below. (Jim Schulz / S&S)

The cars on the ropeway provide a fantastic view of the mountain below. (Jim Schulz / S&S) 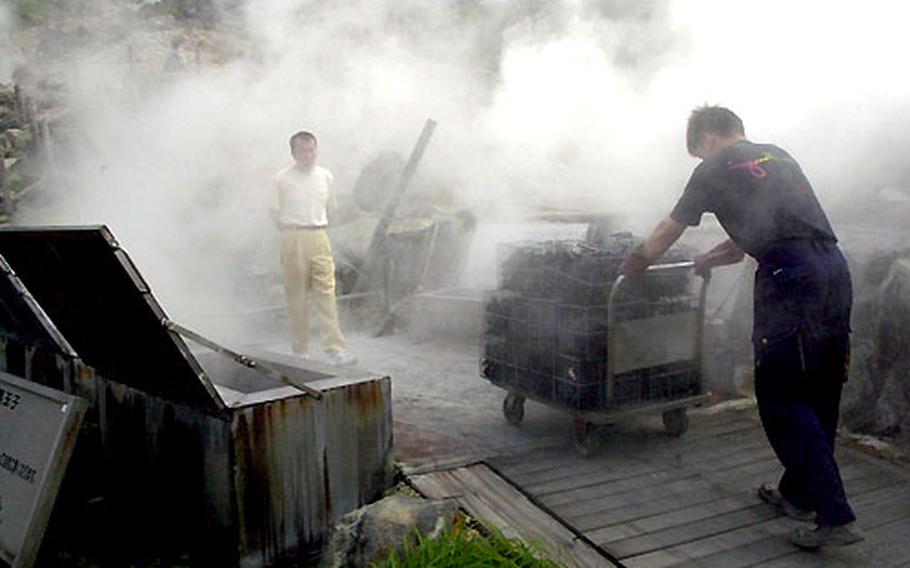 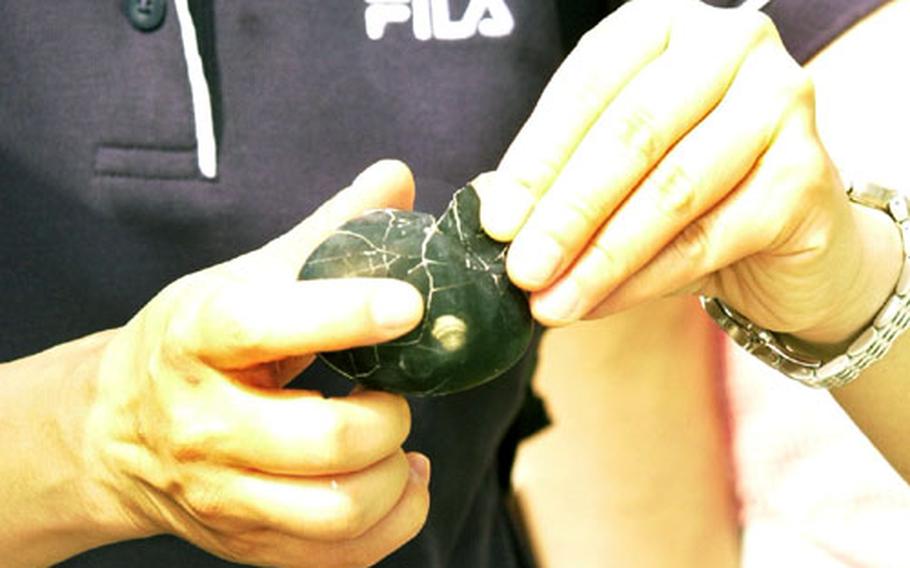 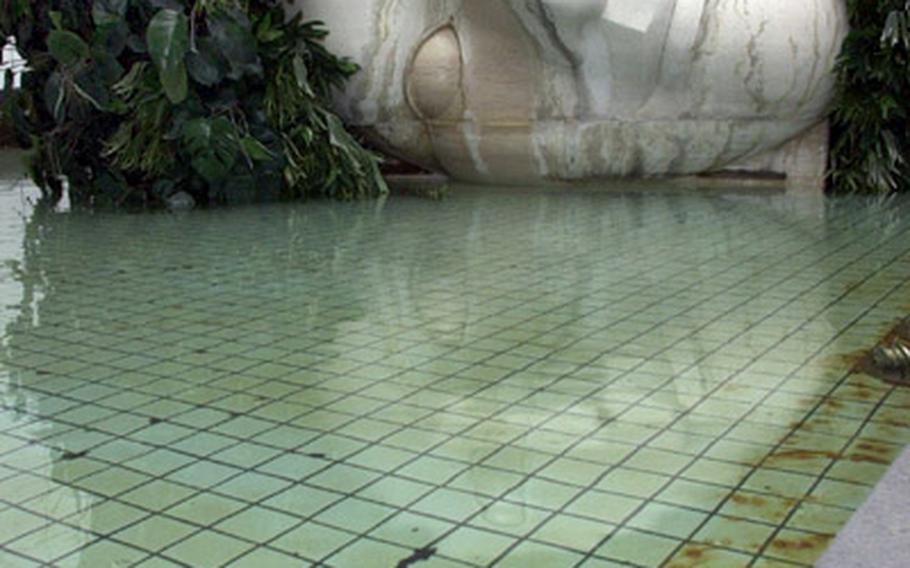 “La Pleureuse,” a woman’s giant face, framed by a crown of fake, green leaves, rests by a pool of water, tears streaming down her cheeks. Legend says she is a narcissist who has fallen in love with her own reflection. (Jim Schulz / S&S) 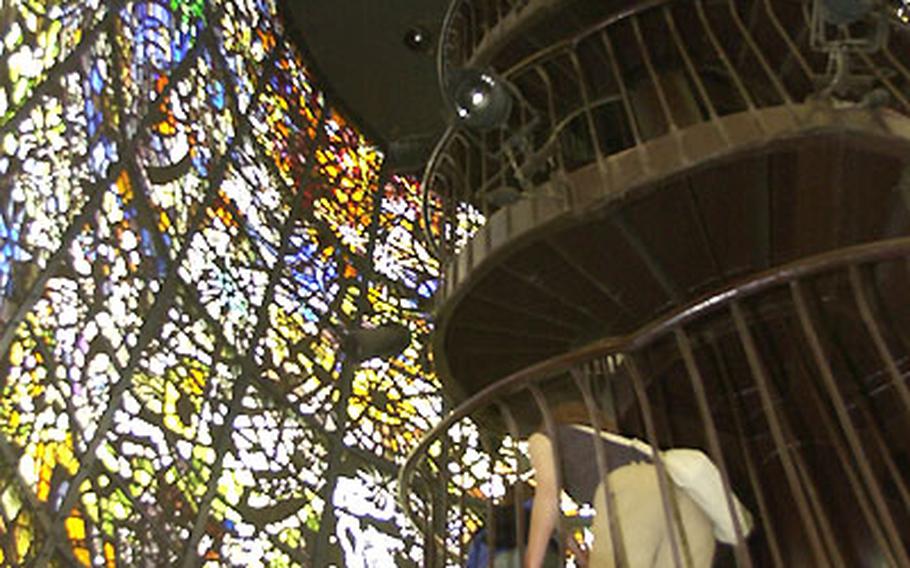 At the Hakone Open Air Museum, the Symphonic Sculpture the spiral staircase is encased in a wall of stained glass. (Jim Schulz / S&S)

HAKONE, Japan &#8212; Biting into a &#8220;black&#8221; egg that&#8217;s hard-boiled in a sulfur spring. Gliding above treetops on a gondola dangling by steel rope. Trekking through dense forest in the shadow of Mount Fuji. Drinking tea at the historic Fujiya Hotel.

Whether you&#8217;re a hiker, a lover of art or just looking for an escape from Tokyo, Hakone offers something for everyone.

A lake-side resort town west of Tokyo, Hakone is tucked into the less-famous mountains near Mount Fuji. It&#8217;s perhaps best known for its numerous hot-spring resorts, but don&#8217;t be deceived: breath-taking views, shopping and other adventures abound beyond the bath.

Kanto Plain residents can make a day-trip out of Hakone, if they arrive early, but a few days are needed to see all the attractions &#8212; and ride the unique modes of transportation, from mountain tram to boat.

A good starting point is the Fujiya Hotel. Built in 1878, the majestic Fujiya is a bit worn at the edges but is still considered one of Japan&#8217;s grandest Western-style hotels. Old black-and-white photos of famous foreign guests, from John Lennon to Helen Keller, line a section of the red-carpeted hallways. A special rate for foreigners starts at about $125 for a single or double room, but ask to stay in the Flower Palace, which costs about $25 more a night and puts you in the heart of the hotel. A special treat is afternoon tea with scones, cinnamon toast and small sandwiches in a cozy lounge overlooking a garden.

Frommer&#8217;s (5th Edition) &#8220;Japan: The Best of Tokyo and the Countryside,&#8221; lists the most important stop on the railway as Chokoku-no-Mori, home of Hakone&#8217;s Open-Air Museum. (Admission 1,400 yen, or about $11.66.) One stop before Gora, the museum is a walking tour past eclectic sculptures and exhibits, from modern to dated, from bizarre to conventional.

One of the more striking works of art is a stone face titled &#8220;La Pleureuse.&#8221; The woman&#8217;s giant face, framed by a crown of fake, green leaves, rests by a pool of water, tears streaming down her cheeks. Legend says she is a narcissist who has fallen in love with her own reflection.

Then it&#8217;s back up the stairs. The museum also has a small building that features some earlier works of Pablo Picasso.

At Sounzan, the adventure begins. There, you board a gondola ferried over mountaintops and into a valley by a steel ropeway. At the ropeway&#8217;s highest point is Ohwakudani, which means &#8220;Great Boiling Valley.&#8221; No wonder: the area features two small mountain peaks smoking with volcanic gas vents. Though the sulfurous gas may smell like rotten eggs, the boiled eggs sold at a hut along one of the trails are quite tasty &#8212; despite the appearance of their shells, turned black by boiling in the bubbling sulfur springs. The eggs are cheap: six for 500 yen (about $4) and Japanese tourists gobble them up. It&#8217;s said that if you eat one egg, you will live seven years longer. The Ohwakudani Nature Trail is about a 30-minute hike, but on a recent July afternoon, the trail was closed due to &#8220;volcanic gas.&#8221;

From Ohwakundani, the ropeway descends to Togendai, where you can take a boat across Lake Ashi and, if you&#8217;re lucky, on a clear day catch a view of Mount Fuji reflected in the water. Two of the boats are replicas of man-of-war pirate ships, while a third is a Mississippi paddleboat replica, according to Frommer&#8217;s. Take note: The ropeway stops running at 5 p.m. in summer and 4 p.m. in winter. Round-trip from Sounzan to Togendai costs 2,340 yen (about $19).

If you tire of sightseeing, there are numerous hikes in the Hakone area. One, listed in Lonely Planet&#8217;s &#8220;Hiking in Japan&#8221; is a four-hour day hike starting in a 500-year-old cedar and pine forest at the Saijo-dera temple in Do-ryoson, and ending near an onsen near Miyagino.

By train: If you plan to spend several days in Hakone, it&#8217;s a good idea to purchase the Hakone Free Pass, which provides a round-trip ticket on the express train from Shinjuku Station to Odawara or Hakone Yumoto, and includes all modes of transportation in Hakone, such as the mountain tram, cable car, ropeway and boat.

The trip from Shinjuku to Odawara takes 1.5 hours, and trains run about every 30 minutes. In Odawara, you transfer to the electric mountain tram, which goes to Gora. Some express trains travel all the way to Hakone Yumoto (about two hours), where you can also board the mountain tram closer to Gora. Both Hakone passes can also be purchased at Odawara (4,130 yen for free pass, 3,410 for weekday pass), and Machida (5,110 yen for free pass, 4,240 yen for weekday pass).

The faster Odakyu Romance Car travels from Shinjuku all the way to Hakone Yumoto, from where you can board the mountain tram to Gora. The trip via romance car costs an extra 870 yen ($7.25, one-way) than the express, and takes about 1.5 hours.

By Car: There are several ways to travel to Hakone by car, depending on from which base you depart. Generally speaking, Hakone is about two hours by car from the Tokyo area. Parking is available for guests at most major resorts, including the Fujiya hotel. There are several parking garages throughout the Hakone area that are easy to spot. Parking is also available at the Hakone Open Air Museum for 500 yen. Check with your local tour office for driving directions.

For more information: In Hakone Yumoto, stop by the Yumoto Tourist Office (0460-5-570; open daily from 9 a.m. to 5:30 p.m.). It&#8217;s staffed by English-speaking volunteers only on weekdays. You can pick up pamphlets on the Hakone area and ask directions. It&#8217;s a two-minute walk from the Hakone Yumoto Station. Take a right out of the station onto the town&#8217;s main street; the office is on the left.

The Fujiya Hotel can be reached at 0460-2-2211. The closest station to the hotel on the Hakone Tozan Railway is Miyanoshita.